The U.S. reported inflation was flat in July, prompting a selloff in the Dollar and a rise in stocks as investors bet the Federal Reserve could ease back on its frantic interest rate hiking cycle.

The Canadian Dollar also sold off as markets bet the Bank of Canada would also now be in a position to ease back on its own rate hiking cycle.

"North of the border, the Bank of Canada will likely take a considerable interest in today’s US CPI report, given that the BoC has arguably aimed to pre-empt the Fed’s hiking cycle," says Simon Harvey, Head of FX Analysis at Monex Europe.

The Bank of Canada and other central banks have had to keep one eye on the Fed when conducting their own interest rate policies, largely to ensure their own currencies remain competitive with the greenback.

"With the next BoC meeting scheduled on September 7, two weeks before the Fed’s September 21 meeting, successfully pre-empting the Fed move gives the BoC the substantial benefit of demonstrating its independence by acting first while doing so at the lowest cost, since it only needs to match the policy of its southern neighbour. Today’s report makes it more likely that the BoC will only need to hike 50bps as opposed to 75bps," says Harvey.

A paring back in rate hike expectations at the BoC would have a mechanical drag on the Canadian Dollar.

The currency was down two-thirds of a percent against the Pound and 0.40% down against the Euro. In fact it was the second-worst performing currency of the day, being the U.S. Dollar: 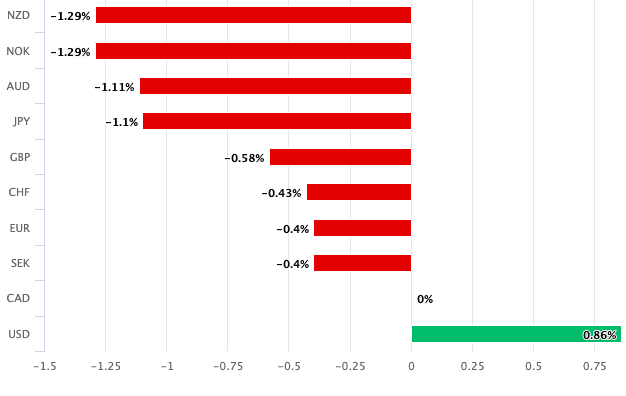 The Pound to Canadian Dollar exchange rate rose to a high of 1.5715 in the wake of the U.S. inflation data, taking bank account quotes for Canadian Dollar payments to 1.5210 and independent payment provider quotations to 1.56.

The Canadian Dollar's attachment to the U.S. Dollar's fortunes has been a key feature of 2022, and we can see when the year is considered in its entirety it is the second-best performer in the G10. 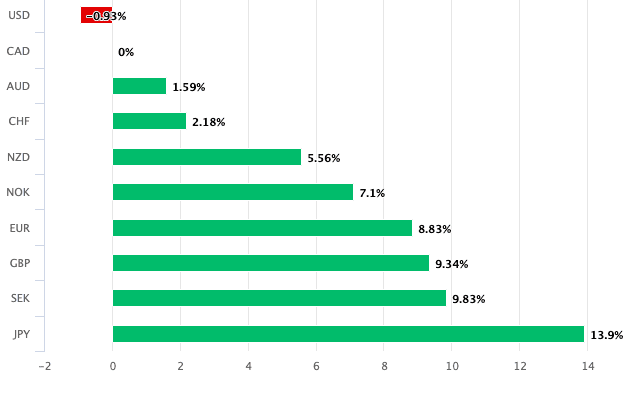