The Pound to Canadian Dollar exchange rate enjoyed a strong start to the new year but would be at risk of falling almost 100 points to around 1.7050 over the coming days if USD/CAD continues a nascent attempt to break lower, which could see it falling toward 1.2550 p or below this week.

Sterling hit the ground running in the opening week of January when advancing against all major currencies to take a tentative lead for the fledgling year of 2022, leading the Pound to Canadian Dollar exchange rate to rise briefly above 1.73.

But after a slow start last Monday and Tuesday the Canadian Dollar scored a hat-trick of gains over its U.S. counterpart in the latter half of last week, which pushed the all-important USD/CAD rate lower and in the process forced GBP/CAD into a concerted retreat.

That retreat could continue over the coming days after last Friday’s jobs figures appeared to confirm the Canadian labour market has returned to pre-pandemic levels of employment, which could potentially lead the Bank of Canada (BoC) to begin raising its cash rate as soon as this month.

“The data had little impact on the CAD but there is enough here to adopt a bias that the upcoming BOC meeting is live. As such, we think risk/reward has moved in favour of the CAD in the weeks ahead, and we are now long vs. GBP,” says Mazen Issa, a senior FX strategist at TD Securities. 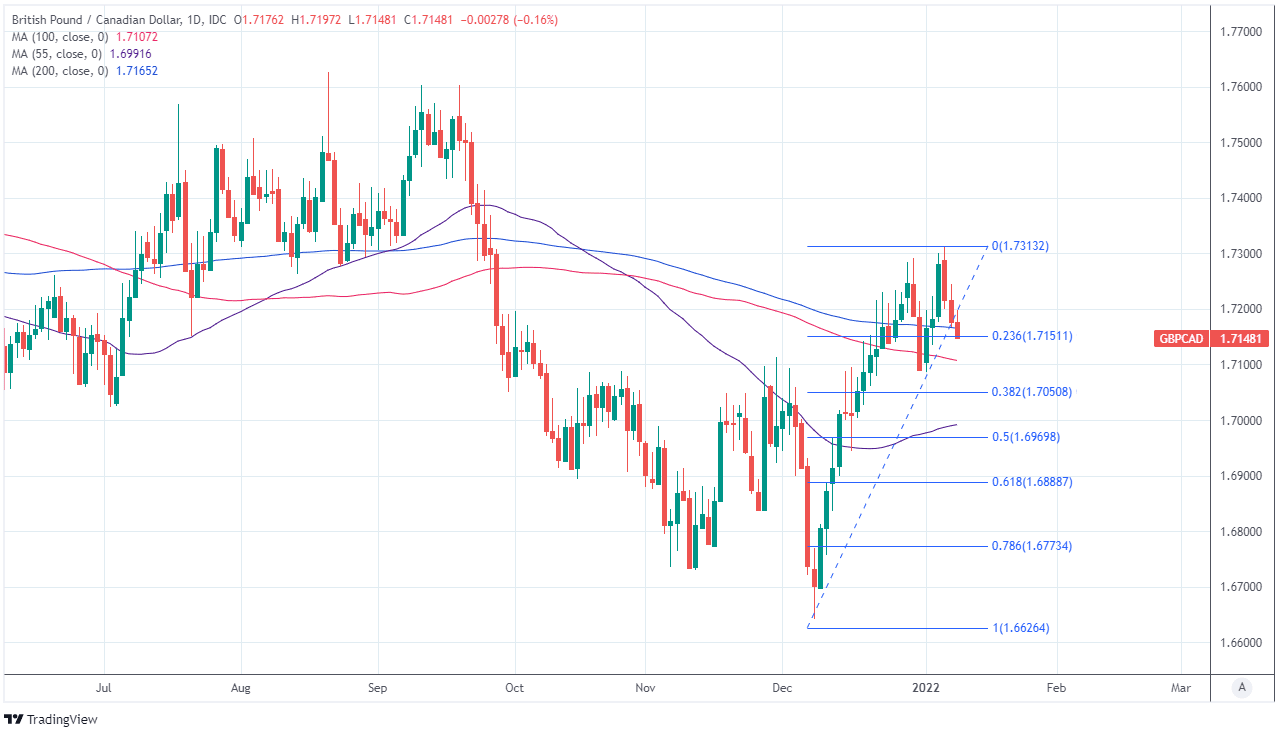 While the BoC’s January interest rate decision could still cut either way, strategists at TD Securities suspect the market will speculate over the coming weeks that an interest rate rise is likely, leading the Canadian Dollar to strengthen and placing GBP/CAD under further pressure along the way.

“Just the mere fact that the Canadian jobs printed to the upside again, emphasize that the labour market is rolling. This, alongside very elevated inflation, have us thinking that upcoming BOC event risks (BOS and the interest rate decision this month) will need to be closely watched,” Issa and colleagues said in a Friday note to clients.

“We also think it is prudent to assume the BOC adopts an 'earlier mover advantage' even though our official call is for an April lift-off. Consequently, we are now short GBPCAD as BOE pricing looks fair for tightening this year. We hold a bearish USDCAD bias but we think that the USD leg could be a bit resilient given a very hawkish Fed and deeply entrenched USD positioning,” the TD Securities team also said.

Overnight indexed swap markets had been pricing-in almost a zero percent probability of an interest rate rise being announced in the BoC’s next monetary policy decision on January 26 last Friday, leaving plenty of scope for an adjustment in market pricing to lift the Loonie.

“Our weekly models reflect some weakening in CAD correlations with stocks and crude oil prices which may allow for positive domestic fundamentals to shine through a little more in the short run if equity market sentiment remains fragile. The weekly range estimator suggests a little more topside risk for the market in the next few days while the base of the estimated range (1.2540) coincides with where we see fair value for spot currently (around 1.2544),” says Shaun Osborne, chief FX strategist at Scotiabank.

“But technical considerations should help the CAD; from a short-term point of view, today’s break under the 1.2705/10 zone suggests the USD should continue to fall towards the low/mid 1.26 range. More broadly, we think the late 2021 rejection of 1.29+ levels should see the USD push lower to retest the Oct low (1.2288) at least,” Osborne and colleagues wrote in a Friday briefing.

Canadian Dollar gains and an earlier bout of weakness in the U.S. Dollar had the all-important USD/CAD rate testing a double-barrelled layer of technical support on the charts by Monday, which comprises the pair’s 100-day moving-average at 1.2632 and the 50% Fibonacci retracement of its October rally.

A break beneath 1.2671 would remove the last technical impediment to a USD/CAD decline back toward 1.2550 and could put further pressure on the Pound to Canadian Dollar rate, which tends to closely reflect the relative performances of USD/CAD and GBP/USD. 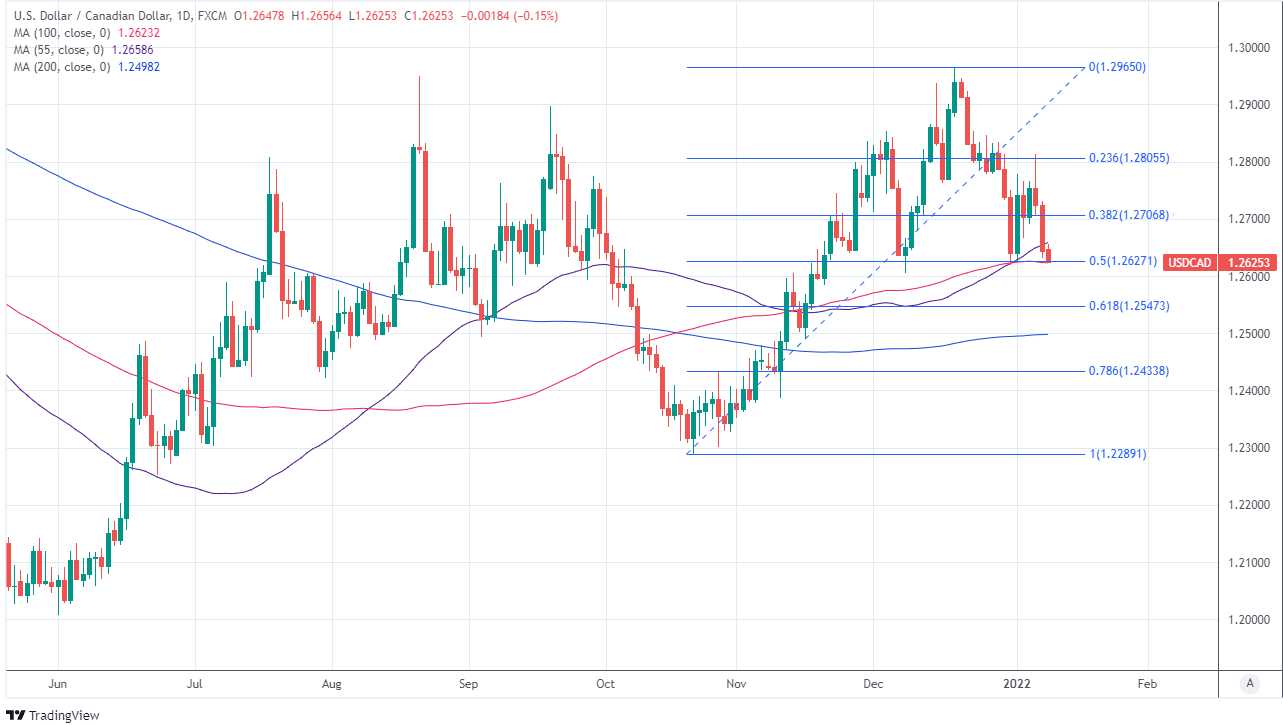 Above: USD/CAD at daily intervals with major moving-averages and Fibonacci retracements of October rally indicating likely areas of technical support.

Even with the main Sterling exchange rate GBP/USD buoyant around 1.36, the Pound to Canadian Dollar rate would risk falling close to 1.7050 this week if USD/CAD to keep its head above the 1.2671 waterline.

“Our economists expect the BoC to hike rates at the January 26 meeting, but have also highlighted that it’s a very close call between March/April and will likely depend on incoming data in the coming weeks—specifically the Business Outlook Survey (released on January 17) and the December CPI report (released on January 19)—as well as short-term considerations around the ongoing omicron outbreak,” says Michael Cahill, a G10 FX strategist at Goldman Sachs, who’s recently recommended that clients of the bank buy the Canadian Dollar against the Australian Dollar and Japanese Yen.

While the BoC reiterated in December that an increase in the cash rate is highly unlikely much before the second quarter and parts of Canada have since been returned to ‘lockdown’ due to the Omicron strain of coronavirus, the risk is that markets wager on BoC pulling forward to this month the point at which it deems an interest rate rise to be appropriate.

This would potentially enhance the pressure on the Pound to Canadian Dollar rate, which TD Securities tips for a decline to 1.68 over the next one-to-two months, although there’s also a chance of recent strength in the U.S. Dollar continuing over the coming weeks, which could frustrate the descent in USD/CAD and slow the decline in the Pound to Canadian Dollar rate at the same time.

The Canadian economic calendar is devoid of major appointments for the week ahead while the UK calendar has little to offer until Friday when November’s GDP data is released, although Tuesday’s U.S. inflation figures will be influential for USD/CAD, with knock-on effects upon GBP/CAD.

A further acceleration of U.S. price pressures for December could strengthen USD/CAD and arrest the decline in GBP/CAD, although both exchange rates would potentially be vulnerable to any surprises on the downside as they could lead the market to momentarily rethink recent bets that a March interest rate rise is a likely to be seen at the Federal Reserve this year.