The Pound to Canadian Dollar exchange rate has further encroached upon December’s highs in recent trading and could have scope to probe above the 1.71 handle over the coming days if the Loonie continues to cede ground to a recently resurgent U.S. Dollar.

Sterling rose close to two percent against the Canadian Dollar last week in what was its largest gain over any in the G10 contingent of major currencies, coming as the Loonie weakened sharply and the Pound held its own following last Thursday’s surprise interest rate rise from the Bank of England.

The GBP/CAD rate rose briefly to 1.7100 last week and could attempt to get above the level this week if the all-important USD/CAD rate continues to test its year-to-date highs just above 1.29.

“Our week ahead model suggests a 1.25-1.29 range and we remain more inclined to fade USD rallies. The charts reflect another significant, technical rejection of the 1.29 zone through mid-week and we expect this to represent firm resistance into New Year. Trend momentum remains USD-bullish but is weakening while we note the daily slow stochastic is diverging with spot (a bearish sign),” says Shaun Osborne, chief FX strategist at Scotiabank.

Pound-Canadian Dollar gains were helped when the BoE surprised the market by lifting Bank Rate from 0.1% to 0.25% last week, which was widely perceived as opening the door to further rate rises once into 2022, although the bulk of Sterling’s recovery was driven by weakness in the Loonie.

Oil-linked currencies were sold heavily last week and the Canadian Dollar was no exception, with USD/CAD having risen more than two percent back to 1.29 by Monday in price action that also had the effect of lifting GBP/CAD. 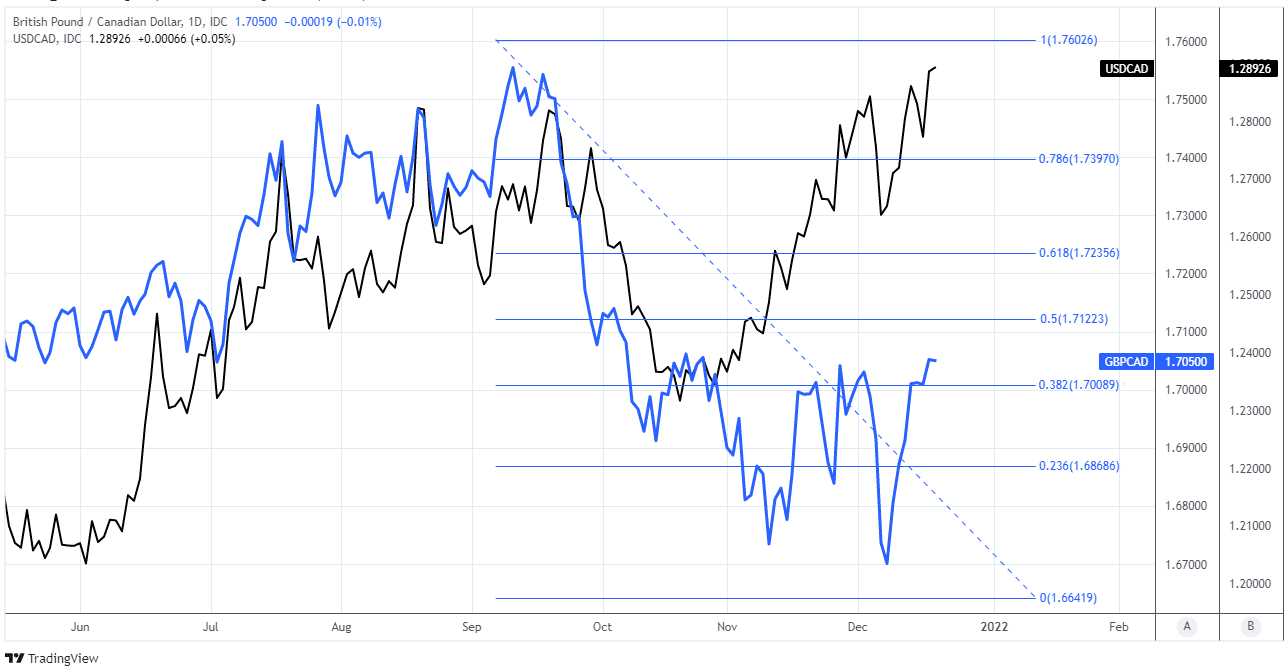 Above: GBP/CAD rate shown at daily intervals alongside USD/CAD.

The Pound-to-Canadian Dollar rate always closely reflects the relative performances of USD/CAD and GBP/USD, and would likely remain buoyant this week if for any reason USD/CAD continues to probe 2021 highs at 1.2950.

The week ahead will see Canada’s retail sales and GDP figures for October released on Tuesday and Thursday respectively, while the highlight for the UK is Wednesday’s release of the final estimate of third-quarter GDP data, which is widely expected to confirm the initially reported expansion of 1.3%.

“Assuming retail sales come in as we expect for October, that month’s GDP should represent a solid start to the quarter. What’s coming beyond that, however, won’t be as rosy, with activity hit first by the BC floods, and now by the arrival of the omicron variant and a likely pull back in services activity, at least for a couple of months,” says Avery Shenfeld, chief economist at CIBC Capital Markets.

“The real news, however, will show up in the flash estimate of November GDP. The strong jobs report missed the impacts of the flooding in BC that occurred towards the middle of the month, but Statistics Canada might do better in capturing its impact on GDP. As a result, look for November flash GDP to show a softer gain,” Shenfeld wrote in a Friday briefing.

For the Pound-to-Canadian Dollar rate however, it could be investors’ appetite for the U.S. Dollar that matters most this week given the limited implications of the UK and Canadian data due out as well as that both USD/CAD and GBP/CAD are sensitive to changes in the greenback’s direction.

That likely makes this Thursday’s PCE price index report from the U.S. the highlight of the week, with any signs of a further acceleration in U.S. inflation pressures potentially lifting the U.S. Dollar by encouraging the market to bring forward the time at which it expects the Fed to lift its interest rate.

This is after the Fed announced plans last week to accelerate the tapering of its quantitative easing programme so that it finishes in March 2022 rather than June, and warned that its interest rate could begin to rise as soon as the second quarter of next year.

“The report is expected to confirm that inflation pressures remained elevated in November. The Fed has finally acknowledged that inflation pressures are more persistent than expected at their latest policy update,” says Lee Hardman, a currency analyst at MUFG. "“In recent months the USD has tended to strengthen modestly initially following the release of PCE Deflator reports. The USD has strengthened initially following four of the last five reports". 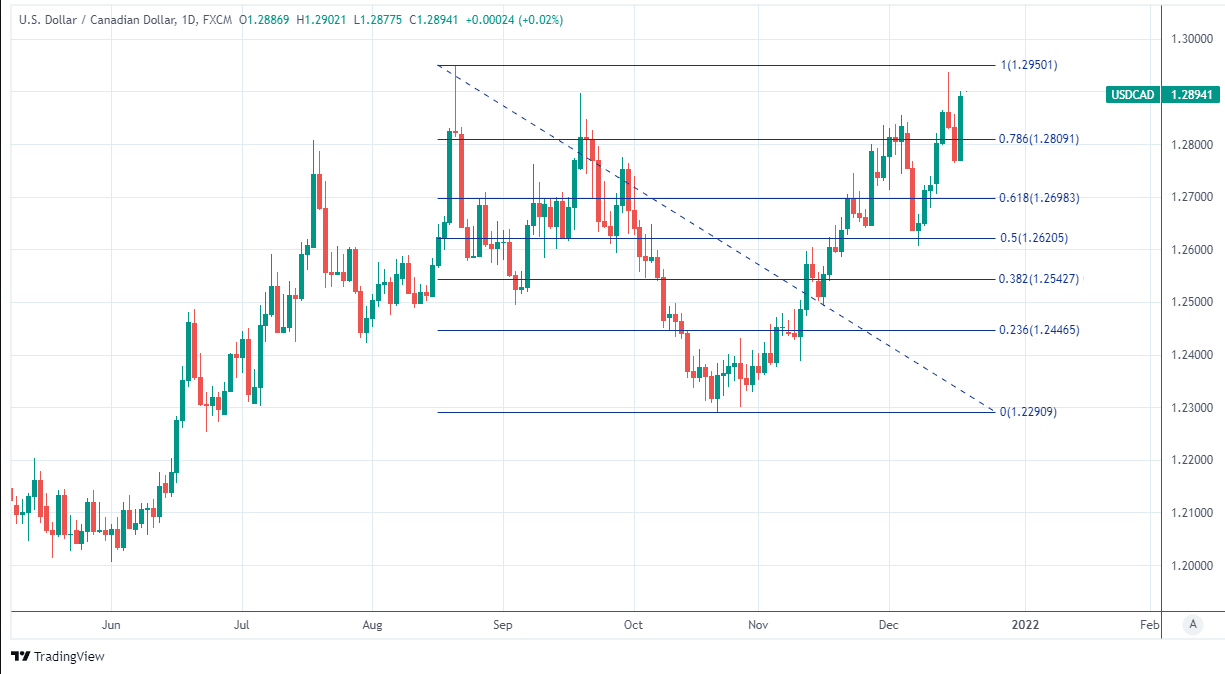 Above: USD shown at daily intervals with Fibonacci retracements of August fall indicating likely areas of technical resistance for USD.