The Canadian Dollar is likely to reach its strongest level against the U.S. Dollar since 2014 next year, according to Morgan Stanley forecasts that would see GBP/CAD falling to its lowest since the years immediately after the financial crisis of 2008 and the Loonie strengthening against a raft of other currencies.

Canada’s Dollar remained the top performer among major currencies on Thursday and by a comfortable margin too in the case of all but the Chinese Renminbi after the Loonie eked out almost a one percent gain over a U.S. Dollar that was otherwise a widespread winner for the year.

The Canadian Dollar and Renminbi were the last major currencies still standing on Thursday following an onslaught by a U.S. Dollar that demolished all others in its path during the five months to mid-November, and Morgan Stanley’s forecasts suggest the Loonie’s outperformance can continue.

“CAD is the outperformer in the dollar bloc, benefiting from positive global and local stories – strong US data providing local tailwinds, a hawkish BoC, robust commodity and risk prices, and less troublesome positioning,” the bank’s strategists said in a presentation of their views on the outlook for 2022.

Canada’s Dollar is seen edging lower from Thursday’s 1.26 against the greenback to 1.23 before year-end but expected to be kept afloat above the latter level throughout the first quarter of 2022 as the Bank of Canada (BoC) delivers on its latest guidance about the cash rate. 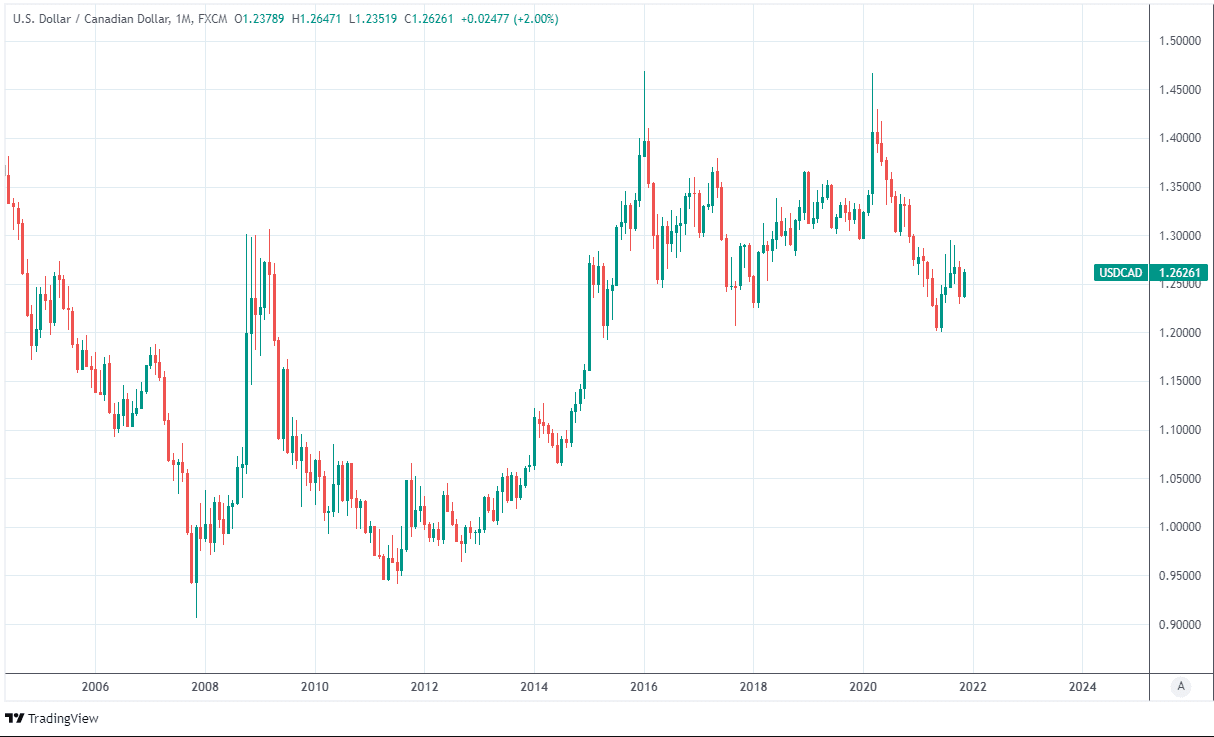 Above: USD/CAD shown at monthly intervals.

The BoC said in late October that the economic conditions that are necessary for it to begin reversing 2020’s pandemic-inspired interest rate cuts are unlikely to materialise until the second quarter 2022 at the earliest, meaning there’s a chance investors are disappointed by the BoC early in 2022.

“We think that USD/CAD may struggle to fall at first as the BoC eschews lift-off in January 2022, but a rapid pace of hikes later that year brings the pair down to 1.12 by end-2022,” the Morgan Stanley team says.

Rates in the overnight-indexed-swap market indicated on Thursday that investors expect Canada’s benchmark cash rate to be lifted to 0.50% following the BoC’s March 2022 meeting, and also implied a very high probability that this move would be followed by an increase to 0.75% in April 2022.

This is a recipe for disappointment that could eventually see the Canadian Dollar blighted by the very same kind of selling that hit the Pound in early November when the Bank of England (BoE) left a mistaken market standing at a proverbial altar on its own.

“We expect USD to continue its strengthening trend over the coming months, with the DXY rising to 97 by mid-2022, but then expect a pivot lower to 92 by end 2022,” Morgan Stanley says in reference to its U.S. Dollar outlook.

Also underpinning USD/CAD in the early part of 2022 is likely to be the market’s possibly mistaken view that the Federal Reserve will begin lifting its interest rate around the middle of the year before raising borrowing costs at a rapid clip over subsequent quarters.

Morgan Stanley doubts the Fed will be as quick to raise rates as the market expects and the central bank has itself said that policymakers in the U.S. feel they can afford to be patient before reversing the extraordinary support provided to the economy since the onset of the pandemic.

This too is a recipe for a market disappointment that could eventually weigh on USD/CAD to the Canadian Dollar’s benefit, although the Loonie’s envisaged gains for 2022 encompass far more than just the U.S. Dollar and in part because of Morgan Stanley’s expectations for other currencies. 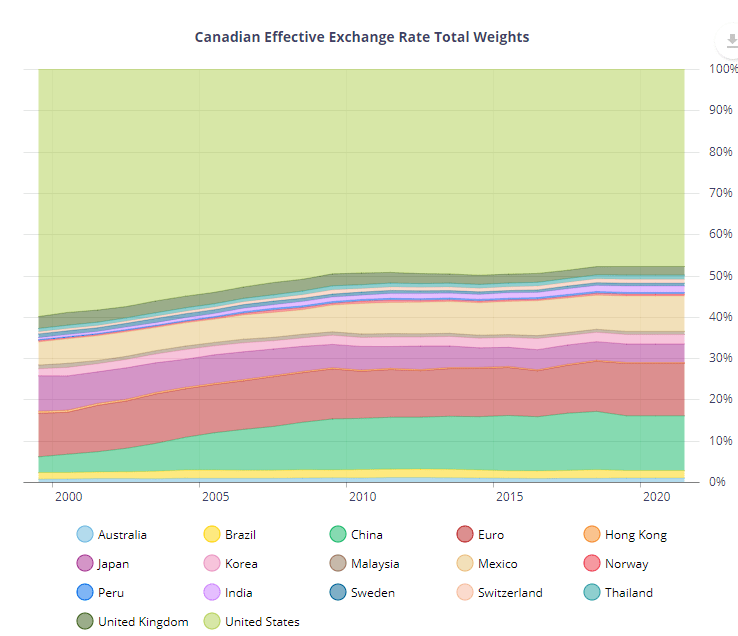 Above: Components and counterpart currency weightings from the Bank of Canada’s real effective exchange rate

All in the G10 grouping of currencies are expected to remain largely within their 2021 ranges against the U.S. Dollar over the course of next year as the USD/CAD rate unravels toward 1.12 and its lowest level since before the oil price collapse that ended in early 2016.

This would see the Canadian Dollar strengthen materially against all of the above currencies including the Pound; the Pound to Canadian Dollar exchange rate is forecast to fall from 1.70 against the Loonie on Thursday to 1.55 by the end of 2022.

That would be close to Sterling's lowest level against its Canadian counterpart since the years immediately after the global financial crisis of 2008.

In addition, the Renminbi is also seen remaining within 2021’s range against the U.S. Dollar, which means the Loonie would strengthen against its Chinese counterpart too.

The Peso is expected to push the USD/MXN rate down from an anticipated 20.70 in January 2022 to 20.00 by year-end, which suggests Canadian Dollar strength against its Mexican counterpart too.

All of the above currencies are key parts of the Canadian effective exchange rate - or the overall Canadian Dollar exchange rate - as constructed by the Bank of Canada and so the Loonie’s anticipated 2022 performance would also be likely to lift the trade-weighted Loonie to its highest since 2014. 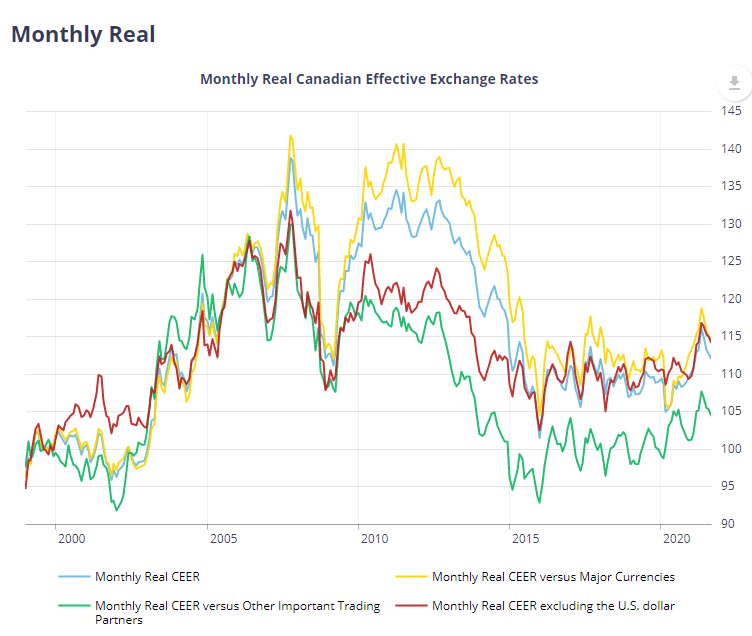