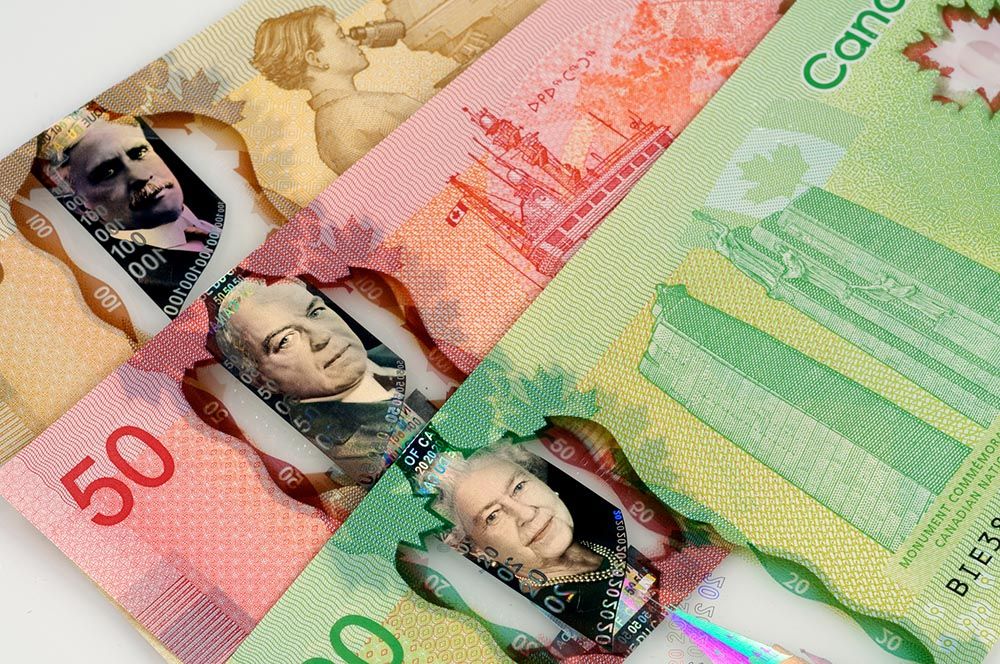 The Pound to Canadian Dollar exchange rate entered the new week nursing wounds close to new 2021 lows, above which it could attempt to find a foothold over the coming days and in what will be a quiet period for both Canadian and UK economic calendars.

Sterling fell to a little over 1.6730 against the Canadian Dollar last Friday and to its lowest since late in March 2020 after the Pound was sold heavily in the market’s response to Thursday’s decision by the Bank of England (BoE) leave Bank Rate unchanged in November.

That left investors to weigh whether the BoE might be most likely to begin reversing 2020’s cuts to interest rates in December or the early months of the new year, but also downsized market expectations for UK interest rates next year, which are since seen rising toward 0.97% by the end of 2022.

It could be a potentially helpful development for Sterling however, because it leaves last Friday’s market expectations for Bank of Canada (BoC) interest rates clearly appearing as the more unrealistic out of the two GBP/CAD constituents.

Prices in the overnight-index-swap market were implying last Friday that there’s a near certainty of the BoC lifting Canada’s cash rate three times before September next year, despite the bank itself suggesting in October that July would be the earliest it’s likely to make any move at all.

“Meanwhile, other major central banks are pushing back against the idea of earlier rate increases. The door to further CAD (and USD) gains against the likes of the EUR, JPY and GBP is widening,” warns Shaun Osborne, chief FX strategist at Scotiabank. 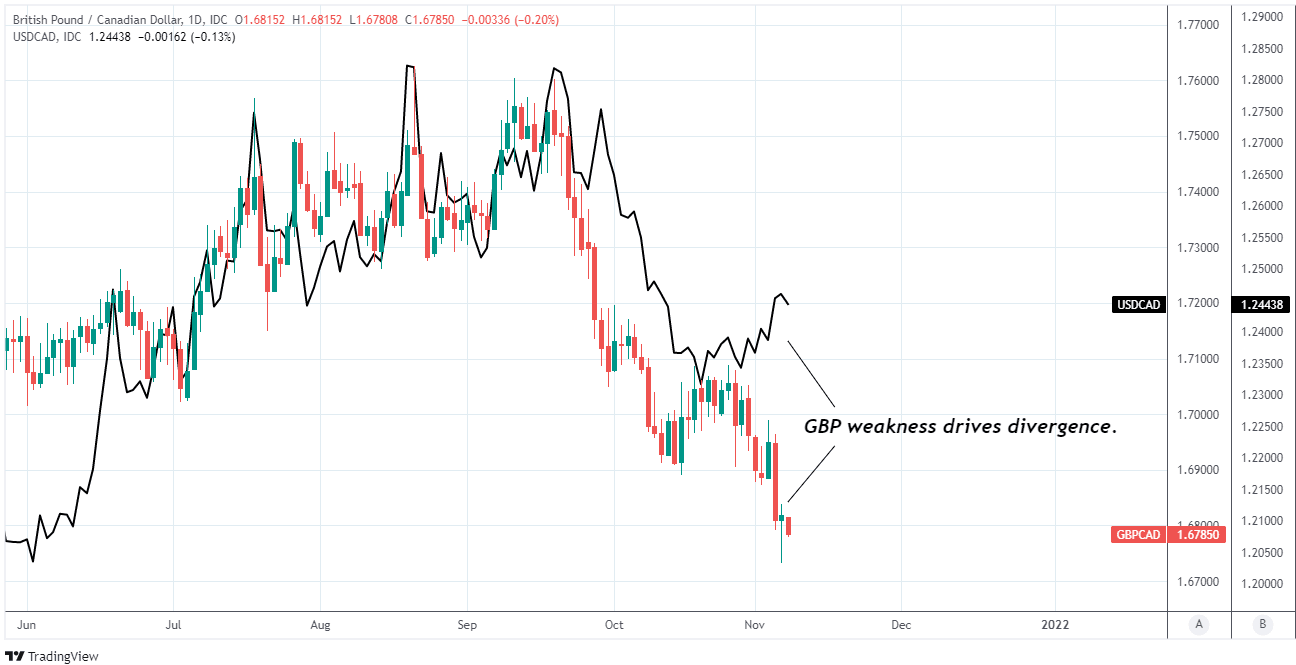 The week is a quiet one for UK and Canadian calendars until Thursday when September and third-quarter GDP data are out in the UK at 07:00.

“We estimate that GDP rose by a paltry 0.1% m/m in September, which would be consistent with a 1.4% q/q rise in GDP in Q3 as a whole. Supply shortages will probably result in a smaller rise in GDP in Q4,” says Paul Dales, chief UK economist at Capital Economics.

“We think that a 1.4% q/q rise in Q3 GDP was due to consumer spending and business investment more than offsetting a drag from net trade,” Dales said on Friday.

The relatively quiet calendars could leave GBP/CAD especially susceptible to market appetite for U.S. Dollars and the resulting impacts on USD/CAD and GBP/USD, which are key influences on the Pound-to-Canadian Dollar rate.

GBP/CAD always closely reflects the relative performance of the latter two exchange rates and would likely remain suppressed beneath the 1.6800 level over the coming days if Scotiabank is right about USD/CAD holding beneath the rough 1.2525 area this week as the U.S. Dollar strengthens.

“We favour fading USDCAD rallies but picking entry points may get trickier in the next few weeks as seasonal trends tend to favour the USD through November; the high 1.24s/low 1.25s remains an attractive zone for initiating USD shorts but we cannot exclude the risk of USD gains extending towards the low 1.26s,” Osborne wrote in a note last Friday.

The Pound to Canadian Dollar rate would struggle to recover at all in those circumstances unless the main Sterling exchange rate GBP/USD is also able to avoid ceding further ground to the greenback this week.

Some analysts have suggested that it could, although appetite for the Dollar may also be sensitive to this Wednesday’s U.S. inflation figures for October.

“We remain confident that, despite this week’s plunge below 1.35 on the back of the steady BoE’s meeting outcome, GBP-USD may still rebound from current lows,” says Roberto Mialich, an FX strategist at UniCredit Bank in a Friday research note.

“Positioning still favors bullish strategies on the GBP and commodity currencies and bearish strategies on the JPY, while signals are mixed for the CHF. Investors are likely to be focused on inflation data in China and in the US, as well as UK GDP figures for 3Q21,” Mialich wrote in a Friday research note. 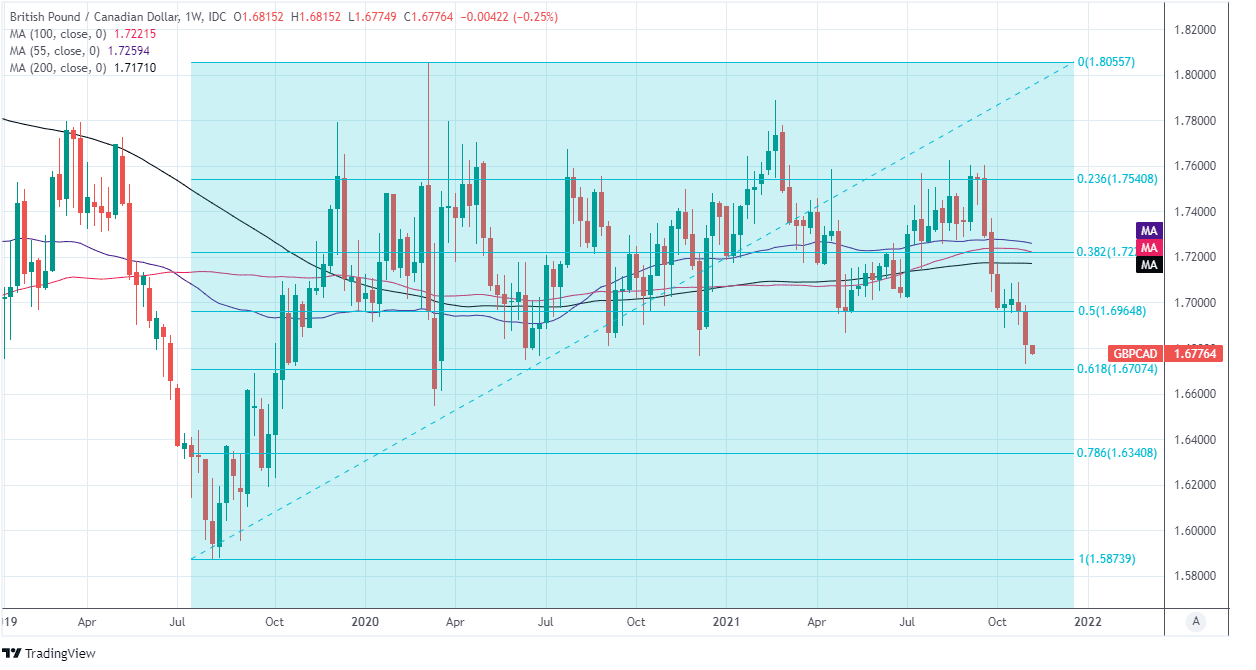