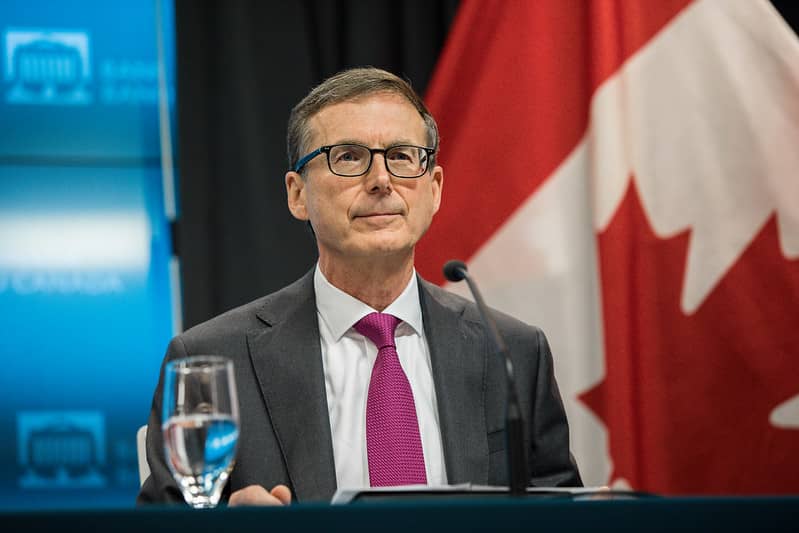 The Pound-to-Canadian Dollar exchange rate was toppled into a retest of multi-month lows near the round number of 1.69 when the Loonie rallied strongly against all counterparts after the Bank of Canada (BoC) announced its October monetary policy decision.

Governing Council members voted in October’s meeting to immediately end the issuance of new central bank reserves that had funded the BoC’s quantitative easing (QE) programme ever since it was announced in March 2020.

They also appeared to indicate that an initial increase in the still-unchanged cash rate of 0.25% could come slightly sooner than previously guided for.

“Overall, much more hawkish than we expected (although not more hawkish that what the market has priced in), and in our view, overly pessimistic about the how much supply shocks will constraint potential GDP ahead, and a bit optimistic in its growth forecasts, both of which could delay the timing of the first hike versus what is signalled here,” says Avery Shenfeld, chief economist at CIBC Capital Markets.

In relation to interest rates the BoC said it expects Canada’s economy to be in a position to sustainably deliver the 2% medium-term inflation target “sometime in the middle quarters of 2022,” when previously it had said “In the Bank’s July projection, this happens in the second half of 2022.”

The BoC is committed to holding its cash rate at 0.25% until “economic slack is absorbed so that the 2 percent inflation target is sustainably achieved.” 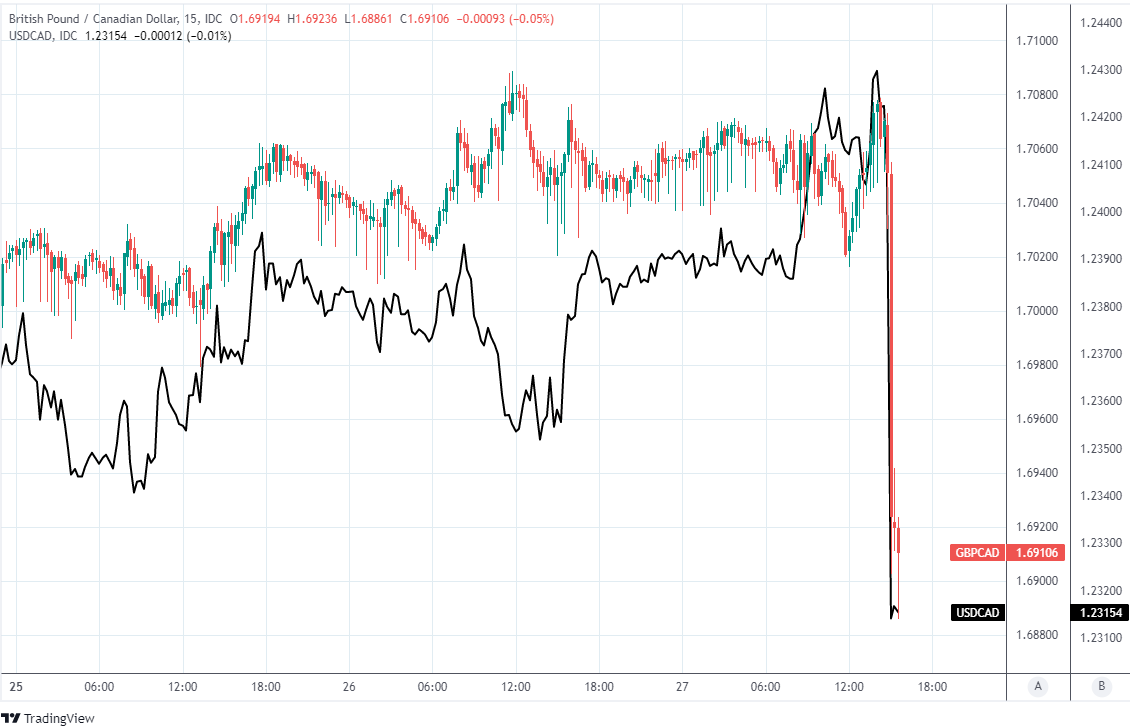 In relation to quantitative easing, the BoC will now only buy Canadian government bonds as and when those already held on its balance sheet mature, marking a shift to what the bank calls “the reinvestment phase” of its QE programme as well as surprise for the financial markets.

“The decision is likely to provide some support to the CAD in the short-term at least. While the rates market had already been pricing in a hawkish shift in rates guidance, we have seen currencies making gains when central banks simply met this pricing, even if they did not exceed it,” says Dominic Bunning, European head of FX research at HSBC.

“Beyond the near-term reaction, a further question for the CAD will be the degree to which the market also looks for a more prolonged hiking cycle,” Bunning also said in a note following the decision.

The Bank now forecasts Canada’s economy will grow by 5 percent this year before moderating to 4¼ percent in 2022 and 3¾ percent in 2023, reflecting what are mostly downgrades from July forecasts of 6%, 4.5% and 3.25% respectively.

Many analysts and economists had expected the BoC to reduce its issuance of new reserves and the accompanying purchases of new government bonds from C$2BN per week to C$1BN per week on Wednesday, with only a handful having dared to imagine that it would end the programme entirely.

“The Bank is closely watching inflation expectations and labour costs to ensure that the temporary forces pushing up prices do not become embedded in ongoing inflation,” the BoC said in summary of October’s monetary policy decisions.

The decision follows sharp gains in Canadian inflation rates that have echoed the increases seen elsewhere in the world and which many central bankers including those at the BoC have so far viewed as temporary or “transitory.”

Confidence in that judgement has been tested by the persistence of price increases however, and in recent months other central banks had already begun to acknowledge that with popular attention having turned to the subject of price growth, there’s an emerging risk that expectations begin to rise.

“Inflationary pressures continue to build, and we are well beyond the point where they can be casually dismissed as transitory or reflecting base effects. Meanwhile, the growth picture is also murky, as the Bank is grappling with downward growth revisions and solid job gains,” says Mark McCormick, global head of FX strategy at TD Securities, who’s a recent buyer of USD/CAD and is looking for a move up to 1.2750 into year-end.

Rising expectations of future inflation can become self-fulfilling and self-perpetuating prophecies if they impact the price setting intentions and wage demands of workers, and this is problematic for central banks when the expected levels point toward inflation that is above their target rates. 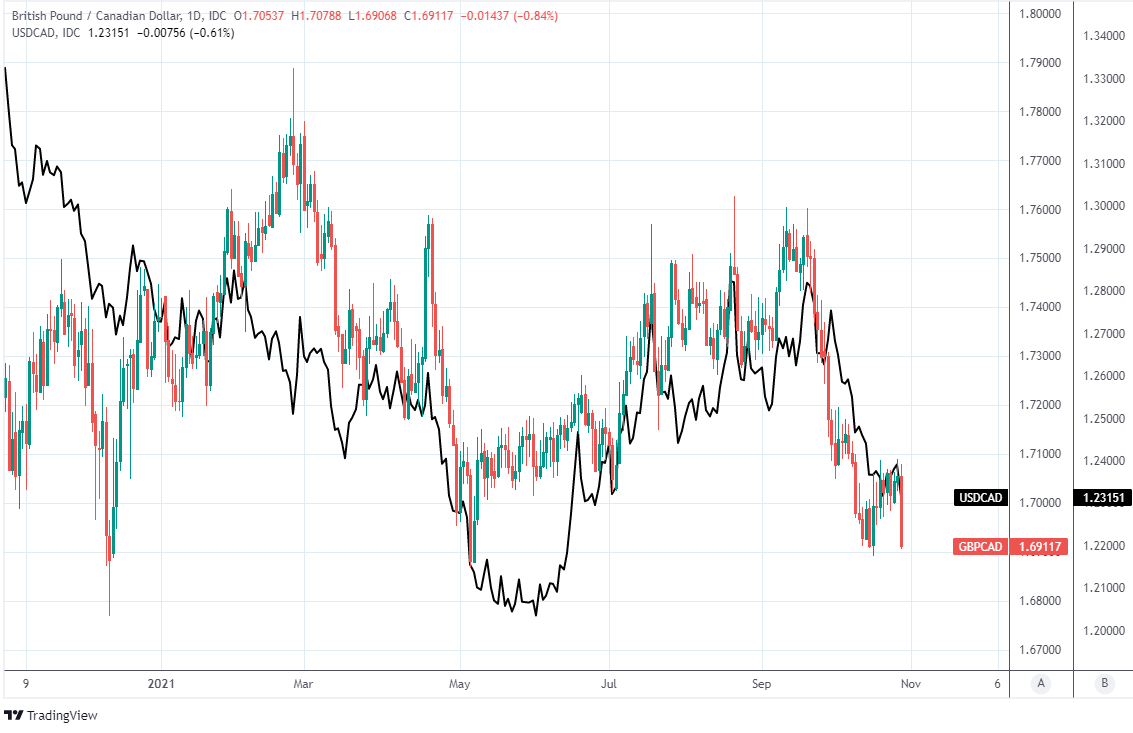 Central banks use interest rates and other monetary policy tools to manage inflation while the BoC itself has a target to ensure it remains around 2% over the medium-term, with higher interest rates being the typical prescription for curbing excessive levels of price growth.

“The peak BoC hawkish trade was earlier this year when they were one of the few games in town dialing up the rhetoric on a 2022 hike. That was also the peak in BoC/Fed divergence, which ended in USDCAD hitting a 1.20 low. But, as we noted many times, the bulk of that move was unjustified, and it quickly reversed. The market got over its skis,” TD’s McCormick wrote in a research note on Wednesday.

Canadian exchange rates rallied in the wake of Wednesday’s announcement, pushing USD/CAD back below 1.24 and taking it almost as far as 1.2300 in price action that pulled the Pound-to-Canadian Dollar exchange rate 150 points lower from a little over 1.7050 to near the round number of 1.69.

Whether or not USD/CAD is able to make it below 1.23 over the coming days would be a key determinant of if GBP/CAD moves beneath 1.69, which could then trigger further losses, as the latter always closely reflects relative price moves in USD/CAD and GBP/USD.

Should USD/CAD fall as far as its next major technical support level around 1.22 in the days or weeks ahead, the Pound-to-Canadian Dollar exchange rate would set a new 2021 low near to the round number of 1.67 unless in the meantime GBP/USD is able to also rally from Wednesday’s 1.3720 level.

“Intraday support is 1.2370; a break below that point this morning negates the bull pressure on spot and turns the immediate outlook USD-negative,” warned Shaun Osborne, chief FX strategist at Scotiabank, in a note ahead of the BoC’s decision. 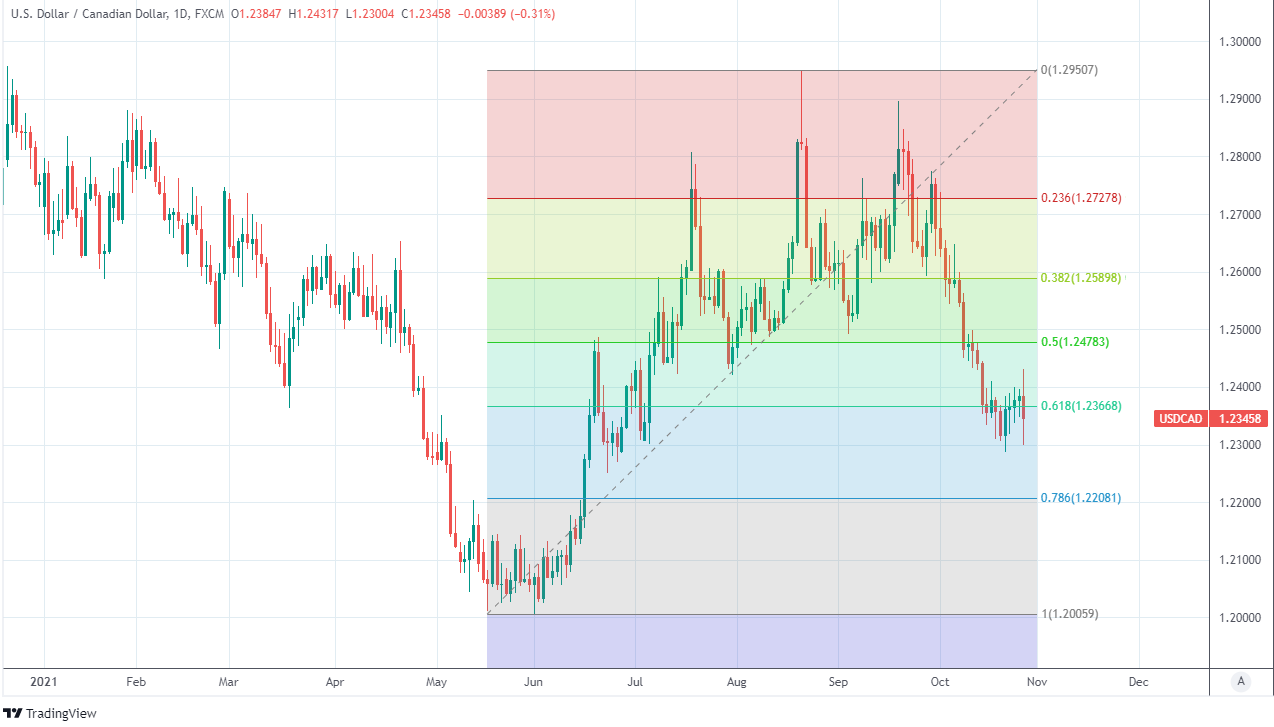 Above: USD/CAD shown at daily intervals with Fibonacci retracements of June's rally indicating possible areas of technical support for USD.