The Pound-to-Canadian Dollar exchange rate rose further from 2021 lows ahead of the weekend after Bank of Canada Governor Tiff Macklem effectively gave the Loonie a speeding ticket for its pole position among major currencies this year.

Canada’s Dollar remained the best performing major currency of 2021 on Friday even after Macklem warned that any further meaningful gains by the Loonie would risk voiding the ‘hawkish’ interest rate outlook that had cemented the Loonie’s position at the top of the 2021 league table since last month’s monetary policy decision.

"If it moves much further, that could become more of a headwind on our export projections," Macklem said when asked in a media availability session about recent developments in Canadian exchange rates.

"That could have a material impact on our outlook and it’s something we’d have to take into account in our setting of monetary policy," he added.

Governor Macklem was prompted on various topics though none more important for the Canadian Dollar than the market’s interpretation of the Bank of Canada's (BoC) latest forecasts, which resulted in the bank’s April assessment that Canada’s economy could be in a position by mid-2022 to sustainably deliver the inflation target. 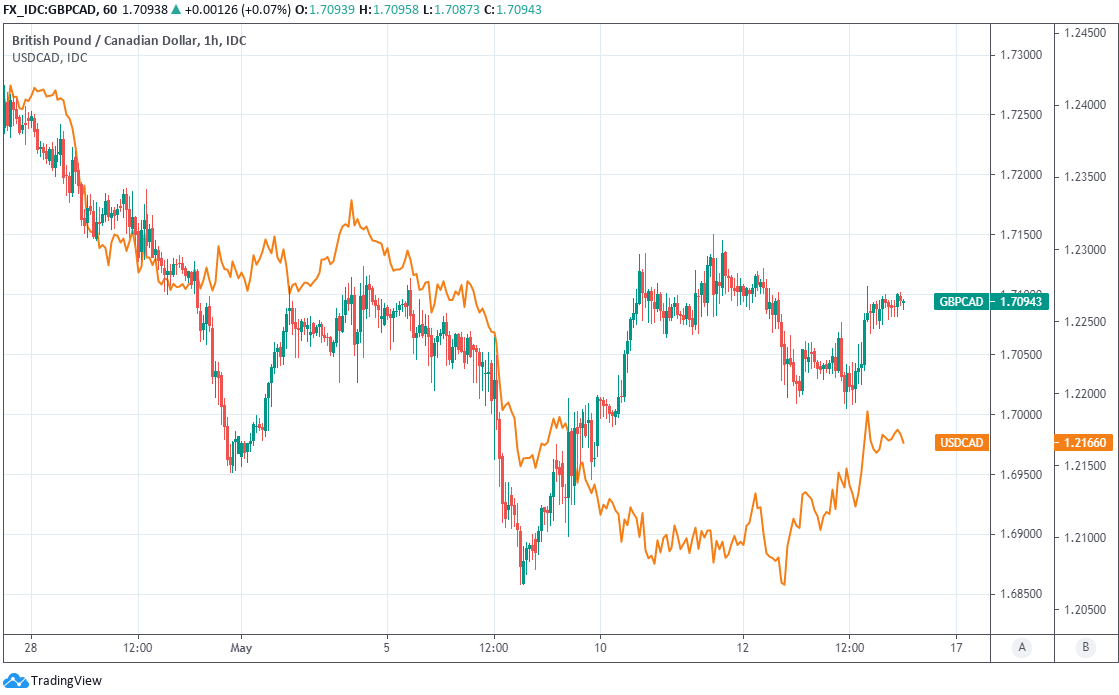 Above: GBP/CAD shown at hourly intervals alongside USD/CAD.

The latter was interpreted by the market to mean that interest rate rises could be announced as soon as next summer, and ahead of the Federal Reserve (Fed) by implication of market pricing, although Governor Macklem reiterated the BoC’s scepticism on Wednesday that the job market could be sufficiently repaired by then.

Canadian unemployment rose from 7.5% to 8.1% in April due to the effect of another ‘lockdown’ in the country’s largest province Ontario, although the Canadian Dollar has risen against all major currencies in the month to Friday and with much of its gains coming after the BoC’s April meeting.

“The governor suggested that it has been driven by recent strength in commodity prices, which is a positive for the Canadian economy. But, if it appreciated much further, it would create a material headwind for non-commodity exports and business investment which he would have to consider,” says Royce Mendes, an economist at CIBC Capital Markets.

USD/CAD rose further from six-year lows around 1.2050 to test the 1.22 handle on Friday, leading the Pound-to-Canadian Dollar rate to retest 1.71 on the upside after Sterling itself lifted the exchange rate from its 2021 earlier this week. 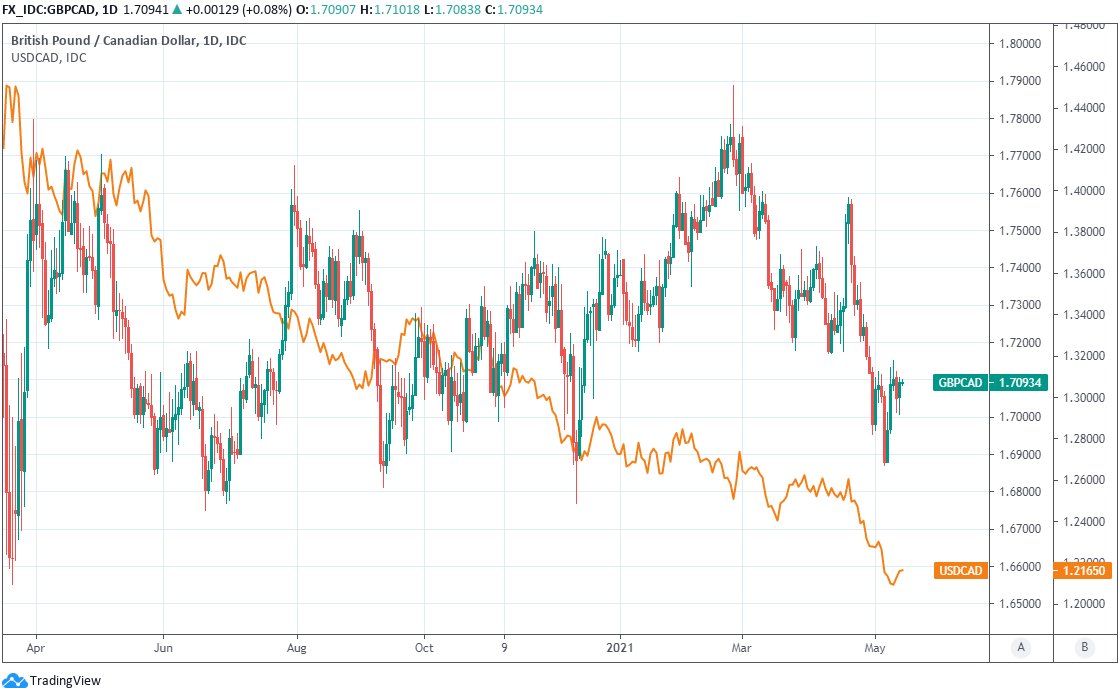 Above: GBP/CAD shown at daily intervals alongside USD/CAD.

GBP/CAD fell to its lowest since December 2019 earlier this month as Canada’s Dollar consolidated its grip on the top spot in the major currency league table for 2021.

The Loonie had enjoyed a supportive wind in its sails resulting from a Canadian economy that has so-far been more resilient to coronavirus containment measures than in previous periods where restrictions were tightened, as well as rising oil prices, Canada’s proximity to a strong U.S. economic recovery and then the BoC’s policy .

BoC policymakers cited that more resilient economy for an April decision to reduce the amount of Canadian government bonds acquired under the bank’s quantitative easing programme each week for a second time, taking the amount from C$4BN to C$3BN.

These factors all played a prominent role in unravelling the Pound-to-Canadian Dollar rate in recent weeks although with Governor Macklem now ticketing the Loonie for its advance, Sterling could yet recover further lost ground over the coming days.

"The USD based just under 1.2050 yesterday and the USD advance formed a bullish key reversal session. Given the extended run lower in spot in the past few weeks, the USD rebound and the price signals generated warrant attention," says Shaun Osborne, chief FX strategist at Scotiabank, referring to USD/CAD.