The Pound-to-Canadian Dollar exchange rate was little changed following volatile trading last week but could be seen reclaiming its range highs over the coming days as the greenback rolls over, risking underperformance by the Loonie, while Sterling shines with European currencies.

Pound Sterling ended last week with a small gain over the Loonie despite steep losses in the latter half when the Bank of Canada (BoC) reduced for a second time the pace at which it buys government bonds and hinted that an interest rate rise may be seen as soon as the middle of 2022.

Stronger-than-expected economic data through the first-quarter has enabled the BoC to reduce its weekly purchases of Canadian government bonds from C$4BN to C$3BN and has prompted hope at the Bank that its 2% inflation target could be sustainably met by the middle of next year.

That means the BoC will then be in a position to consider lifting the cash rate from its current 0.25%, vindicating ‘hawkish’ wagers by some analysts and investors who’d bet recently that the bank could eventually be seen lifting its interest rate sooner than the Federal Reserve.

This was why the Canadian Dollar rallied hard in the second half of the week, weighing on GBP/CAD, although the Loonie has not pushed USD/CAD to new lows and may now face a period of comparative underperformance in an important week for North American economic data.

“Economic resilience appears to be waning as we look for retail sales to underperform flash estimates with a 3.5% advance, after similar disappointment on manufacturing and wholesale sales,” says Andrew Kelvin, chief Canada strategist at TD Securities. 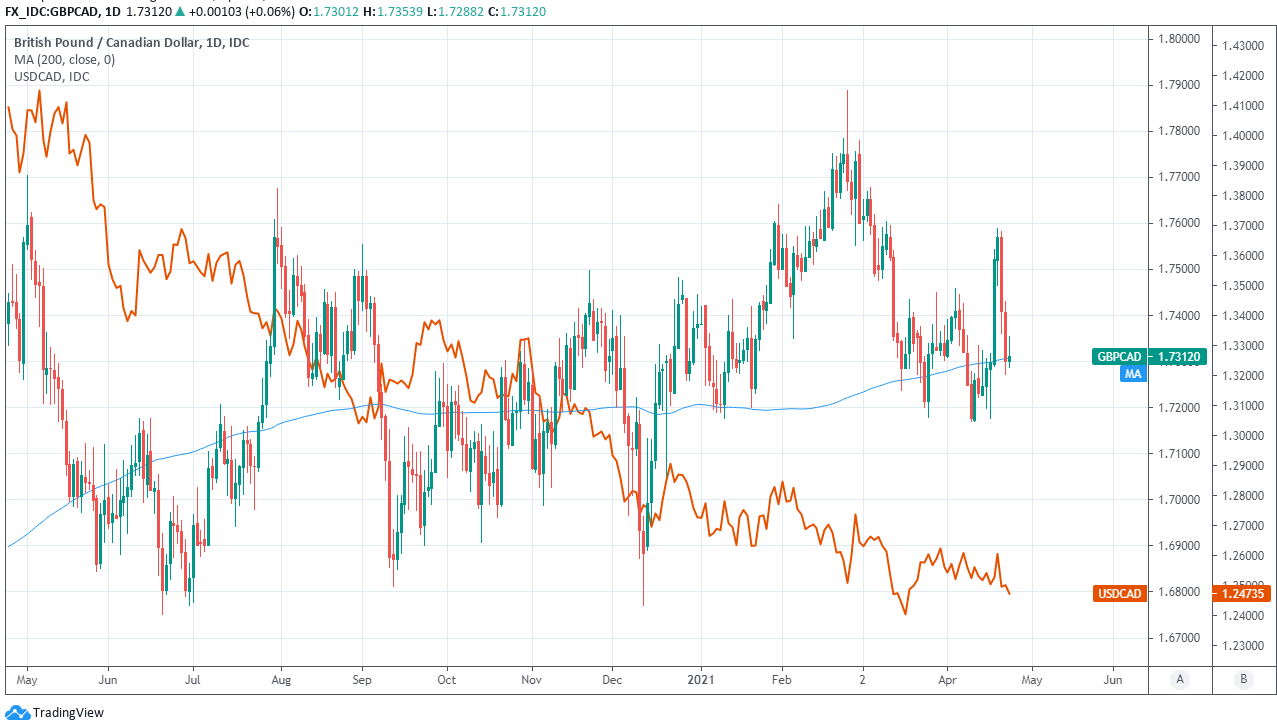 Above: GBP/CAD at daily intervals sitting atop 200-day average, alongside USD/CAD (orange).

Kelvin and the TD Securities team have warned however of possible indications that Canada’s economic resilience may at least appear to be waning this week with an anticipated disappointment for March retail sales on Wednesday.

Consensus looks for Canadian retail sales to have risen 3.5% in March when the data is released at 13:30 GMT on Wednesday, though this is a period in which large parts of Canada were returned to ‘lockdown’ while TD Securities has observed indications of softening sales momentum coming from other figures.

Friday at 13:30 GMT sees February GDP data released from Canada where the market is looking for a 0.3% increase that month, although with North American economies and currencies outperforming in recent months, they could be especially susceptible to a disappointment this week.

“The Canadian Dollar was the best performing major currency in the first quarter when broad-based Dollar strength pushed most other currencies lower. The CAD appreciation trend has stalled in recent weeks, but we think that is only temporary. We recently nudged our near-term USD/CAD forecast down to 1.23,” says Michael Cahill, a G10 FX strategist at Goldman Sachs.

Cahill and the Goldman Sachs team are forecasting further Canadian Dollar gains over the next three months and cite the very same factors that led the BoC to upgrade its outlook last week, including robust recoveries by the Canadian and global economies.

Brighter global prospects are likely to be buttressed on Wednesday by strong U.S. GDP data, not least because of the trillions spent by Washington this year in support of households and firms, though this won’t necessarily help the countercyclical U.S. Dollar.

Neither would the nth iteration of the Federal Reserve’s (Fed) policy outlook at 19:00 on Wednesday as this, given the bank’s pledge to leave interest rates near zero even as the recovering economy lifts inflation back to and then above its 2% target, would incentivise Dollar sales.

The U.S. Dollar has rolled over this April and it may not be a coincidence that concurrent with this the Canadian Dollar has also come off the boil because it’s often observed underperforming or outperforming whenever the greenback turns lower or higher.

Sterling also fared poorly last week despite robust UK economic data, which leaves it line for a Monday catch up with European counterparts that could be the foremost beneficiaries in the coming months of a depreciating trade-weighted Renminbi that weighs heavily on U.S. exchange rates.

Just like the U.S. Dollar the trade-weighted Renminbi is also a countercyclical currency and one which is influential on the global market.

It’s this and the closely-correlated Euro’s resurgence that explain why GBP/CAD is likely to see a strong start to the week that takes it back toward range highs around 1.75 as GBP/USD recovers the 1.40 handle while USD/CAD oscillates around 1.25.

“Sterling still scores as undervalued against the dollar, suggesting GBP/USD should be able to break above 1.4000 (after failing to do so this week) in the coming days without excessive resistance, especially if our bearish view ahead of the FOMC meeting on Wednesday proves correct,” says Francesco Pesole, a strategist at ING. 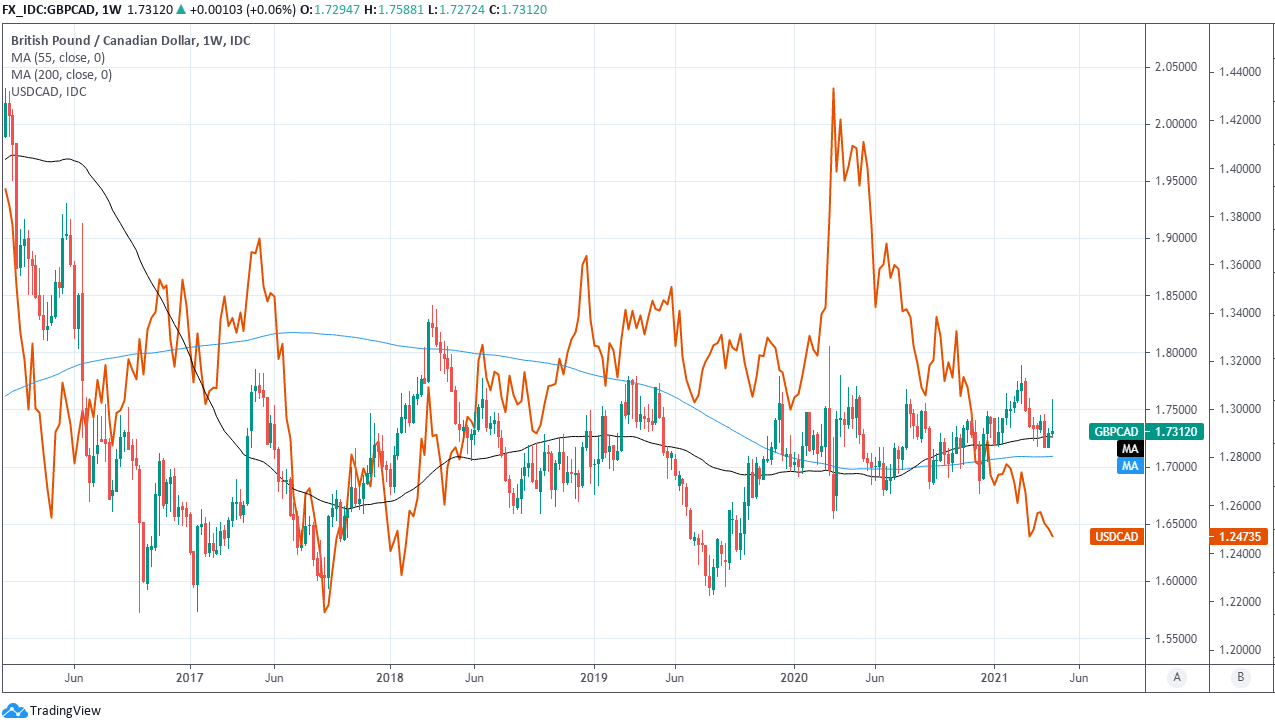