The Pound-to-Canadian Dollar exchange rate was lower on Wednesday alongside other Sterling pairs but could benefit this quarter from a wave analyst upgrades to their outlooks for the British currency, some of which place GBP/CAD on course for the 1.80 level and what would then be one-year highs.

Sterling has led major currencies higher against the U.S. Dollar this week having risen against even popular commodity and reflation trades like the Loonie, which has itself now been a relative outperformer alongside its Australian cousin.

While there was no clear trend in risk harbours like stock and commodity markets, most have advanced in the last week while giving the impression that investors are in an upbeat mood about the outlook for the global economy, as well as currencies that are sensitive to its ever changing prospects.

"UK virus infections appear to be slowing, vaccines are progressing rapidly and there are signs that the post-Brexit kinks in cross border trade are getting smoothed out, adding to the positive GBP undertone," says Shaun Osborne, chief FX strategist at Scotiabank. "GBPUSD is embarking on a sixth, consecutive weekly gain as it nears the psychological resistance point of 1.40. In effect, the round number is the only technical hurdle ahead of the GBP rally extending to the 1.43+ area."

It was widely documented how Britain's economy was one of the worst impacted by the coronavirus in 2020 so December's approval of the vaccine made by Pfizer and BioNTech, which was the first in the world and one that came more than a month ahead of an equivalent move by the European Union, was perhaps always likely to bolster the outlook for the UK's economic economy.

However, and what nobody anticipated is the setbacks that would later befall Europe's vaccination effort, which have been seen as potentially delaying the bloc's recovery relative to the UK. 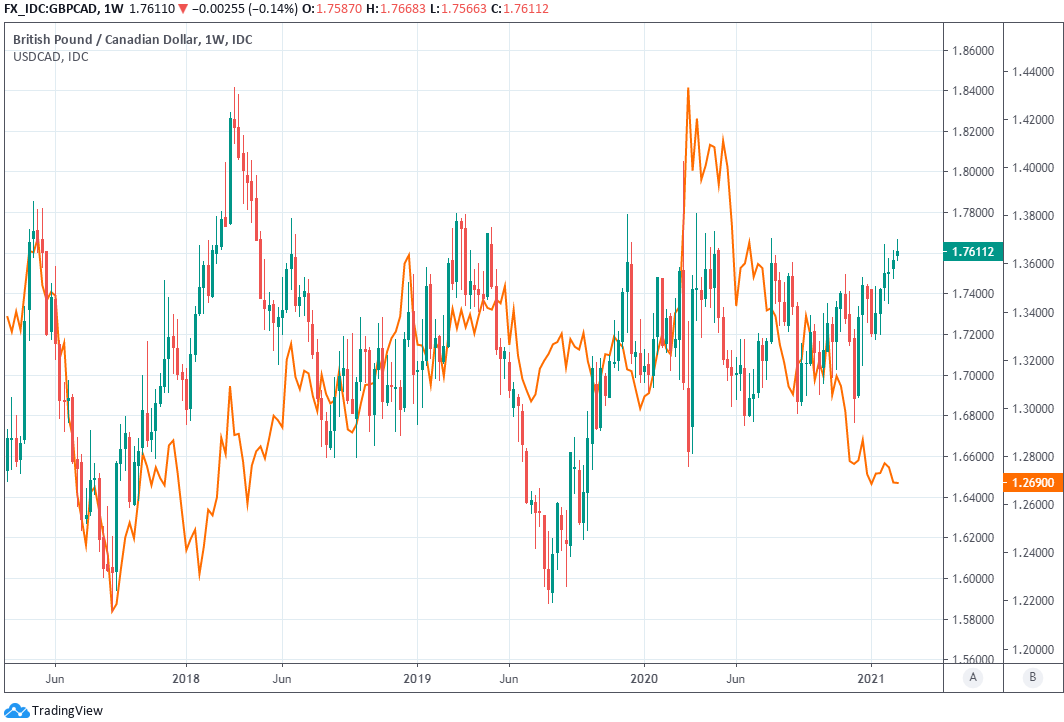 The above vaccination mismatch, combined with frequently iterated concerns of the European Central Bank (ECB) about increases in Euro exchange rates, has helped to compel a reappraisal of the outlook for Sterling.

"The news is getting a little better in the UK: the government has hit its vaccination target, COVID-19 infection numbers are down sharply, the BoE's chief economist describes the economy as a "coiled spring", and the market has shifted from speculating about negative policy rates to pricing in a rate rise over the next three years," says Elizabeth Martins, an economist at HSBC. "We still see UK GDP a little lower at end-2022 than it was at the end of 2019, largely due to weak exports in the wake of Brexit and a degree of permanent scarring. We also still expect the BoE to announce a GBP100bn extension of the QE programme in May: even with the good news, the end of the year seems a little early to be withdrawing stimulus. We do note growing risks to this view."

Pound Sterling Live reported in early December how the British currency was becoming a then-contrarian's contender for outperformance this year. 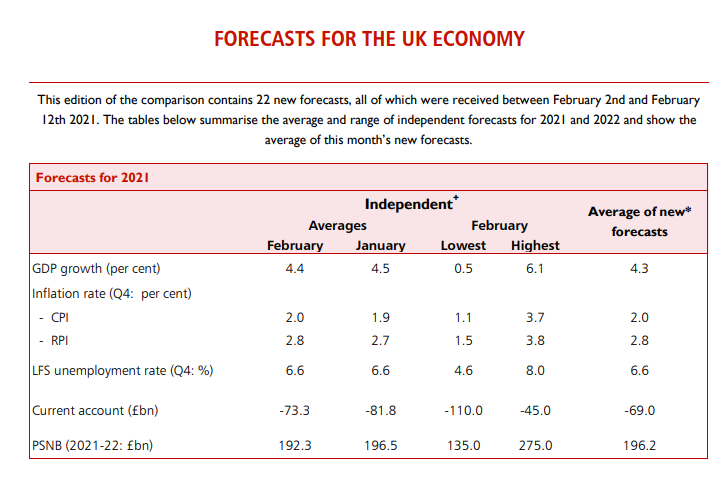 "As we have shown in previous business cycle analysis, GBP tends to outperform in recoveries and underperform in recessions. The underperformance this year due to lockdowns could lead to a complete reversal of that narrative thanks to re-openings giving the UK economy and GBP the most to gain from a vaccine rollout in the G10," writes Jordan Rochester, a strategist at Nomura, in a December research note.

Economists have since and on average shaved around -0.2% off of their UK GDP forecasts for 2021, monthly data from HM Treasury shows. It's possible that pending upgrades to forecasts are not yet reflected in data conveyed by third party vendors and so also HM Treasury's tables.

"It took about three days, but in the end a reporter from the Financial Review decided to cover the ECB's decision to tweet a Valentine's Day poem about 'easy financing conditions', owing to the less-than-favorable response to the tweet from other Twitter users," says Stephen Gallo, European head of FX strategy at BMO Capital Markets. 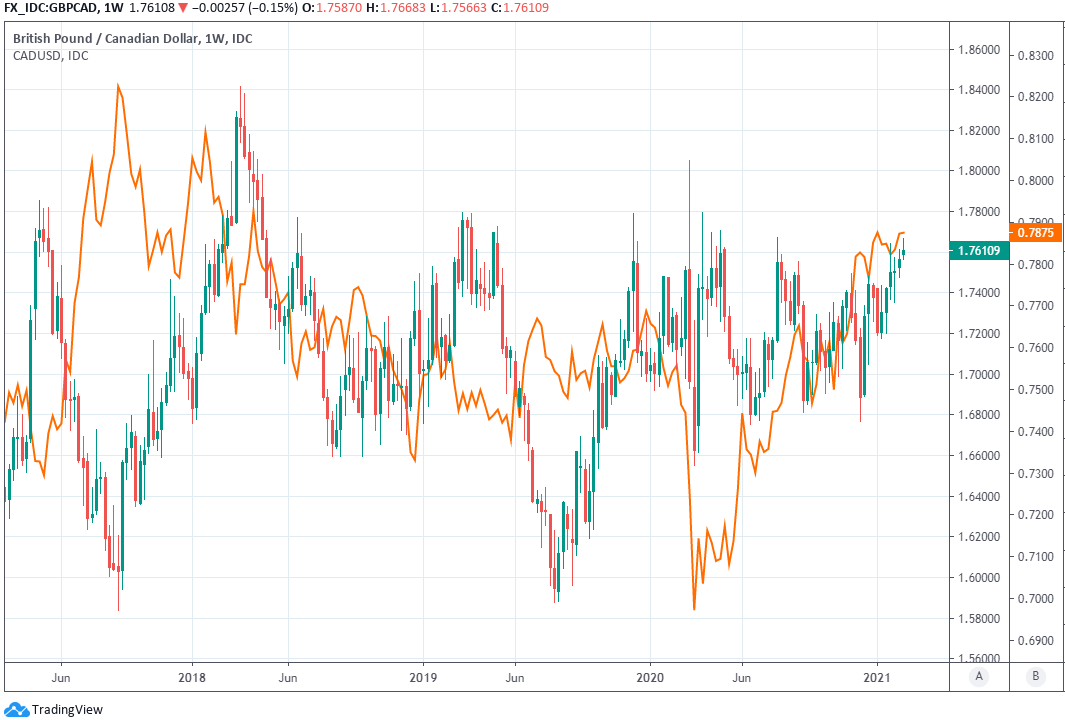 "We suppose FX investors long of the EUR need to view this scenario with caution; firstly, because of the dovish implications of the tweet for monetary policy, and secondly, because faith in the EU's institutions is never far from teetering. Note: the EU had vaccinated just 5.02% of its population as of yesterday, which means many millions of people missed Valentine's Day," Gallo writes in a Wednesday note to clients.

Many analysts are now looking to 1.40 and above for the main Sterling exchange rate GBP/USD this quarter, while some even see GBP/USD rising as far as 1.43. For mechanical reasons, it would be necessary for GBP/USD to advance in this way if the evolving UK-EU economic outlook is to be reflected in the GBP/EUR rate, but when combined with outlooks for USD/CAD these forecasts point GBP/CAD to a one-year high of around 1.80.

"Our fair value estimate suggests equilibrium, based on spreads and commodities, is edging a little further below 1.24. This should limit scope for USD gains to the low/mid 1.27s at least," says Juan Manuel Herrera, a strategist at Scotiabank, of USD/CAD. "Intraday price action suggests some potential for the USD to squeeze a little higher above 1.2650 but USD strength to the upper 1.26s is likely to generate renewed selling pressure."

GBP/CAD always closely reflects relative moves in the main British and Canadian exchange rates, for reasons relating to the market's underlying mechanics. Sterling would rise to 1.80 against the Loonie fairly soon in the event that GBP/USD reaches 1.43, even if USD/CAD declines back toward 1.26.

Should the Canadian Dollar be slow in pushing the greenback that far to the downside, Sterling may even temporarily see levels above 1.80 against the Loonie. Meanwhile, BMO Capital Markets looks for a similar scenario to play out, although one which only takes GBP/CAD as far as around 1.79.

"We look for the GBP to claw back more of its earlier losses over the next 3M as non-resident investors rebuild their UK exposures. Our 3M GBPUSD and EURGBP views are 1.42 and 0.8590, respectively. The UK’s successful vaccine rollout puts the economy in a relatively good spot; now there are indications that GDP estimates for 2020 may have overstated the true contraction in output," says BMO's Gallo. "We look for CAD to slowly rally to 1.26 in 3M."