- GBP/CAD at top of multi-week range
- But may fade over virus measures.
- Extended lockdown, PMIs risk a soft start for GBP/CAD.
- Brexit in focus thereafter, may see 1.7641 on progress.

The Pound-to-Canadian Dollar exchange rate has hit new week near three-month highs at the start of the new week having hit 1.7428 at one point on Monday, but enthusiasm will be contained by persistent Brexit-related risks and the trajectory of stock markets will be a key influence on the Canadian Dollar in coming days.

Pound Sterling was carried higher last week amid speculation that a Brexit trade deal could be struck over the coming days, leaving GBP/CAD near to 1.74 and three-month highs, although it risks a setback on Monday when investors weigh the likely cost of enhanced and extended coronavirus containment measures.

Meanwhile, the USD/CAD enters the new week in a neutral position around the middle of a range anticipated by local analysts, which would be enough to place the Pound-to-Canadian Dollar rate in a position of vulnerability from the onset even without the risks faced by Sterling.

An effective prolongation of the UK 'lockdown' and IHS Markit PMI surveys, which are set to provide an early estimate of the damage already done to the economic recovery by November's national shut-in, will set the Monday morning scene for the Pound.

"The week ahead is likely to see the short-term pattern of the CAD tracking US stocks closely repeated," says Shaun Osborne, chief FX strategist at Scotiabank. "Our week-ahead model continues to flag modest upside risks for the USD next week (1.3085) in a broad range two big figures either side of that."

Scotiabank sees the main Sterling exchange rate GBP/USD supported around 1.32 in response to weakness which, if combined the 1.3085 anticipated average for USD/CAD in the coming days, implies a GBP/CAD decline to around 1.7272 if the Pound falls from favour with investors. 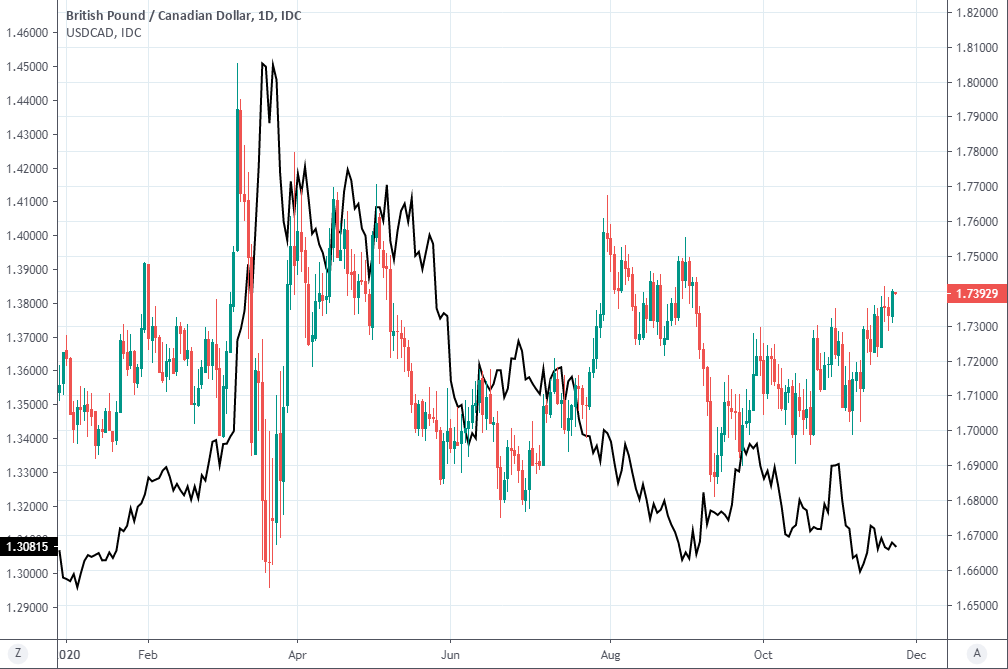 GBP/CAD ended the week at 1.74 although this marks the top of Sterling's likely range for the week ahead if a Brexit trade deal remains elusive and GBP/USD is unable to clear the 1.3310 threshold.

"GBP has merely built back its losses through yesterday’s session which followed a short-lived push above 1.33 on Wednesday as the big figure acts as a firm ceiling," says Scotiabank's Juan Manuel Herrera. "The week’s narrow range seems to reflect poor conviction in the GBP extending its latest rally toward its year-to-date high of 1.3482."

If Pound Sterling is able to overcome the 1.33 threshold against the greenback and advance to September highs at 1.3482 as USD/CAD averages 1.3085 then the Pound-to-Canadian Dollar rate would be found trading as high as 1.7641, although this might require tangible progress toward a Brexit deal that remained lacking at the weekend.

"USD/CAD has been on a stable depreciating trend in the second half of this week, as the loonie is enjoying a stabilization in oil prices and a still positive domestic data story (good retail sales figures today being a case in point). Next week, we won’t see much on the domestic data front, so global developments and oil will likely remain the only drivers," says Francesco Pesole, a strategist at ING. "USD/CAD may test the key 1.3000 support."

Pressure on GBP/CAD would be exacerbated if USD/CAD declined to 1.30 and Sterling was unable to also advance against the U.S. Dollar. But with GBP/USD entering the new week near resistance at 1.33 and vulnerable to lockdown-inspired weakness, this too may be unlikely without firm Brexit progress.

"Fair value is now up to 1.3084. Our model continues to weight the S&P 500 index as its best predictor of USDCAD, but the weight of SPX is receding while the weight of the Bloomberg Commodity Index is rising," says Greg Anderson, CFA and global head of FX strategy at BMO Capital Markets. "With the US election and presumably the biggest vaccine news now in the rearview mirror, OPEC+ may increasingly become the driver for USDCAD. Unless OPEC+ shows strong signs of breaking apart, we like being short USDCAD above 1.3150, but we'd be trimming that position at about 1.3030 because we think it will be hard for the pair to durably break below 1.3000 this year." 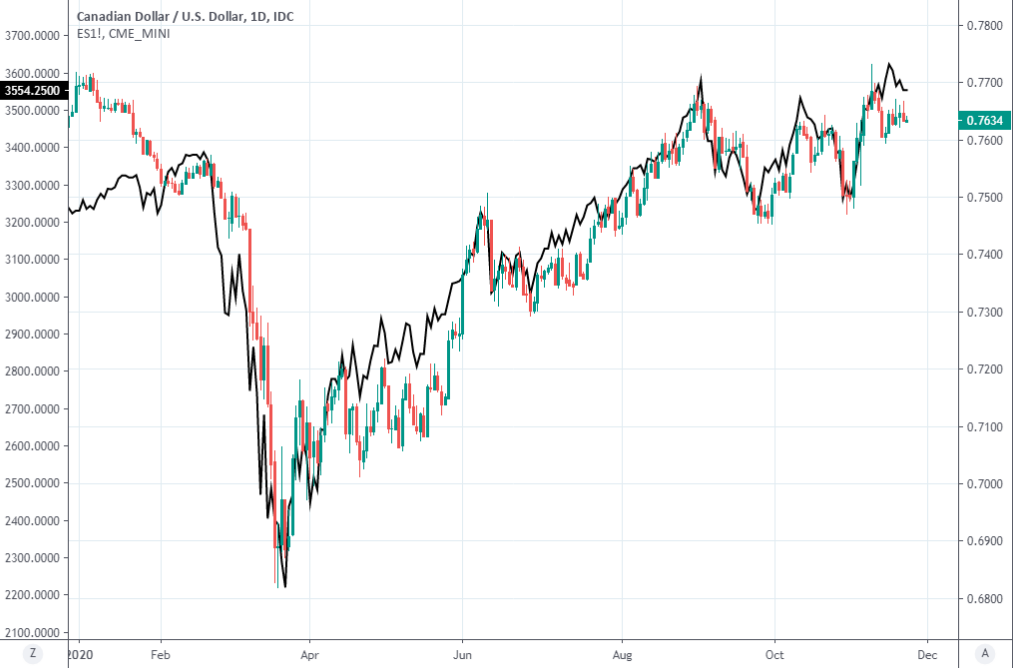 The rub for the Pound however is that negotiators could have more time to clinch a deal than was previously thought after EU ambassadors were reported by RTE on Friday to be mulling the idea of "provisional application" that would see a last minute deal implemented in part without first having been ratified in each member state's parliament.

"If agreement cannot be reached next week, the deadline will be pushed back into December. There is talk of having something ready for the 10 December EU Council meeting, which the EU Parliament could then ratify on 16 December. Failing that, an emergency EU parliamentary sitting could be set for 28 December and, as a last straw, the EU Council could ratify a deal without reference to MPs on 31 December," says David Croy, a strategist at ANZ.

Keeping the two sides from a deal are Brussels' contentious demands that it retain as well as enhance its influence and control over various British policy areas, even after December 31 when the standstill transition ends and the country is supposed to become independent of the bloc.

With Brexit talks, coronavirus concerns and Monday's IHS Markit PMI surveys aside, Sterling will take its cues from Wednesdays spending review by Chancellor Rishi Sunak, which is yield further support for companies and households as they grapple with enhanced government restrictions on activity.

Canada's Dollar will take its cues from the stock markets its followed closely for months as well as oil prices, which may themselves be sensitive to coronavirus developments across North America. Price action in the Euro will also be important too, given its impact on the Dollar Index that USD/CAD also follows.

"In Canada, only the payrolls data are due, and since they lag so far behind the household survey measure of employment, they don’t tend to be market movers. Instead, eyes will be on provincial leaders wrestling with decisions on whether to further constrain activity in the face of a strong second wave of Covid-19," says Avery Shenfeld, chief economist at CIBC Capital Markets. 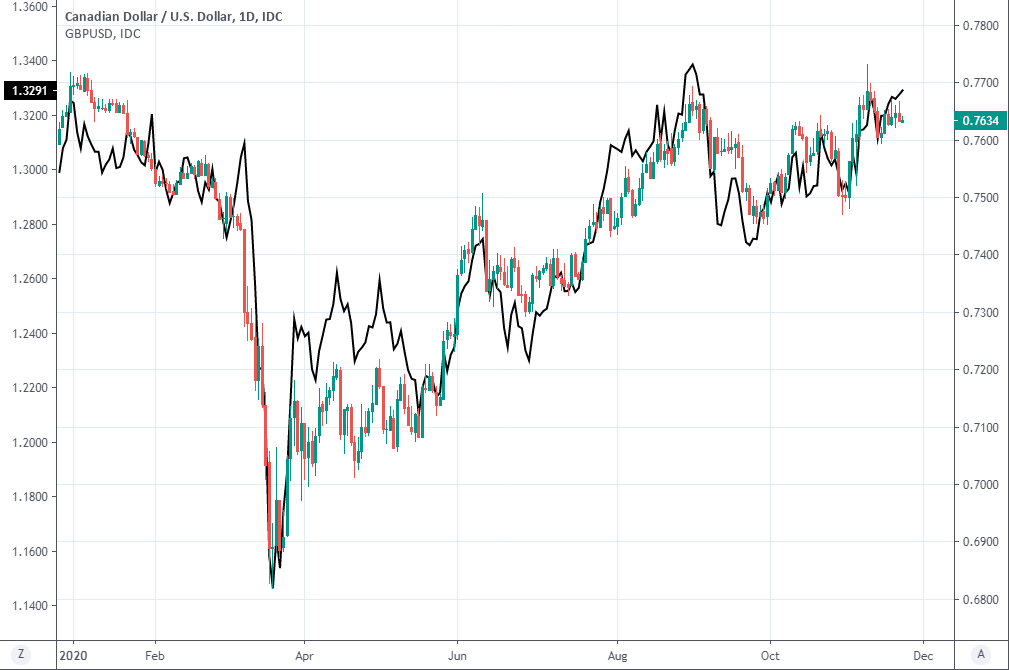 Above: CAD/USD at daily intervals alongside GBP/USD (black line, left axis). GBP/CAD price action is heavily influenced by which currency wins an ongoing race against the U.S. Dollar.

The Pound-to-Canadian Dollar exchange rate enters the new week near three-month highs but at risk of declines as investors digest the latest coronavirus developments in the UK, while the ongoing Brexit talks and trajectory of stock markets will be key influences over the subsequent days.