The Pound-to-Canadian Dollar exchange rate remains towards the top of a multi-week range as markets hold a cautious optimism that Brexit trade talks will succeed, but a look at the options markets and some investor forecasts warn of significant price moves ahead.

Hedging activity in the options market and buy-side investor forecasts tell of a significant rally that some investors believe could follow a deal, but they also tell of substantial risks in the event of failure.

Sterling had underperformed on Thursday as a long-assumed deadline for talks lapsed, which may have incited bids for the huge $500BN GBP/USD put option recorded by The Depository Trust & Clearing Corporation (DTCC) that noon.

"A massive GBP/USD 1.2500 put option trade (worth 500BLN USD, expiring 12/28) also crossed the DTCC tape around this time. Was this a “no-deal” Brexit hedge?" asks Eric Bregar, head of FX strategy at Exchange Bank of Canada, "A large amount of sub-1 month, out-of-the money, EURGBP puts (576BLN GBP) also traded today, which theoretically flies in the face of a “no-deal” Brexit outcome, and so perhaps spot sterling traders shouldn’t get too carried away."

It was previously suggested in Europe that Thursday was the last chance for a deal to win the endorsement of EU leaders and be ratified in all of the bloc's parliaments before for the year-end expiry of the transition period.

The possibly related $500BN GBP/USD derivative has a strike price of 1.25 and reflects significant  demand for protection against a fall below that level, which would put significant pressure on the Pound-to-Canadian Dollar rate if seen in response to either a 'no deal' Brexit or any other factor.

At Friday's USD/CAD level of 1.31, a GBP/USD rate of 1.25 would be low enough to send the Pound-to-Canadian Dollar rate down to 1.63762, although many analysts have said that losses would likely be even larger if the talks fail.

Negotiations continued Friday although increasingly they look set to go down to the wire with French President Emmanuel Macron and Belgian Prime Minister Alexander De Croo having called for increased 'no deal' contingency planning. 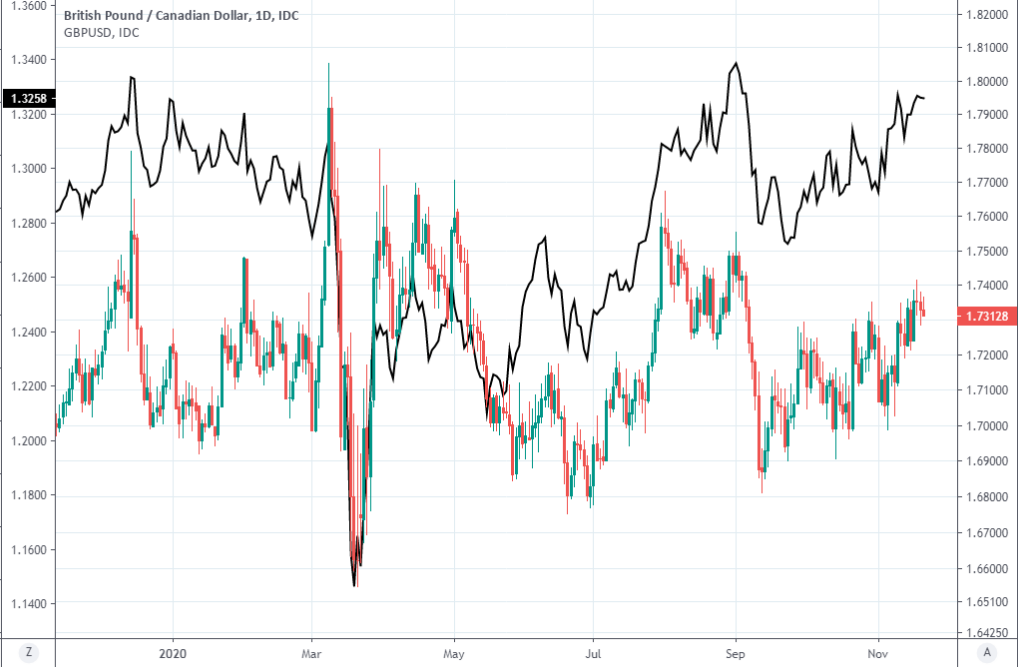 "Despite the acrimony even now between the negotiating teams, the UK and EU will very soon announce they have achieved a Brexit Deal," says Dr Savvas Savouri, chief economist at Toscafund Asset Management, a London based multi-asset investor with around $4 bn under management. "As for the concern that conflicting UK & EU fishing and farming interests will derail a deal, it is absurd. A deal will be reached that finally ends five years of interminable uncertainty and eliminates the risk of tariffs and disruptions to the flow of people and products; real and financial."

Despite Thursday's lapsed deadline, there was support this week for Savouri's idea that negotiating deadlock will eventually be broken by an announced agreement that averts a bilateral default to a trade relationship governed by World Trade Organization (WTO) terms from January 01.

Wednesday's report from Times Radio's chief political commentator and former political editor for The Sun, Tom Newton Dunn, offered exactly that when suggesting that a deal may already be largely in the bag and that what remains to be resolved are simply questions of semantics.

"Big push back from No10 today on suggestions. Senior folk in Brussels as well as SW1 also don't think so, because the politics aren't quite right yet. Why? Because Dom Cummings' departure has actually made it harder for the PM to compromise," Newton Dunn wrote in a post to his Twitter account.

Keeping the two sides from a deal are Brussels' contentious demands that it retain as well as enhance its influence and control over various British policy areas, even after December 31 when the standstill transition ends and the country is supposed to become independent of the bloc.

Brussels wants to set British policy and have the ability to impose financial and trade penalties for non-compliance with its own policies in a vast array of areas including state aid for companies, environmental matters and even on tax questions where it never had competence when the UK was an official member.

The bloc is effectively seeking a colonial relationship, against which the incumbent British negotiator David Frost has stood firm, saying of his position on Sunday that "I will not be changing it." This however, didn't rule out a still-possible intervention from Prime Minister Boris Johnson. 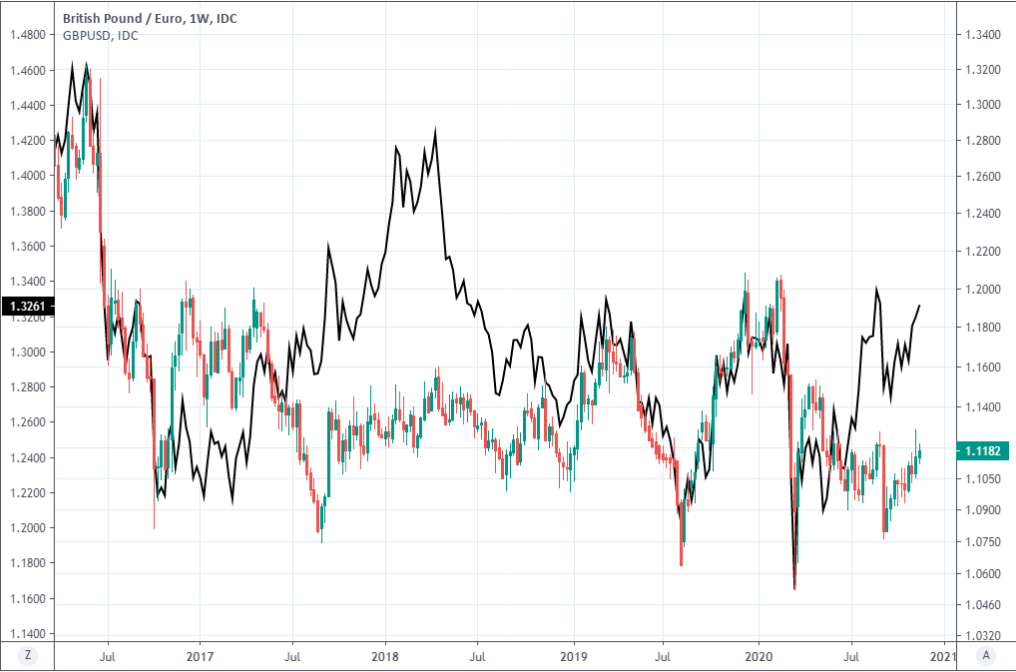 "It will prove to be a deal that clears a very troubling dark cloud which has hung over the pound and sends it, markedly, higher as a result," Savouri says. "Specifically, I have no doubt sterling will sharply gap-up to at least 1.3 against the euro and 1.6 relative to the dollar – with all the related correlates." (Read more about Savouri's forecasts for GBP/EUR and GBP/USD here).

Savouri, also a partner at Toscafund, has an outright bearish view on the U.S. Dollar which he expects to fall against Sterling over the coming year as the Chinese economy and its Yuan currency enter 2021 resurgent as well as unencumbered by President Donald Trump's pursuit of a 'decoupling' between the world's two largest economies. The UK economy and cheap Pound Sterling are expected to be a prime beneficiary of this.

"To understand my non-consensus views one needs to appreciate the Triffin Dilemma the US has long faced, which will soon be exposed or resolved," Savouri says. "Understand too how Beijing has until now managed its economy, and how its management will adjust to ensure China’s speediest possible post-Covid economic rebound. I believe the dollar is on the cusp of losing its exorbitant privilege as the world’s foremost reserve currency."

With the global economy submerged beneath a second wave of coronavirus restrictions, the outlook for Chinese exports to developed markets is shrouded in uncertainty. Under these circumstances, Savouri and the Toscafund team doubt that China's government will stake its own economic recovery on western governments' ability to contain the sometimes pneumonia-inducing virus which is thought to have escaped Chinese borders in January. Instead, they see China further easing regulatory capital requirements on the domestic banking sector to support new lending and also cashing in foreign exchange reserves that are held in the U.S. treasury market, with adverse consequences for the U.S. Dollar.

Sterling is often said to have the strongest sensitivity to movements in the Yuan of all major currencies despite the UK having a lesser trade relationship with China than other major economies, which means the Pound could rise by default alongside the Yuan next year. 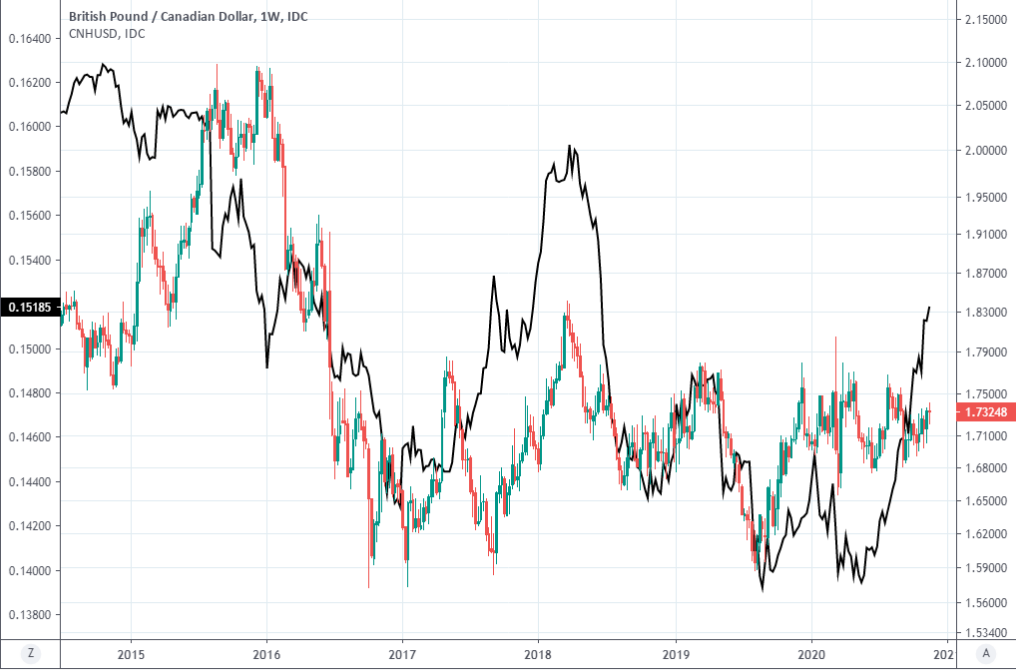 Savouri is looking for Sterling's performance to be bolstered by Chinese firms making the UK a "Western-Hub," while British schools and universities become ever more preferred places of study for Chinese students.

This is an important part of why he and Toscafund see scope for a Brexit deal to ignite outperformance by Sterling, driven by a GBP/USD surge up to 1.60, which could have significant implications for GBP/CAD.

At such a level of GBP/USD, the Pound-to-Canadian Dollar rate would rise to 1.92 and its highest since just before the Brexit referendum even if USD/CAD somehow made it down to 1.20, which is more or less its lowest since before the 2014-to-2016 oil price collapse.

Combining a 1.60 GBP/USD rate with Friday's 1.31 USD/CAD implies a GBP/CAD rate that trades around 2.09 and at a level not seen since the 2008 financial crisis if a fleeting period between October 2015 and January 2016 is overlooked. GBP/CAD always closely reflects relative price action and value between GBP/USD and USD/CAD for reasons relating to the mechanical plumbing buried in the walls of the foreign exchange market.

"The fateful blow for this will be delivered by Beijing, in a move long demanded by Capitol Hill in a bipartisan way," Savouri says. "There will be those who will claim it happened without warning. Those claiming as much will have clearly been negligent in failing to see the all too clear signals sent over recent years. Beijing has after all been systematically disintermediating the dollar from its commercial and financial system. It has: signed currency swap arrangements all over the world; run down its Treasury holdings, by spending them on assets around the world and adapted its yuan management from a strict bilateral approach relative to the dollar, to a multi-currency one." 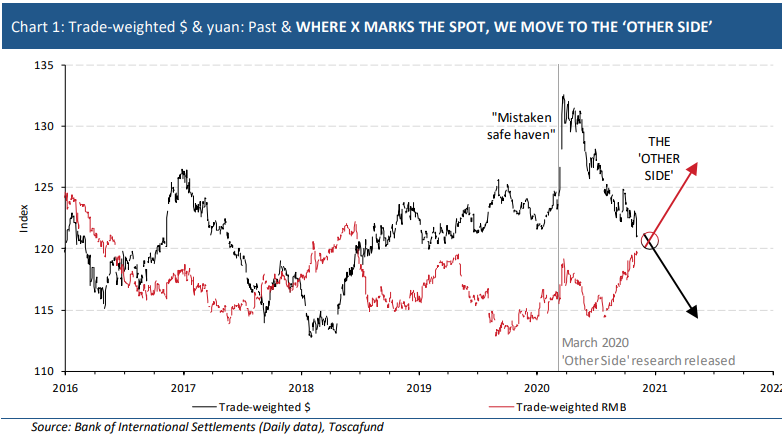