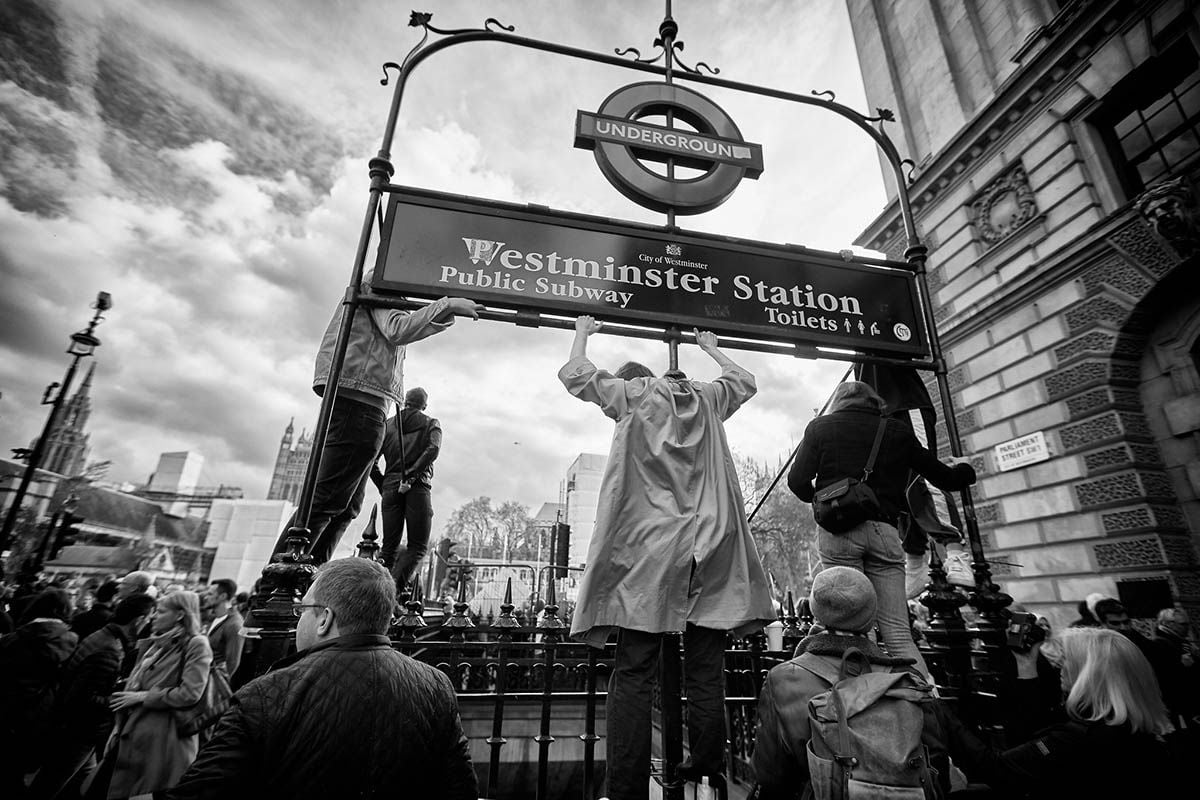 Pound Sterling was volatile again Friday after the European Union neglected to vary by much the mandate of negotiator its Brexit negotiator Michel Barnier, inviting in the process a backed-into-a-corner Prime Minister Boris Johnson to follow through on earlier threats to walk away from the table.

“We were totally clear that we wanted nothing more complicated than a Canada-style relationship, based on friendship and free trade. To judge by the latest EU summit in Brussels that won’t work for our EU partners. They want the continued ability to control our legislative freedom, our fisheries, in a way that is obviously unacceptable to an independent country,” Johnson said in a Friday speech. “Given that this summit appears explicitly to rule out a Canada-style deal, I have concluded that we should get ready for January 1 with arrangements that are more like Australia’s based on simple principles of global free trade.”

Prime Minister Johnson echoed a European Council statement on Friday when he said that preparations for a trade relationship “more like Australia’s” are to be ramped up, which means the British government is preparing for a life without any form preferential trade agreement with European Union countries.

But crucially for Pound Sterling; he didn’t rule out continuing talks with the other side in the hope that an agreement may be reached ahead of the Monday arrival in London of Brussels’ Michel Barnier, who’s the EU Commission’s as well as members’ negotiator. 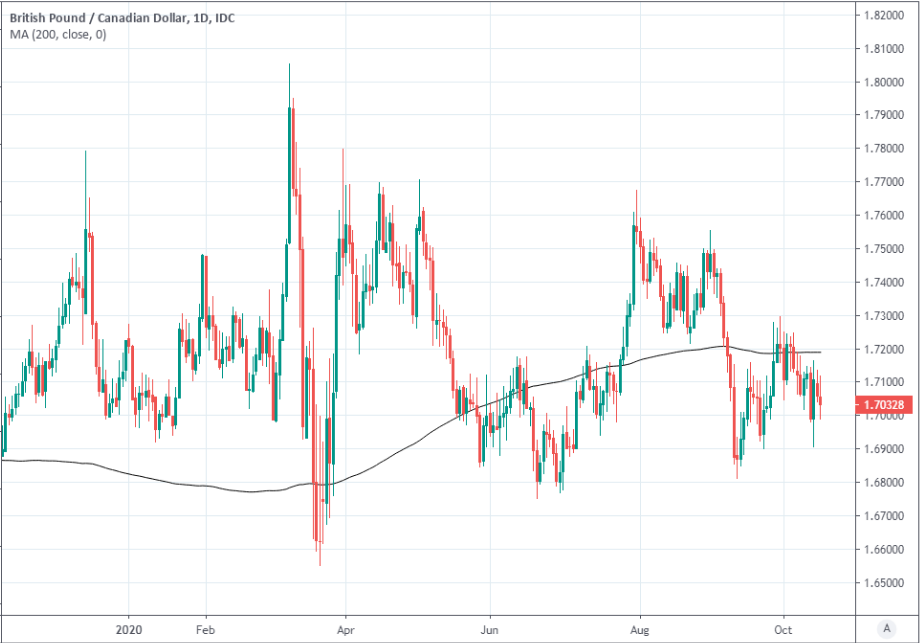 “The European Council will remain seized of the matter,” concludes a Thursday statement from the EU’s chamber of national leaders, which is separate to the EU’s executive commission but headed by a non-voting member of the latter. “The European Council invites the Unionʼs chief negotiator to continue negotiations in the coming weeks, and calls on the UK to make the necessary moves to make an agreement possible.”

The EU’s statement led Johnson to conclude that “unless there is some fundamental change of approach,” it will not be possible to secure a simple free trade deal with the EU. He says the government will now focus on containing the coronavirus, which saw new restrictions imposed on London and other parts of the UK this week, as well as on “building back better.”

Afternoon media reports citing a Downing Street spokesperson suggested Michel Barnier had been told not to come to London unless willing to “discuss all of the issues regarding a legal text” or all of the practicalities around a ‘no deal’ Brexit. So while Sterling has stabilised and the talks are potentially ongoing, the British currency remained a long way above its earlier 2020 lows against all major rivals and even further from being out of the ‘no deal’ Brexit woods.

“The UK government appears willing to exit the European Union at the end of the year without a trade deal to govern the post-Brexit environment. This will cloud economic prospects and weigh on the GBP in the early part of 2021. We do think, however, that a fair bit of negative news is already factored in to the GBP and weakness may be limited and temporary,” says Shaun Osborne, chief FX strategist at Scotiabank in a review of forecasts earlier this week.

Osborne and the Scotiabank team say that a ‘no deal’ Brexit would put the Pound under pressure but that its main exchange rate, GBP/USD, would likely encounter strong support once back below 1.25. 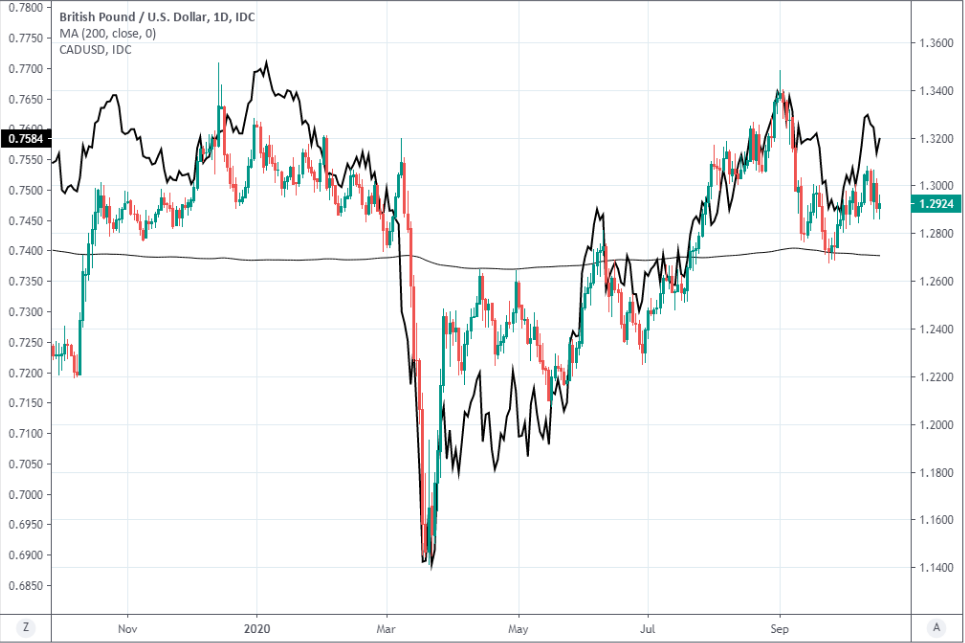 The GBP/USD outlook, when combined with forecasts for a year-end USD/CAD rate of 1.32 that falls to 1.30 by the end of March 2021, suggests the Pound-to-Canadian Dollar rate could slide to 1.62 in the event that trade talks fail.

“A positive surprise may yet still emerge, possibly one which punts a final agreement further down the road, but (at writing) time is running very, very short,” Osborne says.

Such losses however, are seen as likely to be temporary. This is not least of all because of extreme weakness in the U.S. Dollar this year, which has prevented GBP/USD from sustaining a fall below its 200-day moving average that was located at 1.2707 on Friday. The Pound hasn’t closed below there at all since late July, not even in September when Johnson laid the legal foundations for a working unilateralist interpretation of the EU Withdrawal Agreement.

Absent a ‘no deal’ Brexit from the transition on December 31, the closest thing to a true and hard deadline in the negotiations, Scotiabank looks for GBP/USD to end the year up at 1.29, exactly its Friday level, before rising to 1.30 in March 2021. This implies a Pound-to-Canadian Dollar rate that holds steady around 1.7029 into the year-end before falling back to 1.69 in the first quarter of the New Year as USD/CAD falls from an anticipated 1.32 to a forecast of 1.30.

"Moreover, the Canadian rebound may be flattening out and prospects still hinge significantly on the evolution of the US recovery where additional fiscal support may not emerge until next year now," Osborne says. "Speculative sentiment has not bought into the CAD recovery and investors have maintained a persistently bearish view of the CAD since the March low. We have been more constructive on the CAD’s outlook but now rather think the rebound may have extended a little too far. We look for firm technical support in the 1.30–1.31 range in the next few weeks and for USDCAD to nudge higher towards 1.32.” 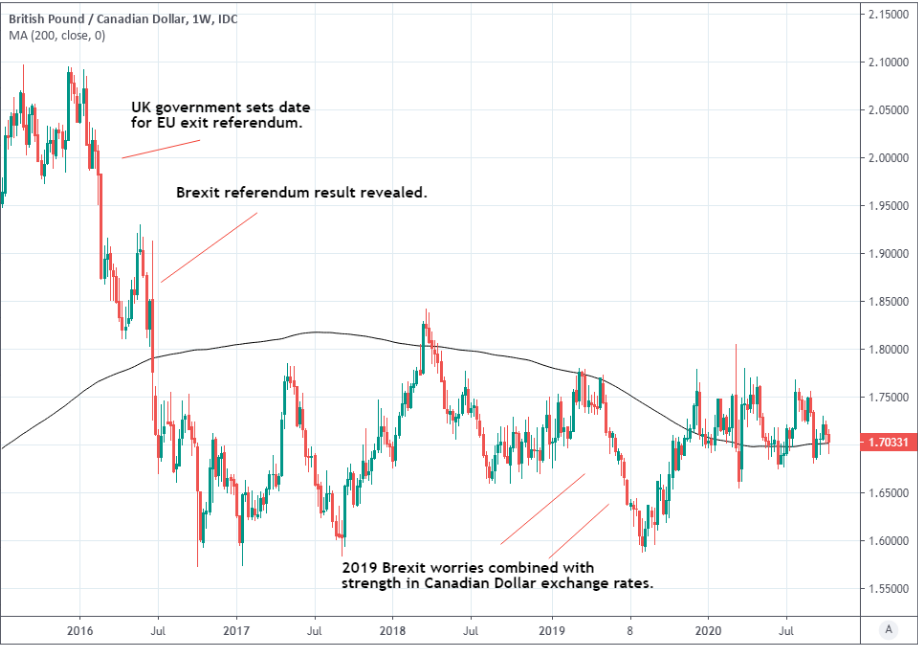 Above: Pound-to-Canadian Dollar rate shown at weekly intervals with, recovering above 200-week average on Friday.