The Canadian Dollar advanced against the U.S. Dollar and Pound Sterling Friday, breaking above a resistance level against the former in the process, as the Loonie celebrated a September jobs blowout that provides further evidence of a labour market recovery in progress.

Canada’s economy created or recovered from the coronavirus 378.2k jobs last month, up from 245.8k previously and leading the unemployment rate to fall from 10.2% to 9% in a straight line, with both numbers significantly exceeding market expectations.

“Restrictions had been substantially eased across the country and many businesses and workplaces had reopened. Throughout the month, some restrictions were re-imposed in response to increases in the number of COVID-19 cases. In British Columbia, new rules and guidelines related to bars and restaurants were implemented on September 8. In Ontario, limits on social gatherings were tightened for the hot spots of Toronto, Peel and Ottawa on September 17 and for the rest of the province on September 19,” Statistics Canada says.

Markets had been looking for only 150k new or recovered jobs to be announced and for the unemployment rate to fall only as far as 9.8%, September’s report was a meaningful positive surprise for the market and one that bodes well for the economy and Canadian Dollar in light of what it could mean for Bank of Canada (BoC) interest rate policy further down the line. 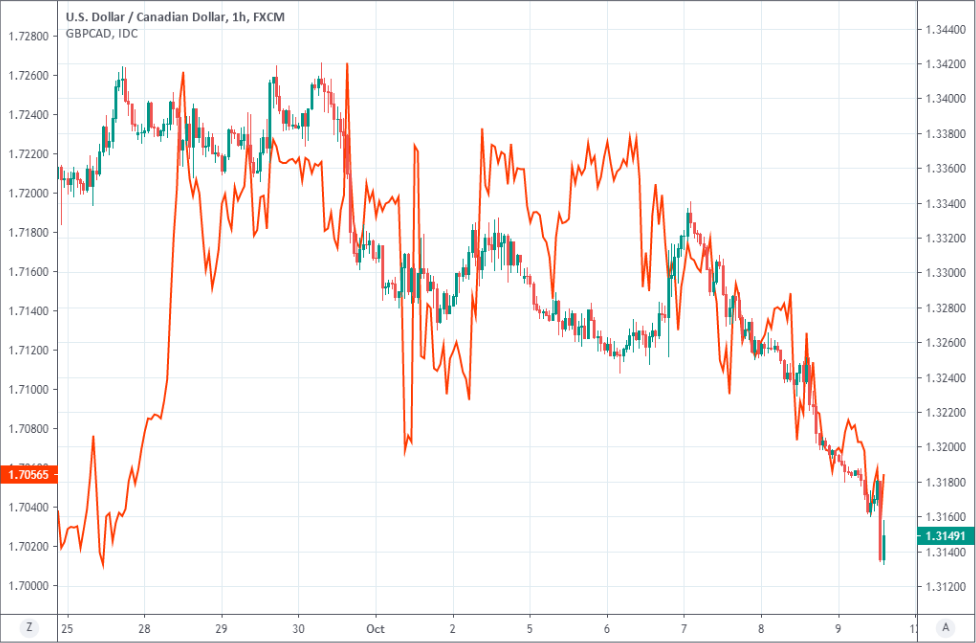 "Back-to-school translated into back-to-work for many Canadians in September," says Royce Mendes, an economist at CIBC Capital Markets. "Even with the recent gains, however, the economy is still operating with 720K fewer jobs than in February. The country is now faced with new virus cases clearly trending in the wrong direction, threatening to upend the labour market recovery. As a result of that exogenous development, not much can be extrapolated."

The BoC has said Canada's main interest rate will be left at its current record low of 0.25% until “economic slack has been absorbed so that the 2 percent inflation target is sustainably achieved," which leaves the interest rate outlook hinged substantially upon developments in the labour market. Inflation is thought to be senstivive to GDP growth, which is itself heavily influenced by changes in employment and wage levels.

"The numbers will do little to calm concerns that the broader pace of the recovery in labour markets is slowing. The initial recovery in employment has been led by the return to work of those on temporary layoff from the spring. But there were still over 700k more people on permanent layoff in September than a year ago, and those numbers have been dropping more slowly," says Nathan Janzen, a senior economist at RBC Capital Markets. "The pace of growth in other economic indicators has generally remained positive but is also slowing (with the exception of booming housing markets over the summer). And the larger concern remains the extent to which the latest round of virus spread will prompt additional containment measures and keep more households at home."

Canada, much like other countries including those in the United Kingdom, continues to be burdened by varying levels of government restriction of activity, which have placed a question mark over the economic outlook into year-end.

But this didn't stop the Loonie winning back more ground previously lost to a U.S. Dollar that was unravelling anew, while also advancing on Pound Sterling. 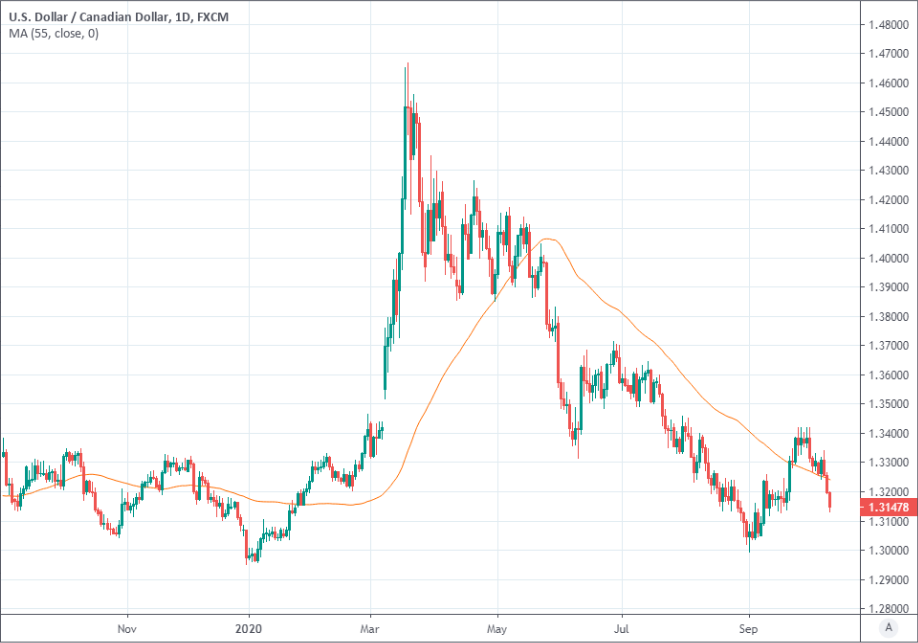 Above: USD/CAD shown at daily intervals with 55-day moving-average in orange.

“It’s taken a bit of time for USDCAD to react naturally to the downside, perhaps because of some new COVID lockdown rumors making the rounds re: Madrid and London around the same time the data was released but the market now has decidedly given up its attempt toregain the 1.3180-1.3200 support level,” says Eric Bregar, head of FX strategy at Exchange Bank of Canada. “We don’t think GBPUSD’s stick save recovery back into the 1.2930-60s means the market is out of the woods yet when it comes to bearish technical forces as the upper end of this channel is now very much acting as resistance."

Bregar says there's now not much of a technical impediement to further USD/CAD declines if the Canadian Dollar continues to rally, and also that if Sterling happens to end the week "below the 1.2930s" then the British currency would be vulnerable to ongoing declines against the U.S. Dollar.

Simultaneous falls in USD/CAD and GBP/USD are about the most bearish recipe that it's possible to get for the Pound-to-Canadian Dollar exchange rate, which slipped below 1.71 and was last seen approaching 1.70 late on Friday. Both of the former exchange rates have a substantial influence on the latter. 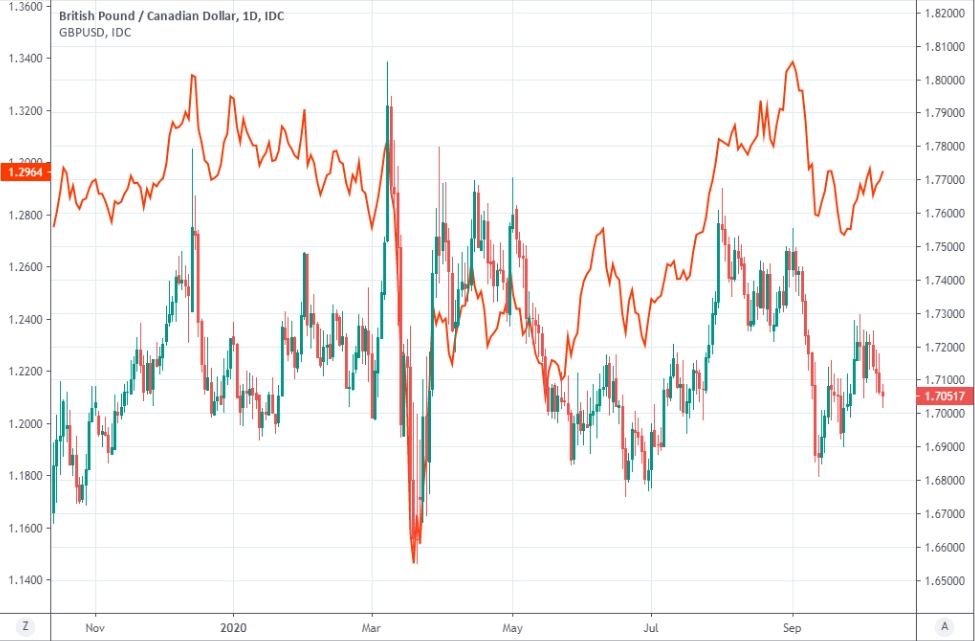 "With local markets closed Monday for Thanksgiving, CAD activity may dry up fairly quickly," says Shaun Osborne, chief FX strategist at Scotiabank. "[USD/CAD's] push below the low 1.32 zone leaves spot testing the 200-week MA (1.3164) at the end of the week. Trend signals have picked up on the shorter term studies but remain weak on the longer run oscillators. We think the USD slide is looking somewhat over extended in the short run but there is scant technical evidence—aside from a minor squeeze higher on the hourly chart through late morning European trade—that the sell-off is reversing."

Pound Sterling was weaker against all major currencies other than the U.S. Dollar on Friday as a Brexit trade deal remained elusive in spite of rising market hopes for one and after August GDP data forewarned of a possibly bleak winter ahead, with the economy having struggled to grow even after benefiting from substantial HM Treasury support that has since been scrapped in some cases and which is soon to be pulled in others.

GDP grew 2.1% in August, slowing from a downwardly-revised 6.4% in July. The increase left economists, markets and everybody else empty handed in the face of a consensus expectation for a 4.6% gain. Services drove the bulk of the recovery that did materialise, with food and drinks trades leading the way after being lifted by Chancellor Rishi Sunak's innovative Eat Out to Help Out scheme, which ended in August.

"Soft data point towards the risk of more BoE easing eventually. The GBP largely ignored the data and only stumbled lower on the back of reports that UK/EU trade talks were not progressing," Osborne says. "Intraday price action is weak for Cable, with the GBP falling relatively sharply from the intraday high and reinforcing short term resistance near 1.2975. We see additional, strong resistance at 1.3005/10. Support at 1.2895/00 may be at risk early next week."