Sterling was wallowing in the red Tuesday with the Pound-to-Dollar rate leading the rout after the government announced a number of new and in some places farcical restrictions on freedoms for companies and households over what it says is a growing second wave of coronavirus infections.

Details of new diktats came amid a widespread rebound in Dollar exchange rates, with the U.S. currency having risen against every one of its major rivals in part due to fears for the European economic outlook as panic among the politicians proves almost equally as contagious as the virus itself.

“The UK PM has now added some renewed pressure to sterling after he announced new restrictions in the context of a “perilous turning point” on the coronavirus and all this GBPUSD volatility has seen USDCAD trade on both sides of yesterday’s chart resistance level in the 1.3310s,” says Eric Bregar, head of FX strategy at Exchange Bank of Canada.

It wasn’t just Sterling’s woes that weighed on GBP/CAD this Tuesday because Canadian outperformance was also a significant contributor too, with the Loonie having risen against all of its major rivals except for the U.S. Dollar. 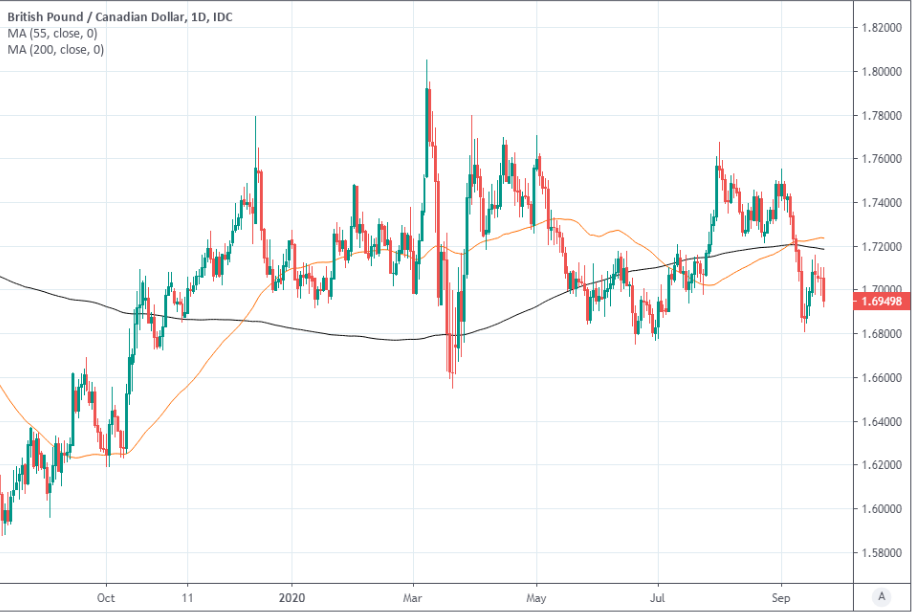 The Loonie often underperforms when the U.S. Dollar is in decline and outperforms in periods where it's making a comeback, as appeared to be the case on Tuesday. The greenback has risen after ebbing risk appetite prompted a sell-off in stock markets that has wobbled positively-correlated currencies, although USD/CAD has risen less than other U.S. exchange rates.

Some analysts say the Dollar rally could extend and lift USD/CAD as far as 1.35, implying further weakness for the main Canadian exchange rate, but absent a turnaround by the UK government or breakthrough in the Brexit talks this might only slow the pace of GBP/CAD’s decline rather than stop it.

“We expect the market to continue to cover USD shorts in the coming months, given covid uncertainty and election risk,” says Sarah Ying, a strategist at CIBC Capital Markets. “USD strength has pushed USD/CAD near the top end of our 1.2900-1.3350 range. If we take out 1.3350, the 1.35 level comes into view.”

Both exchange rates are integral influences on GBP/CAD price action and the latter GBP/USD level is currently being targeted by analysts at Commerzbank. 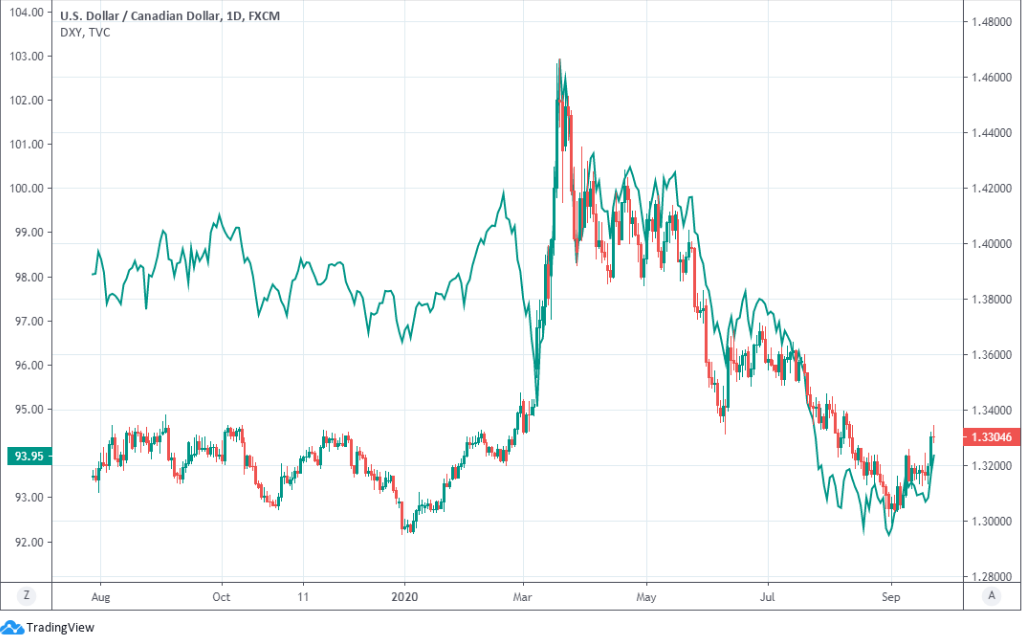 Above: USD/CAD shown at daily intervals alongside Dollar Index.

“Short-term valuation setup works against both EUR and CAD. They are among the two most expensive currencies across the G10, leaving them vulnerable to market sentiment shifts. Granted, CAD's positioning is not nearly as extreme as EUR, and yet it remains closely linked with our global macro risk indicator. The latter tells us that USDCAD should be trading around 1.35,” says Mark McCormick, global head of FX strategy at TD Securities.

Pound Sterling had enjoyed a tepid recovery earlier in the session after Bank of England Governor Andrew Bailey attempted to walk back some of the BoE’s earlier suggestions that it’s contemplating the implementation of negative interest rates. Bailey said the bank hadn’t threatened negative rates in its latest policy announcement and that policymakers are looking to understand more about the effect they'd be likely to have on the economy and financial system.

But gains didn’t last for long before the government instructed office workers to work from home again less than three weeks after pleading with firms and staff to return. It’s also ordered, among other things, that pubs and hospitality venues to close from 10pm although it’s not clear what this could achieve given late evenings might be some of the quietest times for the trade with weekends aside.

“These rules measures will only work if people comply,” Prime Minister Boris Johnson claimed in parliament on Tuesday. “The penalty for failing to wear a mask or breaking the rule of six will now double to £200 for a first offence. We will provide the police and local authorities with the extra funding they need, a greater police presence on our streets, and the option to draw on military support where required to free up the police. The measures I have announced all apply in England and the Devolved Administrations are taking similar steps.”

Yougov suggests approval of the government’s response has plummeted of late while Conservative Party donors are said to be dismayed with the schemes it's come up with while panic is yet to spread beyond Westminster and Whitehall. The government has declared some of the highest infection numbers since the peak of the first wave in recent weeks yet the number of new deaths has declined. Mortality has fallen from more than 15% to less than 0.005% last week, more than a month and two infection cycles after new infections began to frequently exceed 1,000 per day. 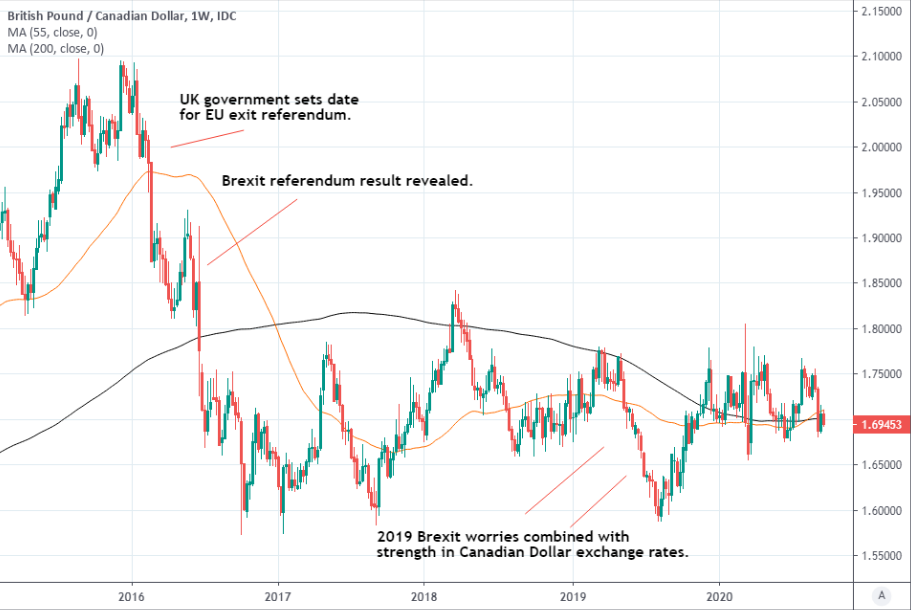