-GBP/CAD clutches for support but now lives on hope and prayer.
-GBP/CAD declines slowed as GBP’s losses lifted DXY & USD/CAD.
-GBP supported at 1.6700 on route to 1.6532 amid rising Brexit risk.
-But actual no deal exit could GBP/CAD to between 1.52 and 1.61.
-CAD outperformance threatened by BoC, OPEC, economic data.

The Pound-to-Canadian Dollar rate has been left clutching for support after is heaviest losses for six months but rising ‘no deal’ Brexit risks could mean there’s little respite to be had by Sterling in the coming days, where focus will be on London and Brussels as well as a nearby support level.

Pound Sterling was left as walking wounded by its steepest falls since March last week, although declines in GBP/CAD may have been tempered by losses in Canadian exchange rates heading into the weekend. Readers can get more on the Brexit state of play here and here.

USD/CAD rose with the Dollar Index that was itself lifted mostly by falls in Sterling, although the going could get harder still for Britain's currency if the market refuses to buy Prime Minister Boris Johnson’s insinuations about the controversial Internal Market Bill being little more than a negotiating tactic.

Canadian losses may have been aided by Bank of Canada Governor Tiff Macklem when he said Thursday the BoC will take the overall level of the Loonie into account when determining exactly how much support it should provide to Canada’s economy through quantitative easing.

“As no-trade-deal Brexit risks abound and some quarantine measures are re-imposed, markets expect the BoE to ease policy further; the UK’s DMO sold 6-mo bills today at an average yield of -0.0005%, marking the first time that investors agree to negative rates on short-term British debt. The BoE will announce its policy decision next Thursday where it is likely to keep its policy settings unchanged, but possibly warn markets of what’s coming. Expect the GBP to remain on a weakening trajectory over the coming weeks,” says Shaun Osborne, chief FX strategist at Scotiabank. “The pound is showing limited signs of a recovery from its losses for the month as it heads for a test of its 200-day MA at 1.2737 that stands as the only clear support ahead of the 1.27 mark. On the weekly charts, the 50- and 100-week MAs have converged almost exactly at 1.2750, with a close below this point this week acting as a clear bearish signal.” 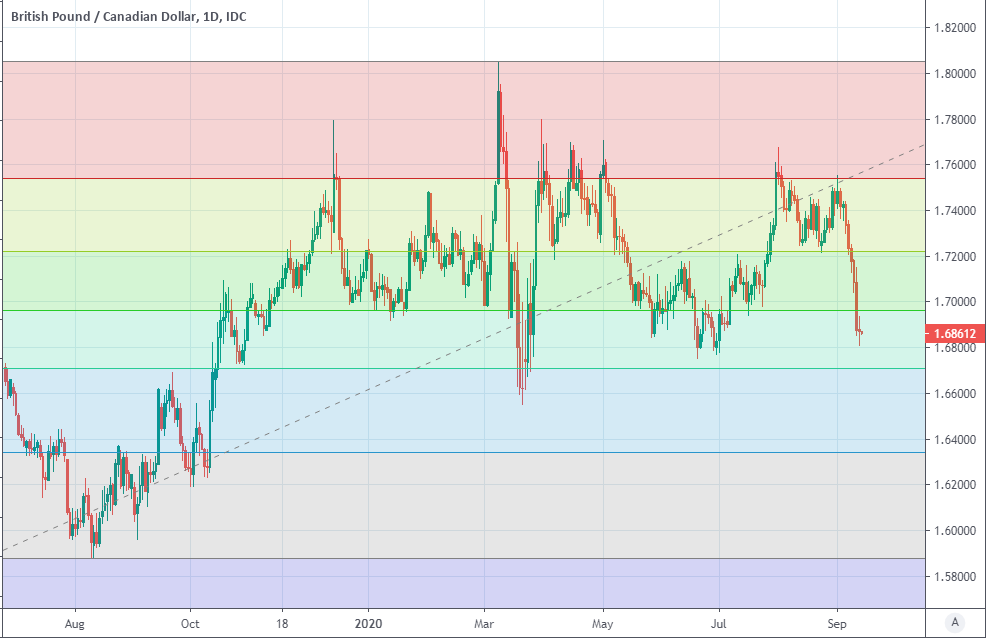 Scotiabank is looking for USD/CAD to climb up toward the low 1.32 area while trading in its current 1.30-to-1.34 range which, when combined with the bank’s anticipation of a GBP/USD fall back to 1.27, implies only a modest decline for a Pound-to-Canadian Dollar rate that should then slide back to around 1.6796.

But the bank has warned that steeper losses are possible both over the coming days as well as in the weeks ahead while others including ING are looking for GBP/USD to slide back toward 1.25, which would push the Pound-tp-Canadian Dollar rate down as far as 1.6532.

“The declining oil price has weighed on CAD, with the currency being one of the underperformers in the G10 FX space (along with the oil exposed NOK and Brexit battered GBP). Even the slightly upbeat Bank of Canada statement didn’t help much. The focus next week turns to the OPEC+ meeting and the group response to the recent sell-off in the oil market. Concerns over demand trends could keep oil soft into the OPEC+ meeting on Thursday (suggesting a modest upside to USD/CAD earlier in the week), where pressure for renewed supply cuts is building. Still, the 50-day moving average resistance level of USD/CAD 1.3314 should hold,” says Chris Turner, global head of markets and regional head of research at ING. “With EUR/USD likely to remain range-bound (and hence giving limited support to GBP/USD), expect GBP/USD to head towards 1.2500 next week (and EUR/GBP to 0.9500). We look for the break in the 200-day moving average support level of GBP/USD 1.2740 next week.”

However, expectations range widely for GBP/USD in the event that a ‘no deal’ Brexit comes to be viewed by the market as a certainty, although both 1.20 and 1.15 have recently been tipped. GBP/USD price action has a considerable influence on GBP/CAD and at levels of 1.20 and 1.15, GBP/CAD would be found trading at 1.61 and 1.52 respectively if USD/CAD rose to 1.3225, although Sterling’s losses would ease with gains in USD/CAD.

“We expect continued weakness in the USD, while the CAD should be supported by the recovery of the Canadian economy. USD-CAD should therefore tend downwards in the coming months,” You-Na Park-Heger, an analyst at Commerzbank, who looks for USD/CAD to end the year at 1.30 and GBP/CAD to close at 1.7425. "It is clear that interest rates in Canada will not rise in the foreseeable future. But a normalization could at least be initiated earlier than in the USA, which is why we see support for the CAD against the USD in the coming months." 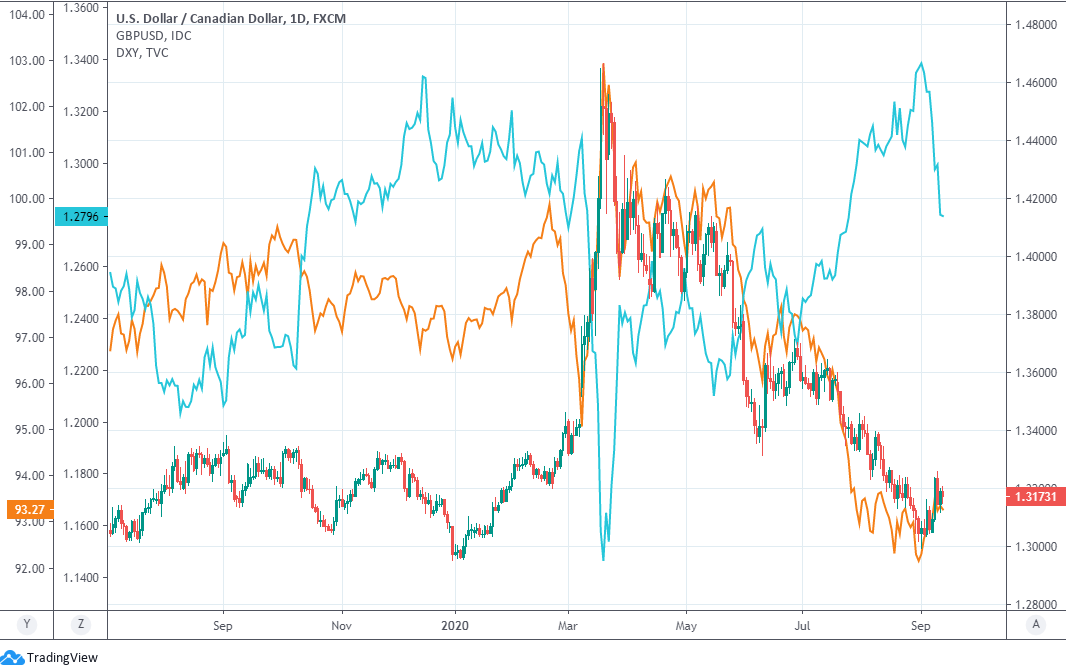 Brexit risks will dominate the agenda for Sterling this week, with Thursday’s Bank of England (BoE) monetary policy decision playing second fiddle on this occasion, while for the Canadian Dollar the Organization of Petroleum Exporting Countries (OPEC) meeting could matter more than any of the economic data releases that are in the calendar.

“Some of the hardest hit sectors — airlines, large convention centres, crowded arenas, restaurants serving office workers — haven’t yet rebounded, and simply don’t have as far to fall at this point. So we’ve allowed for a considerable moderation in growth in Q4 and Q1. But we’re not expecting another negative quarter in Canada or the US at this point, although we would feel more assured of that for the US if Congress extended support for the unemployed and state/local governments,” says Avery Shenfeld, chief economist at CIBC Capital Markets, who’s concerned about a possible second wave of coronavirus infections. “The most important toll, measured in lives lost rather than dollars, should also not be as severe. We’ve improved treatments somewhat, and learned that those most vulnerable (the elderly in nursing homes, those with underlying conditions like hypertension and obesity) need to be particularly careful and better protected. So far, the data suggests that this wave is less centred on such people, and we hope that we can keep it that way.”

August inflation figures are out in Canada on Wednesday at 13:30 and when taken together with Friday’s 13:30 release of July retail sales numbers, forms the highlight of the week for Canadian economic data. Consensus estimates were not available at the time of publication.

“We expect a unanimous vote to keep the Bank Rate unchanged, but think some dovish members are likely to dissent on QE by voting for more (most likely M Saunders and J Haskel). Hence, we pencil in a 7-2 vote split,” says Fabrice Montagne, chief UK economist at Barclays. ““While we still expect a UK-EU deal to be reached, we think a no-deal scenario would not be meaningfully more detrimental than a (minimalistic) FTA Brexit as we believe that emergency national legislation would, just like in 2019, aim at avoiding major disruptions...July GDP grew 6.6% m/m, having recovered half the output lost due to the virus, leaving GDP 11.7% lower than in February 2020. However, there are reasons for caution, namely the end of targeted government support, a second wave of the virus gathering pace, general caution in returning to the workplace and the recovery now relying on a small number of smaller sectors generating high growth rates. We keep our GDP forecasts unchanged and expect 3.5% m/m in August and 1% m/m in September. 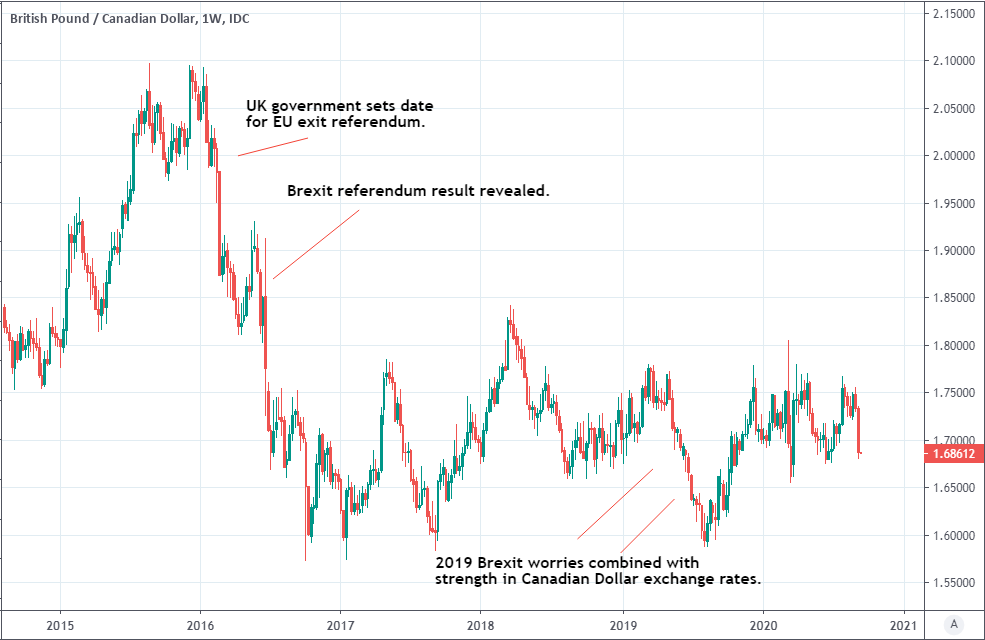