- GBP/CAD left within inches of August highs after Friday rally.
- Could see late July highs if CAD remains a major FX laggard.
- Risk for GBP is of more range-trading if CAD plays catch-up.

The Pound-to-Canadian Dollar rate has been lifted toward the top of its August range and could attempt to retest late July highs over the coming days if the Loonie remains as soft as it was on Friday, although the risk is of a Canadian comeback that results in more range-trading for Sterling.

Canada's Dollar was lower against all major currencies other than the U.S. Dollar and Yen on Friday while Sterling was higher against most counterparts in a turn of events that led the Pound-to-Canadian Dollar rate to rise 0.83% to 1.7459. That left GBP/CAD with a 1.37% gain for the week.

The Loonie's underperformance built following June GDP data that was stronger than consensus had anticipated, with the economy having expanded 6.5% in the final month of the second-quarter, while Statistics Canada preliminarily estimated that July GDP growth was 3%.

Friday's data otherwise confirmed a historic quarterly decline of -11.5% that rises to -38.7% when expressed as an annualised percentage, while the June GDP number wasn't as good as the UK's 8.7% and Stat Can's anticipated 3% increase for July implies a prompt slowdown for Canada's economy.

"The CAD has had a constructive week against the USD, even if its overall performance remains a little underwhelming within the G10 complex," says Shaun Osborne, chief FX strategist at Scotiabank. "The CAD’s rise has been sufficient to bring a test of the 1.30 zone into clearer view. Investor focus on the Fed outlook, after Chairman Powell outlined changes to the way the Fed will formulate policy moving forward (allowing inflation to run a little “hot” in essence), maintains attention on the USD’s diminished real yield appeal (and the CAD’s relative advantage on this front at the moment)." 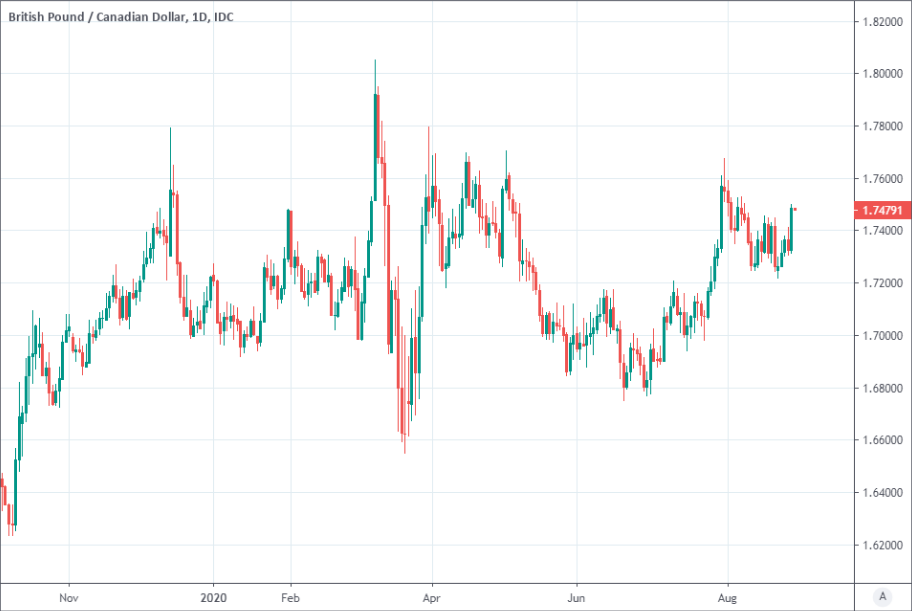 Scotiabank looks for USD/CAD to continue falling, eventually hitting 1.2950 as the U.S. Dollar weakens and the Loonie strengthens, which implies more range-trading between the 1.7250 low and highs just above 1.7450 for GBP/CAD given that Sterling is also expected to rise in the week ahead.

However, others envisage a period of procrastination for the Loonie that could see USD/CAD consolidating in an almost sideways range while the Pound-to-Canadian Dollar resumes toward late July highs around 1.77.

"The market has broken below its recent range lows at 1.3135/33, which suggests the downtrend is resuming for a move back to the 61.8% retracement of the entire 2017/2020 upmove at 1.3057. We expect to see a lengthier pause here, particularly with another key support just below at the 1.2952 price low," says David Sneddon, head of technical analysis at Credit Suisse. "Should a lengthier pause indeed be seen and particularly a rebound, a subsequent breakdown below these levels would then complete a particularly compelling long term top, in line with other USD pairs."

The Pound-to-Canadian Dollar rate would rise above 1.76 if USD/CAD oscillated around 1.3050 this week while Sterling continued higher, as analysts anticipate that it will, although this might simply serve to draw the interest of short-sellers. GBP/CAD is a good candidate for short-selling according to CIBC Capital Markets strategists, who forecast a year-end finish of 1.69 but have been waiting for better levels from which they bet against the exchange rate. 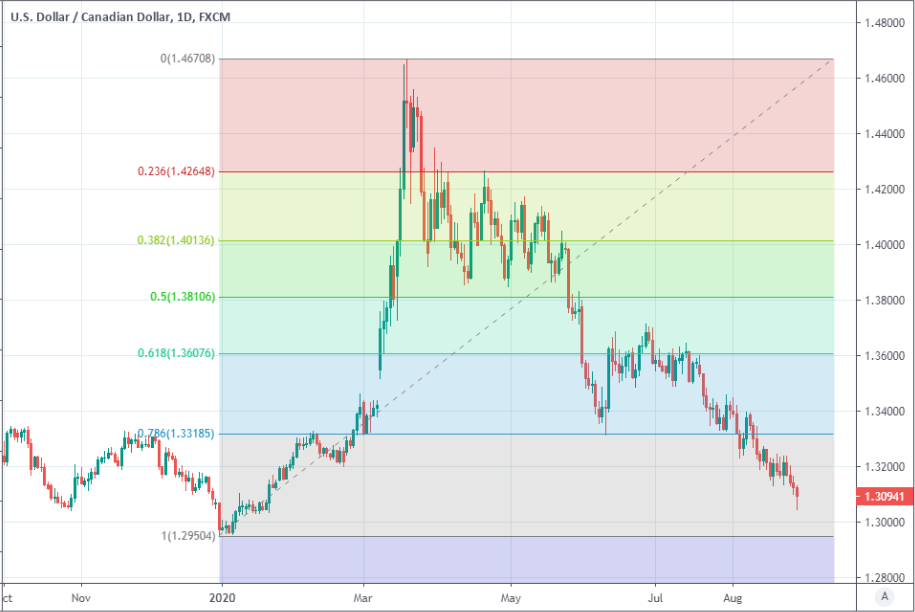 Above: USD/CAD rate shown at daily intervals with Fibonacci retracements of 2020 rally.

"UK data has outperformed and has driven the economic surprise index higher since July. Of course, this is the result of low market expectations rather than real outperformance, as the UK has lagged most G10 counterparts during the pandemic," says Bipan Rai, CIBC's North American head of FX strategy. "Weakness in domestic fundamentals will be made worse by Brexit risks, especially as we approach the end of the transition period."

Sterling will take cues from the ebb and flow of risk appetite among investors this week, sentiments toward the U.S. Dollar and other international factors given the calendar is again devoid of major economic numbers from the UK.

Likewise for the Loonie too, although at 13:30 on Friday the Canadian currency will play close attention to August's jobs data. Canada has enjoyed a strong jobs recovery so far following the government mandated closures of the economy back in March and the market will be looking to see if this continues.

"The loonie continues to benefit from a weakening in the USD and the resilience in oil prices, and may continue to show robustness as we head to the end of next week when Canadian jobs numbers will be released alongside the US ones," says Francesco Pesole, a strategist at ING. "A confirmation that Canada is following the US rebound in employment should be enough to let CAD appreciate further without much resistance, especially if US NFP disappoint."

Pesole says USD/CAD could fall below 1.3000 this week, which would imply a range-bound GBP/CAD, and that the Loonie has scope to outperform even the Australian and New Zealand Dollars due to a "a lingering net-short speculative positioning" that might be spooked into capitulation by a strong jobs report. 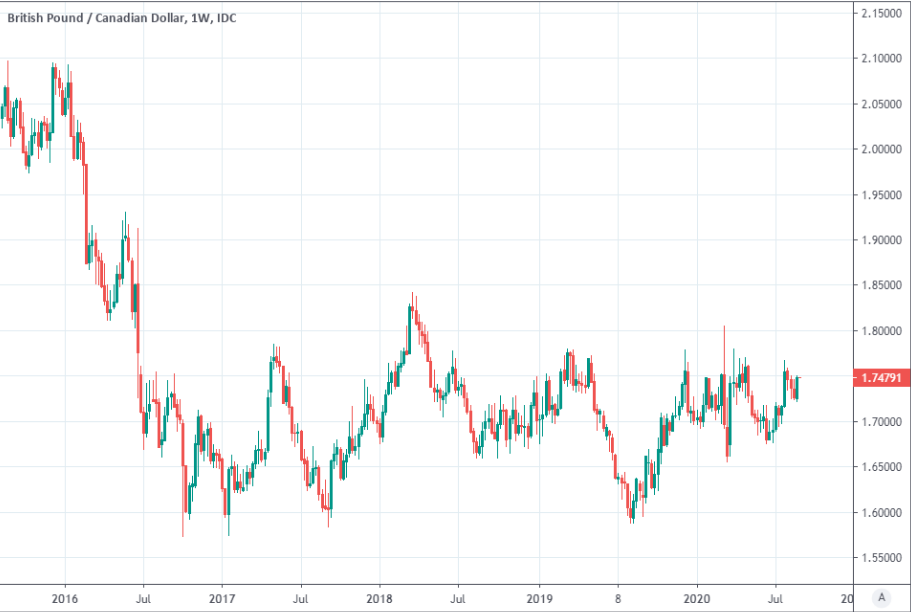