The Pound-to-Dollar rate has broken higher from a narrow August range and is now targeting December's election rally highs amid an unravelling of the U.S. greenback, although lingering Brexit uncertainties, U.S. economic resilience and the oversold nautre of the Dollar could slow Sterling's ascent.

The policy shift was in line with what many analysts were expecting but implies further falls in the 'real' bond yields, or inflation-adjusted returns earned by investors, that were widely cited as being behind declines in the Dollar over recent months as well as late last week. Investors' extreme bearishness on the Dollar, combined with Sterling's earlier underperformance, have left the Pound-to-Dollar rate in an idea position to rally.

EUR/USD and AUD/USD have already risen back to levels last seen in early 2018, while USD/JPY has hit 2017 lows and USD/CHF has found its way into a five-year trough, but the Pound-to-Dollar rate has barely made it back above March 2020 highs. This might mean for some investors at least, the Pound-to-Dollar rate is now an ideal vehicle for expressing bearish U.S. Dollar sentiments.

"We remain bullish on the GBP outlook from a technical point of view and look for gains to extend towards 1.35 on a break above 1.3265," says Juan Manuel Herrera, a strategist at Scotiabank.

Sterling rose above two notable technical resistance levels in early morning trade Friday before advancing as far as 1.3358, its highest level since December 2019, in the noon session although there's now little standing in the way Sterling and its December 2019 peak of 1.3519. 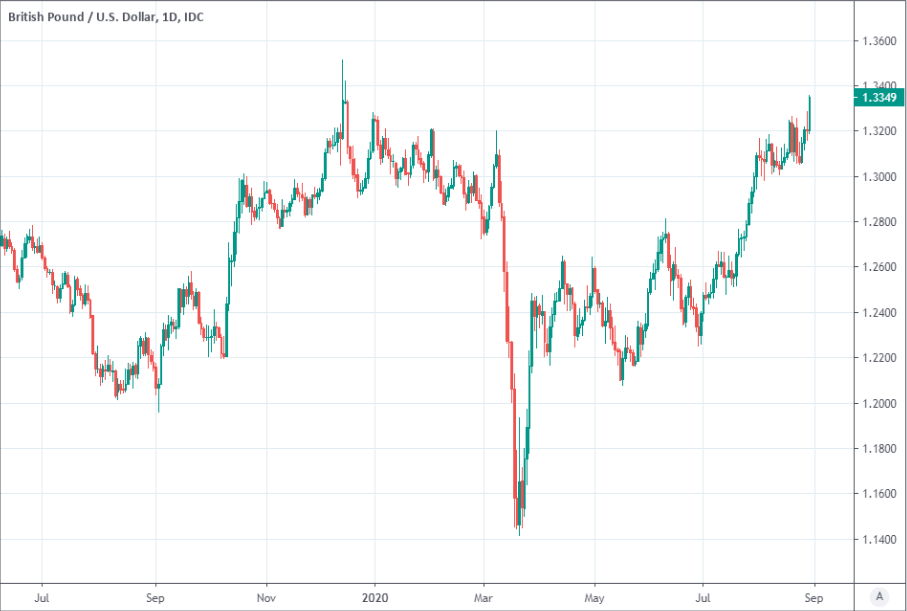 "Above here there is a vacuum of meaningful resistances, suggesting a range breakout could lead to a quick move up to 1.3514, the high of 2019, with minor levels on the way seen at 1.3338, then 1.3422," says David Sneddon, head of technical analysis research at Credit Suisse.

Once past 1.3519 the Pound would be trading at its highest since early 2018, although if Credit Agricole CIB is right about how month-end reblancing flows among stock market investors are likely to impact exchange rates then Sterling might have another opportunity to achive those levels this week.

"The moves in equity markets, when adjusted for market capitalisation and FX performance this month, suggests month-end portfolio-rebalancing flows are likely to be USD selling across the board, with the strongest sell signal in the case of the USD vs the GBP," says Manuel Oliveri, a strategist at Credit Agricole CIB. "We look at the change in equity performance by market capitalisation for all G10 currencies, and we adjust this for monthly FX spot moves. This provides an indication of how the value of assets has changed over the course of the month and thus the extent of portfolio rebalancing flows that will likely take place at the end of the month."

Sterling would be trading around 1.40 or above against the Dollar if it had kept pace with the Euro, Aussie and other currencies in the 2020 advance on the U.S. currency. The Pound fell sharply against all major currencies back in May and has lagged many rivals in the months since, with concerns about the economy, Bank of England (BoE) monetary policy and the trajectory of the Brexit trade talks each taking their turn to hamper the British currency.

Brexit negotiations remain deadlocked although The Express reported on Friday that Brussels' Michel Barnier has told European capitals they may need to revise the negotiating mandate given to him in order to make progress in the talks, indicating potential movement on the European side.

Trade talks won't resume in earnest until the second week of September although the absence of progress toward an agreement is a headwind and vulnerability for Sterlling. 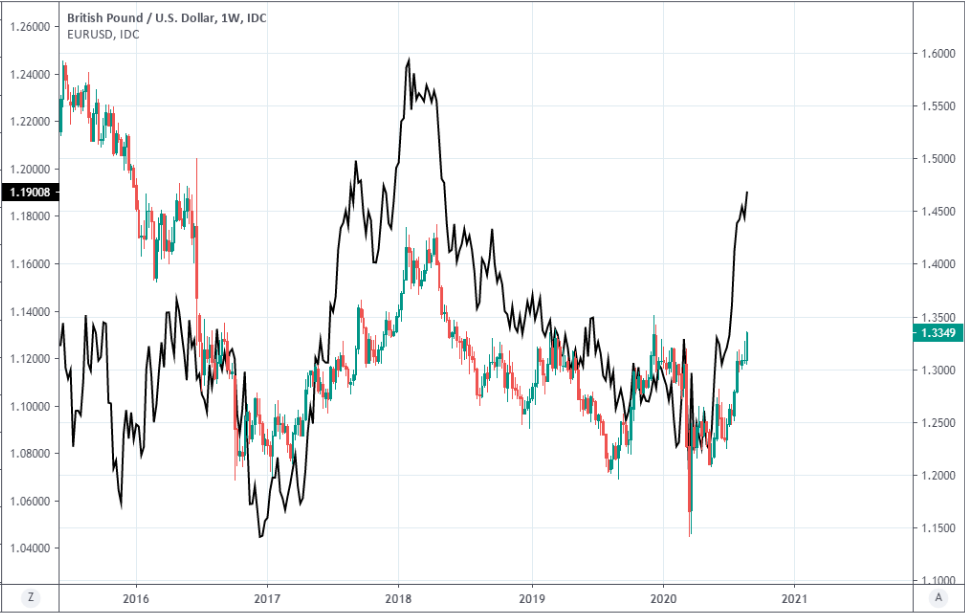 Meanwhile, the calendar is again devoid of market moving data for Sterling, which leaves investor attention on the handful of key economic releases that are due out from the U.S. in the coming days. The highlight of the week is the non-farm payrolls report at 13:30 on Friday although before then the Institute for Supply Management (ISM) manufacturing PMI is out on Tuesday at 15:00 and the non-manufacturing (services) is out Thursday at 15:00.

"The regional surveys for August are mixed, with the Chicago PMI, the Philly Fed and the Empire State indexes falling, while the Richmond and Kansas City Fed indexes rose; the Dallas Fed and Milwaukee PMIs have not yet been released," says Ian Shepherdson, chief economist at Pantheon Macroeconomics in a Friday note. "Our take on the numbers so far overall is that they point to a modest dip in the national ISM manufacturing index, which will be reported Tuesday. Manufacturing is still recovering, but the pace of the upswing appears to have peaked, at least for now."

Consensus is looking for the manufacturing index to edge higher from 54.2 to 54.5 while markets see the services index falling from 58.1 to 57.5. The payrolls report is expected to reveal a 1.5 million increase in new jobs that pushes the unemployment rate down from 10.2% to 9.8%.

But it's not clear what impact these kinds of numbers will have on the Dollar given the Fed's policy shift and market reaction to it.

"The new policy framework is intended to help keep real yields low well into the economic recovery by dampening expectations for rate hikes until the labour market has tightened significantly, and by encouraging higher inflation expectations through displaying a greater tolerance to allow an overshoot in the future," says Lee Hardman, a currency analyst at MUFG. "The more successful the Fed is at lifting inflation without tightening policy, the worse the outcome ultimately will be for the USD. Recent history since the Global Financial Crisis shows though that lifting inflation will be much more difficult in reality."

Stronger economic data and a strengthening recovery should amount to firmer inflation pressures further down the line. But with the Fed declaring its intention to keep rates low for an extended period and allow inflation to rise above target for a time, stronger data implies lower 'real yields' at least for a period so it's not obvious the Dollar would benefit from positive data this week. 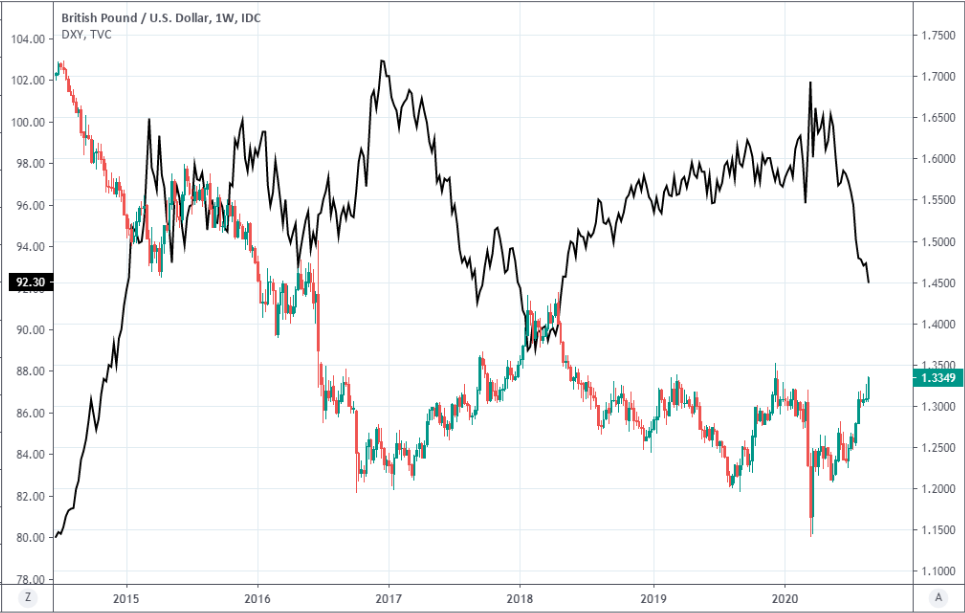