The Pound-to-Canadian Dollar rate was close to having unwound all of its August gain on Wednesday as the Loonie retook previously lost ground from the greenback while Sterling and the Japanese Yen underperformed amid another possible attempt by the market to push the Turkish into an abyss.

Sterling was couldn't quite reach the bottom of the major currency bucket as it was pipped to the post by the larger and heavily sold Yen which.

The Japanese currency Sterling's only counterpart to have clocked declines against the greenback, explaining the Wednesday's losses for the Dollar Index.

Otherwise broad weakness in the greenback enabled the USD/CAD rate to hold below 1.33 after breaking the landmark level earlier in the session, which put more pressure on the Pound-to-Canadian Dollar rate.

The Pound-to-Canadian Dollar rate always tends to reflect relative price action in GBP/USD and USD/CAD but the former had declined -0.67% for the week while the latter was also down but by a lesser -0.41%, with the two totting up to a -0.87% five-trading-day loss that took GBP/CAD back below the 1.73 handle.

"The GBP has slipped back from resistance around 1.77— where the cross has struggled in the past few weeks—but the drop looks more like a pause in the broader uptrend than a reversal. The underlying trend here remains GBPconstructive, with the June/July bull channel under no particular threat and broader trend signals aligned bullishly for the GBP," says Juan Manuel Herrera, a strategist at Scotiabank, in a Tuesday research note. "Support is 1.7350." 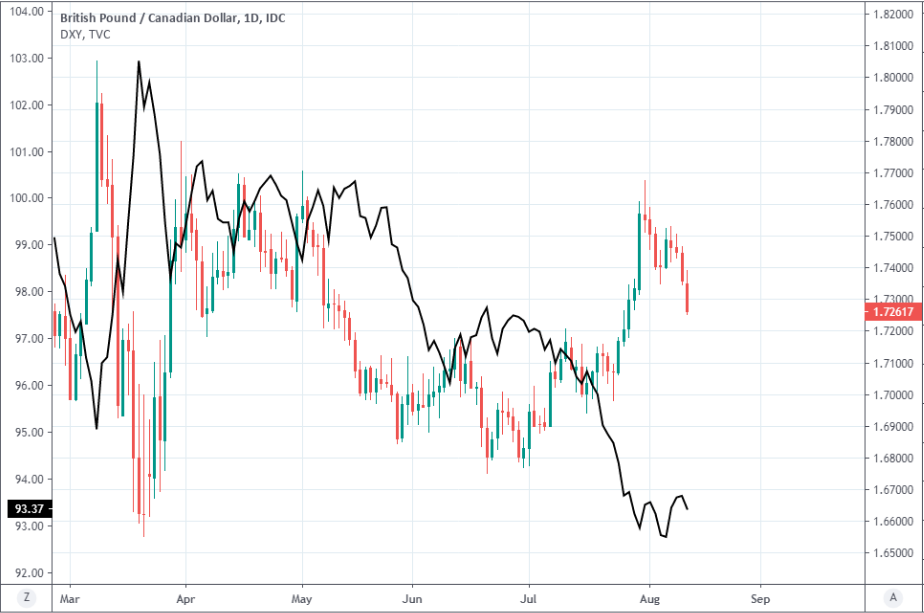 Wednesday's GBP/CAD losses brought Sterling to its lowest levels since late July, which was also when a range breakout in GBP/USD came alongside falls in USD/CAD and the Dollar Index with which the Loonie has been closely correlated of late. The latter moves lifted GBP/CAD from below 1.72 to near 1.77 in little more than a week.

There are many competing theories that attempt to to explain GBP/USD gains in August, a month that is typically inhospitable to risk currencies like the Brexit-blighted and coronavirus-plagued Sterling. GBP/USD gains were an important driver of the GBP/CAD rally.

One of the very few things that can be said for certain in relation to this price action is that it came alongside an explosive Euro-to-Dollar rate break to the upside as well as resulting meachnical and correlation-related declines for the Dollar Index and USD/CAD.

"Spot USDCAD (1.3292) is now trading even further below fair value (1.3412) than it was on August 4 (today the gap is about 120 pips). The DXY remains the model's highest-weighted factor, with risk appetite variables like the S&P 500 and ADXY coming in second and third respectively," says Greg Anderson, CFA global head of FX strategy at BMO Capital Markets.

USD/CAD has shadowed the Dollar Index since early July though it's not quite kept pace with the greenback's losses thus far in August. 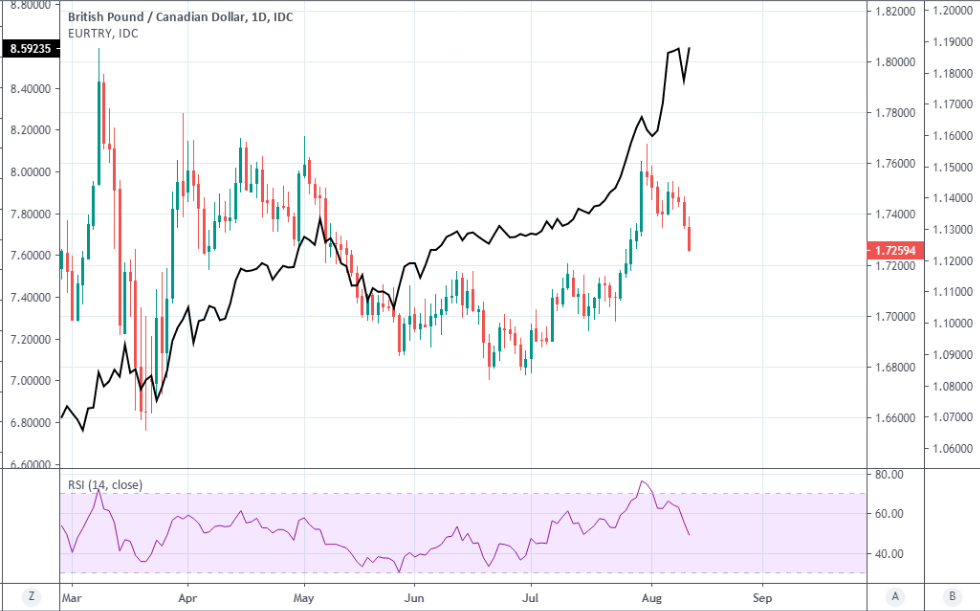 Dollar Index losses have escalated alongside the above-referenced explosive gains for the Euro given the latter accounts for something like 57% of flows measured by the ICE barometer of the U.S. currency. This large weighting trades Dollar Index losses for EUR/USD gains in most instances.

August's EUR/USD rise from 1.16 to 1.19 might have seemed a bridge too far for many investors if not accompanied by an EU coronavirus recvery fund that's perceived as a gamechanger for the economic outlook, not to mention the sudden, simultaneous aversion to both the Dollar and Lira.

EUR/USD gains are a prerequisite for Turkish Lira depreciation in a world where investors will happily swap U.S. Dollars for just about any emerging market currency, which seemed to be the case through much of July when even USD/TRY held steady as other high risk emerging market counterparts like the Rand recovered off earlier lows.

But the longer that Europe's single currency is stymied by the 1.19 level, the more that momentum will shift toward the greenback and the Turkish Lira. The risk of EUR/USD capitulation to downside will grow with the duration of its containment at 1.19. 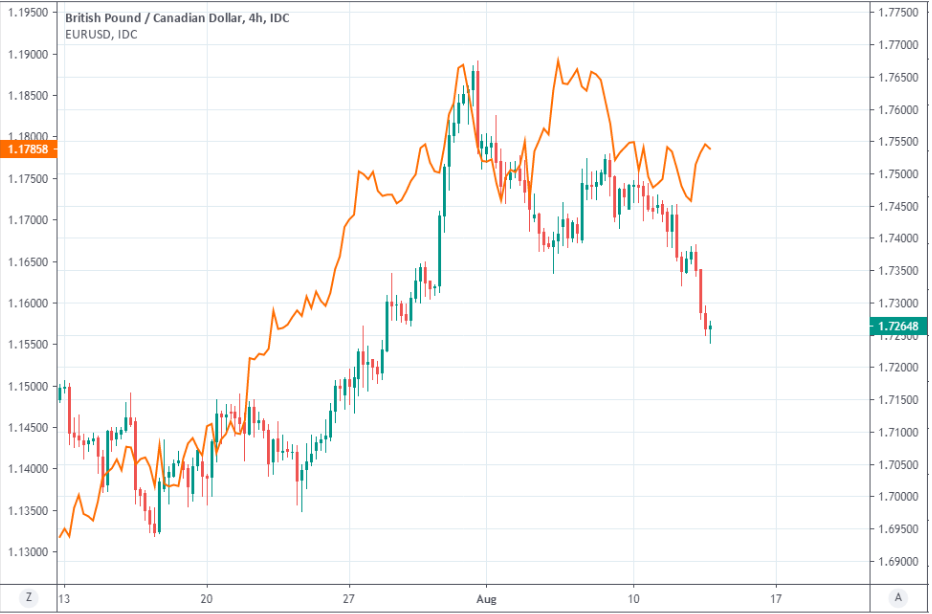 Given the aforementioned correlations and resulting economic implications, this could all mean the Dollar Index will continue to drag USD/CAD and GBP/CAD lower until either the besieged Turkish currency crumbles or the bullish Euro-to-Dollar rate consensus capitulates.

Outflows from the Dollar and resulting gains for EUR/USD, combined with a reorientation of depreciation pressures from sales of USD/TRY to bets in favour of EUR/USD, could have led EU recovery fund revellers to unwittingly facilitate a continued run on the Turkish currency through a ramp-up of EUR/TRY.

EUR/TRY is effectively an amalgamation of EUR/USD and USD/TRY but simultaneous increases in the latter two are not necessary to engineer an inflationary and increasingly debilitating increase in EUR/TRY.

Strong EUR/USD gains combined with modest falls in USD/TRY are enough to lift EUR/TRY. The rub for GBP/CAD in circumstances that stil somehow include a rising USD/JPY is that GBP/USD must fall to generate the trade-weigheted depreciation that many might perceive as necessary.

"The Corona crisis has hit the British economy comparatively hard. In addition, Brexit risks remain high, which is why we assume that the pound will continue to remain weak against the euro. By contrast, we have raised our GBP-USD forecast as we expect a continued USD depreciation," says Thu Lan Nguyen, an analyst at Commerzbank, indicating a bullish set of EUR/USD forecasts.