The Pound-to-Canadian Dollar exchange rate entered the new week on the front foot Monday but will be tested over the coming days and could struggle to hold its newly recovered ground as the week draws on.

Pound Sterling held the advantage over the Loonie and was digging in its heels in an attempt to win back further ground from its Canadian rival, after having interrupted a more-than two month run of losses for a second consecutive time last week when it closed 0.53% higher for the period.

But appetite for both Sterling and the Loonie will be tested multiple times in the coming days, which could mean volatility and some upside potential for the British currency if Canada's April GDP data proves a gamechanger for the ugly contest that is the Pound-to-Canadian Dollar rate.

"The size of the contraction will be key for markets in assessing the effectiveness of the policy response in driving the economy back to pre-virus levels. We fear that at the current 1.36 level, FX markets may not be braced for the worst case scenario and a reading of April’s GDP near the lower-end of the BoC’s projection could send USDCAD back towards our forecasted rate," says Ranko Berich, head of market analysis at Monex Europe, who looks for a USD/CAD rate of 1.38 by the end of June.

April's Canadian GDP data that will be released at 13:30 on Tuesday and is an upside risk for the Pound-to-Canadian Dollar rate given that markets are looking for the economy to have shrank by -10.5% from March levels which despite being the largest monthly contraction on record, pales into insignificance when contrasted with the -20.4% fall seen in the UK during April. The UK data imply a larger-than-expected fall for Canada on Tuesday. 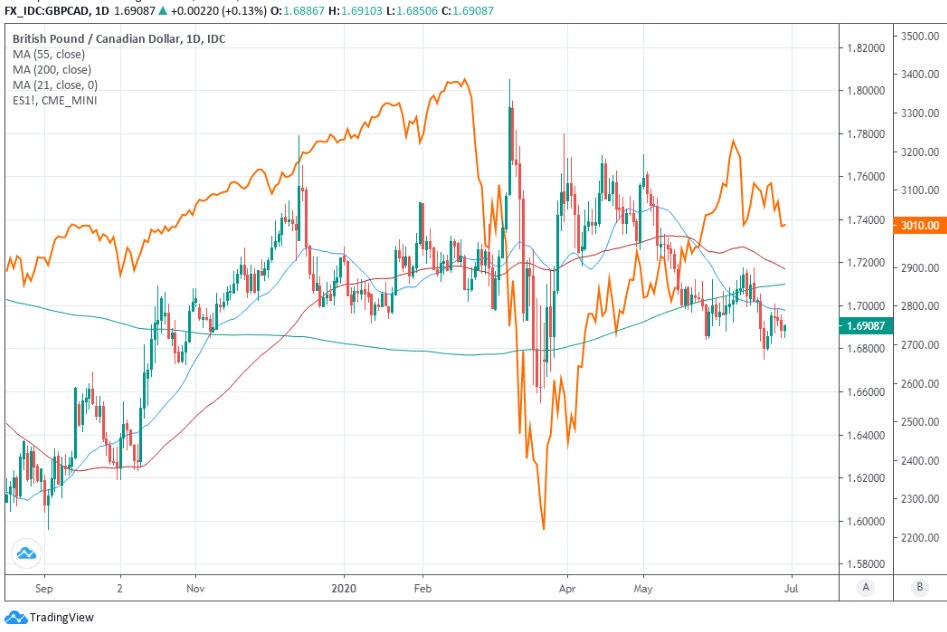 The UK economy shrank in April at a near twofold pace of the decline the market now anticipates for Canada's economy in April, despite having been hit to a lesser extent than Canada during March when the UK saw GDP fall -5.8% and Canada suffered a decline of some -7.2%. Canada's economy was quicker to become restricted in March but never quite reached the same level of curtailment in April, according to the Goldman Sachs Effective Lockdown Index.

The index attempts to quantify the degree to which economies were restricted in 'lockdown' by assigning values on a 1-to-100 scale, with those at the higher end indicating tighter restrictions. It saw both contracting between -5% and -7.5% in March, though with Canada sustaining the slightly heavier blow, while the  level of the indices changed little in April. Canada's score fel to 55.7 by month-end from to 57.4 at the end of March, while the UK score had declined from 73.8 to 72.6. Anticipated GDP declines were again broadly similar, though with the tables having turned so the UKwas indicated at around -20% while Canadian GDP still is seen between -15% and -17.5%.

"We continue to look for 2020 full-year average GDP growth of -7.5% and quarterly annualized growth of -42%/+28%/+13% in Q2/Q3/Q4," says Daan Struyven, an economist at Goldman Sachs in a review of the May jobs report. "We continue to believe that a comprehensive reassessment of the BoC policy response is likely at the July 15 meeting as the focus under the new Governor Macklem shifts from market functioning to supporting aggregate demand." 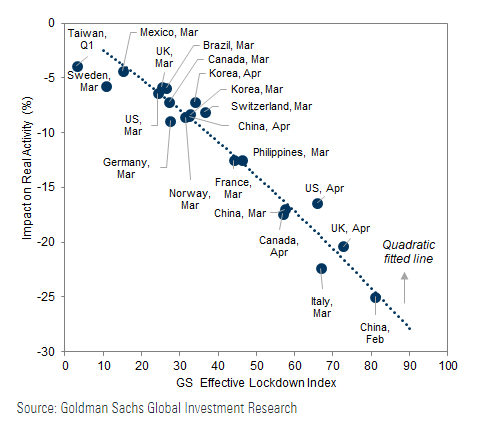 The Canadian Dollar might not be priced for the above kinds of larger-than-expected falls on Tuesday, which means the data could lift the Pound-to-Canadian Dollar rate, and in part because Statistics Canada said on May 29 that "preliminary information indicates an 11% decline in real GDP in April." The Bank of Canada (BoC) also said this month the second-quarter fall could be between 10% and 20% rather than the 20%-to-30% decline highlighted in its worst case scenario.

"Households, having not seen any retrenchment post-GFC, have seen debt measured as a percentage of household income rise to 175% - the largest in the G10...This level of debt will throw a great deal of uncertainty over how vigorous an economic recovery Canada can achieve going forward," says Lee Hardman, a currency analyst at MUFG, who looks for the Loonie to underperform major rivals. "Short-term we see scope for the USD to correct stronger which would likely see renewed CAD weakness. But further ahead when we expect USD to weaken, we still see reason to forecast CAD strength versus USD as lagging other G10 currencies."

A GDP shocker on Tuesday might to lift GBP/CAD, more so if it leads the correlation between the Pound-to-Canadian Dollar rate and S&P 500 futures to remain negative, given that it's underperformed many counterparts amid the second wave of coronavirus in the U.S.That would enable the Pound to fall alongside stock markets if they take fright at thesecond coronavirus wave in the U.S., but for the up move to be more than a flash in the pan the Loonie would have to beat Sterling in a continous ugly pageant. 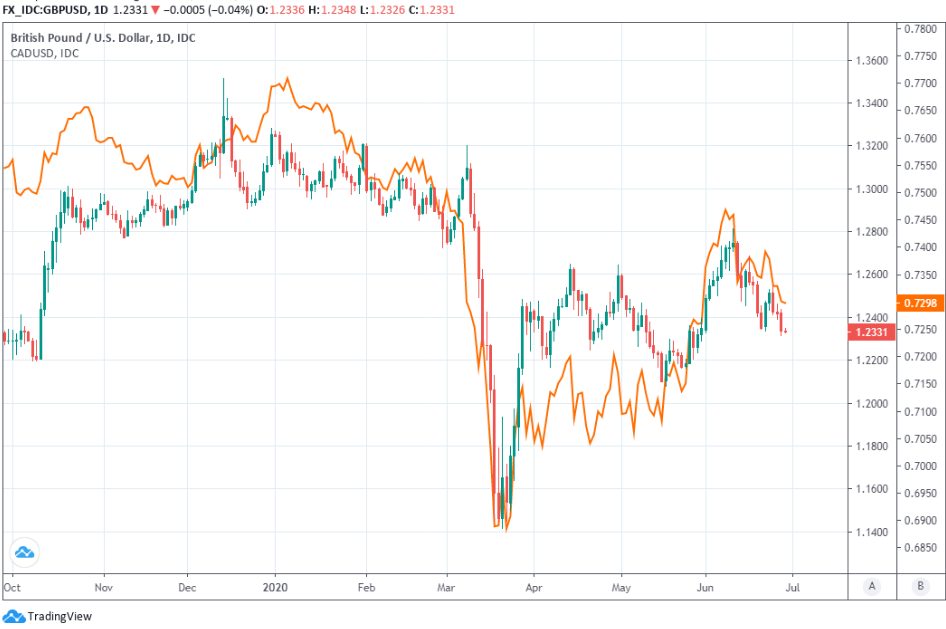 Beating Sterling in an ugly pageant might become a tall order again if investors take badly to any UK government decision to retighten the 'lockdown' of Leicester City. Then there's the 'accelerated' Brexit negotiations that began at the weekend under the auspices of new negotiator David Frost, who's rejection of the EU's demand for a 'level playing field" and a status quo settlement on fishing opportunities has driven the talks into fresh deadlock.

Frost was awarded a promotion at the weekend and will become National Security Adviser alongside Europe Adviser, replacing Mark Sedwill, who was also Cabinet Secretary and Head of the Civil Service. Sedwill was seen in Brexit circles as an ally of people unpopular within them, so to the extent that Frost's appointment is a symbolic statement of intent, it could indicate more deadlock and sightings of another Brexit cliff edge around the corner.

Sterling had been heartened in the last fortnight by Prime Minister Boris Johsnon's call with the EU's Ursula Von der Leyen, which produced statements of ambition and a commitment to "accelerated" talks that the market bought as a sign that compromise could be near.

This week's talks continue through July and are tipped to weigh on GBP/USD in the days and weeks ahead, which puts the onus on USD/CAD to avert a decline in the Pound-to-Canadian Dollar rate given the latter is an amalgamation of the two aforementioned exchange rates. A bad GDP number that leads CAD/USD to overtake GBP/USD in a southbound race would lift GBP/CAD into mid-week, while the up move would be even larger if GBP/USD and USD/CAD rose simultaneously. But the trajectory of the Brexit talks could ensure that any GBP/CAD rally comes with a sell-by date. 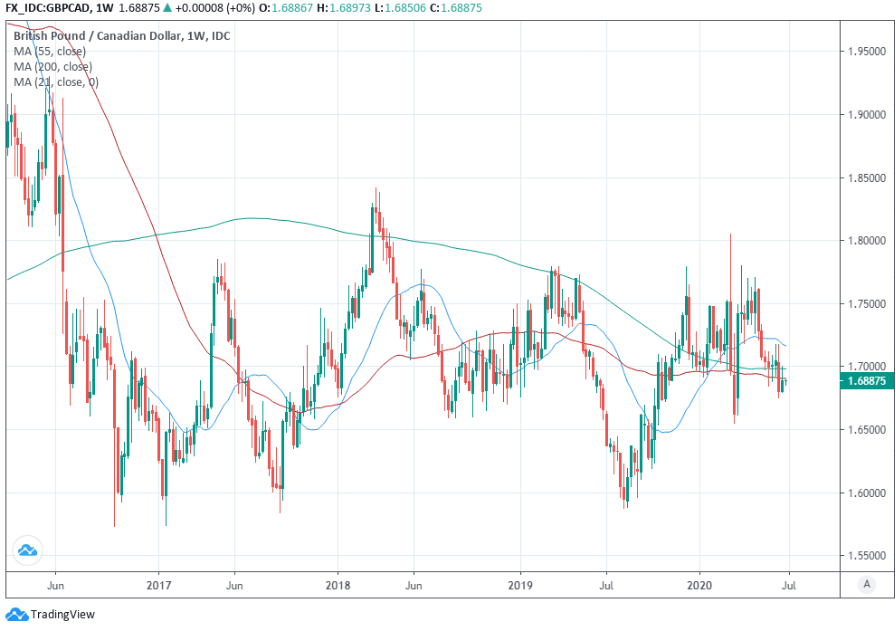