- GBP/CAD takes out cluster of supports, breaks into lower range.
- May struggle to get above 1.6974, risks falling as far as 1.6610.
- As GBP underperforms, CAD proves resilient to USD rebound.

The Pound-to-Canadian Dollar rate furthered a two-month breakdown into a new, lower range last week as the Loonie proved more resilient to a rebound by the greenback and Sterling undeperformed, although March crisis period lows could beckon the British currency over the coming days.

Pound Sterling had attempted to make headway early last week but was beaten into retreat by a Canadian Dollar that proved more resilient to the overtures of a steadying greenback, leading the Pound-to-Canadian Dollar rate down through a crowded cluster of important technical support levels.

The Pound-to-Canadian Dollar rate rode roughshod over its 55 and 200-day moving averages as well as its 55 and 200-week averages in a landmark week for the two-month breakdown in the exchange rate.

Those were all significant support levels that could now resist any corrective moves higher, with the effect of curtailing Sterling's upside potential while extending its scope for further losses over the coming days.

However, if bearish expectations for a GBP/USD slide toward 1.21 are borne out in price action over the coming days and weeks, the Pound-to-Canadian Dollar rate will face substantial falls without offsetting gains in USD/CAD.

GBP/CAD is effectively an amalgamation of GBP/USD and USD/CAD, and the latter has proven resilient to the overtures of the greenback of late, enabling the Loonie to outperform Sterling.

The Pound-to-Canadian Dollar rate is likely to trade in a 1.6610-to-1.6974 range this week and at the bottom end, would be close to the 2020 lows set during the March liquidity crisis. 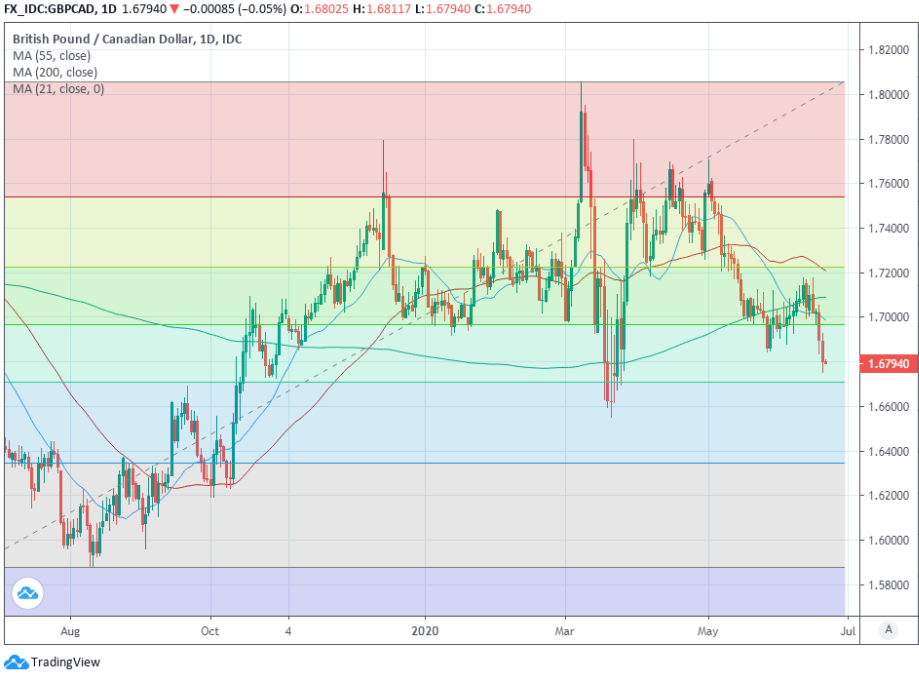 "Our weekahead model suggests stability for USDCAD around a 1.3395/1.3765 range. We think the USDCAD is more likely to test the lower end of that ban," says Shaun Osborne, chief FX strategist at Scotiabank. "The USD is running into good resistance, defined by the 21-day MA (1.3613 currently) and should also expect firm resistance on gains towards 1.38 (40-day MA at 1.3802). The underlying trend lower off the late March high remains intact but trend signals have moderated over the past week, which may make it hard for the market to make progress – in any direction. Support is 1.3500/10 and we think a break below here should target a retest of the low 1.33s."

The Pound-to-Canadian Dollar rate enters the new week trading at 1.68 but could struggle to recover by much over the coming days if Scotiabank is right about USD/CAD testing below 1.35 while being capped at 1.38. Especially if GBP/USD also remains under pressure, as it's been tipped to.

The Pound-to-Canadian Dollar rate would fall to 1.6698 if USD/CAD rose back to 1.38 and GBP/USD fell back to 1.21 at the same time, and even lower if GBP/USD and USD/CAD fell simultaneously.

"The GBP has failed to derive any relief from the improvement in the Brexit negotiation mood music and from the reduced likelihood of the BoE implementing negative rates anytime soon if at all. The market clearly wants to continue to sell the GBP at this point in time even as fundamental downside risks have eased. Speculative short GBP positions have been building in recent weeks. We favour short GBP exposure against the USD as we continue to see scope for the USD to rebound further against European currencies from heavily oversold levels," says Lee Hardman, a currency analyst at MUFG. who's targeting a fall to 1.21 in the coming weeks.

Even in an arguably optimistic scenario that saw GBP/USD somehow limit its decline to 1.23 from 1.2350, the Pound-to-Canadian Dollar rate would recover only as far as 1.6974 in a market where USD/CAD has risen from 1.36 to 1.38.

That would leave Sterling comfortably below last week's starting point and facing resistance from prior support levels, while each incrementally poorer performance from GBP/USD would weigh that bit heavier on GBP/CAD. 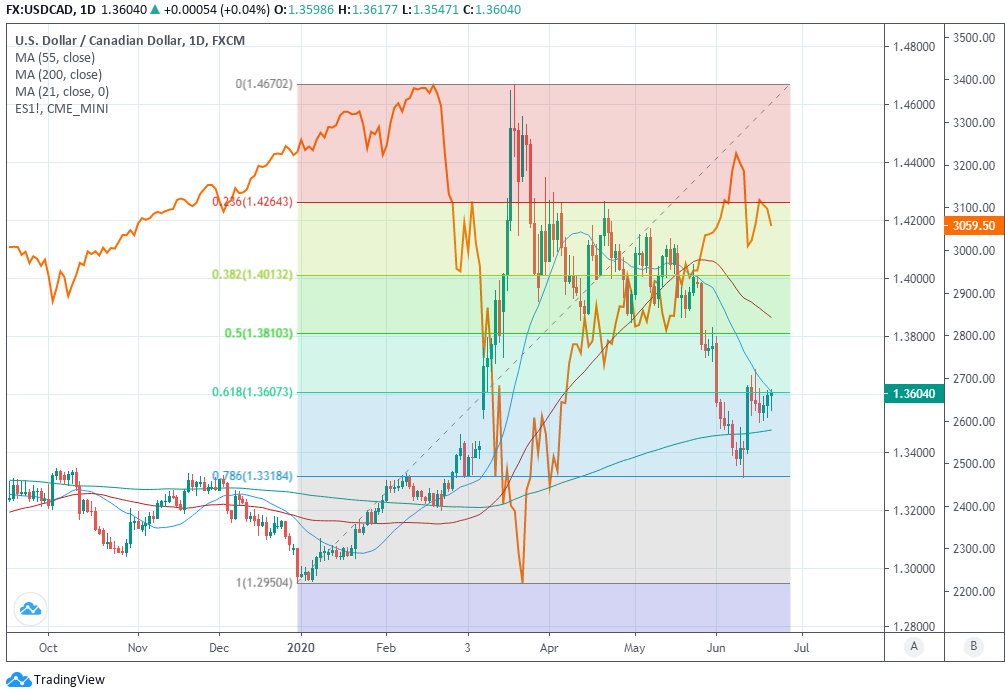 Meanwhile, if the USD/CAD rate fell to 1.3394 and the bottom of the range envisaged by Scotiabank, GBP/USD would need to rise from 1.2350 to 1.2550 simply just to prevent the Pound-to-Canadian Dollar rate from falling. But Scotiabank itself sees GBP/USD encountering resistance at 1.24 in any recovery, which implies a Pound-to-Canadian Dollar rate of 1.6610 in any market where USD/CAD is at 1.3395.

"We have a strong suspicion that Macklem will aim to insure a smooth transition and will keep any changes for the autumn. We do not expect a significant impact on CAD, which may however be highly sensitive to any comments around negative rates," says Francesco Pesole, a strategist at ING. "The loonie still shows a more attractive risk-reward profile than other commodity currencies in the G10 thanks to the recent improvement in fundamentals (we do not see the April retail sales drop as too worrying) and the prospects for oil prices. Oil now appears to have a fairly solid floor thanks to improved compliance with OPEC+ cuts, which bodes well for a recovery in the battered Canadian energy sector, ultimately aiding the Canadian dollar's resilience."

This week's range of likely USD/CAD and GBP/USD scenarios implies a 1.6608-to-1.6974 range for a downward biased Pound-to-Canadian Dollar rate, although Monday's speech from new Bank of Canada (BoC) governor Tiff Macklem is a downside risk for the Canadian Dollar while IHS Markit PMI surveys could be an upside risk for the Pound at 09:30 on Tuesday. BoC Governor Macklem will speak about monetary policy at 16:00 Monday.

Sterling's attention will turn Tuesday to PMI surveys, with investors most interested in the pulse of the services sector, the UK's economic engine. Consensus looks for the IHS Markit Services PMI to rise from 29 to 39.1, extending the rebound off April's historic low of 12.3. However, much also depends on risk appetite in the wider market and if the negative BoE-related sentiment persists toward Sterling this week.

Sterling's correlation with stock markets ebbs and flows between positive and negative but the British unit has been especially susceptible to bouts of risk aversion since the beginning of the coronavirus crisis, which could mean it's vulnerable to a continued correction in the U.S. Dollar as well as a step-up in concerns about a second wave of the virus.

"The one-way trade of buying risky assets might be over and volatility should remain elevated since the US economic recovery is not accompanied with a stronger rebound in the labor market. Adding to the uncertainty are the current virus resurgence concerns, what to expect in the fall, end of month volatility from the rebalancing of the S&P and Russell indexes, and a wrath of geopolitical risks," says Ed Moya, a senior market analyst at Oanda. 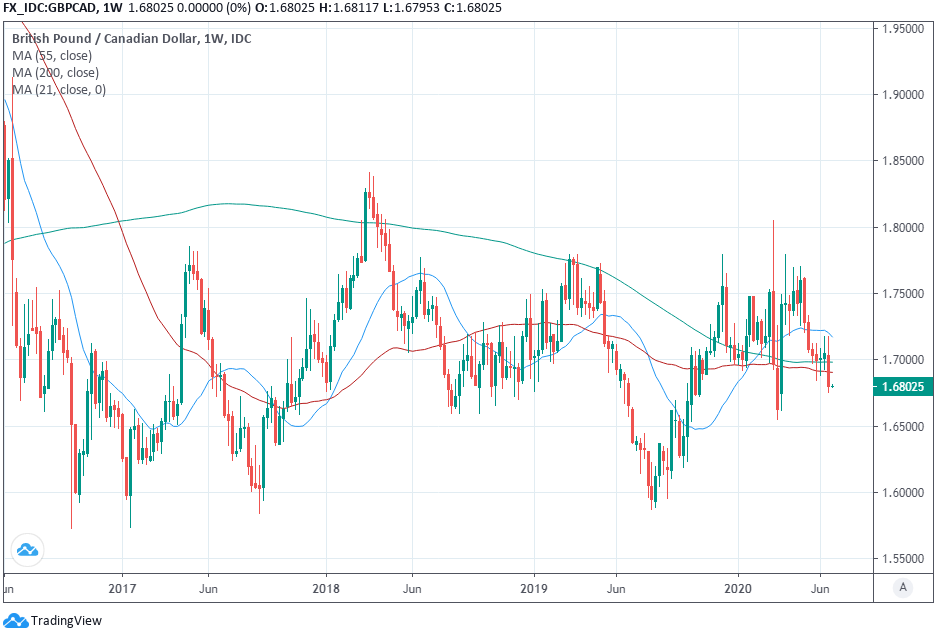