The Pound underperformed last week while the greenback steadied, leading the Pound-to-Dollar rate to unravel again on the charts in a move that's being tipped to extend over the coming days.

Losses saw the Pound-to-Dollar rate turn further away from early June highs before a rebellion over the latest Bank of England (BoE) policy decision and an absence of any meaningful development on the Brexit front drove it back to and then below the 1.24 handle heading into the weekend.

Sterling fell deeper into the red at the tailend of a week dominated by coronavirus concerns as China raced to contain new clusters of infections in Beijing as investors were contemplating the potential implications of growing second waves in a number of U.S. states.

These familiar concerns will play a role in shaping the risk appetite that's set the agenda in financial markets for near-on three months, although analysts say there's upside risks to the Dollar and downside risks to most other things given the scale and speed of the recent recovery and fresh coronavirus concerns.

"Risk off/ risk on is likely to remain a key driver of USD performance but tentative signs of a stronger US economic recovery pose upside risks for USD," says Lee Hardman, a currency analyst at MUFG. "The GBP has failed to derive any relief from the improvement in the Brexit negotiation mood music and from the reduced likelihood of the BoE implementing negative rates anytime soon if at all. The market clearly wants to continue to sell the GBP at this point in time even as fundamental downside risks have eased." 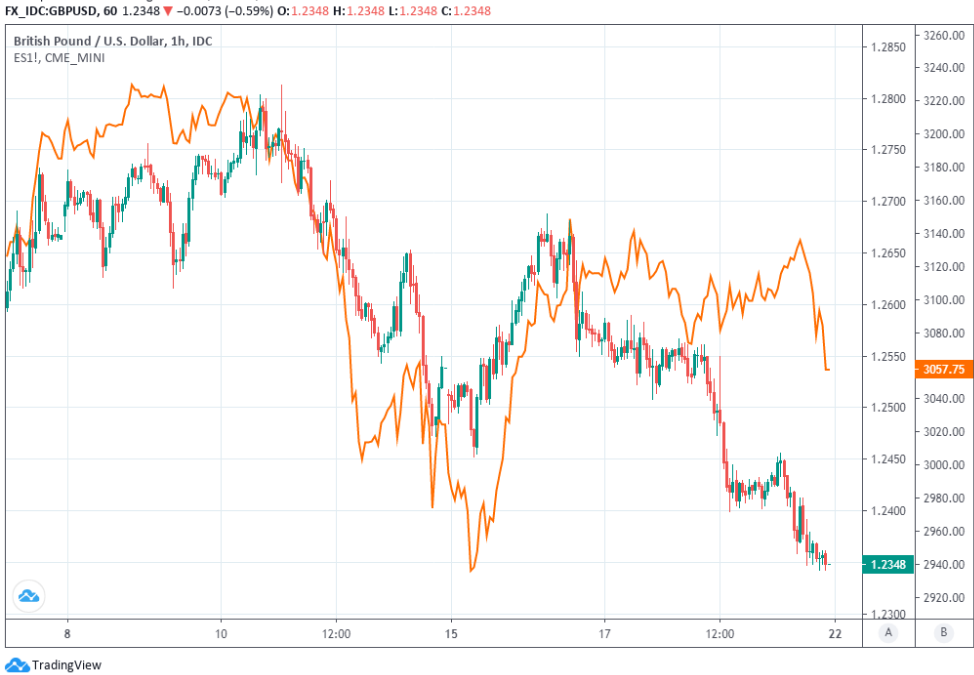 Above: Pound-to-Dollar rate shown at hourly intervals with S&P 500 (Orange) .

Flagging stock markets added insult to injury for a Pound already wounded by rebellion over the latest BoE policy update. Hardman and the MUFG team say the greenback is oversold and the market has clearly fallen out of love with Sterling again, leaving the Pound-to-Dollar rate vulnerable to further declines.

"We favour short GBP exposure against the USD as we continue to see scope for the USD to rebound further against European currencies from heavily oversold levels," Hardman says.

Hardman advocated that clients sell the Pound at 1.24 Friday and is looking for a move down to 1.21 in the coming days, citing the market's aversion to Sterling but also the prospect of a Dollar rebound that could gain fundamental support if U.S. economic data continues to better that of the UK. U.S. retail sales rose at a faster pace in May than they'd fallen in April, according to figures released last week, whereas UK sales failed to fully close the gap opened up previously.

A fall to 1.21 would leave Sterling resting on the 50% Fibonacci retracement of its March-to-April recovery trend, an area that's gotten the attention of technical analysts since the Pound fell below its 55-day moving-average at 1.2419.

"GBP/USD recently failed at the 78.6% retracement at 1.2818 (of the move down from the March peak) and has now eroded the short term uptrend and the 55 day ma at 1.2419," says Karen Jones, head of technical analysis for currencies, commodities and bonds at Commerzbank. "Near term it is struggling with its 200 day ma at 1.2687 and is on the defensive. Below the 55 day ma alleviates topside pressure and triggers a slide back to 1.2278 and the 50% retracement of the March-to-April advance at 1.2110."

The Pound had been buoyed early last week by gains in the stock markets it's been following and an agreement by Prime Minister Boris Johnson and EU chief executive Ursula Von der Leyento accelerate efforts at reaching a trade deal, but was wounded in the latter half of the week when the BoE's decision to slow the pace at which it buys government bonds was perceived as a lessening of support for the economy at a time when it's still in the mire. 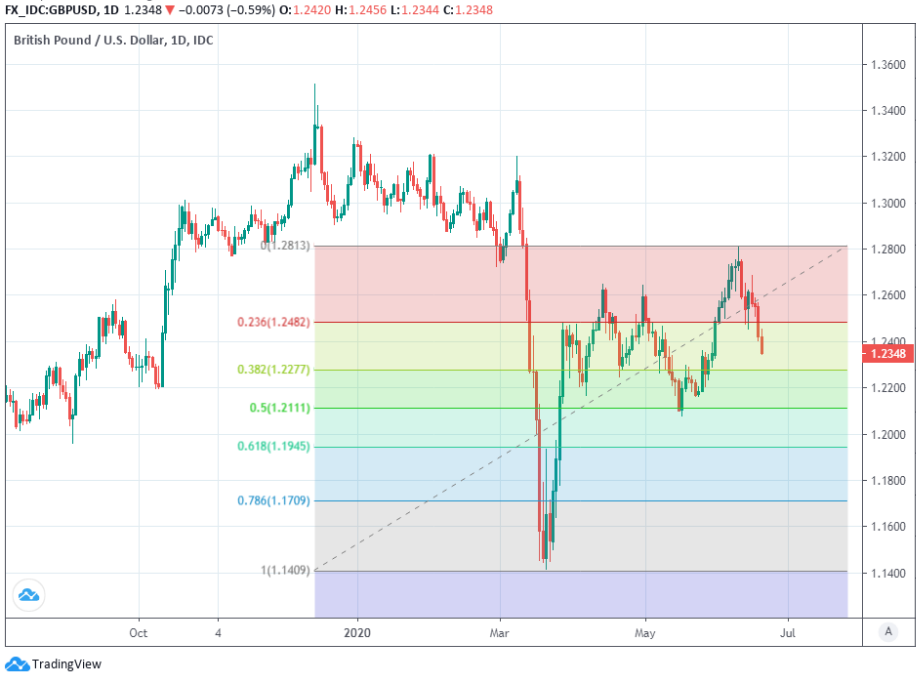 Above: Pound-to-Dollar rate shown at daily intervals with Fibonacci retracements of March rebound.

"The GBP’s slide through yesterday’s session and so far today has left it trading below its 50DMA (1.2426) for the first time since Jun 1 as it heads for a second straight weekly loss and continues to build a clear downtrend from its brief push above 1.28 just seven sessions ago," says Juan Manuel Herrera, a strategist at Scotiabank. "The 1.24 level itself now [acts] as resistance on a GBP rebound ahead of a congestion area around 1.2425."

The BoE was perceived as stepping back too early at the same time as the government seeks to slowly but surely wind down its costly wage subsidy scheme, but continues to impose equally costly social distancing regulations that harm consumer facing 'bricks and mortar' establishments. The UK lags its developed world counterparts in reopening so the economy risks underperforming others, which is an additional weight on the Pound and one that also gives economic data relevance again.

June's flash PMI surveys are out at 09:30 on Tuesday, with markets most interested in the pulse of the services sector, the UK's economic engine. Consensus looks for the IHS Markit Services PMI to rise from 29 to 39.1, extending the rebound off April's historic low of 12.3, but this would still see the UK barometer trailing its Eurozone counterpart. The manufacturing PMI is seen rising by a lesser 4.5 points from 40.7 to 45.2.

Meanwhile, in the U.S., equivalent surveys are out at 14:45 with consensus looking a rebound in manufacturing from 39.8 to the 50.0 level that denotes the difference between industry expansion and industry contraction. The services barometer is expected to rise fom 37.5 to 46.9. Such numbers could reinforce market perceptions of a U.S. economic outperformance.

Investors will also give greater scrutiny to daily coronavirus infection numbers given accelerating second waves in a number of reopened states and after two consecutive days in which the world's largest economy reported its highest numbers since the beginning of May. But any further evidence that the second wave is building would simply feed the Dollar correction and risk further inciting the nascent unravelling of the Pound-to-Dollar rate.

"We do not see major risks of a second wave in the US or other large economies, and our economists forecast a relatively steep rebound in activity over the next few months—indeed, they revisedup their near-term forecasts last week. This should allow for a continued pro-cyclical rotation across assets and renewed Dollar depreciation. But recent developments are a good reminder that “bad news” from the US can paradoxically lift the Dollar if it affects investor risk appetite or raises questions about the global economic outlook," says Zach Pandl, global co-head of foreign exchange strategy at Goldman Sachs. 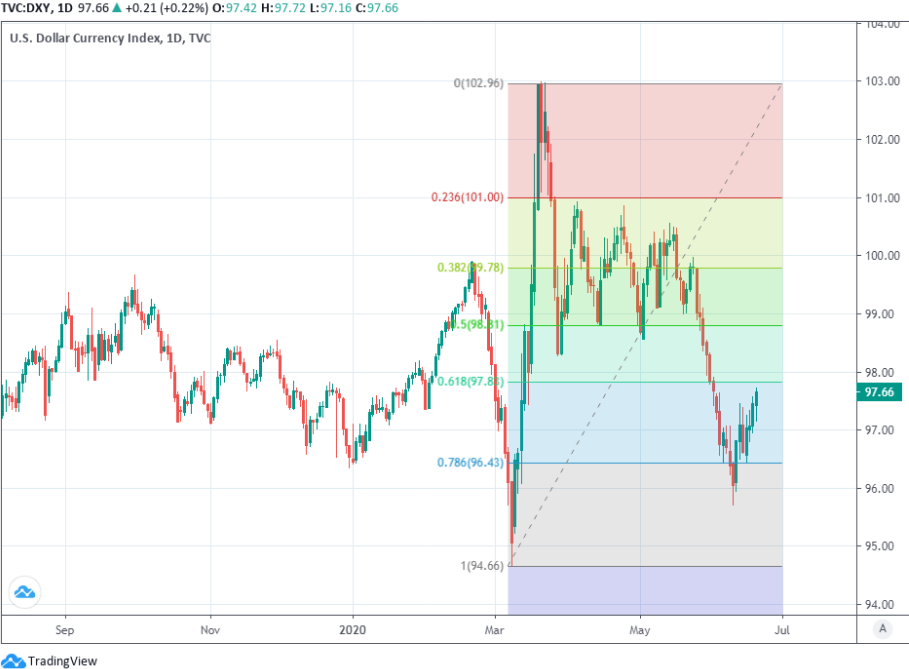 Above: Dollar Index shown at daily intervals with Fibonacci retracements of March rally.