- USD/CAD rate tipped as a buy at TD Securities amid oil woes.

- Correlation with oil rising, pushing CAD back to millenium lows.

The Canadian Dollar underperformed all major rivals Wednesday amid fresh losses for ICE crude oil futures, underlining why the Loonie has been tipped as a sell by the Toronto-headquartered TD Securities, whose analysts cite a rising correlation between the currency and oil prices as cause for concern.

Canada's Dollar was in broad retreat Wednesday as commodity prices and other risk assets got off to a poor start to the second quarter, with investors favouring safe-havens in response to government disclosures that showed the number of coronavirus infections and deaths regaining momentum after a lull over the weekend. That's put paid to the fallacy of a meaningful slowdown in the spread of the deadly viral pneumonia.

Investors appeared to think they'd glimpsed light at the end of the coronavirus tunnel in not only Italy, but also France, the UK and other countries after the weekend produced a hat-trick of back-to-back declines in the number of new virus cases reported. But figures released Tuesday revealed this to have been little more than a mirage of water in the desert.

Only Italy has seen a sustained improvement while others who were slower to 'lockdown' may still have a long road ahead, the precise length of which could be closely connected to the size of the average household in the affected economies since burning out requires the infection to exhaust the available supply of prospective hosts in the homes it's already in.

The implications of this for the global economy has led TD to tip USD/CAD as a buy and in the process, place the Canadian Dollar up for sale in anticipation of a return to new millenium lows over the coming weeks. The Toronto-headquartered global investment bank says the rising 'beta' between the Loonie and oil prices should go on lifting USD/CAD for a while yet and potentially even after the coronavirus outbreak is brought under control. 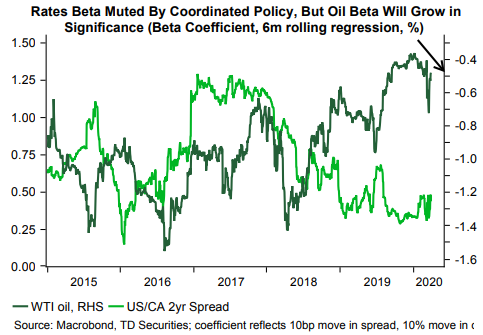 Oil is a significant breadwinner for the Canadian economy and with WTI crude oil prices back at levels which last prevailed at the beginning of the new millenium, after falling nearly 70% thus far in 2020, the Canadian Dollar has also depreciated sharply. WTI futures were at $20.26 per barrel Wednesday and with 2020 aside, the last time these levels were seen was in March 2002 just ahead of the build-up to the invasion of Iraq.

It's probably no coincidence that with such prices having pushed Western Canada Select to new record lows last month, the USD/CAD rate has recently hit 1.4660, which is close to its highest level since March 2003 and the fateful invasion in the Gulf. Last week's broad U.S. Dollar weakness saw the USD/CAD rate fall back to the 1.40 handle but TD has taken this as an open invitation to bet on fresh declines in the Canadian Dollar.

"We think the CAD is uniquely positioned to suffer. Beyond the sudden stop nature of this crisis, the CAD has the added drag of an oil terms of trade shock. Our commodity strategists are particularly concerned that this will persist for some time. This will acutely weigh on business investment which has not recovered since the 2014/5 oil collapse. Government support is welcome, but it will not prevent second round effects of defaults/bankruptcies," says Mark McCormick, head of FX strategy at TD.

McCormick says Canada's economy will be disproportionately impacted by the coronavirus pandemic that's put most of the world's major economies into a form of 'lockdown' because of the resulting 60% decline in oil prices - the big economic breadwinner - and the fact the public as well as private sector balance sheet is not what it once was. Government debt is higher than it was in the 2014-16 oil crisis as well as the 2008 financial crisis while household indebtedness has increased sharply in the last decade. He and the TD team say the resulting economic fallout should be enough to lift the USD/CAD rate back to 1.4650 over the coming weeks and months. 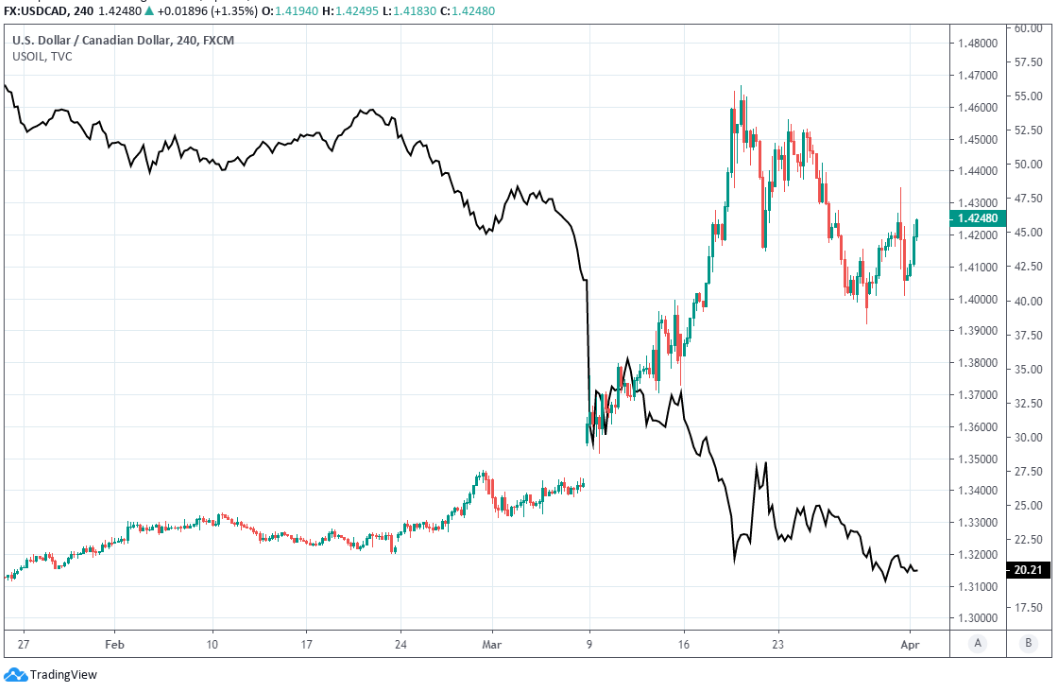 Quite what a 1.4650 USD/CAD rate will mean for the Pound-Canadian Dollar exchange rate depends heavily on price action in the GBP/USD rate over the coming weeks. After all, the Pound-Canadian Dollar rate is simply the sum of GBP/USD over CAD/USD. Technical analysts say GBP/USD should fall from near 1.24 Wednesday, back toward 1.15 over the coming weeks, although the relative pace of decline in GBP/USD and CAD/USD will be key in determining the GBP/CAD outcome.

Combining a USD/CAD rate of 1.4650 and a GBP/USD rate of 1.15 produces a Pound-Canadian Dollar ate of 1.6849 that's far below Wednesday's 1.7606 level and implies just more than 4% downside from current prices. However, should the GBP/USD rate put in a resilient performance that deprives the U.S. Dollar of a return toward the 1.15 level, or 0.8695 for USD/GBP, then the Pound-Canadian Dollar rate might retain its current upside bias.

The Pound-Canadian Dollar rate has recovered its footing in the last week as international demand for U.S. Dollars ebbed, leading the exchange rate back above the 23.6% Fibonacci retracement of the post-referendum downtrend and a cluster of moving averages near that might now provide Sterling with support near to 1.72. Technical analysts at Canada's Scotiabank say the outlook for this exchange rate is "mixed" and that there's "major, long-term resistance" lurking on the path ahead, although the Nova Scotian firm does look for a rising GBP/USD rate in the short-term that would be supportive of GBP/CAD if USD/CAD retains its upside bias.

"We think the 1.78/1.80 zone remains major, long-term resistance for the GBP and there is significant, long term resistance above here at 1.84 (early 2018 high and potential 1.58 double bottom trigger). A clear move through 1.80 would suggest the GBP is gathering momentum for a test of that trigger," says Scotiabank's Juan Manuel Herrera in a research note this week. 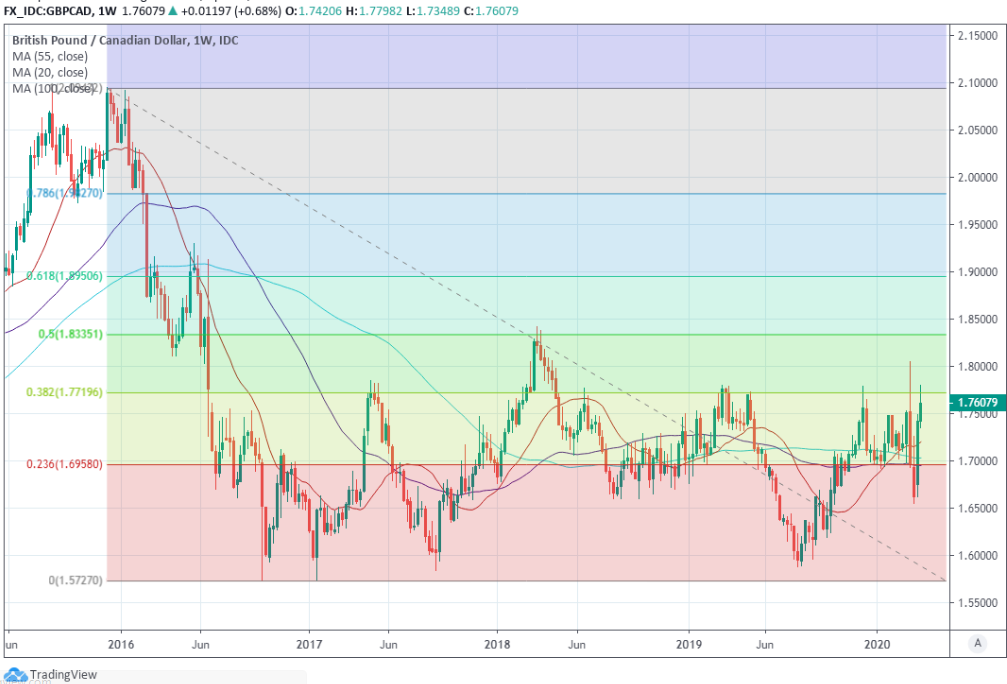