The Pound-to-Dollar rate was nearing the end of a 'dead cat bounce' Tuesday as momentum ebbed from the market, which leaves it vulnerable to a return toward the 1985 low seen earlier in March, according to technical analysts.

Sterling has risen more than 5% against the Dollar over the last five trading days and saw its best performance since May 2009 in the week ending last Friday, although the upward correction has been driven more by a sharp weakening of the Dollar than it has strength in the British currency. The Dollar surged through early March until concerted action from the Federal Reserve and others stopped the unit in its tracks just more than a week ago.

"US stock prices and Treasury yields plummeted due to the spread of COVID-19, and markets showed a risk-avoidance reaction. Later, while stocks were being sold down, US Treasuries and even gold were sold as some investors opted to hold cash rather than these supposedly safe assets," says Shuichi Ohsaki, a strategist at BofA Global Research. "If the market calms down when fiscal year-end has passed, funding costs could decline further, like those for one-week funds at normal times." 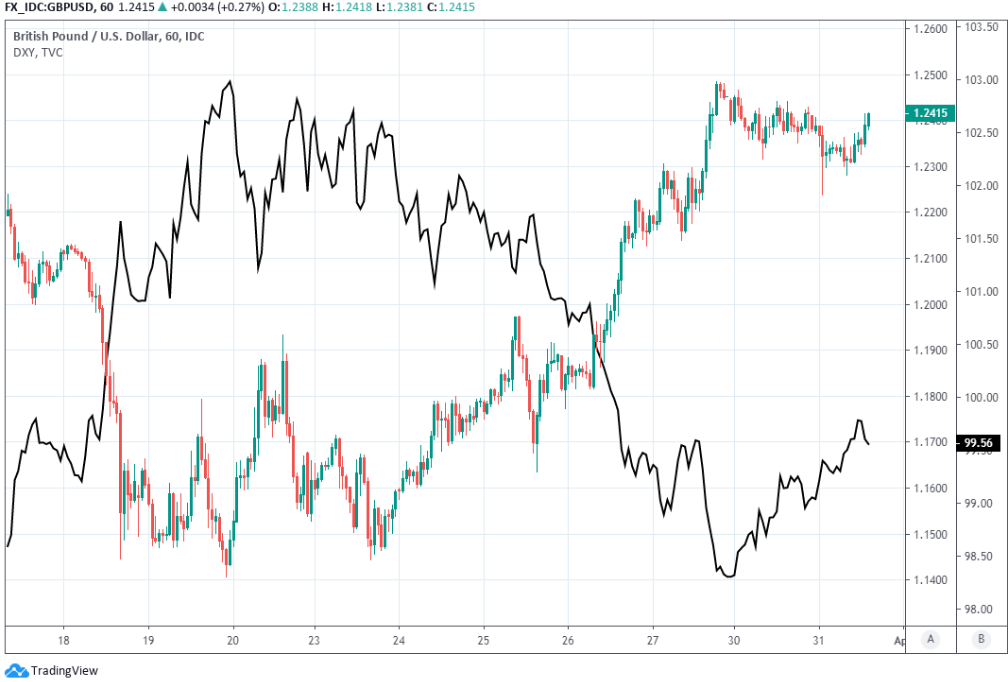 "Sterling was the currency hit hardest by lack of liquidity and concern about access to dollars in early March, falling by around 10% in value. But it's also been seen the strongest bounce as the fed has rolled out measures to tackle the issue," says Kit Juckes, chief FX strategist at Societe Generale. "In a low-inflation world where no-one really wants a much stronger currency and even less, accidentally tighter monetary policy, the Fed is likely to win this fight against the market (eventually)."

The Dollar benefited from mayhem in financial markets driven by fears over what coronavirus containment efforts might do to the global economy, which stoked almost unprecedented demand for cash and hurt just about every other national unit to some extent as investors sought the perceived safety and liquidity of the world's reserve currency. But a record injection of cheap Dollars into the financial system has since tamed the greenback.

Nonetheless, and despite the fact that Federal Reserve actions are expected to prevent a repeat of the kind of extreme Dollar demand seen in early March, there aren't many analysts out there who're willing to bet on meaningful decline in the greenback any time soon. Most do still tip the Dollar to weaken eventually although many say that decisive signs of an end to the coronavirus outbreak could be necessary before that happens.

“If late 2008/2009 is any guide the USD is likely to stabilise soon and resume a broadly strong tone. Back in 2008/09, once the initial USD squeeze and partial reversal were complete, the USD subsequently regained its footing and held solid well into mid-2009. If that scenario plays out again in 2020 that would imply currencies are on the cusp of once again broadly tracking their sensitivity to risk aversion,” says Richard Franulovich, head of FX strategy at Westpac. 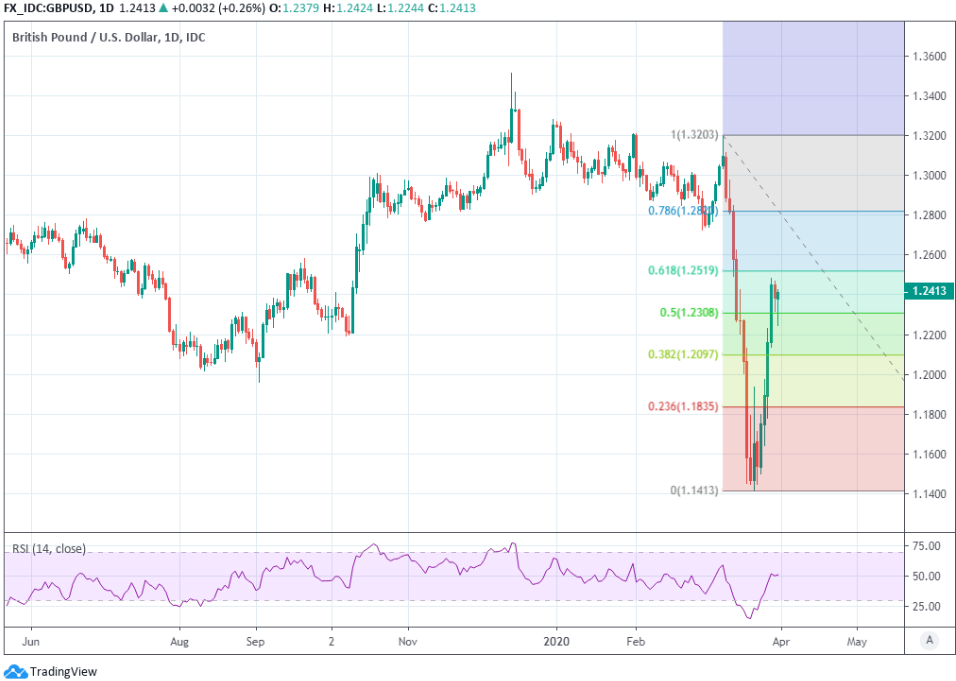 Above: Pound-to-Dollar Rate shown at daily intervals, momentum wains ahead of 61.8% retracement of March downtrend.

Dollar weakness enabled the Pound-to-Dollar rate to retrace more than half its March decline, which had seen Sterling fall to its lowest since 1985, but momentum behind the up move has wained in recent days. The relative-strength-index that measures momentum in the exchange rate has failed to record a new high on both the four-hour and daily charts despite prices going on to set new highs, in a technical phenomenon known as 'bearish divergence'.

That bearish divergence on the charts indicates the up-move could be about to run out of steam and may eventually leave the last week's 5% gain looking more like a 'dead cat bounce' than the beginnings of a sustained recovery. Whether or not Sterling overcomes the 61.8% retracement of the March downtrend, located at 1.2516  and just above Tuesday's market price will be key to the short-term outlook. And if the British currency can't overcome that level it may be just a matter of time before 1.15 is revisited.

"GBP/USD is consolidating below the 61.8% retracement at 1.2516 and the 200 day ma at 1.2662. Currently the market is indicated to fail here, both on the daily chart and the intraday charts. Nearby support lies at 1.2194 and failure here should re-target the 1.1958 September 2019 low. Failure here should be enough to alleviate upside pressure and refocus attention on 1.1491, the 2016 low and last week’s low at 1.1409," says Karen Jones, head of technical analysis for currencies, commodities and bonds at Commerzbank.