Sterling surged into the weekend after benefiting disproportionately from a broad retreat by the U.S. greenback. Sterling's gains were disproportionate to most rivals last week but they were proportionate with the scale of losses suffered in the prior week. Gains built despite revelations that Prime Minister Boris Johnson and Health Secretary Matt Hancock have both contracted coronavirus, which wobbled the Pound briefly but did not deny it a strong finish to the week.

Meanwhile, Canada's Dollar also capitalised on the deflating greenback, which fell nearly 4% last week as risk assets like stocks recovered double-digit percentages from earlier lows, helping pull the USD/CAD rate down more than 2% despite the Bank of Canada (BoC) cutting its interest rate to the 'effective lower bound' of 0.25% and starting for the first time, a Canadian quantitative easing program (QE). QE crushes government bond yields and normally the currencies that sit alongside them, although the BoC's didn't deter the Loonie from its pursuit of an in-retreat U.S. Dollar.

The Pound-to-Canadian Dollar rate still rose sharply despite the Loonie's gains, clearing the 20-day, 55-day and 100-day moving-averages on the daily chart in the process. Meanwhile, on the weekly chart, the Pound sprung back above the 23.6% Fibonacci retracement of the post-referendum downtrend and cleared the  20-week, 55-week and 100-week moving-averages at the same time before closing comfortably above all on for the week on Friday. That could mean further gains are likely in the coming weeks and months. 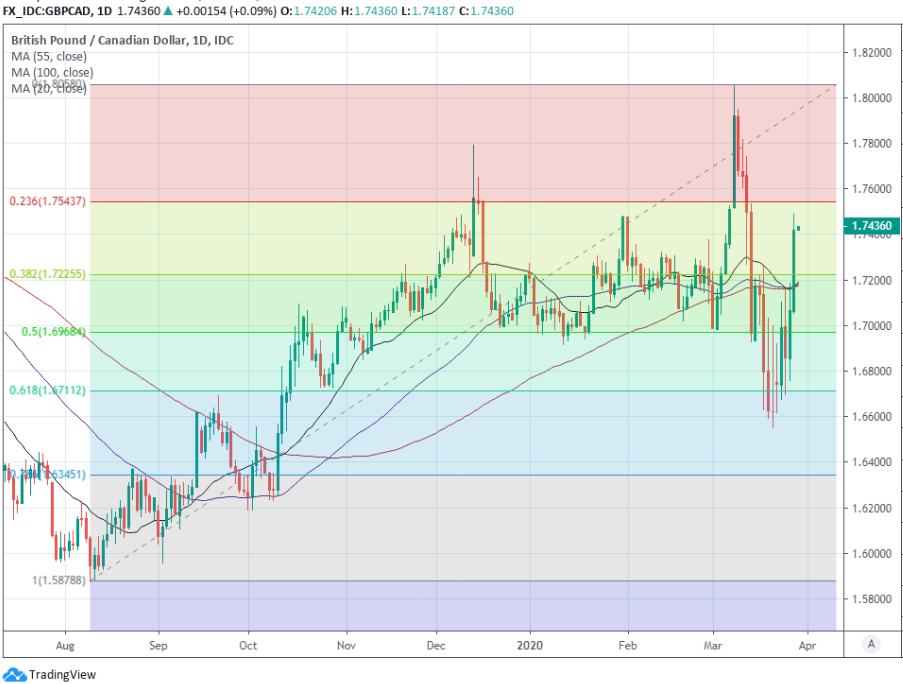 Above: GBP/CAD rate at daily intervals with Fibonacci retracements of post-referendum downtrend and moving-averages.

"We note that the longer term charts are shaping up to be potentially GBP bullish if the GBP can stabilize and recover ground in the next few weeks/months, " says Juan Manuel Herrera, a strategist at Scotiabank.

The Pound-to-Canadian Dollar rate is the sum of GBP/USD over CAD/USD which means Sterling needs the GBP/USD rate to outpace any decline in USD/CAD, or for it to decline at a lesser pace than any increase in USD/CAD, in order to avoid handing back last weeks' gains to the Loonie. However, given GBP/USD has encountered resistance on the charts, Sterling may be vulnerable to a short-term correction lower against the Loonie. That would be especially the case if the USD/CAD remained heavy this week.

Canada's Dollar also rode the risk asset recovery last week and appeared to overlook the BoC's QE in favour of focusing on Finance Minister Bill Morneau who announced shortly after that the government will be spending C$65bn to support small business through the coronavirus crisis that's left almost no country untouched. Morneau also said the government would provide C$30bn of additional assistance in the form of deferred taxes, taking the value of the government's support package up to 5% of GDP. 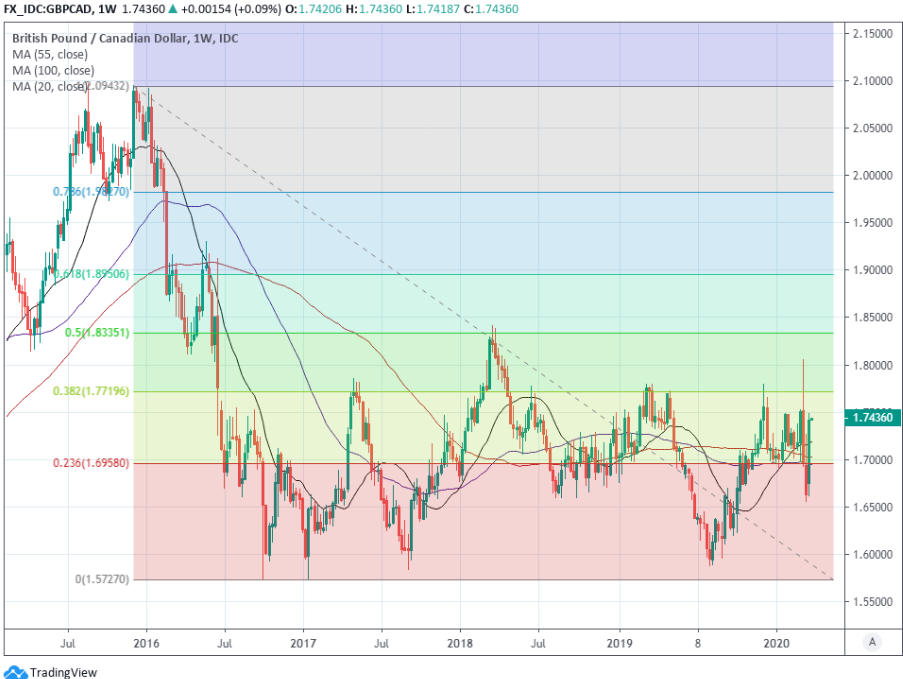 Above: GBP/CAD rate at weekly intervals with Fibonacci retracements of post-referendum downtrend and moving-averages.

"The BoC’s bazooka looks impressive but there is nothing that compares to the Fed’s “unlimited QE” promise. We think this will weigh on the USD broadly in the coming months. Still, the CAD has under-performed against its G10 peers this week and the recent improvement in sentiment, reflected in risk-reversal pricing has been checked. We think the CAD may struggle to rally further against the USD for now. We see a potential range next week of 1.3950/1.4250," says Shaun Osborne, chief FX strategist at Scotiabank.

Much like Sterling, the Loonie's performance will be dictated as much by the general mood in the market and investor appetite for U.S. Dollars this week as it will anything else. Both recovered from earlier losses last week after the Federal Reserve flooded markets with cheap Dollars to address a shortage that had led interbank lending rates to spike sharply and posed as a further headwind to the U.S. and global economies.

Many analysts say the U.S. Dollar should stabilise this week, although it's no longer so clear what such price action would mean for the Pound-to-Canadian Dollar rate. Steep earlier losses for risk assets and the resulting viscous surge by the U.S. Dollar appeared to all but dismantle the usual pecking order among major currencies, whose relative performance is often determined in part by correlations with risk assets like stocks and oil. Typically those correlations would see the Pound-to-Canadian Dollar rate rising in times of strife, but Sterling's weakness saw it dragged sharply lower earlier this month. 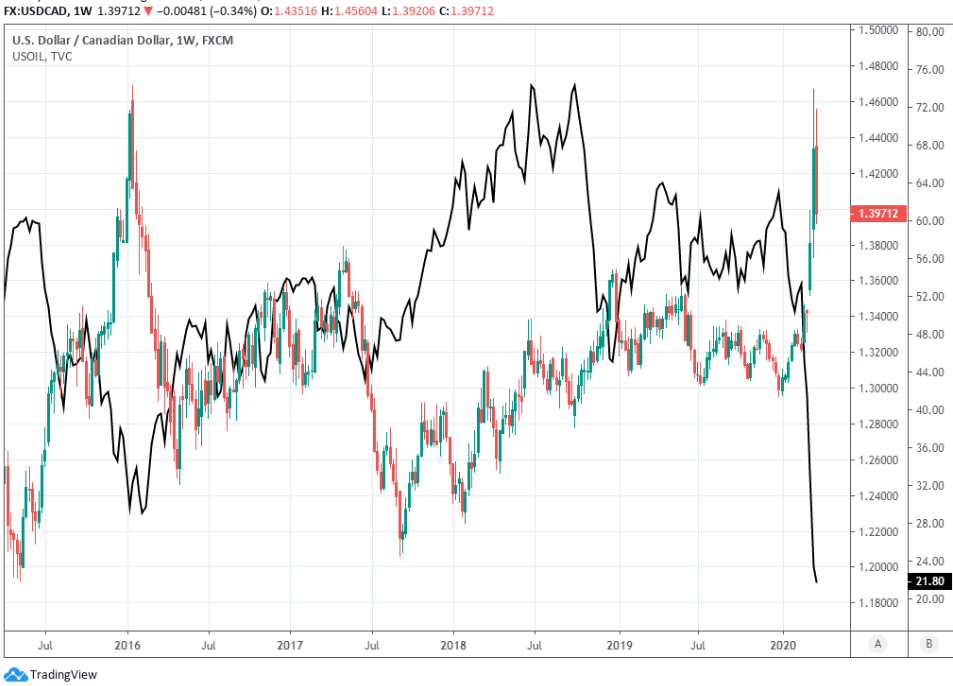