- Will watch households and housing market closely up ahead.

- But GBP is close to usurping CAD's spot as top 2019 performer.

The Canadian Dollar soared Wednesday after the Bank of Canada (BoC) surprised markets with what was an almost 'hawkish' assessment of the global and domestic economic outlooks, leading to a reversal of intraday stability and potentially setting the Loonie up for further gains up ahead.

Canada's central bank left its cash rate unchanged at 1.75% in its final meeting of 2019, in line with market expectations, but the tone of the accompanying statement took financial markets by surprise. Many had anticipated a reiteration of earlier downbeat rhetoric but received no such thing on the day.

The BoC said Wednesday it sees "nascent evidence" of a stabilisation in the global economy, weakness of which has been a key driver of the bank's caution this year and also of market doubts over whether its sustainable for Canada to continue setting itself apart from the major economy crowd.

Canada's robust economic condition was acknowledged, with the BoC noting an unexpected rise in business investment for the recent quarter, which was accompanied by strong increases in housing construction.

Household resilience was also noted, even though consumer spending in the recent GDP report was not as good as some had hoped. 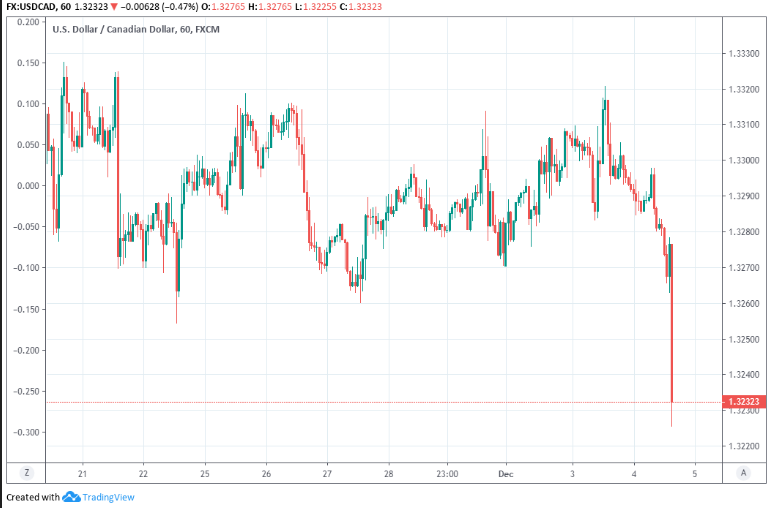 "Today's statment dialed back the dovish rhetoric of the prior statement, and as such suggests that the BoC is pretty firmly on hold for now," says Andrew Grantham, an economist at CIBC Capital Markets. "Indeed, the statement overall was maybe a little more hawkish than markets were expecting, and investors will now be dialing back the probability of a BoC interest rate cut in the near-term which has seen bond yields rise."

Inflation is currently in-line with the BoC's target and is expected by the bank to remain there through the next couple of years, suggesting steady interest rates for the foreseeable future. Rate decisions are normally only made in relation to the outlook for domestic price pressures, which is sensitive to the ebb and flow of economic growth. Quickening or 'above-trend' growth tends to result in more inflation, higher interest rates and often a stronger currency.

Canadian economic resilience has seen the cash rate left unchanged all year, even as the Federal Reserve (Fed) and others have cut rates repeatedly. That's elevated the Loonie to the top of the major currency league table, although recent months and BoC communications had planted the seeds of doubt in the collective mind of the market.

Governor Stephen Poloz was reported to have told an audience at the Ontario Securities Commission that current Canadian interest rates are "about right" on November 22, only days before Deputy Governor Carolyn Wilkins had made other comments that suggested a rate cut could be imminent. And the BoC itself, in its official interest rate statement, said in October the economy's resilience would be tested by a weak global backdrop in the months ahead. 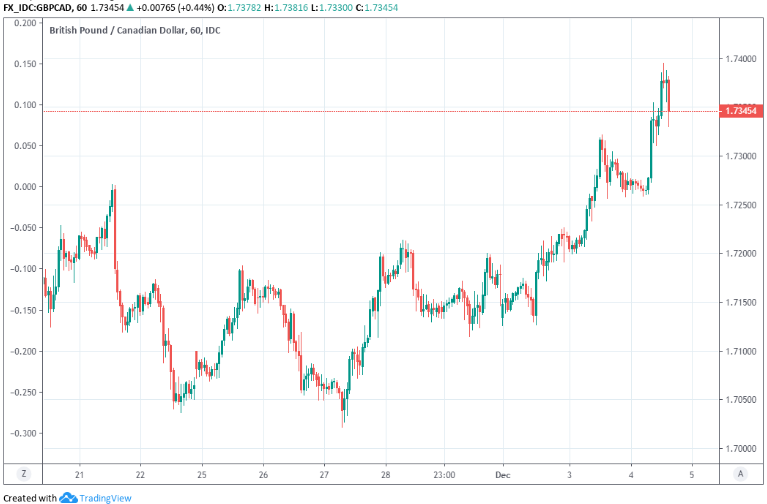 "Things can suddenly change for the better for the Canadian dollar and other commodity currencies if, as we expect, the U.S. and China agree to a truce in their ongoing trade war, and the U.S. Congress finally approves USMCA. As such, we are keeping unchanged our forecast for USDCAD to head towards 1.28 by 2020Q1," says Stefane Marion, chief economist and strategist at National Bank of Canada. "We continue to expect the central bank to refrain from cutting interest rates over the near to medium term."

Since October's statement, PMI surveys of the troubled global manufacturing sector have bounced, suggesting stabilisation, while there's even been signs of an economic thaw in some parts of Europe. There were also mutual claims from the U.S. and China of progress in efforts to end the trade war, although headlines around the tariff fight have again turned to a headwind this week and markets are still on high alert for fresh tape bombs.

The Canadian Dollar rose against the U.S. greenback and Pound in response to the BoC's tone. That performance came as America's 'big Dollar' weakened in response to poor U.S. economic data and easing concerns about the trade war, although the Loonie did manage to stop in its tracks a Pound Sterling that was also rallying. And many strategists have suggested the USD/CAD rate could be set for further losses in the short-term, although opinions on the GBP/CAD rate are more divided.

There were also other factors at work on the Loonie, including speculation about Organization of Petroleum Exporting Countries (OPEC) oil production curbs and fluctuating odds of a long-delayed U.S. ratification of the pact that's set to replace the North American Free Trade Agreement.

"We think the short term undertone suggests USDCAD’s technical risks are tilted a little lower, with spot edging below two-week tend support (1.3298, now resistance) on the intraday chart. Another rejection above 1.33 yesterday adds to the impression of steady CAD bid interest on weakness. We see support at 1.3275, key support is 1.3255, ahead of a push back to 1.3195/00," says Juan Manuel Herrera, an strategist at Scotiabank. 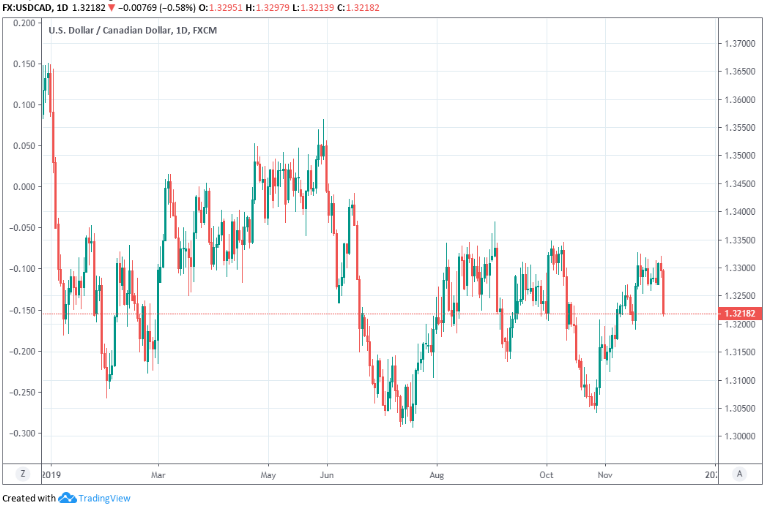 Canada's Dollar has risen against every one of its major rivals in 2019 although it only held a 0.36% gain over Sterling on Wednesday, which is at risk of being eaten away over the coming weeks.

The Pound-to-Canadian-Dollar is a 'cross rate' that can be calculated at a basic level by dividing GBP/USD over CAD/USD, which means both the latter exchange rate outlooks can impact on its trajectory - and the idea that Sterling has scope to rise further in broad terms up ahead is now a mainstream view.

Assuming the Pound advances on the U.S. Dollar in the weeks ahead, as many do suggest, the USD/CAD rate will need to produce matching declines in order to prevent the Pound-to-Canadian-Dollar rate from moving back into the black. If Pound Sterling is able to recover the 1.74 handle against the Loonie, the British currency would then have usurped its Canadian counterpart of its position as the best performing major currency of 2019.

"The most powerful break today unfolded in GBPUSD on the combination of both a weak USD and a very strong sterling, with flow likely encouraged on the break of the symbolic 1.3000 level," says John Hardy, chief FX strategist at Saxo Bank. "Assuming the UK general election next week unfolds as the consensus expects and hands Boris Johnson’s Tories a clear majority, there may be room for a  rally extension into the next resistance levels." 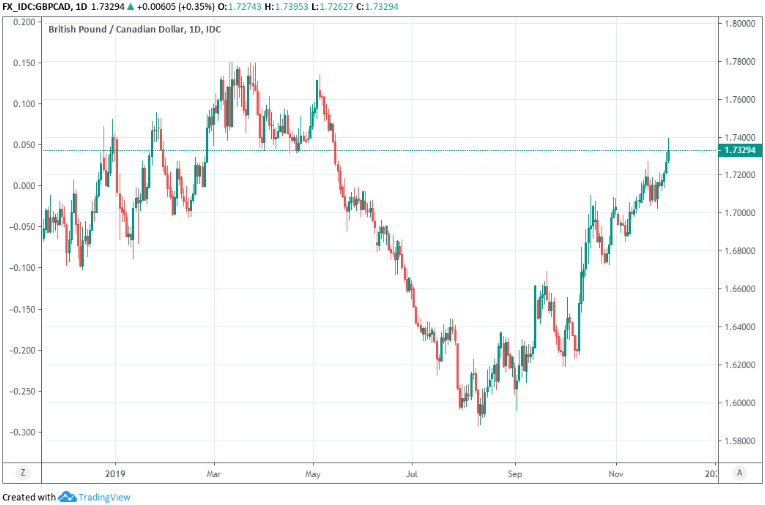 The Pound-to-Canadian Dollar Week Ahead: Finding Support On Charts as BoC Outlook Question…

The Pound closed the Friday session having become the second best performing major currency of the week although there could be further gains in store for the coming days if newfound support on the charts holds and the Bank of England (BoE) eschews a Thursday interest rate cut. 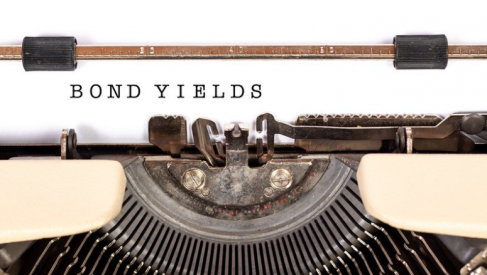 The Canadian Dollar Is Not Out of the BoC's Woods Yet, Despite Strong November Retail Sale…

The Canadian Dollar outperformed all other than safe-haven rivals in the noon session Friday as an upside surprise in December retail sales and a global hunt for yield among investorts lifted the Loonie, which scored one of its best gains over a weeping Pound Sterling.

The Pound-Canadian Dollar recovery off post-election lows was aided this week by signs of a policy flip-flop from the Bank of Canada (BoC) but appetite for Sterling will be tested over the coming days so the short-term outlook for the exchange rate remains unclear.

The Canadian Dollar retreated from Pound Sterling and all other major rivals Tuesday amid broad declines in stock and commodity markets, although Wednesday's Bank of Canada (BoC) interest rate decision is also increasingly coming onto the radar of investors.