The Canadian Dollar downtrend remained intact Friday with more losses against the U.S. Dollar and Pound seen ahead after the third-quarter GDP report failed to dispel doubts over whether current Bank of Canada (BoC) interest rates are really as appropriate as Governor Stephen Poloz recently claimed.

Canada's economy grew by 0.1% in September, Statistics Canada revealed on Friday, in line with the market consensus and unchanged from the pace of expansion seen in August. However, that's was a 'below trend' pace of growth which has dragged the annualised pace of expansion down from 3.7% previously, to just 1.3% for the third-quarter overall.

"The 1.3% annualized growth matched both consensus expectations and the Bank of Canada forecast, although it had some surprises in the composition. Consumer spending didn't improve as much as we expected (up 1.4%), but there were hefty gains in business capital spending and homebuilding to offset that, with inventory destocking and exports dropping to keep the headline in check," says Avery Shenfeld, chief economist at CIBC Capital Markets. 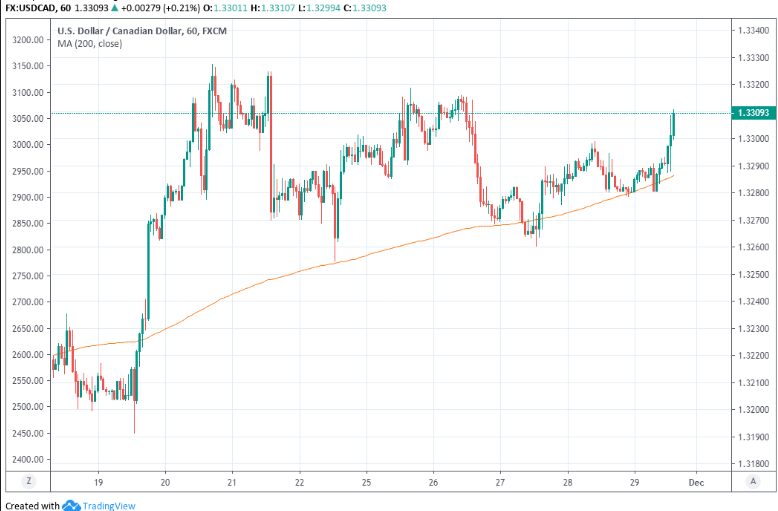 Growth was driven by a surprisingly strong increase in business investment, which rose at its fastest pace since the end of 2017, while household spending also picked up strongly. Spending by Canadian households, a key pillar of the economic expansion and one that is being closely watched by the BoC, rose 0.4% in the recent quarter after having increased by only 0.1% previously.

Meanwhile, GDP-reducing imports were "flat" and growth-additive exports declined 0.4% after a strong earlier quarter. Some of the numbers could make for interesting reading at the BoC, which has fretted of late that business investment might be in retreat amid the U.S.-China trade war. The BoC has said repeatedly it will scrutinise incoming data closely for signs that a slowdown in investment and manufacturing is having an effect on the key household sector.

"The impact of escalating global trade tensions was not as evident as was feared in Q3. Net exports subtracted about half a percent from top-line GDP growth. But, despite trade worries, business investment bounced back 9.5% after falling 7.0% in Q2," says Nathan Janzen, a senior economist at RBC Capital Markets. "The [BoC] will likely take comfort in the increase in business investment as a sign that activity will continue to hold up relatively well." 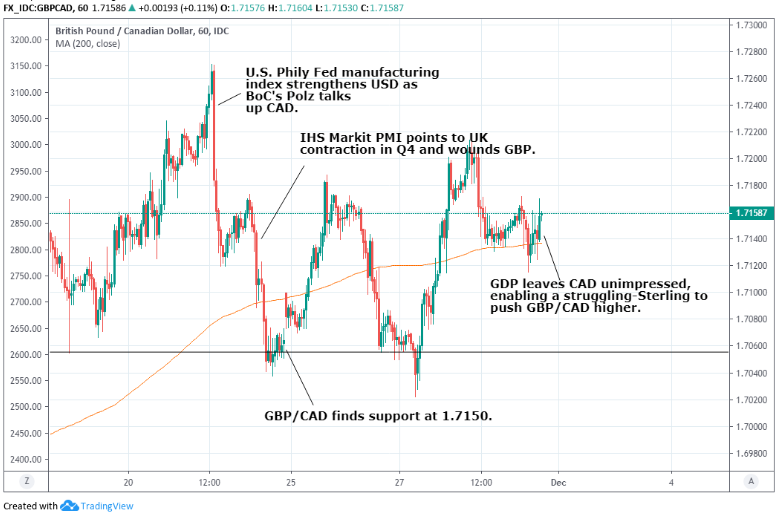 The BoC had forecast a 1.3% expansion for the last quarter and Friday's GDP report not only hit that number on the button, but also produced some upside surprises in some of the individual components of GDP. That could be said to impair any arguments in favour of a BoC rate cut over the coming months, although the Canadian Dollar was clearly unimpressed by the figures.

BoC policymakers have themselves, blown hot and cold on the outlook for Canadian interest rates in recent weeks. In October the bank dropped its regular assertion that the current level of the cash rate is "appropriate," although Governor Stephen Poloz told an audience at the Ontario Securities Commission that current Canadian interest rates are "about right" on November 22. However, and between all of that, Deputy Governor Carolyn Wilkins had led markets to believe a rate cut might be imminent.

Canada's Dollar extended losses against both its U.S. and British rivals in the wake of the report and is fast seeing its previously dominant position in the major currency league tables undermined. Currently the best performing major currency of 2019, the Loonie is at risk of ceding its coveted crown to Pound Sterling in the weeks ahead, which is something that would become more likely if markets come to view a January 2020 BoC rate cut as a credible prospect.

"Our conviction level on USD-CAD moving higher is less this month than last. We saw little reason for a break below 1.30 but at 1.33 the balance of risks is a little more even. It is possible USD-CAD is settling into a 1.3000-1.3350 range, but in the end we expect the BoC to open the door sufficiently wide to a January 2020 rate cut to prompt a break-out higher," says Daragh Maher, Americas head of FX strategy at HSBC. "Weakness in the CAD is likely to persist into year end. The main point of focus is likely to remain the Bank of Canada." 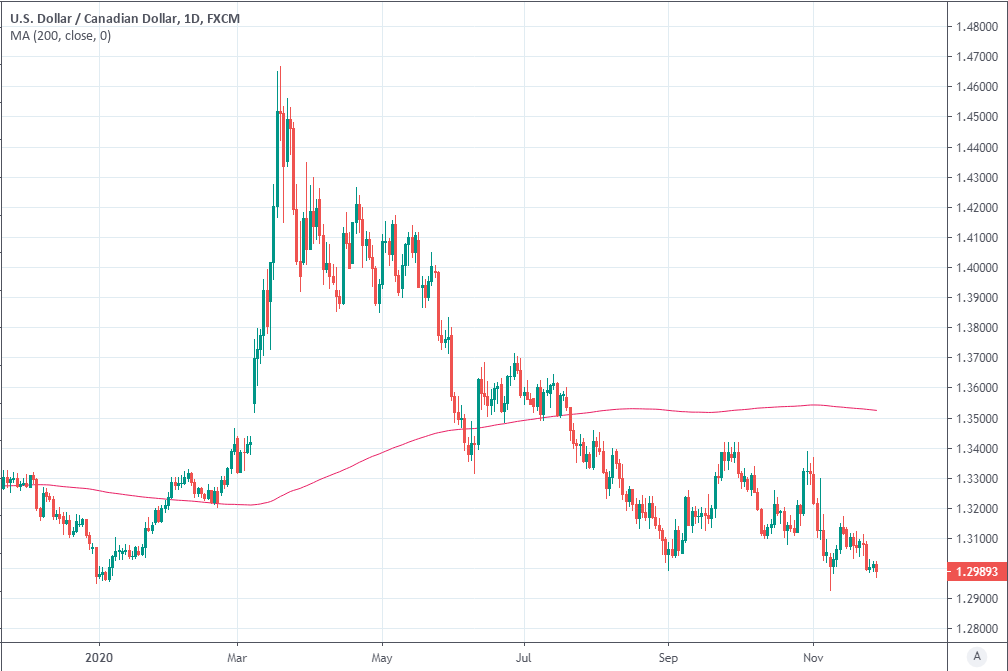 Canada's Dollar has risen against every one of its major rivals in 2019 but only held a 1.46% gain over Sterling on Friday and has been tipped for weeks now to slowly but surely cede further ground to the British currency in the weeks ahead. Technical analysts at Scotiabank, one of Canada's largest lenders, have been flagging for weeks the still-live prospect of a 4% rise in the Pound-to-Canadian-Dollar rate in the short-term.

The BoC will announces its December interest rate decision next Wednesday and although the market looks unanimously for it to leave the cash rate unchanged at 1.75%, some analysts including those at HSBC are mindful that it might open the door to a rate cut in January. That would be bad news for the Canadian Dollar because the overnight-index-swap-implied cash rate for January 22 was 1.70% on Friday, far above the 1.5% level that would prevail in the wake of a standard rate cut.

"We expect the BoC to hold off for now. Nonetheless, we expect the meeting will emphasise the dovish shift in perspective at the BoC and force the market to re-price the probability attached to a January rate cut," says HSBC's Maher. "Clearly there are some aspects of the economy that remain strong, notably the low level of unemployment and the pick-up in wages growth. But the overall image is of a slowing economy."

The USD/CAD rate bounced off of its 200-day moving-average during the noon session Friday, a move which technical analysts might suggest is indicative of further upside in the days ahead, while the Pound-to-Canadian-Dollar rate has held above a key support level at 1.7050. Both developments keep alive and well the fledgling uptrends in the two exchange rates but much will be determined up ahead by the market's reading of the BoC's tea leaves. 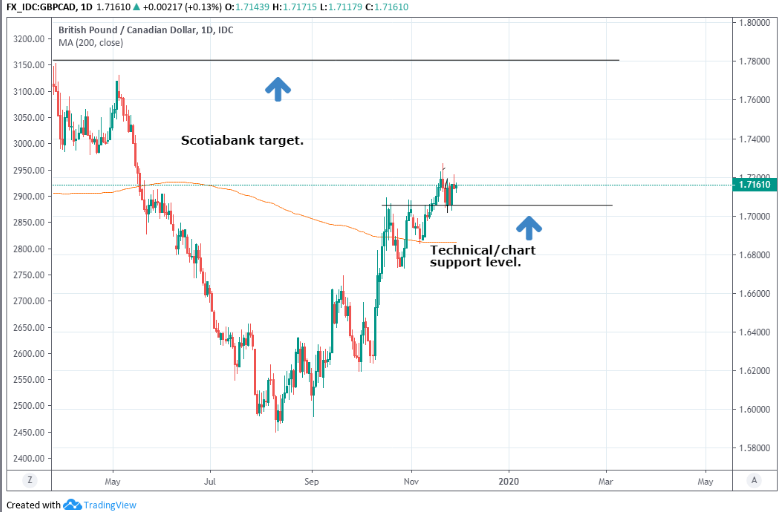