- BoC could be targeting CAD strength

- Investors surprised because of Canada’s resilience

Investors were left dazed and confused after the Bank of Canada (BoC) painted a pessimistic picture in its policy statement on Wednesday, sending the country's currency sharply lower in response.

The sudden pivot in tone at the BoC proved surprising as heading into the October 30 policy meeting investors held the Canadian Dollar aloft owing to the country's superior interest rates.

The Canadian Dollar dived by over 0.5% as a result of the announcement, and GBP/CAD rose strongly due to the CAD weakness, recovering to 1.7044 at the time of writing and almost its 1.7093 October 17 high. 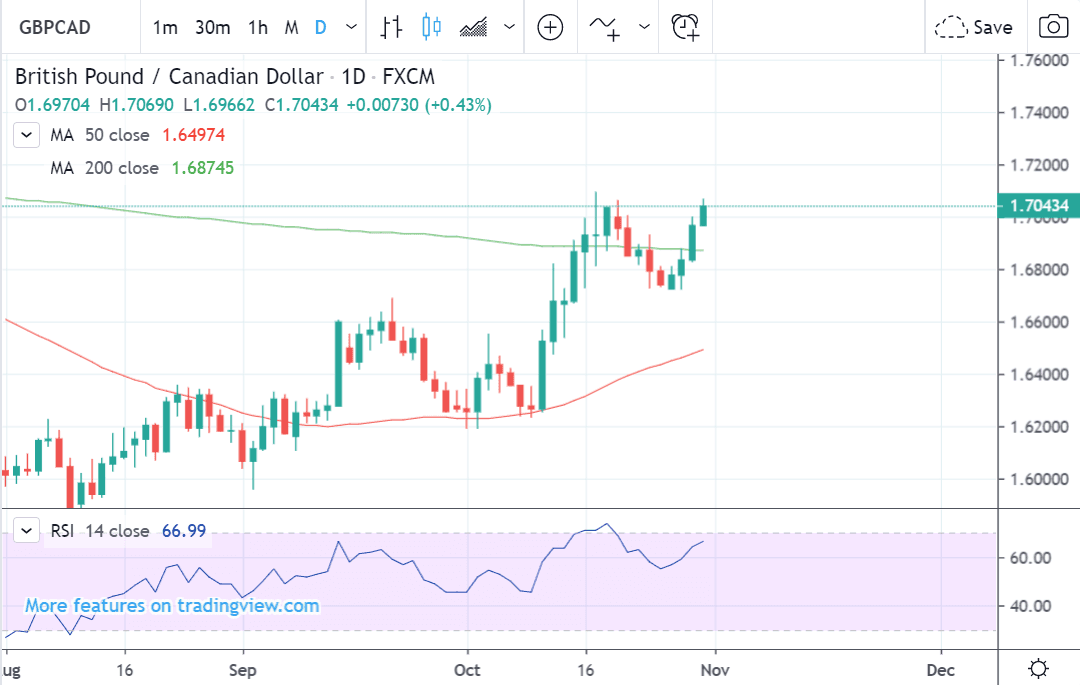 It had been expected the bank would leave policy unchanged for a good while yet and count the blessings of the Canadian economy which continues to outperform most developed peers; and whilst it did leave the overnight lending rate at 1.75%, it was surprisingly negative about the outlook for the economy - and this is what did the damage.

In its statement, concerns were highlighted on both the global and domestic fronts stemming from the global slowdown in trade and manufacturing.

It saw domestic growth slowing in the second half of this year as a result of a global slowdown caused by the uncertainty associated with worsening trade conflicts.

There was no acknowledgment that trade relations between the U.S. and China had improved or that the signing of the ‘Phase 1’ trade agreement between the two superpowers, widely expected to take place in mid-November, had changed the global outlook.

This prompted Nick Smyth, an analyst at BNZ Bank to say, "the BoC statement is a reminder that while financial markets have recently shifted towards a more optimistic view on US-China trade relations and global growth, central banks will be more cautious and slower to move.”

Move to Weaken the Canadian Dollar?

The surprisingly negative shift in stance by the Bank of Canada at their October policy meeting may have been a strategic attempt to weaken the Canadian Dollar, which has been one of the G10’s best-performing currencies this year, and some might argue has got too strong for its own good.

In their statement, the BoC said, "commodity prices have fallen amid concerns about global demand. Despite this, the Canada-U.S. exchange rate is still near its July level, and the Canadian Dollar has strengthened against other currencies."

Above: The Canadian Dollar has gained on all its major competitors in 2019

A strong CAD mixed with falling commodity prices is a negative combination for Canada’s economy. Its chief export is crude oil, so a stronger CAD, as well as a falling oil price, reduces revenue from that export and this might have swayed the BoC to adopting a more dovish stance.

Avery Shenfeld, chief economist at CIBC Capital Markets, says, "There was also a mention to the currency having appreciated against non-USD currencies, perhaps a sign that they are concerned about a further climb."

"The Canadian Dollar might look cheap to those with memories of parity, but for exporters, it’s not cheap at all," says Shenfeld. "That’s been evident in the country’s lacklustre trade performance, and digging into the details of sluggish exports, part of the story is that we need to pay more attention to the loonie’s value against currencies other than the U.S. Dollar." 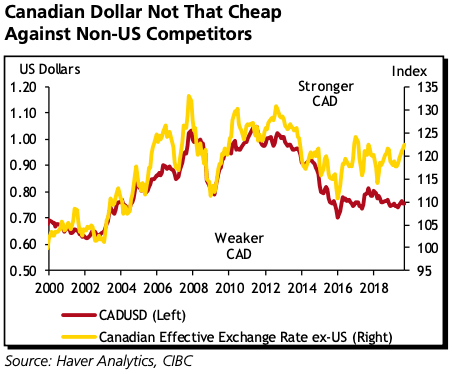 "A too-strong Canadian Dollar is playing into a weakening US market share for products bearing the maple leaf emblem. That sets the stage for the Bank of Canada to trim interest rates early next year to prevent a further Canadian dollar appreciation, and for the Canadian Dollar to weaken next year even as other majors regain some of what they’ve lost against the greenback," adds Shenfield.

Prior to Wednesday’s meeting, the market expectation had been that the BoC would firmly close the door on cutting interest rates. This was all the more the case after Justin Trudeau’s election win helped buoy market confidence, with increased certainty and continuity.

However, in the end, this was not the case and although the BoC did not overtly state that it is planning to cut interest rates at any time some analysts see a material risk they will, opting for a preemptive ‘insurance cut’ down the road.

As a result, BoC’s policy can now be described as ‘neutral’ leaving market participants somewhat confused about the future trajectory.

“Where does this leave us?” ssks TD Securities, a Canadian investment bank. “The Bank has maintained its optionality – the path to a rate cut is clear, and they’ve shared the map with markets, but they have not yet chosen to walk down it. Barring a marked improvement in the global backdrop, we expect Poloz to put on his walking shoes in early 2020.”

“Today’s dovish policy statement boosted market odds of a rate cut in the first half of 2020, and leaves us more comfortable with our call for a move early next year," says the economist.

But not all analysts expect a rate cut.

Analysts at Citibank - the world's largest dealer of currency - is of the view that the BoC will hold back on cutting interest rates due to the resilience of the domestic economy although they too acknowledge market expectations are now pricing in a further cut.

Citibank analysts think the BoC will be hesitant to ease policy in an environment of solid domestic data and at-target inflation.

"Note however that CAD short rates are now pricing almost 25bp of cuts through the end of 2020," says Citibank.

Of course, just because market expectations are calling for a rate cut that does not mean one will materialise, as has been amply proven in the U.S. where markets had been pricing in multiple interest rate cuts until recently when they eased back to a less dovish outlook due to resilience in the economy and better trade outlook.

The example of how markets have responded in America underscores both that market expectations are fallible and they are themselves dependent.

In the case of Canada the two main factors determining whether the BoC goes ahead and cuts rates in Canada as actually the same as in the U.S. - trade tensions and the impact of slowing manufacturing growth on the consumer.

The BoC itself noted the continued risk of contagion from the manufacturing slowdown to the consumer saying, “In considering the appropriate path for monetary policy, the Bank will be monitoring the extent to which the global slowdown spreads beyond manufacturing and investment. In this context, it will pay close attention to the sources of resilience in the Canadian economy – notably consumer spending and housing activity – as well as to fiscal policy developments.”