- GBP/CAD bounces off support on charts.

- Potential for more upside is on the horizon

The Pound-to-Canadian-Dollar rate is trading at around 1.6404 at the start of the new week after closing the previous one almost a full percentage point higher, but the exchange rate is biased toward a continuation higher in the days ahead.

The 4 hour chart - used to determine the short-term outlook, which includes the coming week or next 5 days - shows how the pair recently surged higher after bouncing off support, and the strength of the recovery is a sign it will probably continue.

Although the pair has pulled back from its peak in the 1.65s if it can recover and break back above the 1.6555 highs that will greenlight a continuation higher to a target at 1.6700.

The daily chart shows how the pair completed an ABCD pattern, then fell down to a support zone in the 1.62s before recovering higher over the last few days in what looks like a resumption of the short-term uptrend.

Given its fairly strong start so far, the uptrend is biased to continue, and a break above the 1.6554 highs would probably lead to a continuation up to a target at 1.6690. The daily chart is used to give us an indication of the outlook for the medium-term defined as the next week to a month ahead. 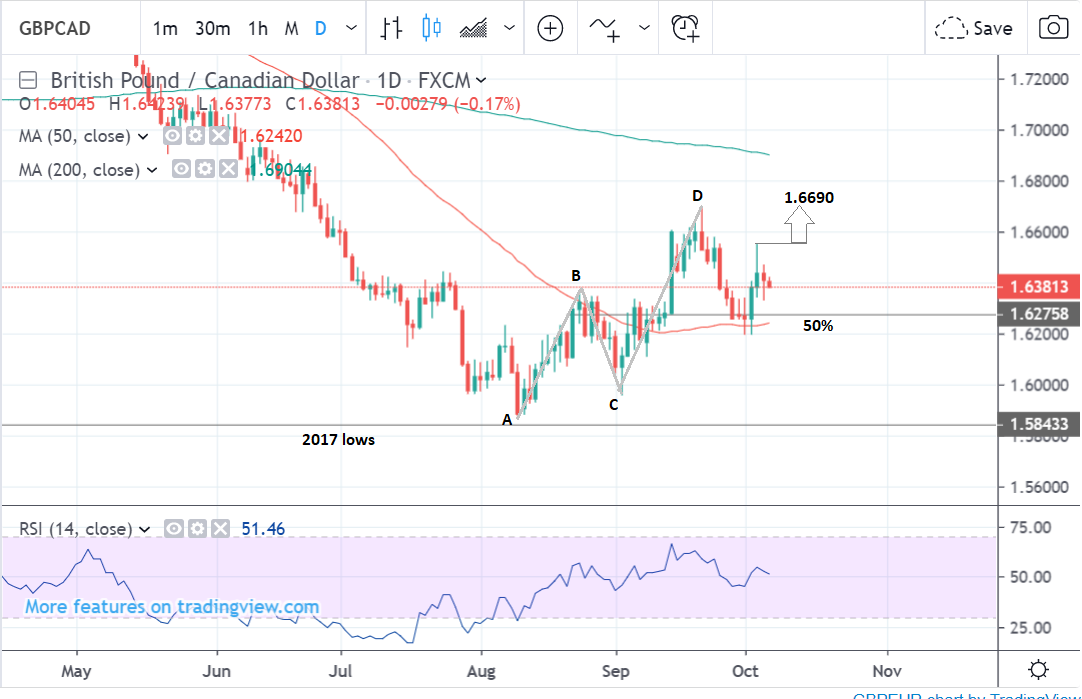 The weekly chart shows the pair bouncing up off the 2017 lows after completing a large bearish ABCD pattern. Given the bullish forecasts on the lower timeframe charts, we see the possibility of more upside on the horizon subject to a confirmatory break.

A break above the 1.6692 highs would provide confirmation of a continuation higher to a target at 1.6910. The weekly chart is used to give us an idea of the longer-term outlook, which includes the next few months. 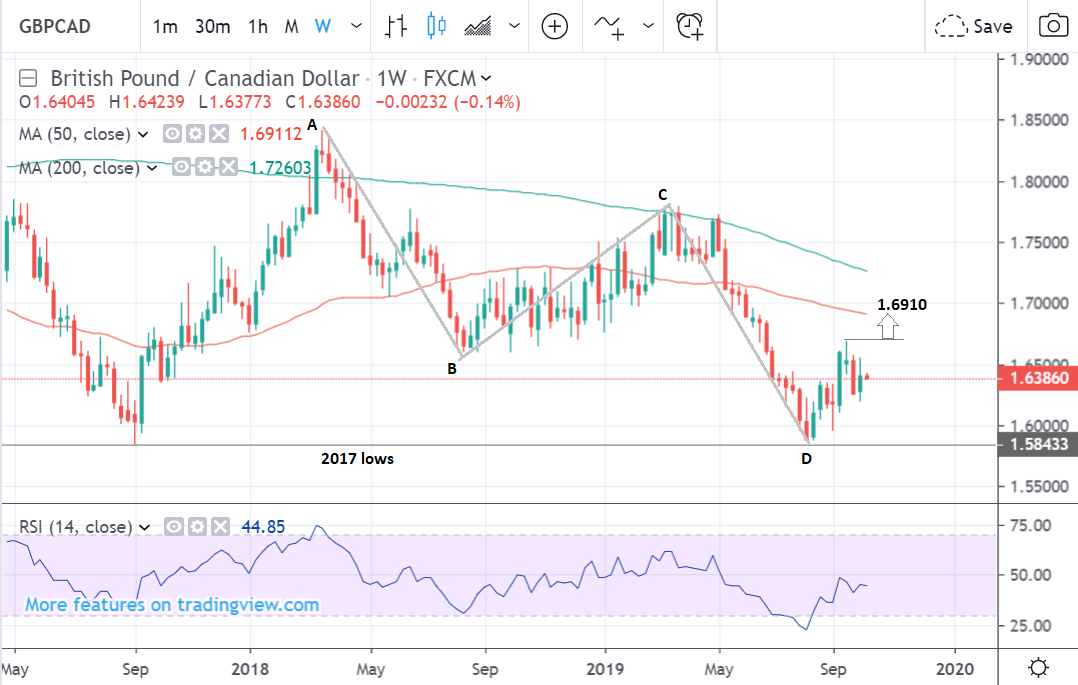 The main drivers of the Canadian Dollar in the coming week include employment data on Friday, which will provide a snapshot of the health of the economy, the price of oil, Canada’s largest export, and global risk trends.

Previous market optimism over the start of a new round of trade talks between the U.S. and China scheduled for Thursday may have been premature after reports the Chinese want to substantially narrow the scope of issues under discussion.

The Chinese delegation will not be open to discussing the following issues: state subsidies, intellectual property theft, and technology transfer. This excludes some key areas Trump will want to include in any negotiation of a comprehensive trade deal. It suggests less chance something positive will emerge.

If it looks like trade talks are leading nowhere then the Canadian Dollar could be at risk of falling on the news.

The U.S - China trade war has been a major factor weighing on global manufacturing growth which has contaminated Canadian manufacturing so a prolongation of the war will continue to weigh on the outlook for the country’s domestic economy too.

The success of trade talks may also impact on the price of oil and via that the Canadain Dollar since oil is the country's chief export. When oil prices rise aggregate demand for the Canadain Dollars to buy the oil rises, supporting the currency and vice versa when it falls.

After spiking sharply higher to above $70 per barrel following the drone attacks in Saudi the price of Brent crude oil has tumbled quite steeply to $58 at the time of writing due partly to a fall in global demand, which is now as low as it was during the financial crisis.

The fall in global demand is due to the slowdown in world manufacturing triggered by trade tensions. An increase in tensions will probably push oil down even lower, with a negative knock-on effect on the Canadian Dollar.

“Looking at the global economy weakening…China, the driver of global oil demand, experiencing the lowest economic growth since 30 years. The advanced economies are slowing down. We may well revise down our demand numbers in the next days or months to come,” says Fatih Birol the executive director of the IEA.

The OPEC monthly report out on Thursday and the OPEC meeting on Friday morning are two other key events for oil in the week ahead, since OPEC may announce further supply cuts to support oil prices.

Another key driver of the currency in the coming week could be Canadian employment data out on Friday. The data is forecast to show employment rise by 7.5k in the month of September and for the unemployment rate to remain unchanged at 5.7%.

The Pound-to-Canadian Dollar rate might receive a bid early in the new week but Brexit headwinds and the relative appeal of the Loonie could weigh on the exchange rate as the days draw on, leading to fresh losses for Sterling.