- CAD supported by oil but is tipped to weaken by year-end.

- Oil not high enough to keep CAD supported for much longer.

- Trade wars and weak global economy to catch up with CAD.

The Canadian Dollar is in the process of coming off the boil, according to analysts at Bank of America Merrill Lynch, who're sticking by forecasts that the Loonie will weaken against its U.S. and British rivals into year-end.

Canada's Dollar remained the best performing major currency of 2019 on Monday and may even be due one last leg higher before the music stops, particularly if concerns over Saudi Arabian oil production capacity persist. The September drone strike on a Saudi Aramco installation is still hampering production and could yet stoke fresh concerns about global supply, which would be a boon for the Loonie, but the international environment is not conducive to continued Canadian Dollar strength beyond the short term.

"Potentially prolonged disruption in Saudi crude oil production alongside likely-persistent geopolitical tensions in the area could mean higher global oil prices. While CAD would temporarily rise on direct price correlation and perceived terms-of-trade effects, adverse second order external demand and financial market responses seem likely to limit appreciation potential," says Ben Randol, a strategist at Bank of America. "While USD/CAD could initially trade lower to 1.30-1.31 - our estimate of medium-term fair value - on a possible spike higher in oil, we would buy that dip." 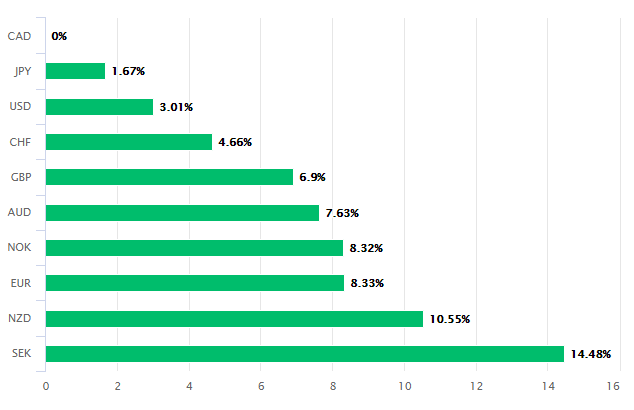 Tensions between the U.S. and China have been buffeting the global economy for nearly 18-months and after a brief September lull, could return with avengeance in October if talks between the two countries fail to produce an agreement that addresses U.S. concerns over China's alleged unfair trade practices. Tensions could also rise if President Donald Trump goes ahead with the latest measures that he's reported to be considering.

Bloomberg News reported Friday that Trump is considering limiting some American investment flows to China, which would be an aggressive step that marks yet another escalation in the trade spat. The two sides are set to hold talks in Washington on October 10 and 11 but if an agreement ist reached, the White House could lift the tariff rate imposed on around $250 bn of China's annual exports to the U.S. from 25% to 30%. Further tariffs are also scheduled to go into effect on December 15.

"At such levels, absence of CAD risk premium seems conspicuously misplaced given persistent global uncertainties. For a sustained move lower in USD/CAD, a benign external environment is required," Randol says, referring to the gap between the 1.30 and 1.31 handles in USD/CAD. "Asset managers have been long CAD over the last two years but cutting positions. Overall, we see liquidation risk as a potential contributor to USD/CAD appreciation ahead." 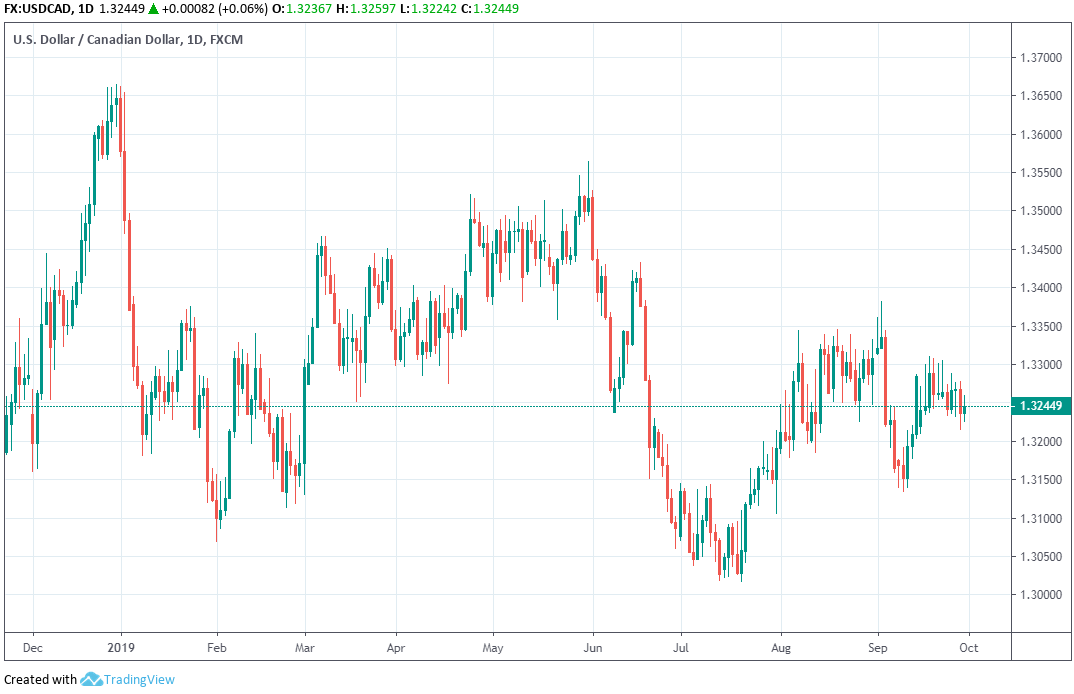 Randol says that if the USD/CAD rate does fall back toward 1.30 over the coming weeks, it will be trading at a level that requires buyers to pay for every last cent of value locked up inside the Loonie. In other words, it will be trading at 'fair value' and won't offer investors any kind of 'risk premium' that they may want as compensation for holding the currency through another escalation of trade tensions or a possible run of bad Canadian economic numbers.

Without a so-called risk premium, which is in other words a discount, then investors might sell the Canadian Dollars they already own if either the international or domestic economic pictures sours in the weeks ahead. 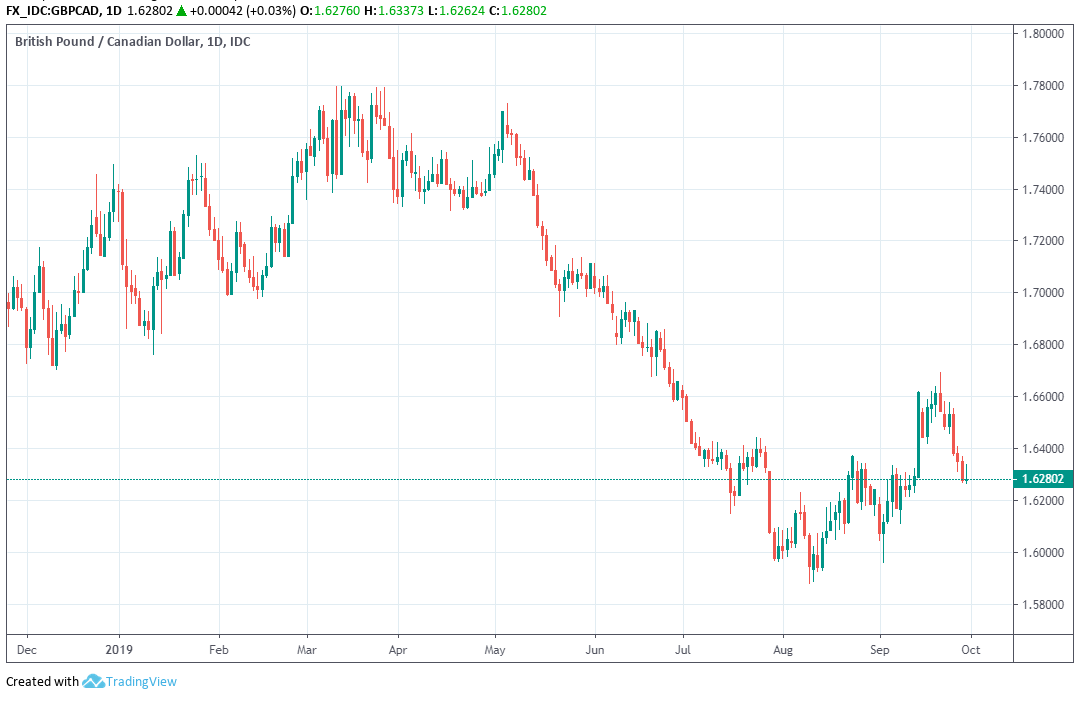 One of the most significant drivers of Canadian Dollar strength in recent months has been outperformance by the domestic economy, which has enabled the Bank of Canada (BoC) to leave its interest rate unchanged at 1.75% even as the Federal Reserve (Fed) has reversed course and begun to cut U.S. borrowing costs for companies and households. The Fed has cut the Fed Funds rate twice this year, taking it down to 2%, and is expected to cut again in December.

The BoC's reluctance to follow the Fed has left Canada with an interest rates that is one of the highest in the developed world. At 1.75%, the BoC cash rate is even higher than the 1.5% rate offered by Norway's Norges Bank, which has raised rates four times in the last year. And it could soon be on a par with that of the Federal Reserve. That BoC cash rate has acted like a magnet for yield hungry investors in recent months.

"The market is pricing a magnitude of relative Fed-BoC policy rate easing justifiable only with WTI at $80/bbl in a benign external environment. Our internal forecasts for the Fed and BoC point to only modest USD/CAD upside as the exchange rate has (correctly, in our view) already decoupled from rate differentials," Randol says. 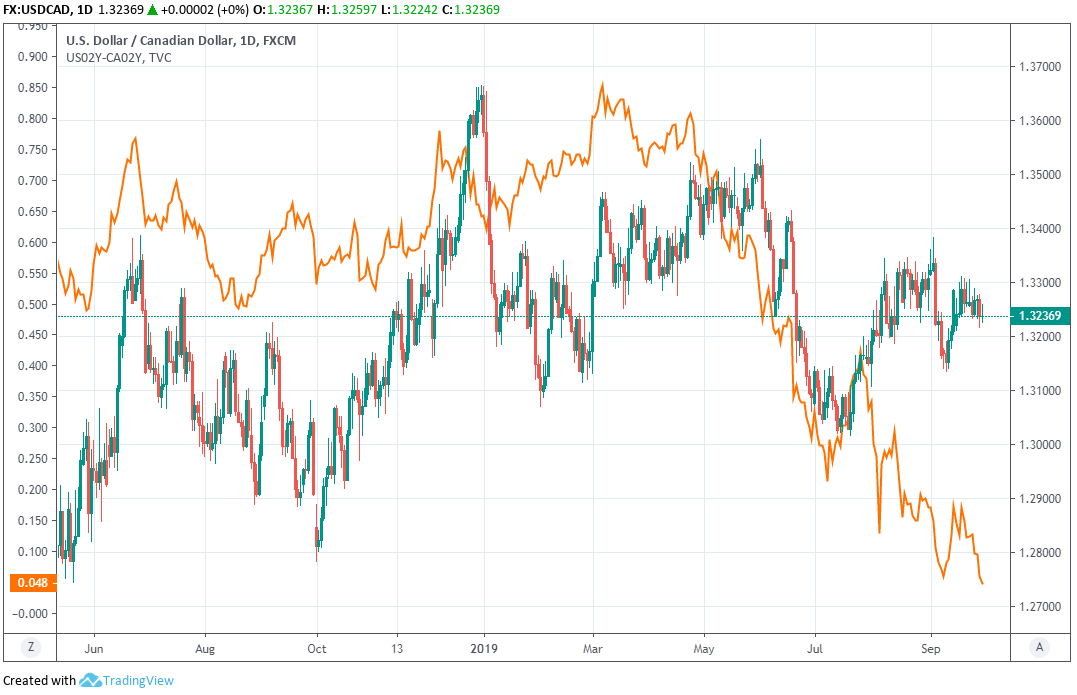 Bank of America says the market is right to have recently stopped chasing the differential between interest rates in Canada and other parts of the world. The rate differential has until played a significant role in the Loonie's outperformance, buit could easily turn against the Canadian currency in the months ahead if either the U.S. Fed does not cut again in December or if the BoC hints to investors this month that it too could soon follow in the Fed's footsteps.

For its part, the BoC has said repeatedly that it will be guided by developments in the trade war as well as their impact on the outlook for Canadian growth and inflation. The Fed has also cited weakness in the global economy for its own rate cuts, fearing the slower global growth will soon lead to a weaker expansion at home, and markets are betting heavily that it'll cut as many as three more times in the next 12 months. But it's October 2020 before those same markets fully anticipate an initial BoC cut.

Randol says that divergence is unsustainable and forecasts the USD/CAD rate will rise from 1.3290 Monday to 1.35 before year-end. The Pound-to-Canadian-Dollar rate is tipped to rise from 1.62 to 1.79 before the curtain closes on 2019, although the Sterling forecast has more to do with the bank's Brexit view than it does any anticipated weakness in Canadian exchange rates.