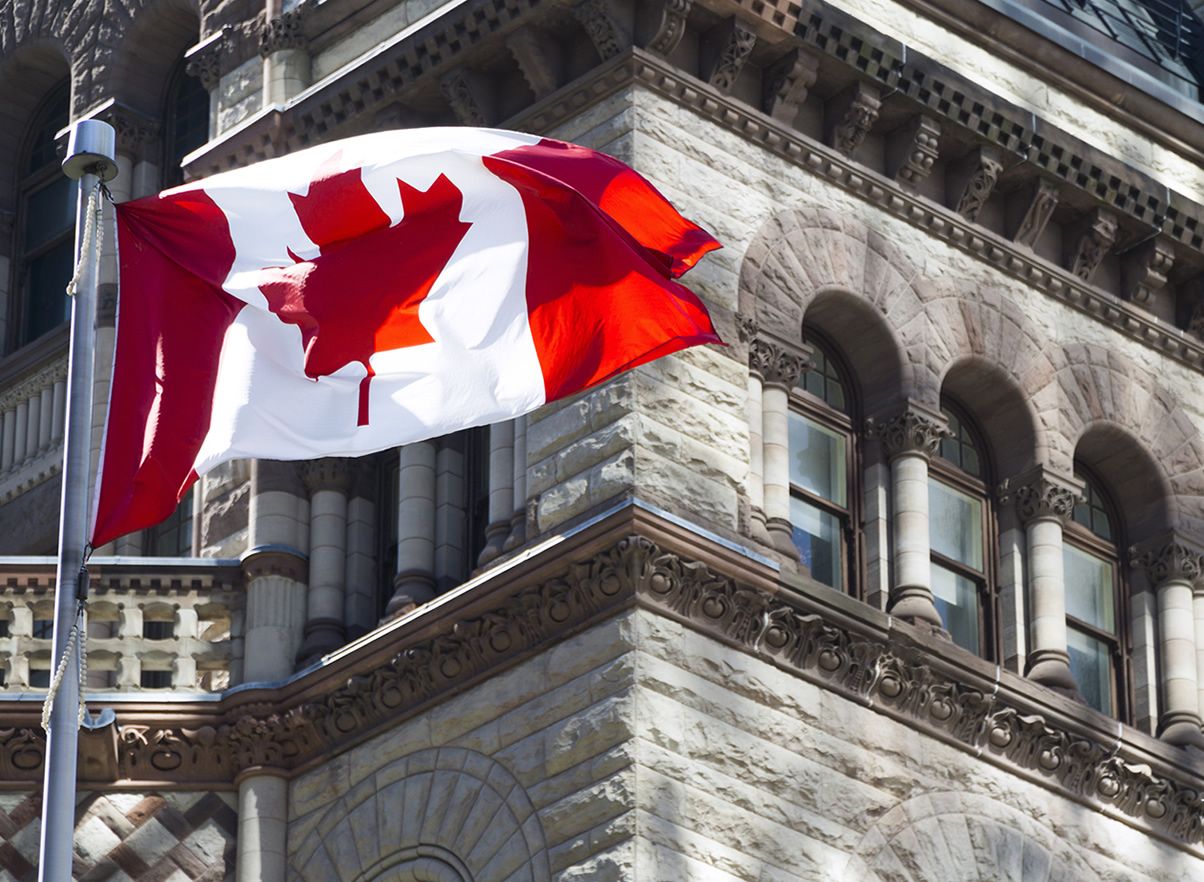 - Annual inflation seen down at 1.9% as core measures hug 2% level.

The Canadian Dollar posted a mixed performance Tuesday, softening against the greenback but gaining over Sterling, as markets responded to inflation figures for the month of August but multiple analysts are tipping the Loonie to remain firm against rivals for a while yet.

Canadian inflation fell by 0.1% in August, dragging the annualised figure down from 2% to 1.9%, although the latter move was in line with market expectations. Meanwhile, the BoC's three alternative measures of 'core' inflation continued to average the 2% target in August, even though 'common CPI' surprised on the downside when it fell from 1.9% to 1.8%.

"The surprise came from airline fares which, against projections, rose again in August. That sub-category has been through a methodological change which has caused increased volatility. As a result, we expect the past two months' increases to be reversed when September's data are released. Overall, not a lot of implications for Bank of Canada policy, particularly with the average of the three core inflation measures still tracking 2%," says Royce Mendes, an economist at CIBC Capital Markets.

Statistics Canada said Wenesday that Canadian inflation has remained at or above 1.9% for six consecutive months, before drawing attention to concurrent strength in "labour market conditions". It says inflation would have been 2.4% in August if not for declines in gasoline prices, although oil prices have surged by double-digits in September, which could send inflation higher later this year.

"Headline inflation crept lower over the last three months as consumers got a break on gasoline prices over the summer. Meanwhile, underlying inflation continues to hum along at 2%, making the Bank of Canada the envy of its global peers. With the Fed set to lower borrowing costs again today (and potentially leave the door open to another cut) the BoC might just end the year with the highest policy rate in the G7. Inflation would be a key reason for that," says Josh Nye, an economist at RBC Capital Markets. 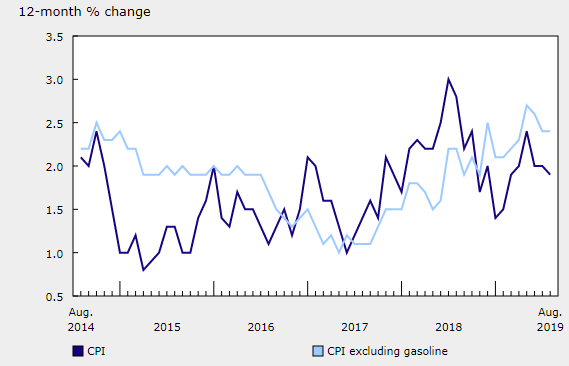 Inflation spiked back in July, helping to keep the consumer price index at the 2% target of the Bank of Canada and vindicating policymakers for so-far having signalled that Canadian interest rates will remain unchanged for the foreseaable future in order to keep a lid on price pressures.

Many other developed world central banks have cut interest rates in recent months in an effort to protect their economies from a global growth slowdown but resilient inflation and economic outperformance from Canada is preventing the BoC from following suit.

"August CPI numbers should underpin the positive sentiment on CAD by signalling that inflation remains anchored around the BoC target mid-point (2.0%). However, we continue to see a high chance of the BoC cutting rates in October on the back of rising trade tensions," says Chris Turner, head of FX strategy at ING. "The spike in oil prices has averted a break above 1.33 in USD/CAD at the start of this week, and may continue to prove broadly supportive for the CAD in the short term."

Markets care about inflation data because it dictates central bank interest rate policies, and the relative rate outlook is what drives the capital flows that govern movements in exchange rates. Above-target inflation, and signs that price pressures are building from any level, often see markets speculate about the odds of future rate rises. And capital flows tend to move in the direction of the most advantageous or improving returns, with a threat of higher rates normally seeing investors drawn toward a currency. 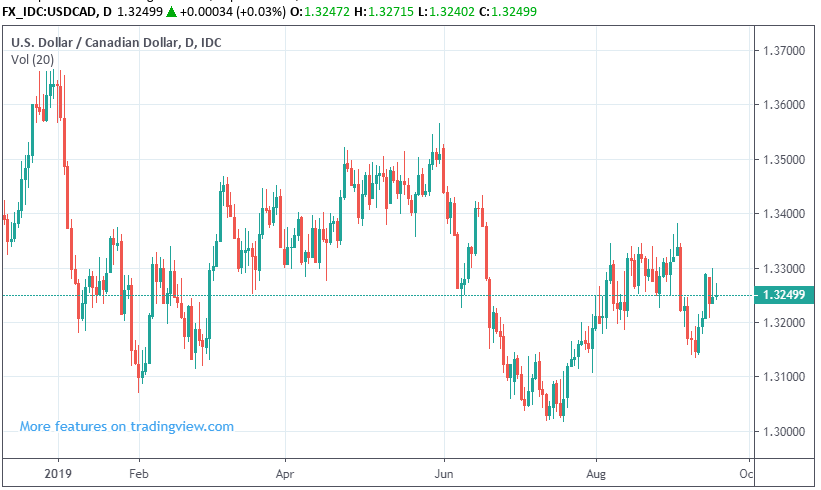 The Bank of Canada has left its interest rate unchanged at 1.75% all year despite that central banks in the U.S., Europe, Australia and New Zealand have all cut them in order to underwrite their economies against the disinflationary forces stirred by the ongoing global economic slowdown, which has itself been brought on by repeated escalations of the U.S.-China trade war. The BoC has hinted that developments in that trade war will be the most important influence on its future policy decisions.

"The BoC is likely to move away from its neutral stance in the near future," says Antje Praefcke, an analyst at Commerzbank."This would probably be a preemptive step to cushion the potential downside risks to the economy that could result from the trade conflict. However, as the BoC remained neutral for the time being in September, it is unlikely that it will lower the key interest rate in autumn. We now expect the first cut at the end of this year/at the beginning of next year (forecast change). The Canadian dollar is nonetheless likely to appreciate against the US dollar, as the Fed is the more “active” central bank that will cut interest rates earlier and more quickly."

The BoC said earlier in September that Canadian growth will likely slow in the second half of the year but tied forthcoming interest rate decisions to developments in the U.S.-China trade war, which has enabled it to avoid precommitting to any one particular policy path as the tariff fight between the world's two largest economies ebbs and flows. Talks scheduled for October are offering hope of at least a temporary truce between the two sides but earlier ceasefires have repeatedly broken down.

Nonetheless, Canada's resilience to the global slowdown has enabled the BoC to stand apart from the crowd as other central banks rush to cut rates, which has helped make the Loonie the best performing major currency of 2019. And with rats on hold at least until October, if not even later, analysts are tipping the Loonie to continue getting the better of most rivals. Commerzbank forecasts the USD/CAD rate will fall to 1.30 by year-end. 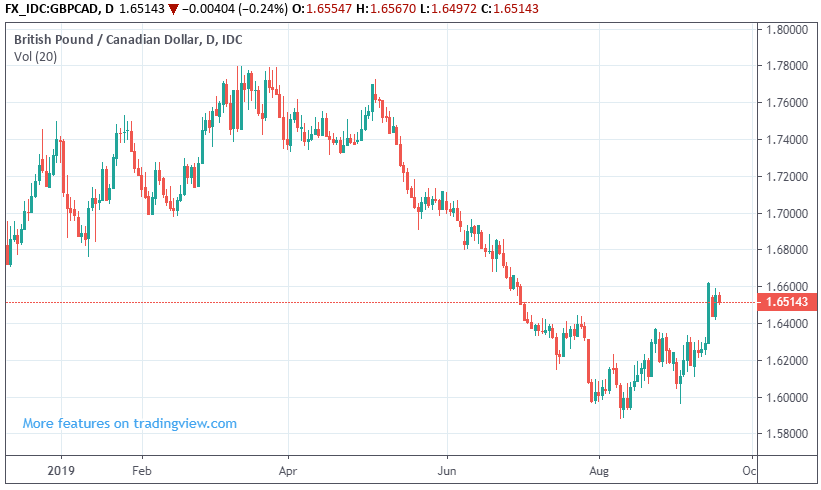 "We think the USD rebound last week failed to put the bearish weekly reversal signal from the prior week under pressure and we note that while intraday trend signals are tilting more supportively towards the USD, daily and weekly trend oscillators are flat or bearish leaning. We do not exclude a near term retest of the 1.33 area but we still rather think the scope for significant USD gains is limited at present," says Eric Theoret, a technical strategist at Scotiabank.

The USD/CAD rate was 0.05% higher at 1.3248 following the inflation report Wednesday, down a touch from ahead of the release, but is down 2.5% for 2019. Meanwhile, the Brexit-blighted Pound-to-Canadian-Dollar rate was 0.27% lower at 1.6508 and has fallen 5.14% for 2019. Scotiabank's Theoret says the charts are suggesting Sterling may have formed a major "low" or 'bottom', which could mean the worst of its losses are now behind the British currency.

"GBPCAD gains extended to the 1.66 area late last week—the lower end of the range we thought was achievable for the GBP above resistance in the upper 1.63s. The jury remains out on the case for a broader basing/reversal in the GBP at the moment, we think, but the longer run charts are starting to build towards a more obvious low signal (Sep may be building the third leg of a monthly “morning star” signal)," Theoret writes, in a briefing to clients on Monday. "We expect good support on weakness to the mid/upper 1.63 area from here. Resistance remains 1.6600."