The Canadian Dollar soared against the Dollar and Brexit-battered Pound Wednesday after official data revealed a surprise surge in inflation for the month of July, which might further constrain the Bank of Canada (BoC) ahead of any eventual decision to cut its interest rate.

Canadian inflation rose 0.5% in July when the consensus was for a much lesser 0.1% increase, which was enough to ensure the annual rate of inflation remained steady at the Bank of Canada's 2% target. Markets had expected the annualised rate would fall in July.

The three measures of core inflation preferred by the BoC also continued to average the 2% target in July, after 'common CPI' and the 'trimmed mean' measure surprised on the upside. Markets had looked for the average of the three to slip back beneath the target during the recent month, to 1.9%. Canada's core inflation measures are thought to better represent underlying trends in domestic price pressures.

"Consumers prices blasted ahead in July, easily sailing past even our above-consensus expectation.," says Royce Mendes at CIBC Capital markets. "That said, there could be some weakness in prices in the months to come as the airline and travel tours categories reverse these gains, and gasoline costs fall." 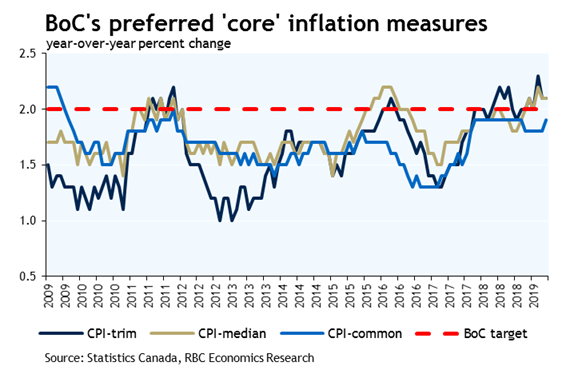 "The odds of the Bank of Canada following the US Fed and other global peers with lower interest rates have increased as the US-led trade war with China has intensified – with risks if anything tilted to an earlier move than the 25 basis point cut in early 2020 we have penciled in.  Nonetheless, near-term price and economic growth trends still look too strong for the BoC to justify a rate cut immediately, and that hasn’t changed with today’s inflation report," says Nathan Janzen at RBC Capital Markets.

Markets care about inflation data because it's the outlook for consumer prices that dictates central bank interest rate policies, and the relative rate outlook is what drives the capital flows governing exchange rates movements. Above-target inflation, and signs that price pressures are building from any level, often see markets speculate about the odds of future interest rate rises.

"For today, Canadian bond yields should rise and the Canadian dollar will likely trade stronger, but overall the report shouldn't do much to alter thinking at the Bank of Canada as many of the moves seem likely to reverse," Mendes says, in a note to clients following the release. 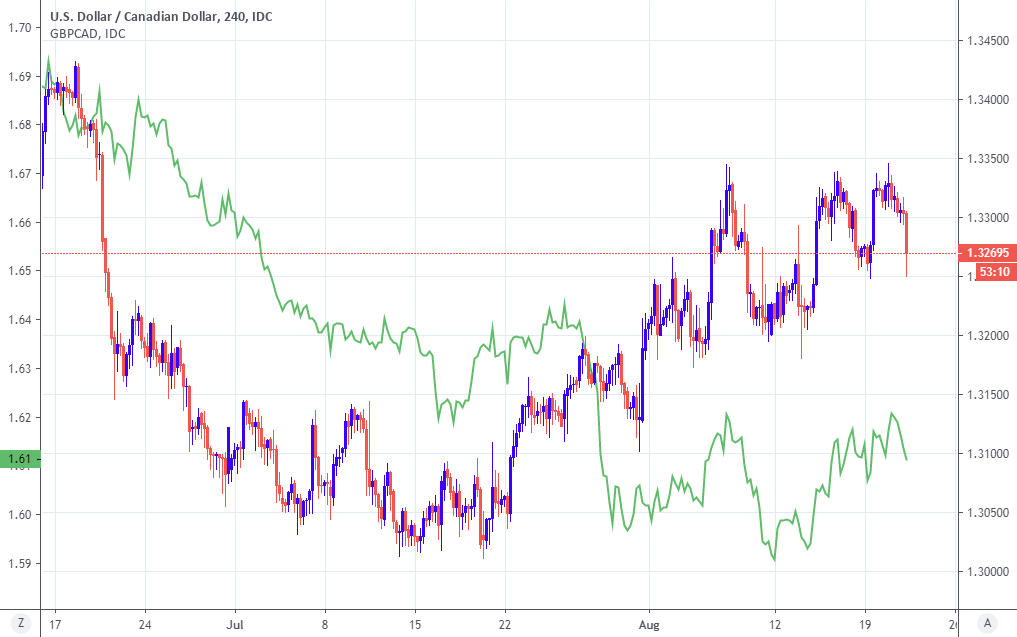 The Canadian Dollar may have got the better of its U.S. and British rivals Wednesday but it's increasingly falling from grace among investors and analysts, with three more firms tipping the Loonie for losses up ahead this week. The Canadian Dollar was the best performing G10 currency for 2019 until early August, when it ceded that position to the safe-haven Japanese Yen.

"We have made upward revisions to our USD/CAD forecasts. We now project USD/CAD to trade closer to 1.3500 by year‑end instead of 1.3000 because of rising downside risks to global growth, a lower Bank of Canada (BoC) policy interest rates, and a stronger‑for‑longer USD," says Richard Grace, head of FX strategy at Commonwealth Bank of Australia.

Canada's Loonie, through its sensitivity to oil prices, is among the most exposed to an international environment that has turned sour again in the last month. The oil market and expectations for the global economy this year have already taken a knock as a result, but the Canadian Dollar is yet to respond in kind. Analysts at Nordea Markets say it's only a matter of time before it does.

"CAD is maybe not among the absolute worst performers after a curve inversion, but we still see a more than decent dovish re-pricing scope for BoC. It seems as if BoC is narrowly focusing (some would call them obsessed) on the trade war (who isn’t?), and the latest marked shift in rhetoric came just after Trumps escalation in May," says Martin Enlund, a strategist at Nordea Markets. 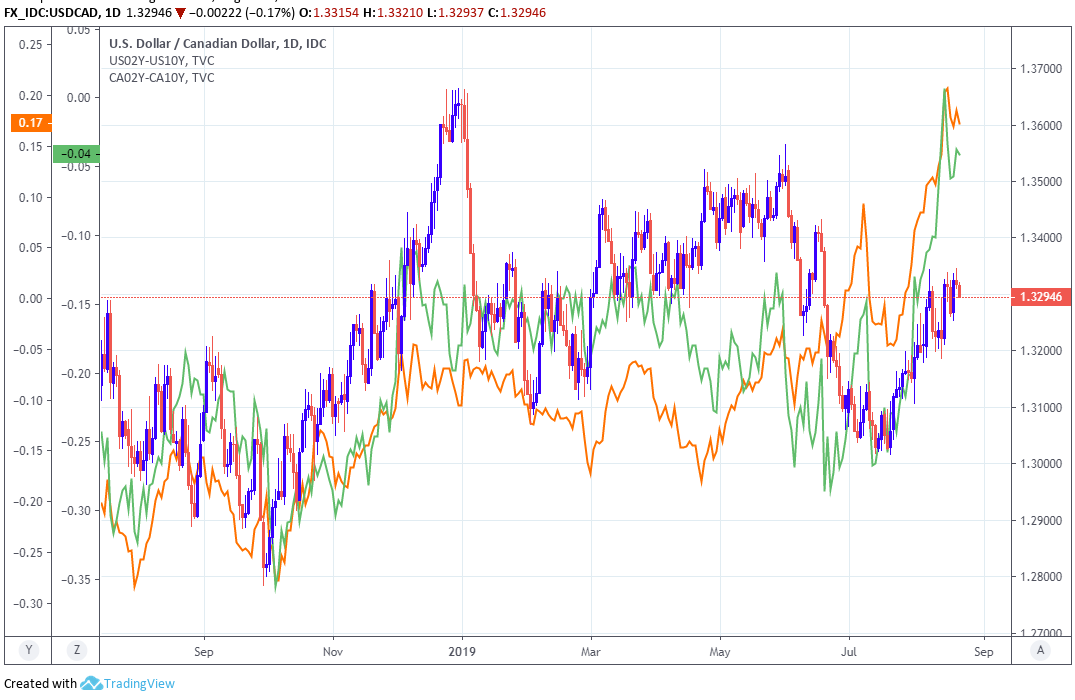 Above: USD/CAD and 'spread' between 2-year and 10 year yields for U.S. (green) and Canada (orange)

Enlund and the Nordea team tipped the Canadian Dollar for a turn lower this week after U.S., Canadian and UK yield curves, which represent the cost of borrowing for governments over periods spanning one month to 30 years, inverted to become downward sloping last week.

This saw 10-year bond yields fall below those on comparable two-year paper, which is a rare occurrence in financial markets because lending over long periods is normally perceived as more risky than doing so over short timeframes. The U.S. curve inversion was quickly reversed but Canada's yield curve has remained inverted, with two-year local bonds offering 0.17% more yield than their 10-year counterparts on Wednesday.

Yield curve inversions are viewed by the markets are harbingers of recessions and although various curves have inverted for long periods previously without portending economic contraction, they have also accurately predicted all of the nine most recent U.S. recessions. August's inversions came as markets wait with bated breath for the next escalation in the U.S.-China trade war.

"Could the latest 10% threat be just what Poloz and co needed as an excuse to take another dovish shift in early September? We think so. The Canadian yield curve inversion is much worse than the US ditto, so cuts are needed (ASAP!)," Enlund writes, in a weekly currency briefing. "The CAD has so far weathered the trade/cold war storm decently as USDCAD has had a negative 100-day correlation to USD/CNY. Don’t expect that negative correlation to persist. Canada is (also) very China dependent." 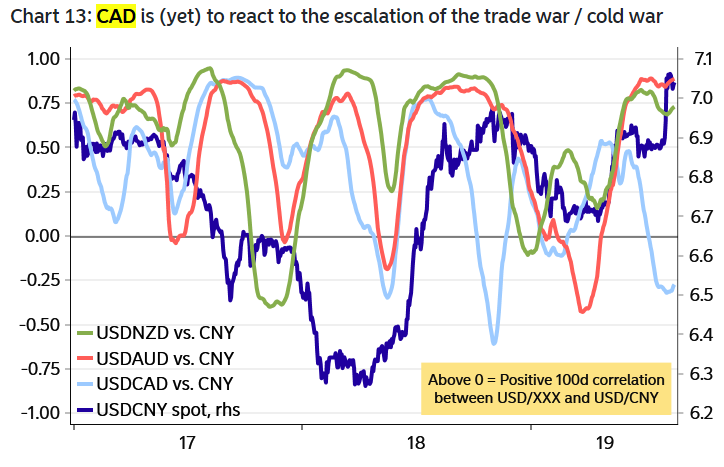 Above: Nordea Graph showing response of commodity currencies to weakness in China.

Yield curves have inverted and fears for the global economy risen ever since President Donald Trump said he intends to impose a 10% tariff on all of China's exports to the U.S. that are not yet covered by levies.

Some tariffs are scheduled to go into effect on September 01 and the rest on December 15, which will mean substantially all of China's trade with the U.S. is encumbered by one tariff or another.

The ongoing trade fight has hurt the global economy, particularly the Eurozone, and even President Donald Trump has resorted to pressuring the Federal Reserve (Fed) to cut its interest rate. But Canada's economy has continued to outperform its developed world peers in recent months and the Loonie is yet to respond in a meaningful way to the latest escalation of the trade conflict, even if it has weakened a touch since the local yield curve first inverted.

Doing great with China and other Trade Deals. The only problem we have is Jay Powell and the Fed. He’s like a golfer who can’t putt, has no touch. Big U.S. growth if he does the right thing, BIG CUT - but don’t count on him! So far he has called it wrong, and only let us down....

"Somehow, the market thinks there are only 18% odds that we see a larger than 25 basis point cut through the September 18 FOMC meeting. If the USD breaks higher here and holds, this should quickly be adjusted to 50 and raises the risk of a between-meeting cut," says John Hardy, chief FX strategist at Saxo Bank. "The Fed will have to deliver and deliver big to turn around the momentum developing in the US dollar - is Powell ready to hint that the Fed will submit to the forces that will eventually force the Fed’s hand anyway (cut to zero and massive QE) or will he continue to dither? The stakes Friday are high."

Risks stemming from the trade war and ongoing slowdown in the global economy have persuaded the Fed to cut its interest rate once already, to 2.25%, but both President Trump and the markets have been calling for more. And analysts have long suspected the Bank of Canada would also cut its 1.75% cash rate if U.S. rates fall below 2%, even if the economy remains in rude health.

Federal Reserve Chairman Jerome Powell will deliver a speech titled "Challenges for Monetary Policy" during the opening of the Jackson Hole Symposium at 15:00 Friday, where he is also expected to update markets on what recent developments in the trade war and economy could mean for interest rate policy up ahead. Anything short of a strong signal that significant interest rate reductions are imminent would risk strengthening the U.S. Dollar. 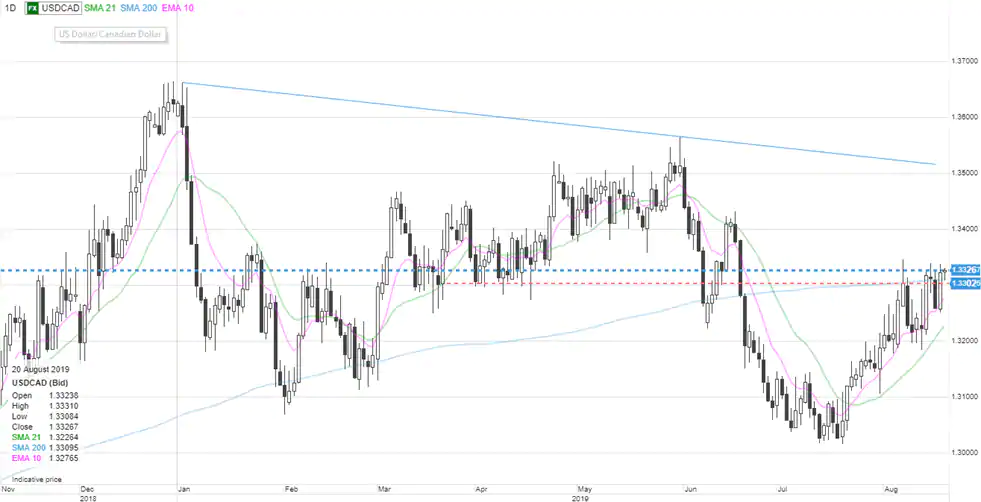 Financial markets are already pricing in one BoC rate cut before year-end, but it's not only expectations of the canadian central bank that important to exchange rates. Fed policy is also key for USD/CAD and markets have already priced-in a further three full cuts in the U.S. before year-end, although many analysts say there's a risk that some of those reductions won't be delivered.

If the Fed disappoints markets with the number of rate cuts it delivers later this year but the BoC goes ahead then the U.S. Dollar, which is still backed by the highest cash rate in the developed world, could become even more attractive than it is currently to investors. That would be bad news for the USD/CAD rate, which is being tipped to rise by both Saxo Bank and Nordea Markets.

"USDCAD is backing knocking on the key resistance above the 200-day moving average and around recent highs," Saxo's Hardy says. "A close above the resistance here with a backdrop of USD strength could quickly see the pair poking to the top of the range above 1.3500. Note the descending trendline." 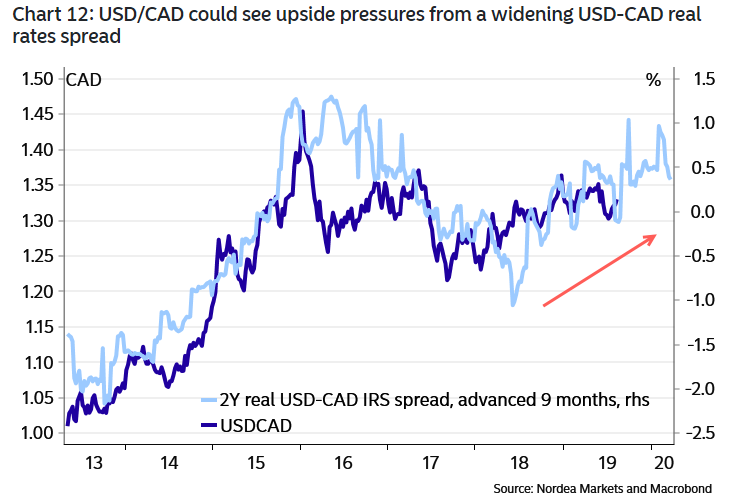 The Pound-to-Canadian Dollar rate reversed course and traded higher Tuesday after Statistics Canada indicated that only a tepid economic recovery was underway in May, after reporting historic losses for the economy in April.

The Pound-to-Canadian Dollar exchange rate entered the new week on the front foot Monday but will be tested over the coming days and could struggle to hold its newly recovered ground as the week draws on.