- As strong Canadian economy puts BoC in a bind and Fed starts cutting.

- USD/CAD seen back at 2018 lows as GBP/CAD rate blighted by Brexit.

The Canadian Dollar is on course to return to its 2018 highs against the U.S. Dollar and will keep Pound Sterling on its back foot into year-end, according to the latest forecasts from MUFG, which imply the Loonie will retain its crown as the best performing G10 currency of 2019.

MUFG, the world's fifth largest bank and a significant foreign exchange dealer, upgraded its Canadian Dollar forecasts at the beginning of July with significant consequences for the USD/CAD and Pound-to-Canadian-Dollar outlooks.

The bank says domestic economic fundamentals and the current condition of rival currencies' economies mean the Loonie is best positioned to keep leading the G10 riposte to a U.S. Dollar that had until recently dominated currency markets for the best part of 18 months.

"Nymex crude oil closed 9% higher in June. But perhaps more importantly for CAD has been the flow of economic data that points to resilience of the Canadian economy," says Derek Halpenny, MUFG's European head of research,  in the bank's latest review of its exchange rate forecasts. 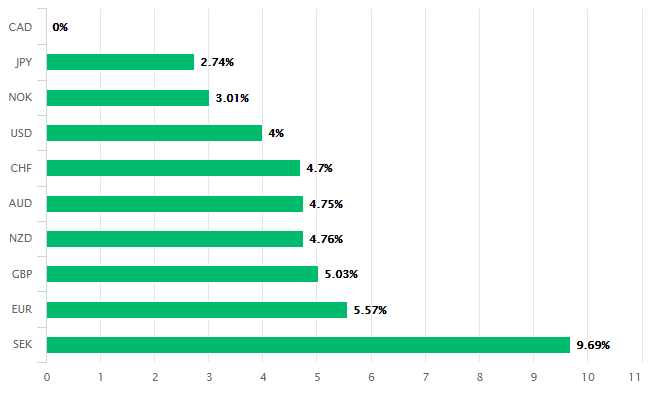 Canadian GDP data for the month of April surprised on the upside last Friday, with the economy having grown 0.3% during the period when markets were looking for an expansion of just 0.2%. That pushed the three-month growth rate up from 0.1% to 0.3%.

Friday's growth data came barely more than a week after other data showed the main Canadian inflation rate surging from 2% to 2.4% in May, while all of the core inflation measures preferred by the Bank of Canada (BoC) averaged 2.1% that month, which is above the 2% target for the first time since February 2012.

In addition, and previously, other figures had shown the economy continuing to create jobs at a rapid clip and the unemployment rate falling to a new record low during the month of May, which could mean faster wage growth and higher inflation is ahead further down the track.

"The OIS curves in Canada and the US are notably different with far less easing implied in Canada. Only around 15bps of cuts are currently priced in Canada’s OIS curve implying a marked narrowing of spreads with the US. The 2-year US-CA swap spread has narrowed back to levels last seen in September 2017 when USD/CAD was well below the 1.3000 level," Halpenny says. 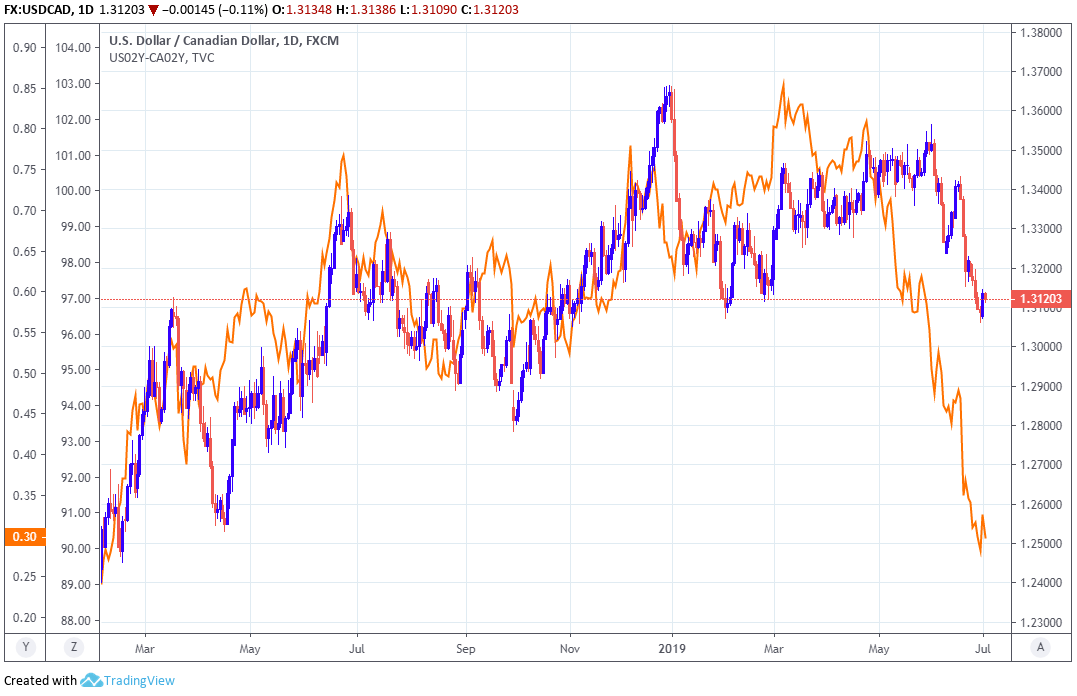 When combined the economic figures released in Canada through June have put the Bank of Canada in a tight spot because Canadian policymakers have tended in the past to prefer following the lead of the Federal Reserve, which is widely expected to begin cutting U.S. interest rates this month.

However, and unfortunately for the BoC, the apparent strength of the Canadian economy could now make it difficult for the bank to justify cutting its own interest rate over the coming quarters. It could certainly minimise the extent to which the BoC cuts if it does go ahead and do so.

Over the course of June the market-implied BoC cash rate for December 04, 2019 has risen from 1.56% to 1.64%, which suggests that investors have now become much less sure of their earlier bets the bank would cut its interest rate from 1.75% to 1.5% before year-end.

This change took place as investors began to bet increasingly heavily the Fed would cut its own rate multiple times this year, which explains why U.S. bond yields are no longer as high as they previously were relative to their Canadian counterparts. That in particular explains a large chunk of the Loonie's strong June performance.

"Nearly all the CPI measures reported were stronger than expected, which has reinforced expectations that the BoC will not be as active as the Fed cutting rates," Halpenny says. "We expect a lower USD/CAD rate but given our assumption of three rate cuts by the FOMC, the CAD OIS curve is under-priced for BoC cuts which will limit the extent of CAD appreciation ahead." 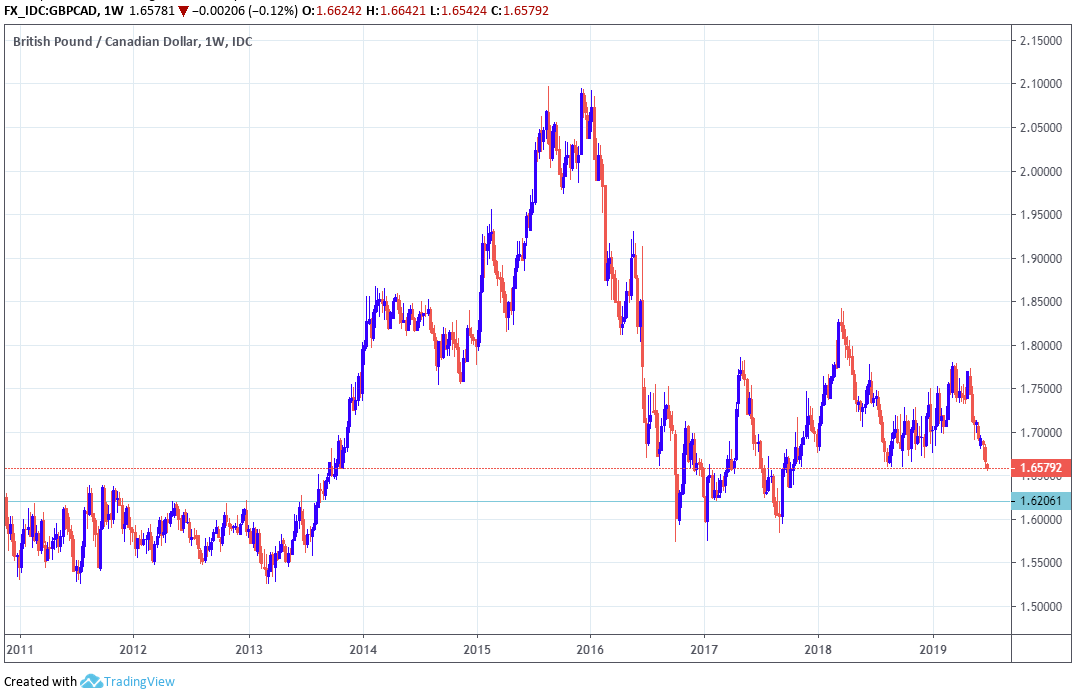 Halpenny and the MUFG team forecast two Fed rate cuts in the second half of 2019 and another in early 2020, which are likely to weigh on the USD/CAD rate. They forecast the exchange rate will fall to 1.30 over the coming months and remain close to that level until year-end.

That's a Canadian Dollar upgrade from an earlier USD/CAD forecast of 1.33 for year-end, although the exchange rate is expected to fall even further once into 2020, to 1.29 before the end of March and 1.28 by the end of June.

Meanwhile, the Pound-to-Canadian-Dollar rate is expected to fall from 1.65 Tuesday to 1.61 by the end of September before recovering to only 1.65 in time for year-end. This forecast owes itself to both Canadian Dollar strength as well as political uncertainty in the UK that is weighing on Sterling.

"We continue to think a 2nd referendum is the most likely course of action with a delay in Brexit possibly until around the middle of 2020 to allow time for a vote. But we stress our conviction on this outcome is not particularly high and falling. So our GBP forecast profile remains the same – depreciation over the coming months as market participants increasingly price in the prospect of no deal," Halpenny says.