- U.S.-Mexico tariff decision incoming over weekend, amid hopes of a deal.

The Canadian Dollar extended its riposte against the U.S. Dollar and many of its G10 rivals Friday after jobs numbers for the month of May surprised on the upside for a second month running, suggesting earlier market pessimism on the Loonie's prospects may have been misplaced.

Canada's economy created 27.5k new jobs in May when markets looked for only a 5k gain, which was enough to push the unemployment rate down by 30 basis points to 5.4%, a record low, when consensus was for a steady 5.7%.

With the unemployment fall and May jobs gains aside, the most striking feature of the report was that April's show-stopping 106.5k increase in employment was confirmed when it was left unrevised on Friday.

"The Canadian labour market is in the midst of an impressive run of job creation. Following a surge in hiring in April, employment again rose more than the consensus had been predicting. The details were by no means immaculate, but the release does continue the string of better-than-expected headline readings on the Canadian economy," says Avery Shenfeld at CIBC Capital Markets.

Markets care about the labour market data because falling unemployment and improving job creation are thought to put upward pressure on wages. Pay growth leads to increased demand in an economy and puts upward pressure on inflation, with implications for interest rates and financial markets.

"[Employment] has now increased 453K over the past year. That’s the largest 12-month increase in jobs since 2003, outstripping even 2017, when GDP growth was running at a hot 3% pace," Shenfeld writes, in a note to clients.

Canada's Dollar rose from near the bottom of the G10 league table to around the midpoint of it in response to the figures the on Friday. The data could convince the Bank of Canada (BoC) the economy is weathering the current storm of global "trade tensions" just fine this far in the second quarter. 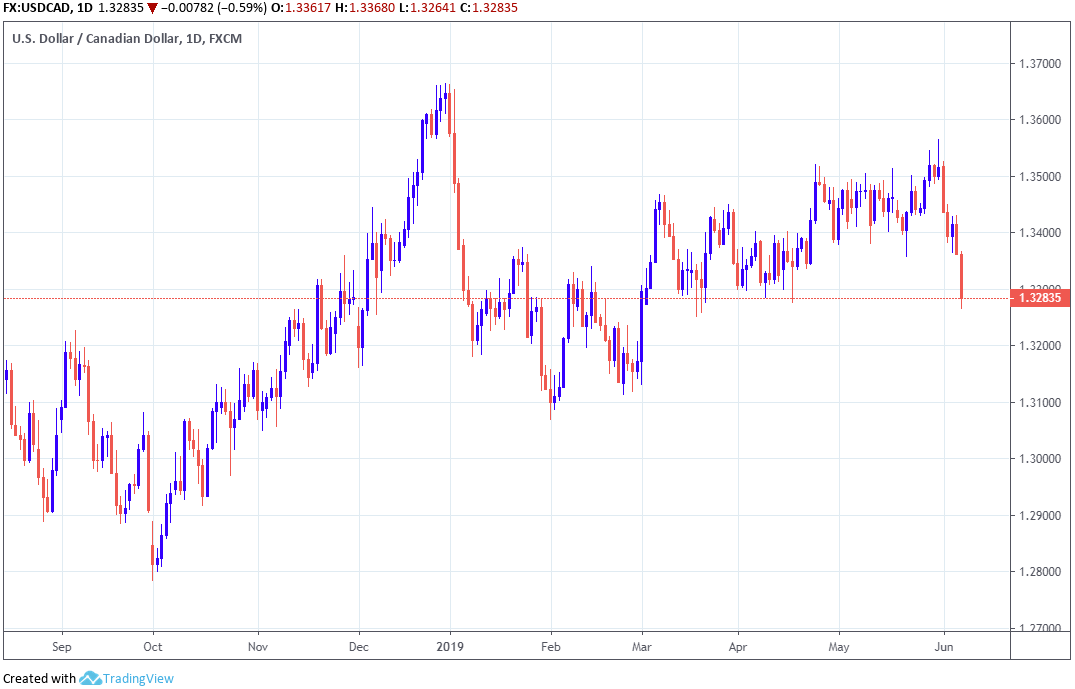 The Pound-to-Canadian-Dollar rate was unchanged at 1.6954 but has fallen 2.55% this year. One of Osborne's colleague says it's in danger of falling further due to a range of technical factors.

"GBP remains prone to a downside extension, following the break below the base of the bear triangle consolidation, in our opinion. Longer run trend momentum signals are tilted against the GBP but the alignment is not strong or conclusive enough – and lacks the support from the shorter term oscillators—to provide much in the way of immediate conviction," says Eric Theoret. 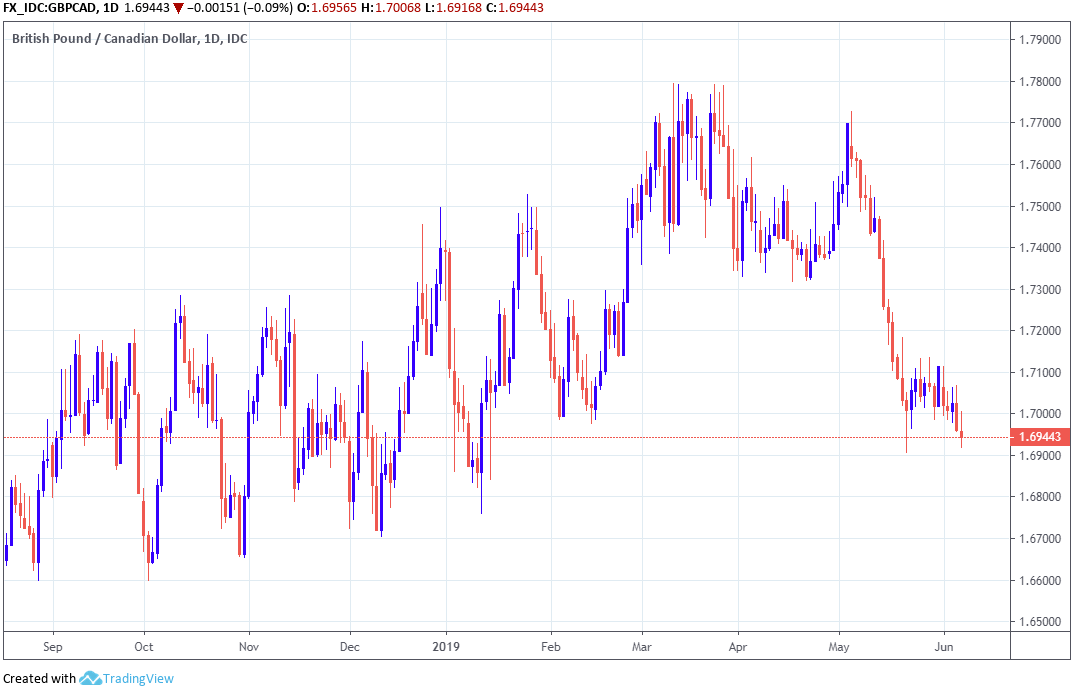 "The labour market data still looks relatively solid in Canada and growth looks on track to rebound to a 2% rate as expected in Q2 after slowing over the prior two quarters.  Risks to the economic outlook from escalating US-led global trade tensions still leave the Bank of Canada with plenty of concerns meaning they will leave interest rates where they are for now," says Nathan Janzen, an economist at RBC Capital Markets.

The Bank of Canada has shifted into 'neutral mode' over recent months and now says interest rates could go either up or down in the next change, after having lifted the cash rate five times, taking it up to 1.75%, since the middle of 2017.

This policy change and fears over what White House trade policy might yet do to the economy has weighed on the Canadian Dollar ever since late 2018, although developments in oil markets have also played a significant role too.

Friday's data and price action in Canadian exchange rates comes amid high hopes that U.S. tariffs on Mexican goods can be avoided, but the looming weekend will be an important one that could ultimately throw a lifeline to those who're betting against the Loonie. 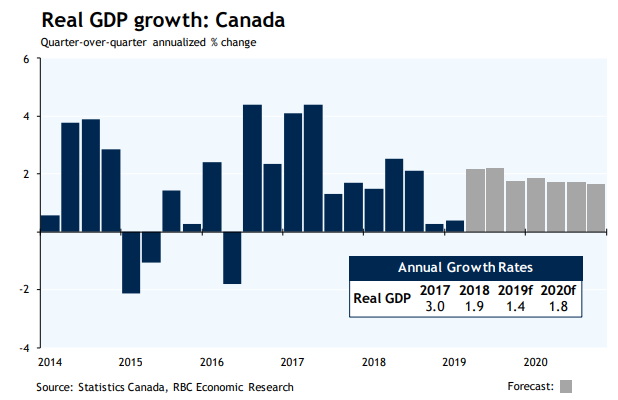 President Donald Trump said last week that from Monday, 10 June a tariff of 5% will be applied to all goods imported into the U.S. from Mexico, citing the country's indifference to migrants who've travelled across South America in the past year, through Mexico and up to the U.S. border where they've attempted to gain legal or illegal entry into the country.

Trump has repeatedly called for Mexico to do more to prevent those 'caravans' from passing through its territory and is now threatening new tariffs on imports from Mexico if it doesn't act to stop the flows. Tariffs will rise steadily each month until either they reach 25% or the Mexican government meets Trump's demands for it to prevent migrants travelling across its territory to enter the U.S.

"We made it clear yesterday at the White House that Mexico must do significantly more to end this crisis of illegal immigration at our border.  We called on them to take even more steps — more decisive action. I’ve been receiving reports throughout the day as those negotiations have continued at the State Department. And we’re encouraged that, frankly, the Mexican delegation brought even more proposals today," Pence says.

Pence told reporters in a press briefing that he'd speak with President Trump on Friday and that the Mexican proposals would be considered over the weekend, which creates two-way risks for the Canadian Dollar ahead of the Monday session. A rejection of the proposals might easily see the Loonie reverse its recent gains while acceptance of the offer could help cement the Canadian Dollar's hold on its newly recovered ground.

The tariff threat comes as lawmakers from the U.S., Mexico and Canada step up efforts to ratify the United-States-Mexico-Canada-Agreement (USMCA), which is an updated version of the NAFTA agreement, although that process is now in doubt. Analysts have long said the Canadian Dollar would suffer greatly if the NAFTA, now USMCA, agreement was torn up by the U.S. Tariffs on Mexican goods are becoming likely and would risk exactly that.