- CIBC says if not for labour market, "We'd be worried about a recession."

- Rapidly decelerating growth means BoC is sidelined for the foreseeable.

The Canadian Dollar was dealt a crushing blow Friday by official data that showed the economy contracting into year-end, as multiple headwinds stymied activity, vindicating the Bank of Canada (BoC) for having said it will be more patient before raising interest rates this year.

Canada's economy contracted by -0.1% in December for a second consecutive month, which means GDP rose by just 0.1% overall in the final quarter of 2018. GDP growth for the year overall nearly halved after falling from 3% in 2017 to just 1.8% in 2018.

A -2.7% drop in investment spending was the main driver behind the decline in growth heading into year-end, as companies grappled with uncertainty over international trade and a bust in the oil market, although exports of goods and services also fell by -0.1% during the period.

Statistics Canada says the fall in crude oil prices hit exports during the period, helping reduce Canada's quarterly pace of growth to its slowest since the second quarter of 2016 when the economy was recovering from price falls that dragged oil down from $114 per barrel in 2014 to $25 by January 2016. 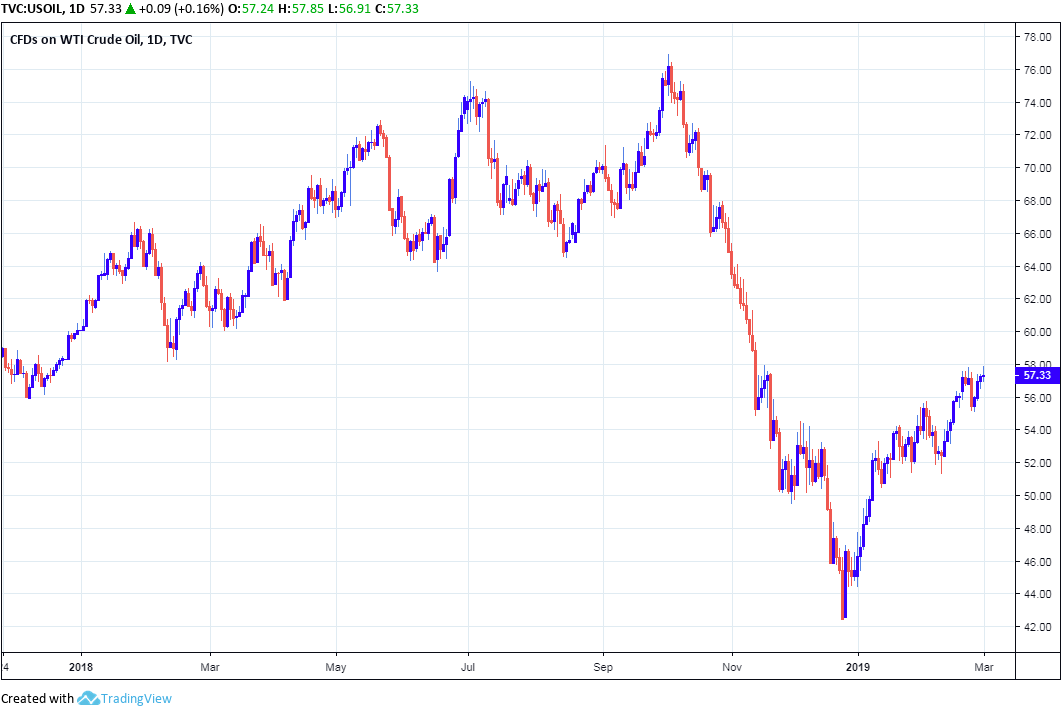 "The "R" word will be on minds as Canada's economy barely skirted the start of a recession in Q4," says Avery Shenfeld, chief economist at CIBC Capital Markets. "If not for a huge employment gain in January we'd be worried about an outright recession, but at this point, its best described as a stalled engine."

A recession is defined as at least two consecutive quarters of contraction in GDP. Canada's economy. Canada's economy has not yet contracted for even a single quarter, although growth is decelerating fast in the wake last year's oil price action and three rate hikes from the Bank of Canada.

"Obviously a weak reading, making next week's Bank of Canada meeting of interest only to the extent that Governor Poloz pulls further back from his talk about normalizing rates towards 3%, which has been very off message relative to the data. Negative for the C$, bullish for short rates," Shenfeld adds. 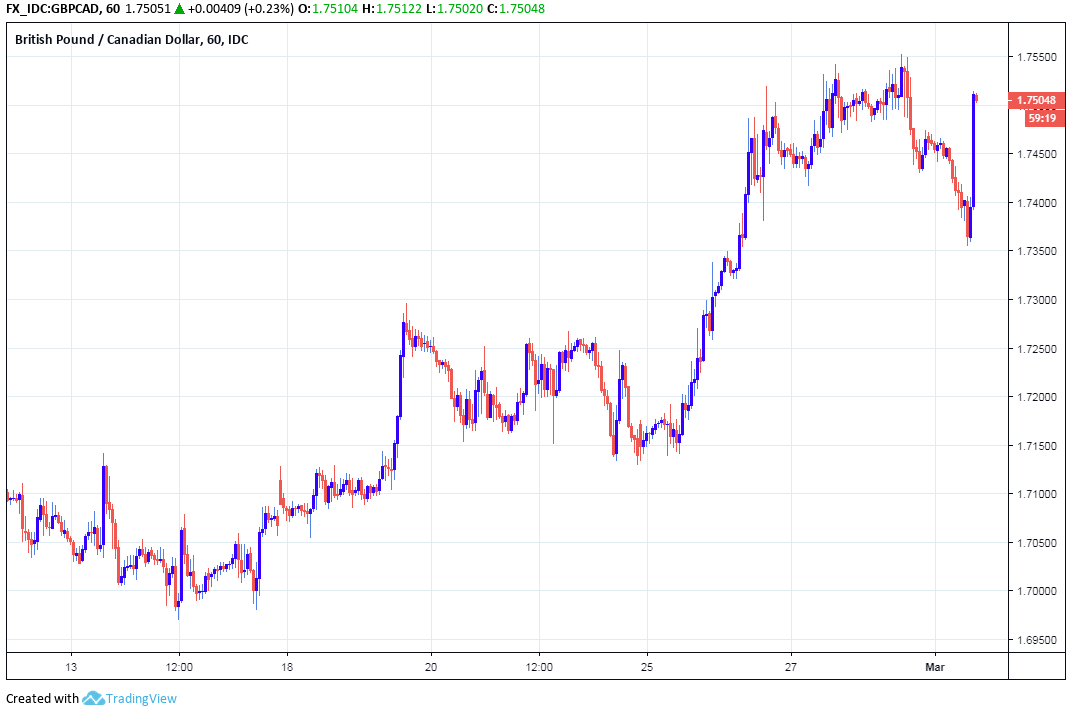 The Pound-to-Canadian-Dollar swapped an earlier -0.34% loss for a 0.18% gain following the release, leaving it trading at 1.7498 and cementing Sterling into its newfound position as the G10 bloc's best performer for 2019.

"CAD weakened notably following the release in what is likely to be a more durable reversal," says Mazen Issa, an FX strategist at TD Securities. "A move through 1.3240/65 should extend a USDCAD short squeeze towards 1.3380. We also think the conditions are in place for CAD weakness on crosses."

The Canadian Dollar ceded its crown as the best performing G10 currency of 2019 to Pound Sterling this week after the Pound-to-Canadian-Dollar rate hit a six month high, meaning the British currency has now advanced against all of its major rivals this year. But Friday's data could easily change this. 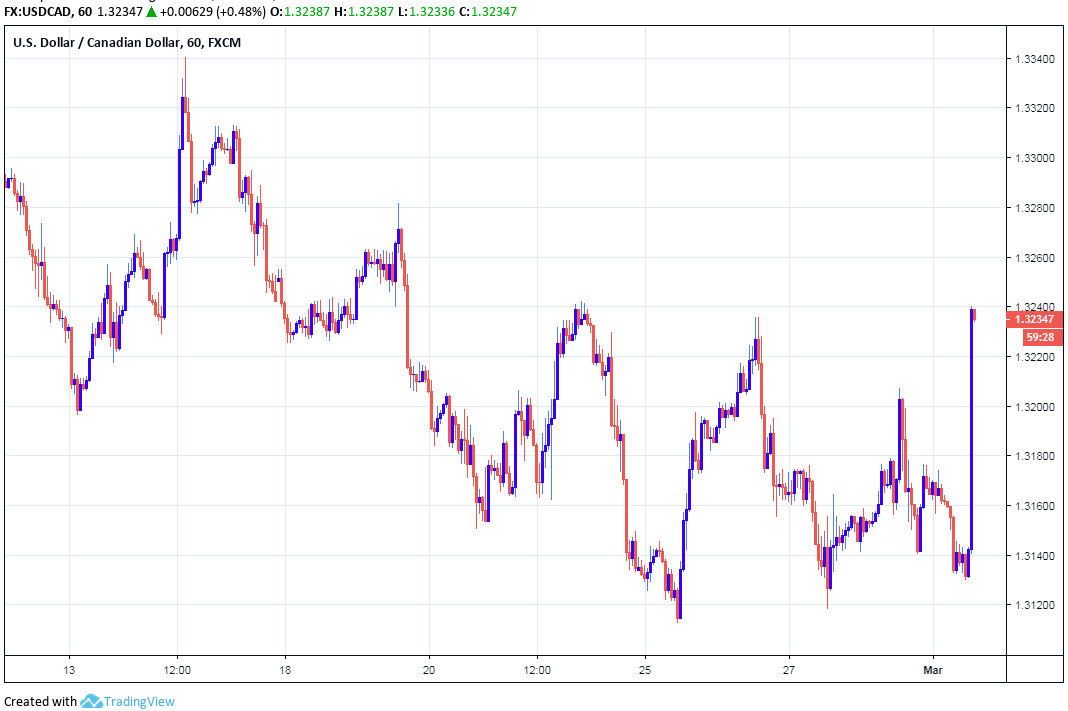 "As much as this was a poor batch of data, the forward looking implications are equally bleak. The contribution to growth from inventories will certainly reverse next quarter, which by itself suggests that 2019Q1 could see a growth rate near zero. The sharp contraction in household consumption is the most worrying aspect," says Robert Both, a macro strategist at TD Securities.

Markets have been watching Canadian economic figures closely, particularly after inflation data showed consumer price pressures remaining elevated at the beginning of the New Year, because a good run of positive numbers could be enough to draw the Bank of Canada back off the sidelines.

Canada's inflation outlook has been clouded of late by a double-digit decline in oil prices during the final quarter of 2019, which has been followed by a 20% increase in various crude oil benchmarks thus far in the New Year. This is is wreaking havoc on headline CPI numbers the world over.

But the steady pace of the BoC's three trimmed mean measures of inflation shows that domestic price pressures remain elevated and could be enough to prompt further rate hikes later this year if there is a sufficient pick-up in investment and economic growth in the interim.

However, Friday's GDP data could have just done away with that idea.

"This will provide a challenging backdrop to next week's Bank of Canada meeting. Governor Poloz has been steadfast in his view that rates need to move higher but with the sharp miss on Q4 and Q1 tracking below BoC forecasts, Poloz's conviction may start to waver," Both adds.

The Bank of Canada said in January it will be more cautious about raising rates than earlier guidance suggested it would. The message was clear in that it will move more slowly than before.

But previously the bank said rates could rise to between 2.5% and 3.5% by early 2020, which led markets to believe as many as three rate hikes were in the cards for 2019 and explains why the Canadian Dollar fell so sharply between early December and the middle of January.

Governor Stephen Poloz said last Thursday, in a speech to the Chamber of Commerce of Metropolitan Montreal, that Canada's current 1.75% interest rate is still low and providing stimulus to the economy. He also said the path back to the neutral has become "less clear" amid multiple headwinds.