The Pound to Australian Dollar exchange rate (GBP/AUD) has been under pressure for much of 2022 but it could be due some near-term relief on the occasion of another interest rate hike at the Reserve Bank of Australia.

Investors anticipate the RBA to hike by another 50 basis points, but it is the guidance as to what the Bank's next steps will be that could offer up some Aussie Dollar volatility.

The decision to hike by 50bp comes as the RBA fights rising inflation, with the latest figures showing prices are rising at a 6.1% year-on-year.

But a 50bp is 'in the price' of Aussie exchange rates and therefore market volatility would only likely follow the guidance the RBA provides investors as to future policy decisions.

Australia's economy is slowing, with August PMI data showing the composite index entered into contractionary territory amidst a decline in services sector activity.

"Beyond this month the outlook looks far bumpier. The RBA could therefore be driven to signal a smaller pace of hikes from next month, as a weaker economic backdrop accelerates, delivering what we might describe as a dovish hike," says a daily currency update from Moneycorp.

"Given that 50bps is all but priced into markets, the Aussie is likely to be driven on the day by the commentary from the RBA, with the Aussie likely being boosted most by bullish calls, and hindered if the RBA adopt a dovish tone," adds the note.

A retracement in recent Australian Dollar strength would allow the GBP/AUD exchange rate the chance to reinforce levels above 1.69.

"Of more importance is the language accompanying a 50bps hike. Does the RBA strengthen its language/resolve to get on top of inflation by removing 'even keel' or 'path to achieve this balance is a narrow one and clouded in uncertainty'. Or does the RBA signal a more prolonged hiking cycle but highlights a step down in the pace of rate hikes? We favour the 2nd option," says Prashant Newnaha, Senior Asia-Pacific Rates Strategist at TD Securities.

This scenario outcome is ascribed odds of 50% and would be met with a slight uplift in the Aussie Dollar, says Newnaha.

Any relief in GBP/AUD remains temporary at this stage given the overwhelmingly strong downtrend that has been in place for much of 2022.

The Australian Dollar is 2022's third-best performing major currency, thanks to Australia's strong trade surplus that means its currency is backed by strong export earnings.

This is the opposite to the UK which maintains a long-running trade deficit, meaning the currency must ultimately depreciate in value when foreign investors adopt more defensive positioning, as is currently the case. 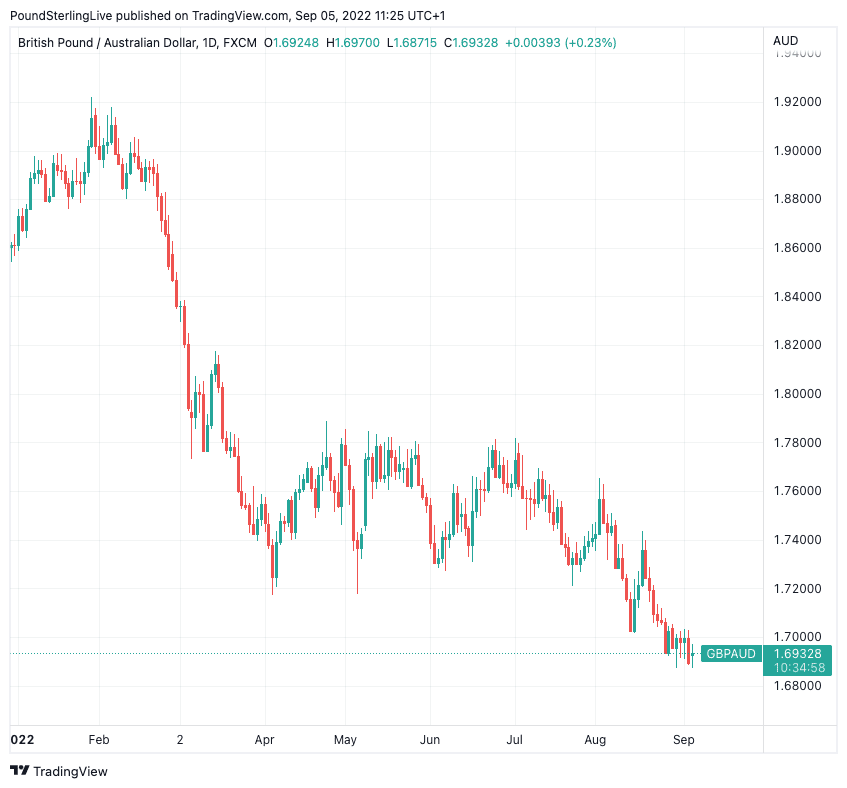 Above: GBP/AUD at daily intervals. Set your FX rate alert here in order to stay on top of the market.

Australia's trade surplus is underpinned by its iron ore exports, and more importantly during 2022, natural gas and coal exports.

"The RBA has predicted that Australia’s terms of trade are likely to have reached a new historical high in the June quarter, they are then likely to decline but are still expected to follow a higher trajectory than has previously been forecast," says Jane Foley, Senior FX Strategist at Rabobank.

Rabobank's forecasts show an expectations for further Aussie Dollar weakness against the U.S. Dollar over the next three months ahead of a recovery over the six month horizon.

And, given the Aussie economy looks set to avoid recession, unlike those of the Eurozone and UK, strength against the Euro and Pound is likely.

"Terms of trade gains that should be AUD-positive, particularly in energy exports," says Patrick Locke, FX Strategist at JP Morgan.

"We remain constructive on AUD, particularly on the crosses, as the economy’s strong supply-side performance through the pandemic should mitigate the risk of the RBA having to overtighten, and its commodity exporter status also provides natural insulation from stagflationary forces," he adds.

If this view is correct GBP/AUD would be expected to remain under pressure.