The Australian Dollar is notably undervalued and could be the foreign exchange market's star, but only once the world rids itself of its current list of ills.

This time will however come says Kit Juckes, Head of FX research at Société Générale, who reckons by the time the year turns a major shift in currency markets will be underway.

The call comes as the French-based international financial services provider and investment bank reviews the currency market at the mid-point of the year and sets out its expectations for coming weeks and months.

"With higher yields, elevated volatility and wider spreads, the bond market is warning of danger, and the FX market is listening. If the endgame is a US recession, the yen should do very well as yields fall," says Juckes.

"If it’s a soft landing, the Australian dollar may come out top currency of all," he says.

A 'hard landing' - by contrast - is defined by Soc Gen as a recession in the U.S. and Eurozone which creates the macro economic backdrop that tends to favour the U.S. Dollar and other safe havens at the expense of the likes of the Australian Dollar.

The importance of China to the Aussie was on display Tuesday when China said it would be easing its Covid containment restrictions, boosting expectations for a recovery in the world's second largest economy and Australia's largest export market.

The Australian Dollar rose on the news.

Trinh Nguyen, Senior Economist for Emerging Asia at Natixis, says the move is part of a trend to normalisation in China and will "jolt" demand.

"China is employing a different kind of zero-Covid, as in no more Q2 strict lockdown, both internally & externally," she says.

But beware the Australian Dollar heading into the late northern hemisphere summer: Soc Gen analysis reveals August has been the best month of the year since 1998 for JPY against USD, but the worst for AUD and NZD.

The time to look at betting on a stronger Australian Dollar therefore comes towards the end of 2022 with Soc Gen also seeing a peak in the U.S. Dollar being likely around then. 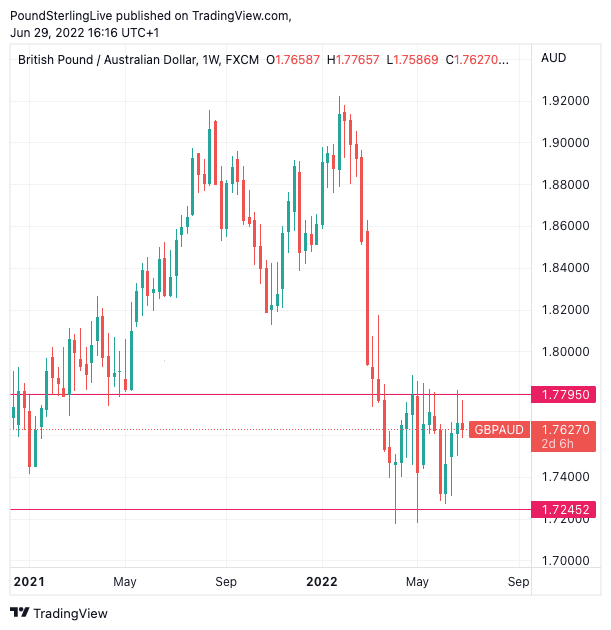 Above: GBP/AUD at weekly intervals showing performance since the start of 2021.

But this would all depend on how the global macro economic environment progresses.

"Once global economic, geopolitical and market turmoil eases, the AUD will be our favourite G10 currency," says Juckes.

Regarding the Reserve Bank of Australia, Juckes says the sustained shift in Australian monetary policy still needs to be channelled into the cheap Australian Dollar.

The RBA is expected by markets - as per money market pricing - to raise interest rates by a further 300 basis points by the end of the year, more than any other central bank.

On this basis Juckes says the Aussie Dollar "is massively undervalued with respect to relative rates".