The Australian Dollar was among the top performing major currencies in the final session of the week but it was also close to the bottom of the barrel for the period overall and may be at risk of further losses that could see AUD/USD slipping back below 0.70, according to strategists at Westpac.

Australia’s Dollar rebounded on Friday from steep losses sustained previously during the Thursday session, gaining relief alongside the New Zealand Dollar and Japanese Yen, although it remained near to June lows and is potentially at risk of fresh declines in the days ahead.

“The RBA’s 50bp hike and hawkish statement will strengthen the yield spread support for the Aussie for some time. But AUD is lower since the RBA announcement against the likes of USD, EUR, GBP and CAD. Only AUD/NZD is really showing signs of fresh fuel from the rate outlook. This highlights the headwinds for the Aussie from the very difficult global economic environment,” says Sean Callow, a senior currency strategist at Westpac.

“A$ correlations with equities remain very elevated, as seen once again overnight. Given the Fed outlook and the growth-squeezing impact of soaring energy prices, global equity sentiment is likely to remain fragile for some time. We see risks to the 0.7000/50 area in coming days and cannot rule out a brief probe back below 0.7000, given the sour equity mood,” Callow said on Friday. 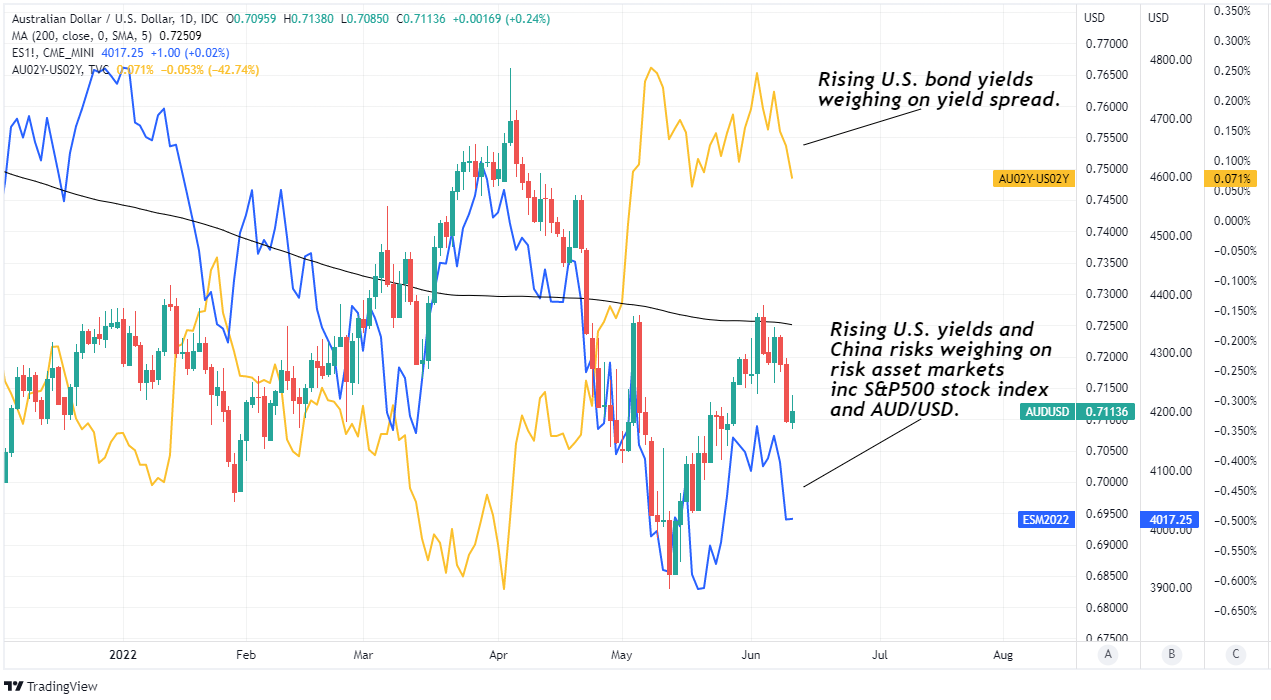 Stock markets tumbled across the globe on Thursday U.S. government bond yields rallied and fresh questions were asked about the outlook for the Chinese economy after it emerged that some parts of the port city Shanghai could be placed into another ‘lockdown’ as soon as the weekend.

“The impacts of a hawkish RBA on the AUD are being offset by the weak near term Chinese economic outlook,” says Kristina Clifton, a senior economist and currency strategist at Commonwealth Bank of Australia.

“China’s President Xi has doubled down on China’s covid zero policy saying that the policy must be adhered to “unswervingly”. The covid zero policy will be a large headwind for the Chinese economy and will keep a lid on CNH, AUD, NZD,” Clifton and colleagues said on Friday.

Xinhua News Agency reported on Thursday that China’s President Xi Jingping remains committed to eradicating the coronavirus inside of China while officials in Shanghai reportedly announced that some local areas home to as many as 2.65 million could face fresh restrictions in the days ahead. 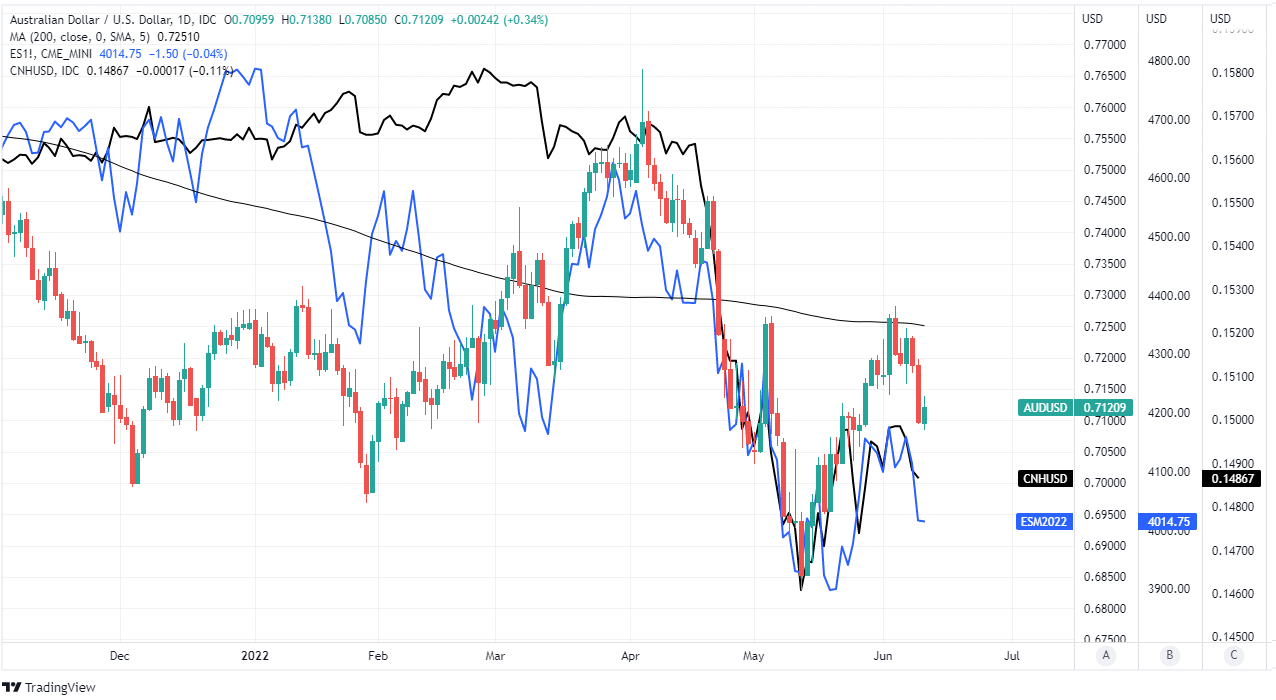 “A risk off tone across markets saw commodities come under pressure. This was sparked by renewed lockdowns in Shanghai, which casts doubt on the recovery that had boosted sentiment across commodity markets in recent weeks,” says David Plank, head of Australian economics at ANZ.

Many other currencies were adversely impacted during the early weeks of April after authorities in Shanghai placed the city of more than 25 million under China’s longest and most stringent ‘lockdown’ to date, which only began to be lifted in earnest during early June.

The city's port is effectively the nerve centre of the global manufacturing industry due to China’s significance in international supply chains.

This may be why the April lockdown impacted more than just those currencies that do a large export trade with China and instead also weighed on those which import large volumes of goods from the country.

That early April to late May period also coincided with a meaningfully hawkish shift in the Federal Reserve monetary policy stance and gave way to a steep and strong rally by the U.S. Dollar, which saw some currencies falling to multi-year lows against the greenback.

This was also the last point at which the AUD/USD exchange rate traded below the 0.70 handle that is now back in focus for some strategists. 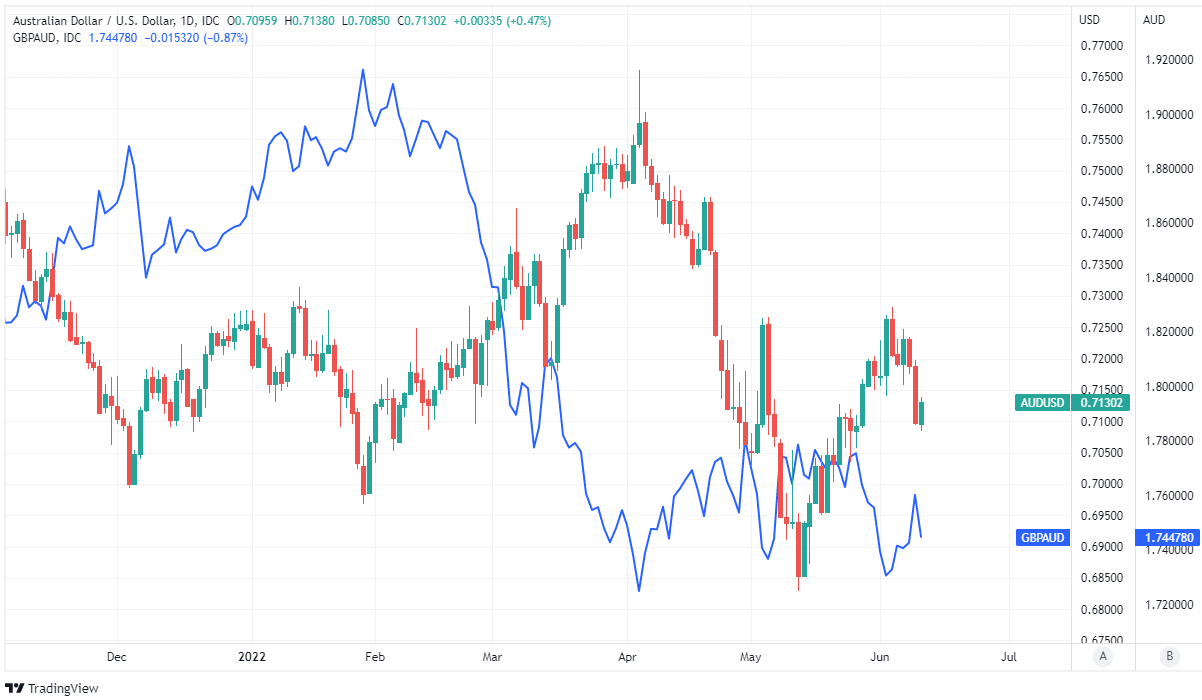 Above: AUD/USD shown at daily intervals alongside GBP/AUD. Click image for closer inspection.