The Australian Dollar is "now back in the ascendancy" against the U.S. Dollar says National Australia Bank (NAB), although their latest suite of currency forecasts show the Australian unit could lose ground against the Pound over coming months.

The Australian lender says the Australian Dollar is likely to remain supported by robust global commodity prices, meanwhile the Pound will be supported by the UK's steady exit from lockdown thanks to the rollout of vaccines.

In a regular monthly currency briefing note, NAB says the Pound's recent pull-back is likely to fade and give way to "renewed assaults" on the U.S. Dollar and other currencies.

The predictions come amidst a period of attrition between the two 'pro cyclical' currencies of Australia and the UK.

The Pound-to-Australian Dollar exchange rate starts the new week flat at 1.7900 while in the previous week the pair was virtually unchanged. 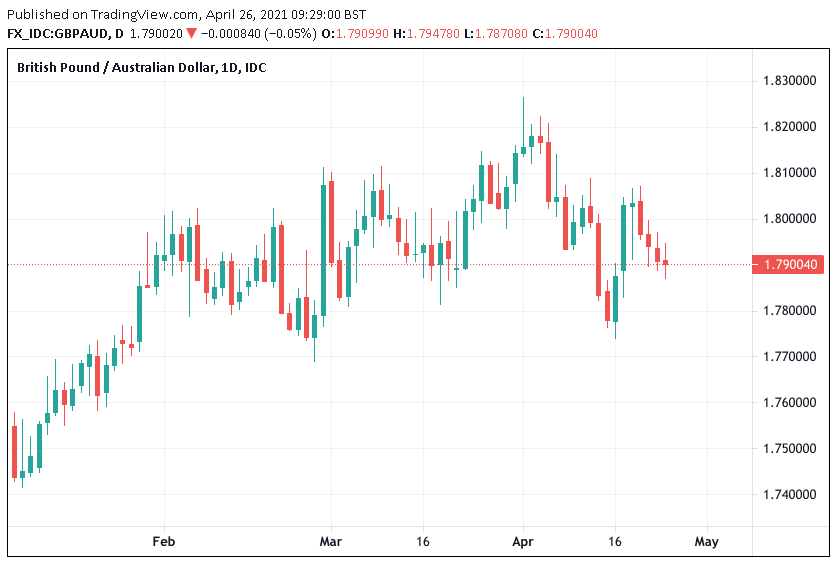 But against the U.S. Dollar, a return of Australian Dollar strength might be more noticeable according to researchers.

"After a three-week period confined to a narrow one and a half cent range, AUD is now back in the ascendancy," says Ray Attrill, Head of FX Strategy at NAB.

While recent strength in AUD/USD has been attributed to U.S. Dollar weakness by NAB, they do note risk sentiment and commodity prices have been supportive of some of the Aussie Dollar's latest gains.

Westpac say commodity prices are likely to remain supportive of the Australian Dollar, courtesy of ongoing strong demand from China and a broader global recovery that is likely to accelerate into the second half of the year. 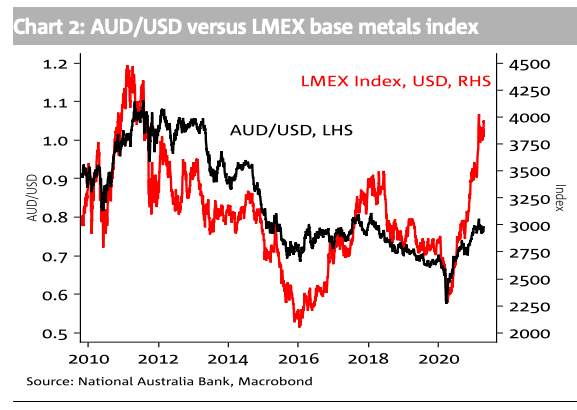 It is noted by researchers that the Citi real time terms of trade proxy for Australia has this month pushed back up to its December 2020 highs, as has the LMEX index of
base metals.

"This has helped lift our medium-term AUD valuation estimate to 79 cents. Prevailing levels for these commodity indices may only need to be maintained to justify higher AUD levels," says Attrill.

Australia is a major producer of bulk raw materials, with the likes of iron ore, coal and natural gas contributing to the country's healthy trade surplus.

A trade surplus arises when a country earns more through exports than it spends via imports, creating a fundamentally supportive flow dynamic for its currency.

It is for this reason the Australian Dollar is often referred to as a 'commodity currency', reflecting its sensitivity to global commodity market developments which are often in turn connected to broader trends in global investor sentiment.

Should commodity prices and sentiment remain constructive in 2021 then the Aussie Dollar is likely to remain supported.

This equates to a Pound-to-Australian Dollar exchange rate forecast of 1.8181.