The Australian Dollar backed away from the edge of a precipice on Friday amid an evident improvement in investor sentiment, which turned GBP/AUD away from its year-to-date high set earlier this week.

Australian Dollars were bought widely alongside commodities and other risk assets, taking AUD/USD back above 0.7600 as well as its 100-day moving average at 0.7616, a key rubicon it may need to hold above through the Friday close to sustain upward momentum next week.

Many assets and exchange rates have been volatile this week, which has helped lift Pound-Australian Dollar rate to its highest since last November although strength was ebbing on Friday.

"Our yield differential models suggest USD has become less undervalued against the AUD, GBP and NZD," says Lee Hardman, a currency analyst at MUFG. "USD has continued to strengthen over the past week with gains becoming more evident against more growth sensitive G10 currencies."

The Pound-Australian Dollar rate was on course to end the week more than 1% higher despite Sterling coming undone in tandem with the Euro-Dollar rate, which fell as a third wave of coronavirus infections prompted further or prolonged restrictions on activity in some countries. GBP/AUD edged back from a 2021 high and below 1.81 on Friday but was still above its 200-week moving average at 1.8042; a potentially positive development. 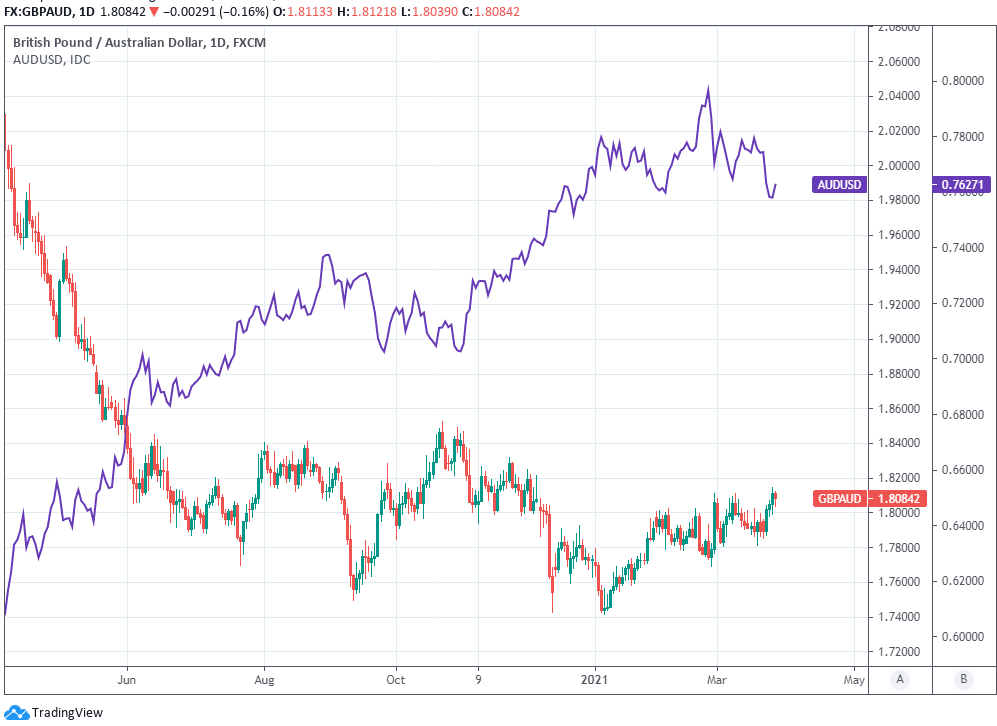 Above: Pound-to-Australian Dollar rate at daily intervals alongside AUD/USD (purple).

The Pound has been rising against the Aussie throughout 2021 while the Aussie has fallen against the U.S. Dollar since mid-February when the Reserve Bank of Australia (RBA) began indicating that a desire to lean against currency appreciation may have been a prominent consideration in the bank's decision to do more quantitative easing.

Assistant RBA Governor Christopher Kent and Governor Philip Lowe subsequently all-but confirmed this was likely the case, creating an implicit threat of further action in the event of another rally in AUD/USD - which has since fallen to a year-to-date loss of nearly -1%.

"Higher bond yields in the US and the perception that the Fed is not yet uncomfortable with this move have played into the hands of other G10 central bankers. Gains in USD that resulted from the move in US yields have meant currency depreciation elsewhere," says Jane Foley, head of FX strategy at Rabobank. "The RBA’s commitment to its accommodative monetary policies, bad news on the topic of trade tensions between China and Australia and a re-think in the market about the degree of hostility in the US-China relationship have all contributed to the move in AUD/USD back to its February low."

"It is our expectation that the greenback will soften across the board in Q2. Consequently we see scope for AUD/USD to recover some ground and look for choppy trading in the 0.77/0.78 area on a 3 to 6 month horizon. We retain our forecast that a combination of accommodative RBA policies and China trade tensions are likely to keep AUD/USD below 0.80 this year," Foley says.

The RBA has attempted to discourage the Aussie from rising because the bank fears for its 2%-to-3% inflation target which, unmet for a number of years, might become even harder to meet if strengthening exchange rates cheapen the cost of imported goods. 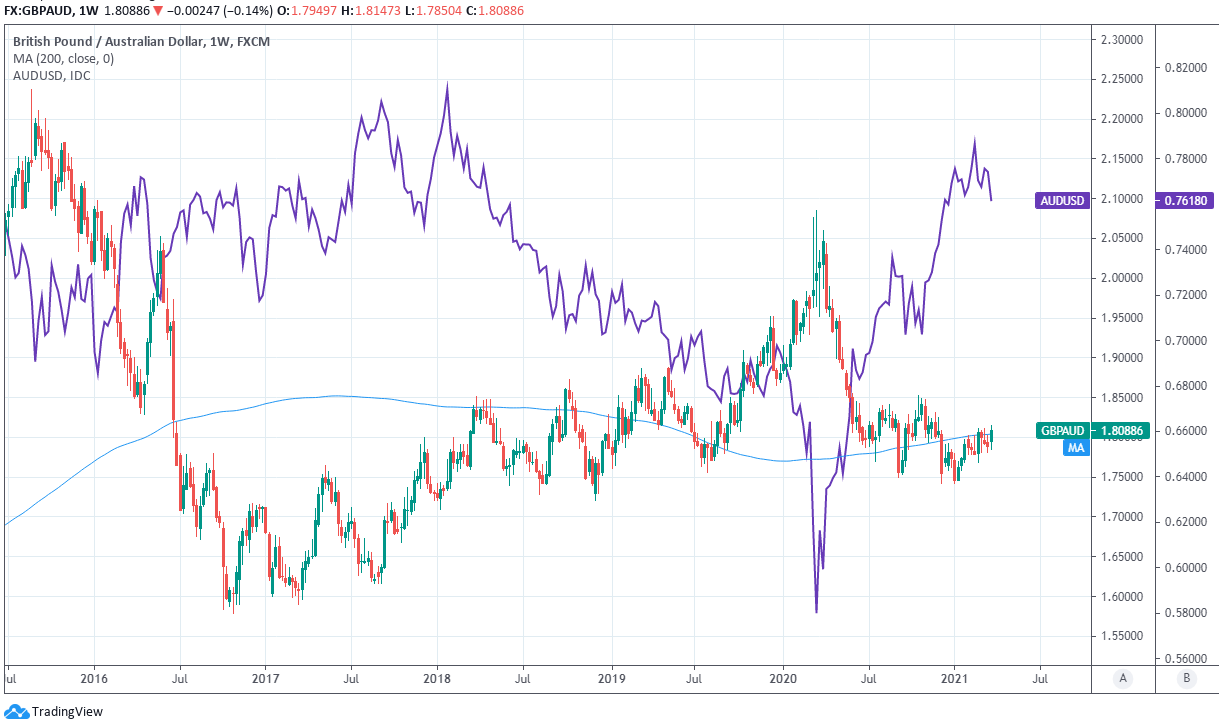 The Aussie was on course Friday to end the week near the bottom of the major currency table alongside a recently troubled New Zealand Dollar.

"Prospects for AUD/NZD are good in coming months. New Zealand’s economic recovery unexpectedly suffered a set‑back in Q4 2020. As our ASB colleagues noted recently, the risks in the near term are heightened the Reserve Bank of New Zealand eases monetary policy again. By contrast, the Australian economic recovery is going from strength to strength," says Joseph Capurso, a strategist at Commonwealth Bank of Australia.

New Zealand's Dollar unravelled when the government pushed to end mortgage tax reliefs for investors in residential property, citing financial stability risks as well as social concerns before coughing up a  NZ$3.8 bn spending package worth almost 1.5% of GDP and designed to boost home supply.

The Kiwi housing market is now the "least affordable in the OECD," with real estate prices having surged since the onset of the pandemic, just like in Australia. The Real Estate Institute of New Zealand (REINZ) house price index rose 21.5% in the year to February while the median house price reached NZ$780k (£395k, A$715k).

This Australian Dollar performance did also come alongside a broad lift in U.S. Dollar rates however, which the Aussie is sensitive to for reasons including its exposure to U.S. Dollar denominated commodity prices that become more expensive as the greenback rises. 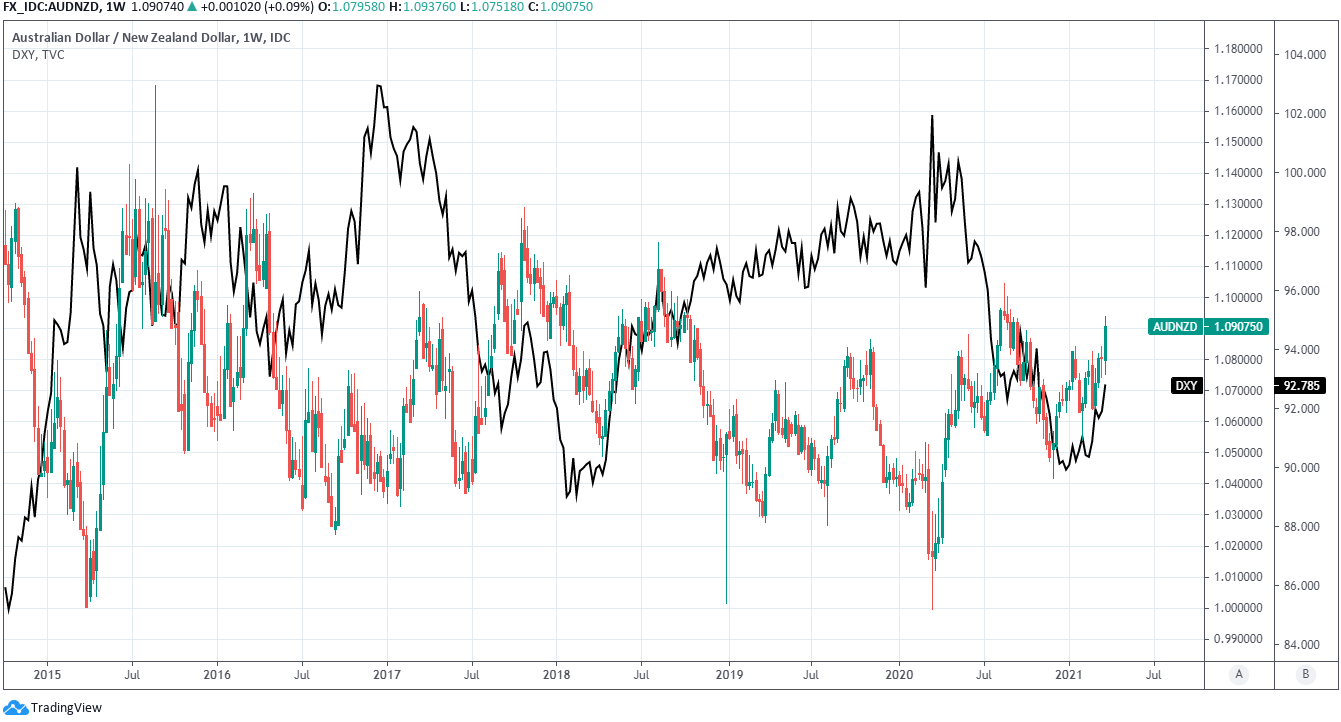