- AUD/USD seen roadblocked by 0.78 short-term post-RBA.
- GBP/AUD may see 1.79-to-1.83 on GBP's outperformance.
- But UK's vulnerability, commodity prices to weigh further out.

The Australian Dollar could underperform the Pound over coming days and weeks as Reserve Bank of Australia (RBA) monetary policy handicaps the antipodean unit, according to analysts.

The Australia Dollar starts the new week by edging higher against low-yielding major currencies like the Japanese Yen, Swiss Franc, U.S. Dollar and Euro on Monday while retreating from all other 'risk currencies' including the Pound, which came close to topping the major currency performance ranking again.

Monday's price action furthers a week of lacklustre performance from the Aussie after the RBA added a further A$100bn to its quantitative easing programme, which will enable the bank to keep buying government bonds at a pace of A$5BN per week after the original program expires in April.

"There was also a lot of rhetoric to make clear that a stronger Aussie would be unhelpful. This stance will surely help keep a lid on A$ upside multi-month, but the past week highlighted how a fragile USD is likely to mean AUD/USD dips are shallow," says Sean Callow at Westpac, "USD’s dismal recent price action suggests 0.7650 or just below will be the extent of pullbacks for now. But we switch to neutral for the week ahead, with the 0.78 area to be solid resistance." 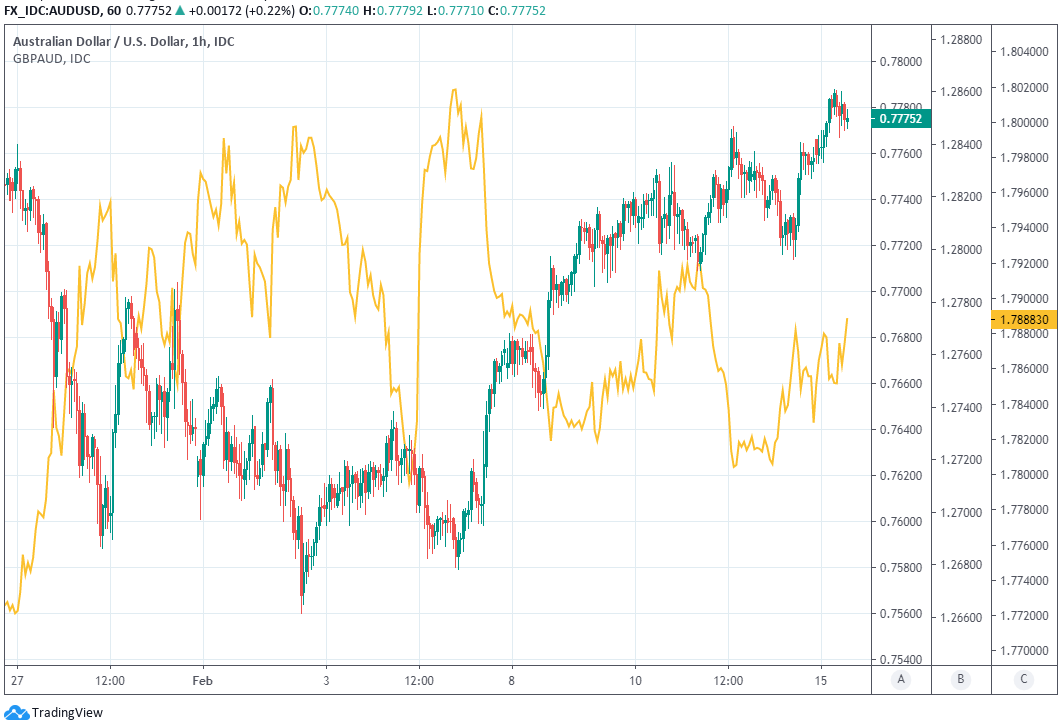 Governor Philip Lowe said this month the Aussie is "in the upper end of the range of recent years" before indicating that a desire to lean against appreciation may have been a prominent consideration in February's decision to do more quantitative easing. That left investors cautious, with the A$100bn additional bond buy threatening to leave them short of yield.

"We see AUD as the most vulnerable currency in the G10 $-bloc due to its ever more unattractive rate profile after the RBA dovish shift and the material risks of iron ore price corrections. We remain bullish on AUD/USD in the medium-term as we think the global reflation story and a generalized weak-USD environment should ultimately prevail and push the pair above 0.80 in 2H21," says Francesco Pesole, a strategist at ING.

Australia's Dollar is now the lowest yielding major 'risk' currency after the RBA cut its cash rate to 0.10% in November, discouraging investors away from the currency, although the international rollout of coronavirus vaccinations and prospect of a global economic recovery this year is seen as supportive of commodity prices over the medium-term and as something that limits the downside for the Aussie in the weeks ahead.

Pound Sterling Live have reported regularly that the price of iron ore has been a notable factor in determining levels in the Australian Dollar, with the rising commodity being broadly supportive.

Should markets and commodity prices remain on an uptrend then the Aussie currency will likely remain supported.

Analysts at JP Morgan's trading desk in London say they are looking for a further decline in equity market volatility (as reflected by the VIX index) to signal the potential for further improvement in investor sentiment.

"The next thing to watch in equities is VIX going under 20 and inspiring further systematic inflows. Higher SPX and lower vol points to higher AUD and lower USD and that’s the way I’m playing it," says a note from the JP Morgan trading desk.

Both Westpac and ING look for AUD/USD to trade between roughly 0.7650 and 0.78 over the coming weeks, while also looking for the main Sterling exchange rate GBP/USD to advance toward 1.40 as the British currency continues to outperform.

This points the Pound-to-Australian Dollar rate toward a range spanning the gap between 1.7948 and 1.83 in the short-term, a trajectory that's also confirmed by signals coming off of the charts. 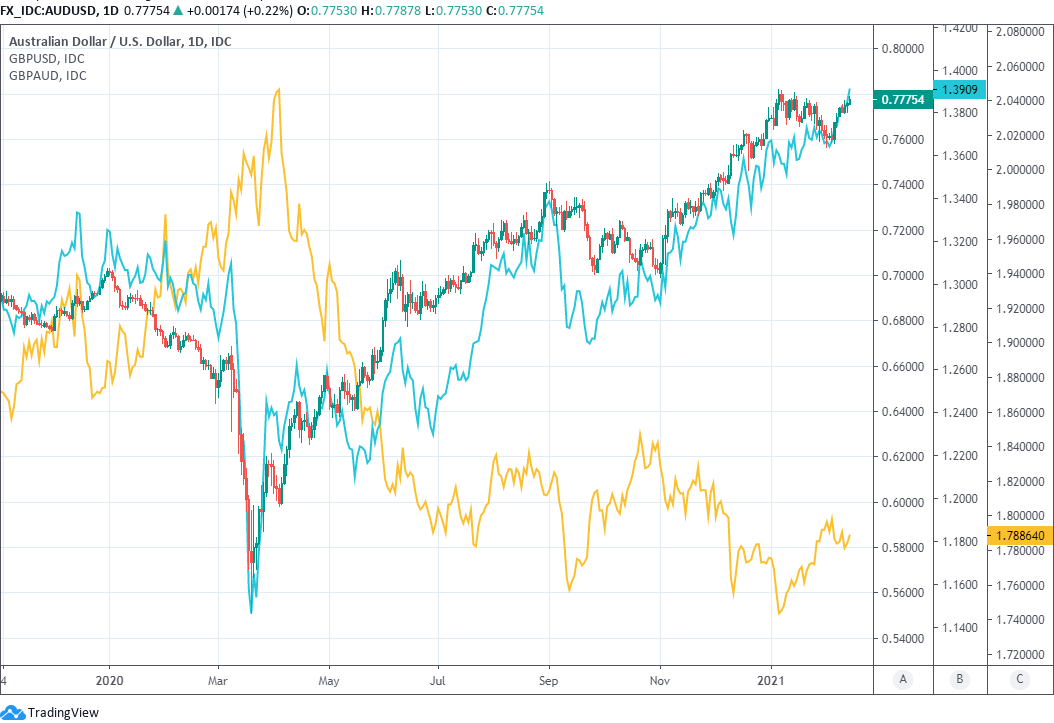 "AUD/USD has broken higher from its consolidation pattern and attention is now on the .7820 January high," says Karen Jones, head of technical analysis for currencies, commodities and bonds at Commerzbank. "GBP/USD has broken higher overnight and this has left a time zone gap back at 1.3864 and this may be filled ahead of further gains (where we left the market at close of business in NY). Our longer term target is offered by the 2018 peak at 1.4377."

GBP/AUD would trade as high as 1.8286 if GBP/USD rose to 1.4377 in line with Jones' outlook while AUD/USD traded around 0.7820, which would be Sterling's highest level since November.

The Pound has topped the board thus far in 2021, aided by a faster coronavirus vaccination program than is being seen in other major economies, an upbeat Bank of England (BoE), the dissipation of 'no deal' Brexit risks and what looks to be a central bank bid for Sterling.

However, some analysts are sceptical that it will be able to sustain those levels and its nascent position at the forefront of the major currency pack.

"A relatively quicker pace of vaccine roll-out in the UK plays positively to Sterling in the near term. But Sterling’s recovery could fade later in the year as it becomes more apparent that the agreed deal is weighing on trend growth. Softer productivity trends, deep economic scarring and deteriorating sustainable current account deficit position. We have a bearish outlook for GBP/AUD," says Paul Robson, head of G10 FX strategy at Natwest Markets. 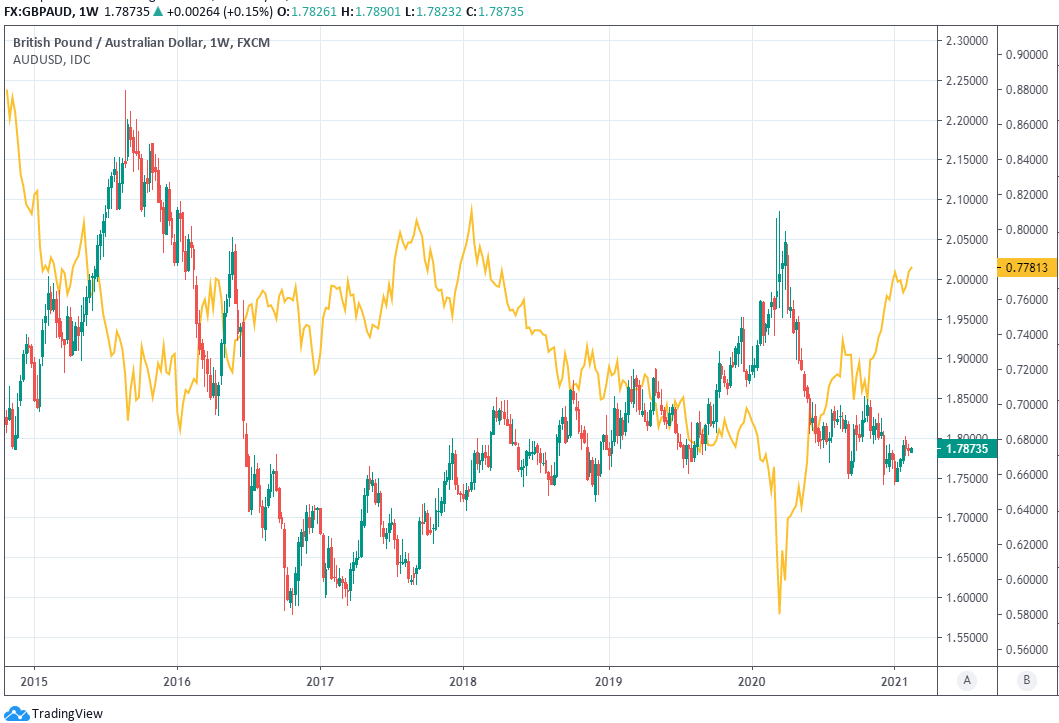