The British Pound can appreciate against the Australian Dollar in the near-term according to a leading Australian bank, however by the time 2021 is done the Pound-to-Australian Dollar exchange rate (GBP/AUD) is likely to be lower.

Analysts at Westpac say there are a number of near-term drivers that are playing into Sterling's favour but an expanding global economic rebound expected over coming months is being tipped to inevitably favour the Aussie.

"So far in 2021, the best performing G10 currencies have been commodity currencies CAD, NOK, AUD and NZD but also sterling. Initially the pound appeared to gain on the somewhat low key start to UK trade outside the European Union," says Sean Callow, FX Strategist at Westpac.

Callow says the positive narrative behind the British Pound soon switched to relative vaccination rates, with the UK delivering one of the fastest paces of vaccine rollout in the world.

The GBP/AUD exchange rate touched a multi-month low at 1.7416 on January 07 before embarking on a steady path of appreciation that took it to a three-month high at 1.8113 on March 09, from where it has consolidated and is quoted at 1.8035 at the time of publication. 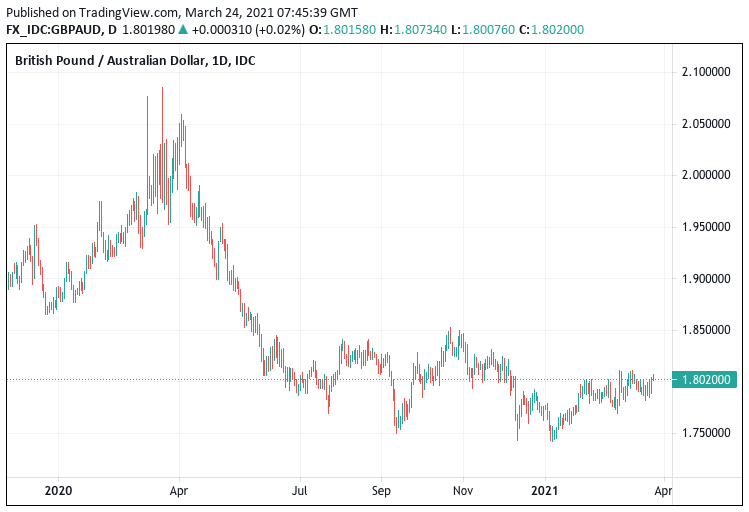 An additional potential driver for any further near-term gains in Sterling is the difference between short-term interest rates on offer in the UK and Australia, in particular 2-year swap spreads, which currency favour Sterling.

This is in turn said to be linked to the relative guidance being offered up by the Reserve Bank of Australia and the Bank of England.

"But while the RBA and BoE both have a 0.1% cash rate, 2 year swap spreads have resumed their drift to the pound’s favour. BoE official rhetoric has been mixed but overall less dovish than the RBA’s," says Callow.

The Bank of England said in February it did not envisage cutting interest rates to 0% or below given expectations for a rebound in the UK economy during 2021, guidance that prompted a relief rally in the Pound that lasted until March.

This has allowed the yield paid on UK government bonds to rise relative to those in other countries, which is typically said by foreign exchange analysts to be supportive of the Pound. 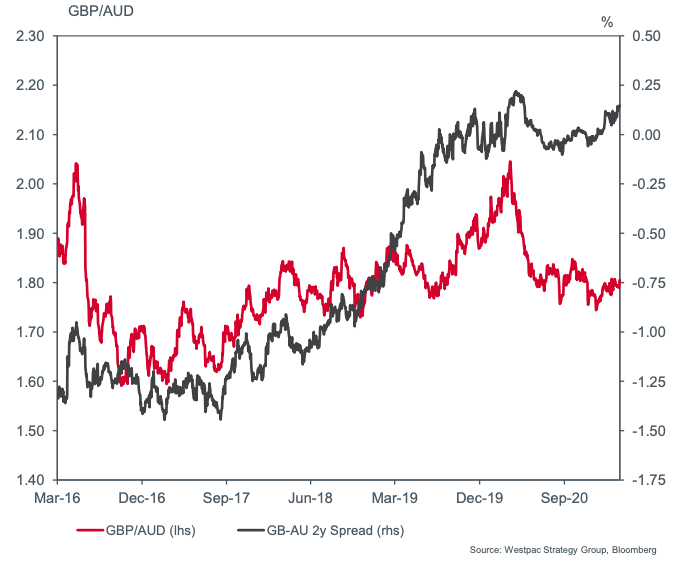 The fundamental backdrop underpinning the Australian Dollar was confirmed earlier in March by news of a fresh record high in Australia's trade surplus, which will likely mean downside in the Australian Dollar will be limited and puts it in a good position to spring higher if global markets manage to regain an offensive footing.

It was reported by the ABS onMarch 04 that Australia's trade surplus in goods and services hit A$10.1BN in January, a fresh record high. This represents a A$3.0BN improvement on December, which was revised up from A$6.9BN to A$7.1BN.

The main driver for the boost to Australian exports was solid demand from China for raw materials.

Should a broader global economic recovery underpin demand for these raw materials then the Aussie Dollar could find itself well supported over coming months.

"The Aussie stands to gain more from a synchronised global rebound over 2021 than the pound does, especially with Asia likely to keep outperforming," says Callow.

"In the 48-year history of modern floating exchange rates, AUD has never been backed by a current account surplus anywhere near that magnitude. Given the pullback last week, we think the present moment is a good entry point for re-establishing long-AUD positions," says Stephen Gallo, European Head of FX Strategy at BMO Capital.

Any Australian Dollar gains could however be stunted by currency investor concerns regarding the global economic recovery. Investors entered 2021 in bullish form, expecting the rollout of covid vaccines to kill the covid-19 crisis and allow for a rebound in activity.

While this thesis is still broadly intact it has been challenged by surging cases in Europe and in some Developing Markets.

New lockdowns in Europe will delay the rebound there and potentially keep markets capped, which analysts say would typically be to the determiner of the 'high beta' Australian Dollar.