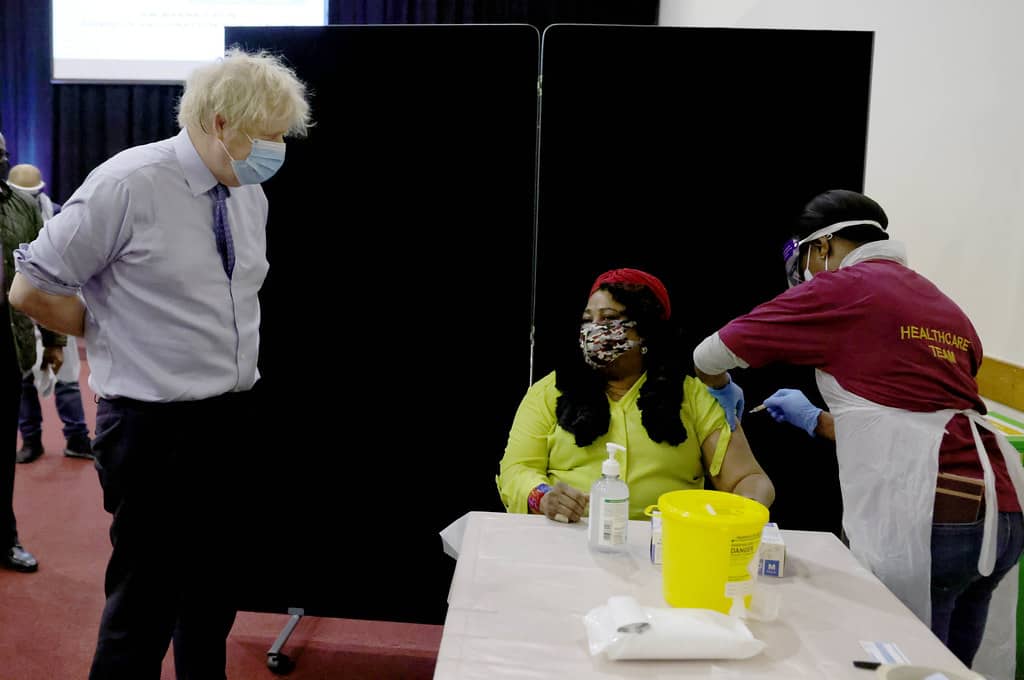 The British Pound's strong start to 2021 could extend as the UK's vaccination programme is reportedly set to accelerate over coming days, although some analysts warn the currency's period of outperformance will likely be brief and declines into year-end are possible.

The Pound is one of 2021's best performing currencies and a key fundamental drivers of this advance is the speed of the UK's vaccination rollout relative to that in other major economies, further gains are therefore dependent on this advantage being maintained.

"Sterling has benefited from the fast UK vaccine rollout this year," says George Vessey, UK Currency Strategist at Western Union Business Solutions. "GBP/EUR is edging towards the €1.17 handle and could challenge fresh 1-year highs this week if the Euro does weaken."

The UK's existing timetable to unlock the economy sees a gradual easing of restrictions from March 08 all the way through to June 21 when all restrictions are expected to be removed, allowing for the economic recovery to build up significant momentum.

"The recovery looks set to be underpinned by the UK’s impressive vaccine rollout, enabling the economy to return to more normal conditions in line with the government’s latest roadmap," says Philip Shaw, an economist at Investec.

Businesses and consumers will likely sit on their money until they are confident that lockdowns are firmly in the past, meaning a vaccine-lead reopening of the economy will be more potent than the attempts made in 2020.

The timetable is only likely to be met should the government's vaccination programme proceed according to plan and some analysts have raised caution on Sterling's outlook as a result.

Official government data shows the UK's rate of vaccination has stalled at a constant level, allowing other nations to start catching up and thereby diminishing any potential advantages of reopening sooner.

The below graphic from investment bank Morgan Stanley shows that while the UK enjoyed an early acceleration and lead in the vaccination programme, EU nations are starting to catch up: 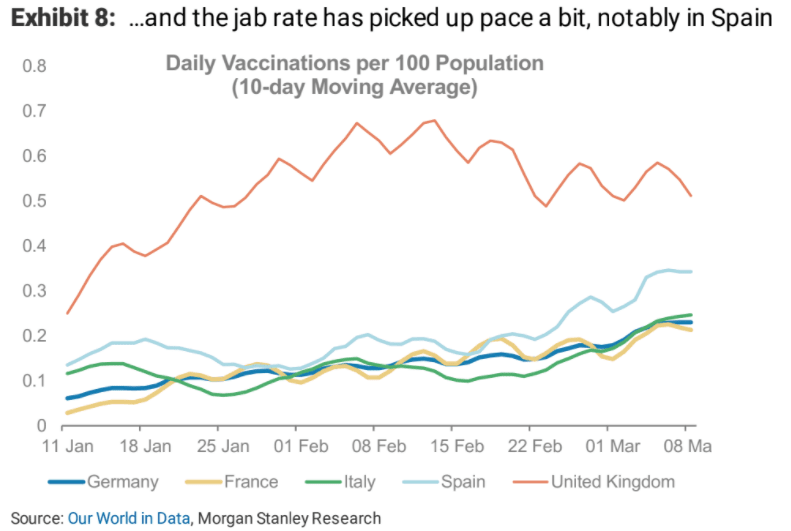 "We think much of the optimism around the UK's rapid vaccination rates and resultant re-opening strategy is now in the price for GBP," says Matthew Hornbach at Morgan Stanley.

The Pound-to-Euro exchange rate has been a particular beneficiary of the vaccine trade, given the sizeable gap between the Eurozone's vaccination programme and that carried out in the UK.

"EU countries have continued to make steady progress in increasing their vaccination rates in recent weeks, with the bloc delivering over a million doses a day as of 8 March, almost twice the rate at the start of February. Progress still significantly trails that of the UK and US, but the gap is closing," says Christopher Graham, an economist at Standard Chartered.

"With new vaccines coming online and supply expected to pick up further in the weeks ahead, it should continue to close," he adds.

But investors might soon grow their own immunity to the vaccine story, say analysts at Wall Street-headquarter investment bank JP Morgan.

"The key driver of GBP's sharp appreciation over the past couple of months - the UK's successful vaccination campaign - was starting to lose its relevance for the currency as the vaccination gap vs Developed Markets was starting to reverse," says JP Morgan Paul Meggyesi, an analyst with JP Morgan.

JP Morgan say the pace of vaccination will make little or no difference to the relative performance of the UK economy over a multi-quarter horizon as most countries will get to a position of herd-immunity soon enough, presumably towards the summer.

"GBP appears to be buoyed by the UK’s relatively swift vaccination rollout, and by the MPC ruling out near-term negative rates at its last meeting. As others catch up, its momentum may slow, so we are not yet minded to make major changes to our GBP forecasts," says Investec's Shaw.

An acceleration of the UK's vaccination programme could therefore be a bare-minimum requirement to maintain the upside impetus behind Sterling's vaccine-inspired rally.

It was reported on Tuesday that the UK is in fact due to accelerate its vaccination rollout within the next week, which could allow for Sterling's vaccine-inspired rally to extend.

"More good vaccine news is coming, I can reveal," says Tom Newton Dunn at Times Radio. "The NHS is expecting a significant increase of supply to arrive from AstraZeneca, and will roll it out from March 15."

The reporter says vaccination will increase to close to 500,000 every day from next week, up from around 2 million a week now to 3 million per week.

"To match the increase in supply, vaccine centres are being expanded and NHS stewards asked to volunteer for more shifts. Officials are cautious, but the maths suggests all over 50s (groups 1-9) may now be jabbed by the end of March - two weeks early," says Dunn.

Analysts at Nordea Bank's markets division say a key threshold any vaccination programme must achieve in order to effectively tip the course of a pandemic is to reach about 35% of the adult population.

They believe this is a milestone the UK is still likely to achieve ahead of other major countries, bestowing a potential advantage on Sterling.

"The UK will soon reach a key threshold in the vaccination process, which will allow for a quicker than anticipated re-opening," says Andreas Steno Larsen, an analyst with Nordea Markets. "The U.S. will soon follow, while continental Europe will lag behind."

Analysts at the Scanadanavian lender and investment bank have looked at Israeli data to build a template for the rest of the world, given that country's rapid rollout programme.

The data suggests to them that 35-37% of the population needs to be vaccinated before a major breakthrough is seen.

"The UK will soon hit this benchmark, while the U.S. and efficient EU countries will reach this benchmark in early April," says Larsen.

He says the major economies will therefore be without most restrictions sooner than markets anticipate.

"The UK will likely soon move towards a swift reopening, U.S. will follow around Easter, while continental Europe will follow in early May," says Larsen.

Economists at Investec do however expect a more significant pick-up in Eurozone economic activity to become evident in the third quarter of 2021 and they now forecast the bloc's annual growth to be at 4.6% in 2021 and 5.2% in 2022.

This could mean the Pound reverses from current highs to actually end the year lower than where it is now .

U.S. economic growth forecasts at Investec have been raised this month by 0.6ppts to 5.9%.

Shaw notes the recent rise in longer-term bond yields, saying it is a signal of market jitters over rising inflation in the future.

The rise in ten-year yields has been particularly notable over the course of February, resulting in periodic bouts of stock market declines.

But, "we are inclined to the view that this is overdone," says Shaw.