Global markets continue to edge lower in the face of rising bond yields, lead by those of U.S. 10-year treasuries. The rise in yields is symptomatic of an investor community that is concerned with the potential of high inflation rates in the future which will bring forward the timing of the next Federal Reserve interest rate rise.

The rise in yields raises the cost of finance through the U.S. and global economies and could pose a potential headwind to the recovery, this is understandably reflected in lower equity markets.

The Australian Dollar's correlation with risk sentiment therefore means it will struggle to find upside traction in such an environment.

However, the fundamental backdrop underpinning the Aussie currency was bolstered overnight with the release of data showing Australia's trade surplus had reached a new record, which will likely mean downside in the Australian Dollar will be limited and puts it in a good position to spring higher if global markets manage to regain an offensive footing.

It was reported by the ABS on Thursday that Australia's trade surplus in goods and services hit A$10.1BN in January, a fresh record high. This represents a A$3.0BN improvement on December, which was revised up from A$6.9BN to A$7.1BN.

The market consensus expectation was for a reading of A$7.5BN. 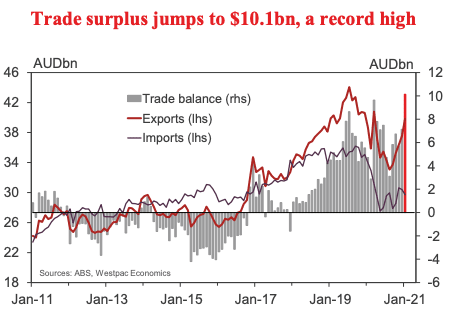 The surplus in what is effectively Australia's bank balance with the rest of the world is being driven by the country's trade surplus, and this is only likely to have improved given Thursday's trade balance numbers.

"Australia’s trade account has now been in surplus for 37 consecutive months – each month through 2018, 2019 and 2020, as well as the opening month of 2021," says Andrew Hanlan, Senior Economist at Westpac. "What a way to start the New Year – a fresh record high for the trade surplus, in dollar terms, eclipsing the A$9.6BN last March."

The ABS says the amount earned on exports increased courtesy of higher commodity prices, which rose by 7.6% in USD terms or 4.8% in AUD terms. 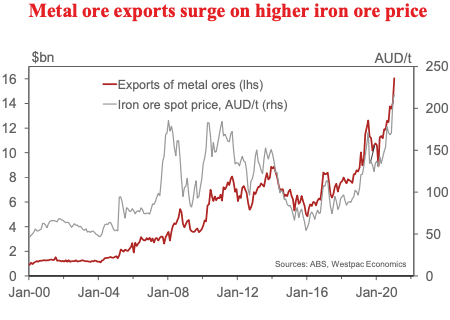 "A stand-out has been the spike in the iron ore price, up on strong demand from China and constrained supply," says Hanlan.

This lift in commodity prices extends the trend evident over the past year, with the country's terms of trade increasing by 7.3% in
2020. 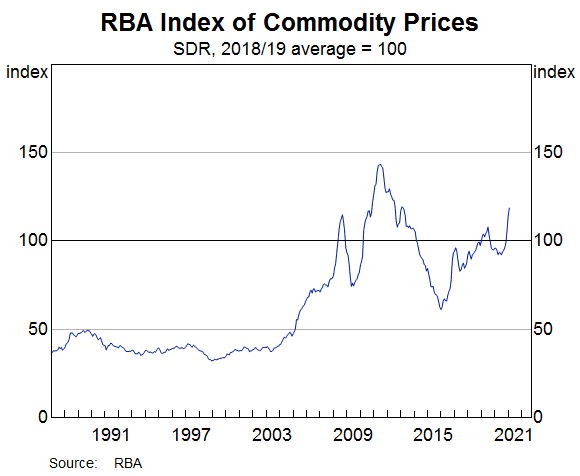 The Australian Dollar was one of the best performing major currency of 2020 with gains appearing to correlate with an uninterrupted rally in the value of bulk iron ore futures, confirming the importance of this commodity to Aussie exchange rate dynamics.

Stimulus measures in China have resulted in huge demand for raw materials as authorities build themselves out of the covid-induced slump of early 2020 and as a result of the longer-term quest for full self sufficiency in economic terms.

But a more global recovery could get underway in 2021 as the world shakes off the effects of the covid crisis.

Foreign exchange strategists at UBS recently told clients they are holding a constructive view of commodity-linked currencies, including the Aussie.

"Higher US yields on the back of larger fiscal deficits and stronger economic activity is likely to come with higher real asset prices as well, and this includes commodity prices. We think this will add fuel to commodity currencies, not just from a terms-of-trade angle, but also from a risk sentiment perspective that comes with stronger economic activity and buoyant risk assets," says Thomas Flurry, a foreign exchange strategist at UBS.

Australian inflation data for the third quarter has come in hot and markets have bid up the Australian Dollar as they anticipate a response from the RBA.

GBP/AUD in short-term downtrend with no signs yet of reversal but a major support level could underpin current prices.

GBP/AUD under pressure near three-month lows but eyes major chart supports between 1.83, 1.8250.