Foreign exchange analysts at global financial services provider Commerzbank have told clients at the start of 2021 that the Australian Dollar faces near-term headwinds, but a resumption of the appreciation trend that characterised 2020 will resume over the medium-term.

The Frankfurt-based bank says the recent strength of the Australian dollar - a strong rally through the second-half of 2020 made it the year's second-best performing G10 currency - was unexpected.

The currency has benefited of late from China's economic recovery and the confident mood on the markets which have in turn created a strong demand for commodities, of which Australia is generously bestowed.

However, the near-term risk to the Aussie Dollar's rally could in fact lie with developments in the U.S. where expectations for U.S. Federal Reserve monetary policy continue to evolve.

"For the AUD, the current taper discussion in the U.S., which should support the U.S. dollar in the first half of the year, is a risk in the near term," says Antje Praefcke, FX and EM Analyst at Commerzbank. 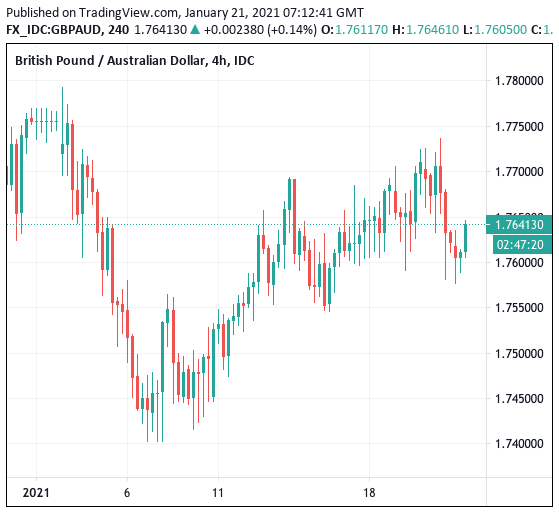 Stock markets endured a rare pull-back and the Dollar went higher in the week starting January 11 as the yield paid on U.S. bonds started to rise once more, suggesting investors were starting to demand a greater return on holding U.S. bonds in anticipation of higher inflation in the future.

Markets are increasingly expecting the new generous fiscal policy being promoted by U.S. President Joe Biden to generate strong inflation and the rise in U.S. yields signalled investors are wary of higher interest rates at the Federal Reserve occurring sooner than they had anticipated.

This would act as a headwind to global growth and commodity prices, which in turn could impact negatively on Australia's export sector, and its currency.

"We now no longer expect an unbroken uptrend in the AUD. Due to the constellation in the U.S. Congress, the chances have increased that the new U.S. President Joe Biden will be able to launch a big fiscal package that will give an additional boost to the U.S. economy, which has come through the crisis quite decently so far," says Praefcke.

The Australian Dollar fell back from multi-month highs against a host of currencies in the face of rising U.S. bond yields.

But, Praefcke says these concerns for higher U.S. yields are unlikely to be confirmed in the end and the currency can extend higher over coming months.

"We therefore expect the AUD to resume its moderate uptrend from the second half of the year onwards," says the analyst.

Commerzbank expect the U.S. Fed to fight back against rising yields, utilising a new strategy of average inflation targeting.

"Against the background of an economic recovery, inflation expectations in the USA will rise accordingly, whereas yields in the USA will not rise permanently. Accordingly, hopes for a rising real interest rate in the U.S. will not be realised, which will make the USD and U.S. assets less attractive again and cause the USD to depreciate again," explains Praefcke.

The Aussie Dollar will meanwhile continue to benefit from the global economic recovery in the wake of increasing vaccinations worldwide and resume its upward trend accordingly.

However, the uptrend that will characterise 2021 is expected by Commerzbank to ultimately be a moderate one and therefore will unlikely match the strong appreciation trend seen in the second half of 2020.

The recovery in Australia's labour market is expected to be slow and therefore wages and inflation will also rise only slowly.

"The RBA therefore reiterated in December that it will remain expansionary for a very long time and will become more expansionary again if necessary. It also sees too strong an appreciation of the domestic currency as a risk to the economic recovery and the inflation trend. It is therefore quite possible that it will intervene verbally to dampen the appreciation if the AUD appreciates too much to its liking. Consequently, we expect only a moderate uptrend in the AUD from the second half of the year and in the coming year," says Praefcke.

Utilising Commerzbank's GBP/USD forecasts, the cross-rate of the GBP/AUD is therefore forecast at ~1.83 and ~1.80 for the above timeframes.