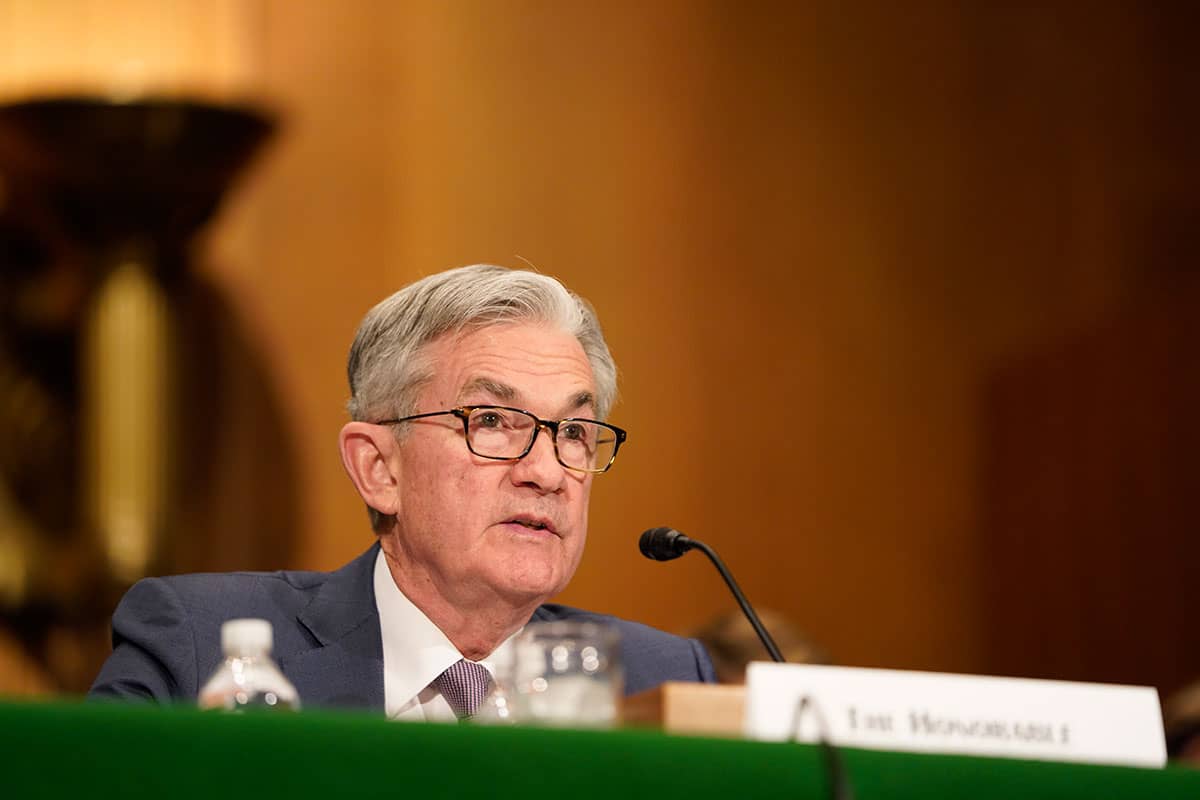 The U.S. Dollar rally of recent days is being attributed by analysts we follow to a rise in expectations that the U.S. Federal Reserve will have to start withdrawing support to the economy at some point in 2021.

However, the gains could ultimately fizzle out should the theme start to fade, which could happen if Fed policy members actively maintain their sanguine approach to the outlook.

"A key theme for 2021, especially later in the year, is the Fed’s policy normalisation plan once we see a significant economic recovery when the vaccination process has come such a long way that restrictions can be lifted permanently," says Mikael Olai Milhøj, Senior Analyst at Danske Bank. 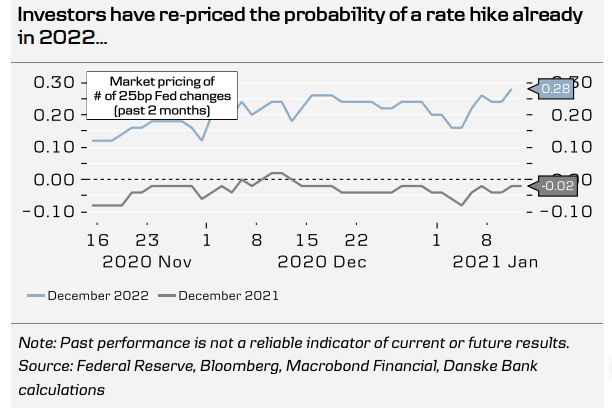 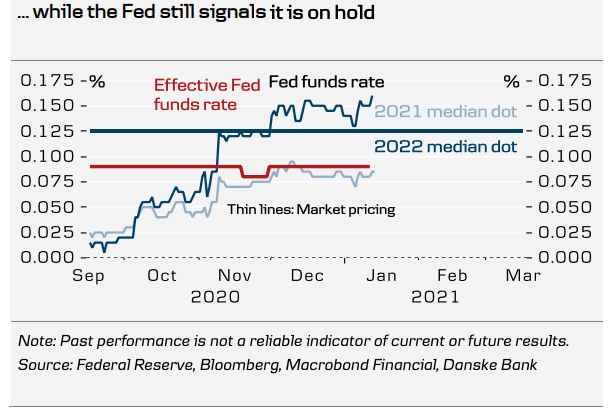 While expectations for an actual move at the Federal Reserve in 2021 is low, investors are preparing for the eventuality that the Fed starts discussions on easing back on the pace of quantitative easing.

The expectation is founded on fears that inflation will start moving higher again thanks to the Fed's current policies. However, the Fed has been in the market for some time, the 'game changer' appears to be the expectation for generous handouts from the Biden administration, which is tipped to deliver a $2TRN stimulus programme, the lion's share of which will end up in the pocket of U.S. consumers.

Uncomfortably high inflation is typically combatted by the withdrawal of monetary support at the Fed, in a process known as 'tapering'.

But Danske Bank says the Fed will continue to keep expectations for tapering as low as possible and maintain a relaxed stance to inflation, in order to avoid any undue tightening in financial conditions and triggering an unwanted market meltdown.

One way of achieving this is by emphasising that they will be comfortable with any overshoot in inflation above the 2.0% target, provided it is temporary.

"We believe the Fed wants even higher inflation expectations, which remain on the low side when looking at market-based as well as survey-based gauges," says Milhøj.

Market-based gauges for future inflation have risen significantly this week with the 10-year breakeven inflation now trading at 2.07%. 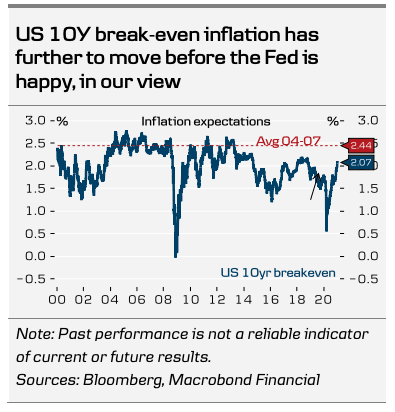 Milhøj points out however that this is still 13bp lower than the post Financial Crisis peak in 2018 at around 2.20% even with the current still very shallow Fed pricing.

It is also 43bp lower than the 2.50% level in the 'good years' before the financial crisis

U.S. inflation rose 0.4% in December alone, taking the annualised rate of consumer price growth up to 1.4%.

The more important core rate of inflation, which ignores volatile prices of energy, food and regulated items like tobacco and alcohol, rose by a lesser 0.1% but left sitting even higher than the headline measure and at some 1.6%.

Rising inflation expectations were in turn reflected in a rise in U.S. bond yields as investors demanded greater future returns to compensate for any erosion to their investments caused by inflation over coming years.

A notable side effect of rising U.S. bond yields is a better bid U.S. Dollar, which tends to gain as foreign investors seek out higher yielding assets.

The path forward for equities, bonds and the U.S. Dollar in 2021 therefore could well lie with the 'taper' theme.

This could then be followed by a rate hike 6-12 months later in the second half of 2023.

Danske Bank expects the Fed to remain cautious, but that the scale of the looming economic recovery will be sizeable.

"The recovery after COVID-19 is likely to be very different from what we saw after the financial crisis. Both the fiscal and monetary policy responses have
been much more aggressive, the economy does not need to adjust to an economic imbalance and the experience from 2020 was that economic activity can return quite quickly when the fear of COVID-19 declines and restrictions are lifted," says Milhøj.

"We are very optimistic about the macro outlook, especially in H2 21 and onwards," he adds Milhøj.