Australian Dollars were bought widely in the final session of the week despite another economic assault from major trading partner China, which has imposed trade tariffs of more than 100% on imports of Australian wine.

Beijing has also targeted Australian coal, barley, timber, copper, lobster and sugar in an apparent retaliation for Prime Minister Scott Morrison's calls for accountability over the coronavirus, as well his decision to ban Huawei's participation in development of the national 5G infrastructure.

But analysts say that so long as imports of Australia's main export iron ore remain unscathed then Australian Dollar should continue to shrug off the hostilities and take its cues instead from sentiment in global markets.

"A$ remains a popular proxy for risk appetite, so in a week where the MSCI World Index hit record highs, the A$ vibe was upbeat. Commodities continue to lend support, with our daily measure of Australia’s commodity export prices edging up to 7 year highs," says Sean Callow, a Syndey-based strategist at Westpac. "A somewhat fragile USD in the week ahead should help AUD/USD take out 0.7414 resistance, with dips perhaps limited to the mid-0.72 area."

AUD/USD was trading comfortably above the 0.7350 level on Friday and tipped for  break above 0.7414 over the coming week, which Westpac sees paving the way for the Aussie to meet its year-end forecast of 0.75 in December. 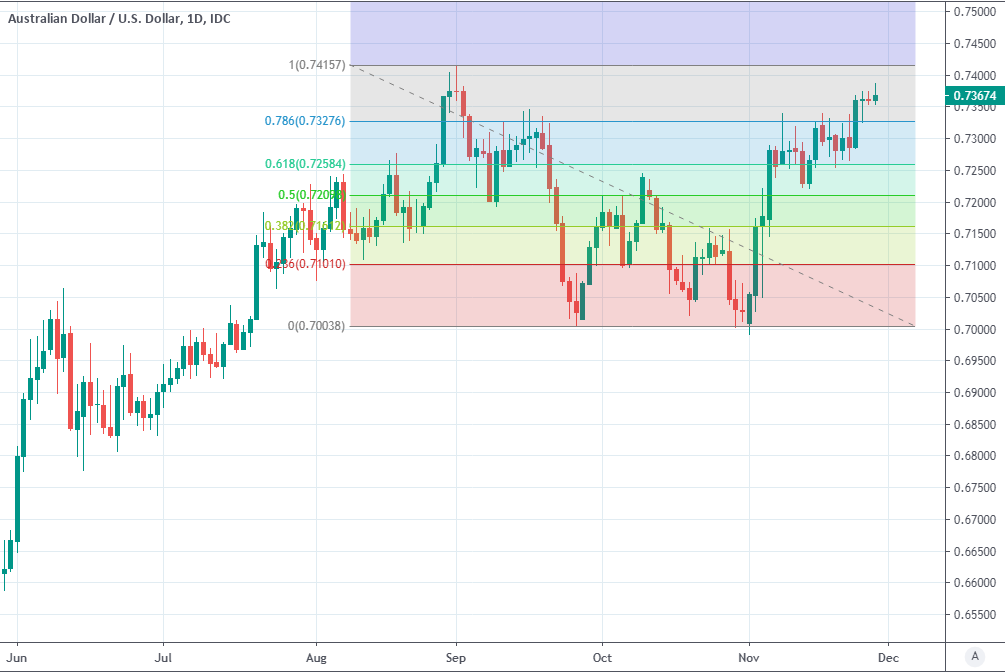 Above: AUD/USD at daily intervals with Fibonacci retracements of September correction lower.

Australia's exposure to China's recovering economy, gained in no small part through surging iron ore prices, gives it a positive correlation with global stocks that hit new highs this week and a strong sensitivity to the mood of investors, although domestic and international economic factors will also feature strongly as an influence next week.

"AUD/USD is around equilibrium relative to the level implied by real AU-US two-year swap rate differentials. But AUD/USD is undervalued compared to AU/US terms of trade trend and iron ore prices," says Elias Haddad, a strategist at Commonwealth Bank of Australia. "Souring diplomatic ties between China and Australia is an important downside risk for AUD. However, as long as Australia’s largest export to China, iron ore, is unscathed the fundamental AUD/USD uptrend is intact."

Tuesday's Reserve Bank of Australia (RBA) decision offers Governor Philip Lowe another opportunity to remark on exchange rates as well as recent strong economic data, but it will otherwise play second fiddle to the first estimate of third-quarter GDP data and other figures from elsewhere in the world that impact the mood of investors.

"AUD/USD steady to firm in quiet trade," says Patrick Bennett, a strategist at CIBC Capital Markets. "Next week is a busy one for data, with Q3 GDP, trade and retail sales on the slate. The RBA also meets Tuesday and to all expectation will leave policy unchanged. Of note will be comment about the recent very strong employment report."

Consensus is looking for Australia's economy to have grown at a quarter-on-quarter pace of 2.3% in the three months to the end of September, only partially backfilling the -7% second quarter hole, although some local economists including those at ANZ have higher hopes than that. The data is out at 12:30 London time on Wednesday and is the highlight of the economic week ahead of next Friday's U.S. nonfarm payrolls report.

"GDP is set to post a solid bounce. Our preliminary estimate is for a gain of 3.2% q/q," says David Plank, head of Australian economics at ANZ. "Of course, the gain needs to be set against the 7% q/q fall in Q2. Even with this bounce the level of GDP will still be short of where it was at the end of 2019. But activity is recovering more strongly than we thought...with another solid gain likely in Q4 and the growth outlook looking positive for 2021, GDP could be back to its pre-pandemic level sometime in 2021." 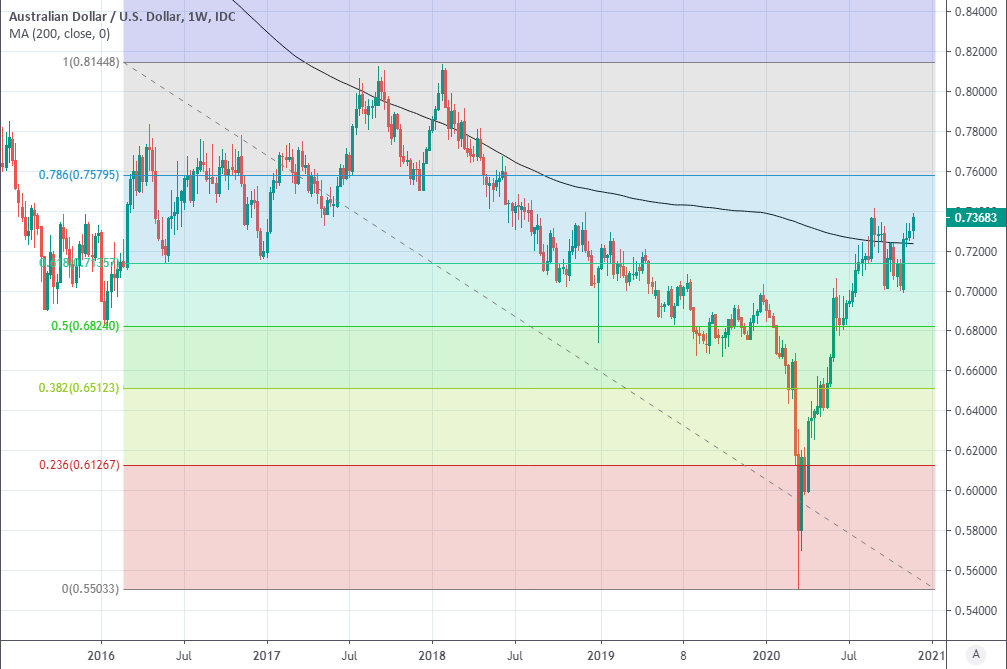 Above: AUD/USD at weekly intervals with Fibonacci retracements of 2018 downtrend.