The Australian Dollar fell at the start of the new week led by the Chinese Yuan but buoyant stock markets, bearish investor sentiment toward the U.S. Dollar and domestic jobs figures are among the factors that are expected to drive an anticipated outperformance from here.

Australia’s Dollar fell at the open on Sunday and remained under pressure in the early hours amid steep losses in Chinese exchange rates, which mounted when domestic regulators scrapped a rule requiring local lenders to set aside capital when dealing in Yuan forwards on behalf of clients.

“The removal of the 20% requirement will allow market participants to short CNH. The rule change comes after the CNH rose to its highest level since April 2019,” says Kim Mundy, a strategist at Commonwealth Bank of Australia.

The Australian Dollar has a strong positive correlation with China's Yuan owing to the close trading relationship between the two countries. The outlook for China is therefore often tied to the outlook of Australia, with the Aussie Dollar considered by some foreign exchange analysts to be a more liquid proxy for exposure to China.

China’s currency has rallied strongly since late July, notably against the U.S. Dollar but in moves that have been felt in all corners of the major exchange rate sphere from down-under, to North America and Europe.

“The yuan has just had its strongest quarter in 12 years. When a similar move was made in September 2017, it slumped about 2.5% over the following three weeks,” says David Plank, head of Australian economics at ANZ. 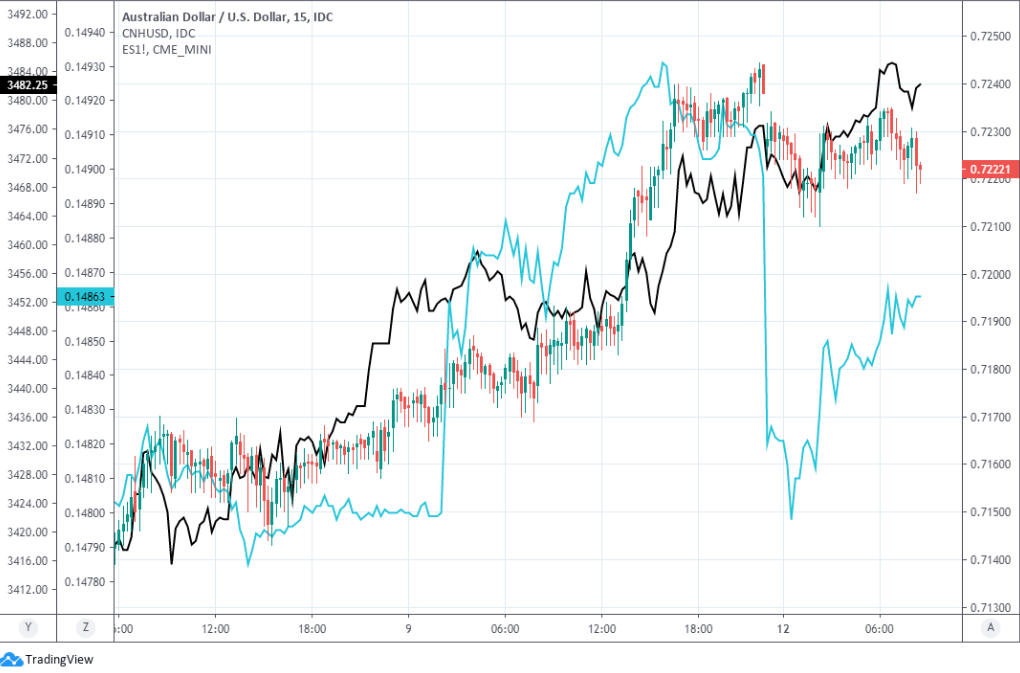 Analysts say the banking rule change is likely an attempt to put a lid on the local currency's appreciation, however questions are being asked about just how effectivene this development will prove to be.

"Past experiences with the changes in the reserve margin requirement suggests that while it may stabilize USD/CNY spot somewhat over the near term, it has limited impact on altering the prevailing directional bias of USD/CNY over the medium to longer term," says Heng Koon How, Head of Markets Strategy at UOB in Singapore. "All the prevailing macroeconomic and market drivers remain positive for the CNY against the USD. These are the on-going stable and strong recovery in China’s economy, overwhelming weak USD backdrop, stable monetary policy for the PBoC as well as attractive yield advantage for the CNY."

While the Aussie Dollar has endured a soft start to the week, analysts maintain a view that the outlook remains ultimately supportive with investor risk appetite elevated and markets as bearish in its U.S. Dollar outlook as ever before.

“Two events are likely to shape FX market performance into year-end: the US election and the output from phase three trials for the leading coronavirus vaccines. Although there are uncertainties around both, the risks are skewed toward USD weakness, and we see relatively low odds of the most Dollar-positive outcome—a win by Mr. Trump combined with a meaningful vaccine delay,” says Zach Pandl, global co-head of foreign exchange strategy at Goldman Sachs. "To be sure, there are important risks: we are most uncertain about the length of the vote count (especially for the Senate) and the equity market reaction to a 'blue wave'. But the wide margin in current polls reduces the risk of a delayed election result, and the prospect for near-term vaccine breakthroughs may provide a backstop for risky assets."

Opinion polls shifted further in favour of Democratic Party presidential candidate Joe Biden last week, both at the national level as well as in key swing states, leading to speculation about the prospect of a 'clean sweep' for the opposition party that gives them control over the Republican-held Senate.

Many see this leading to a larger post-election stimulus than might otherwise be the case and an end to the trade tensions that characterised the first Trump presidency, which is a boon for the global economy that indicates lesser safe-haven demand for the U.S. Dollar over the coming years.

“We therefore see the risk/reward as leaning strongly Dollar-negative into year-end, and are issuing two new USD short recommendations,” says Goldman’s Pandl, who’s recommended that clients sell the U.S. Dollar in exchange for an equally-weighted basket of Euros, Canadian Dollars and Australian Dollars.

A stronger polling lead for the Democrats is thought to indicate that a contested election will be less likely, which is positive for risk appetite, stock and commodity markets that the Aussie has a strong positive relationship with.

The Aussie will be sensitive this week to developments in Washington where President Donald Trump and lawmakers from both sides of Congress are still negotiating an emergency funding package for households. So far efforts have been in vain but any surprise progress would likely lift the Australian Dollar.

The Australian Dollar will be tested mid-week by August jobs data that will lay bare the cost of a second draconian lockdown in Victoria, the country’s second largest state economy, although analysts are divided on what to expect. 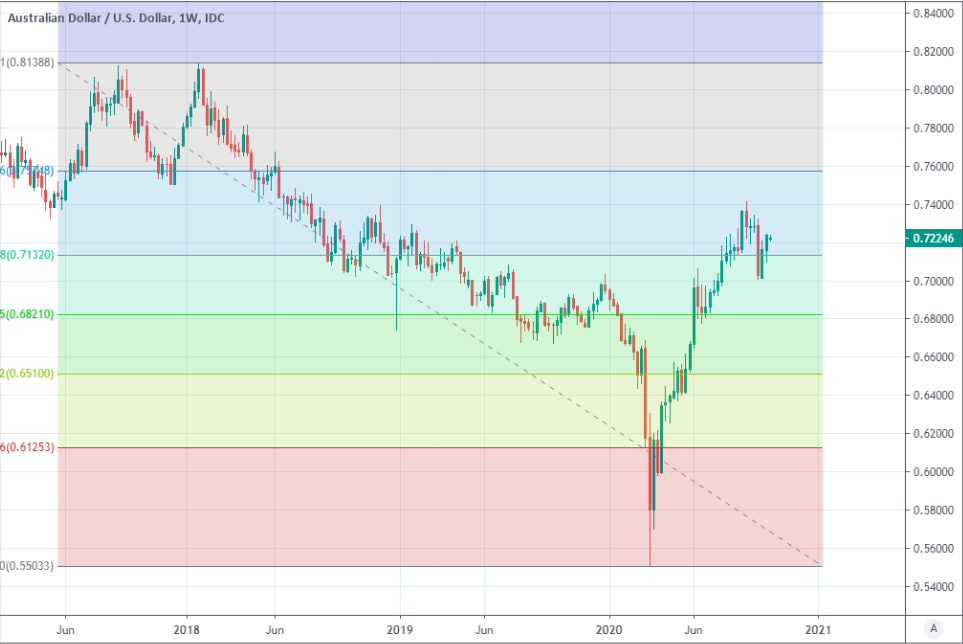 Above: AUD/USD rate shown at weekly intervals with Fibonacci retracements of 2018 downtrend.

“RBA Governor Lowe is scheduled to speak at an investment conference (Wednesday). We expect the September employment report (Thursday) to reflect some further softening driven largely by VIC’s return to harsher lockdown restrictions from the beginning of August. Adjusting  weekly  payrolls for  various  lags  and  seasonal  effects  suggest we could even see a drop in employment of over 100k,” says Alvin Tan, a strategist at RBC Capital Markets.

The data is out at 01:30 London time on Thursday and will be scrutinised closely not least of all because of a recent step-up in market expectations for further interest rate cuts and policy support from the Reserve Bank of Australia, which said in a statement last week that it continues to contemplate how it might support the economic recovery.

Some see scope for an upside surprise and for Aussie outperformance.

“The latest policy statement aimed at stressing the centrality of the jobs market for future policy decisions rather than signalling an imminent cut. So next week will likely be key in directing monetary expectations,” says Francesco Pesole, a strategist at ING. “We suspect that consensus is too much on the pessimistic side (expecting the unemployment rate to edge above 7%), and we see scope for an upside surprise...We see potential for some scale-down in the market’s dovish expectations around the RBA and therefore see room for AUD idiosyncratic outperformance.”