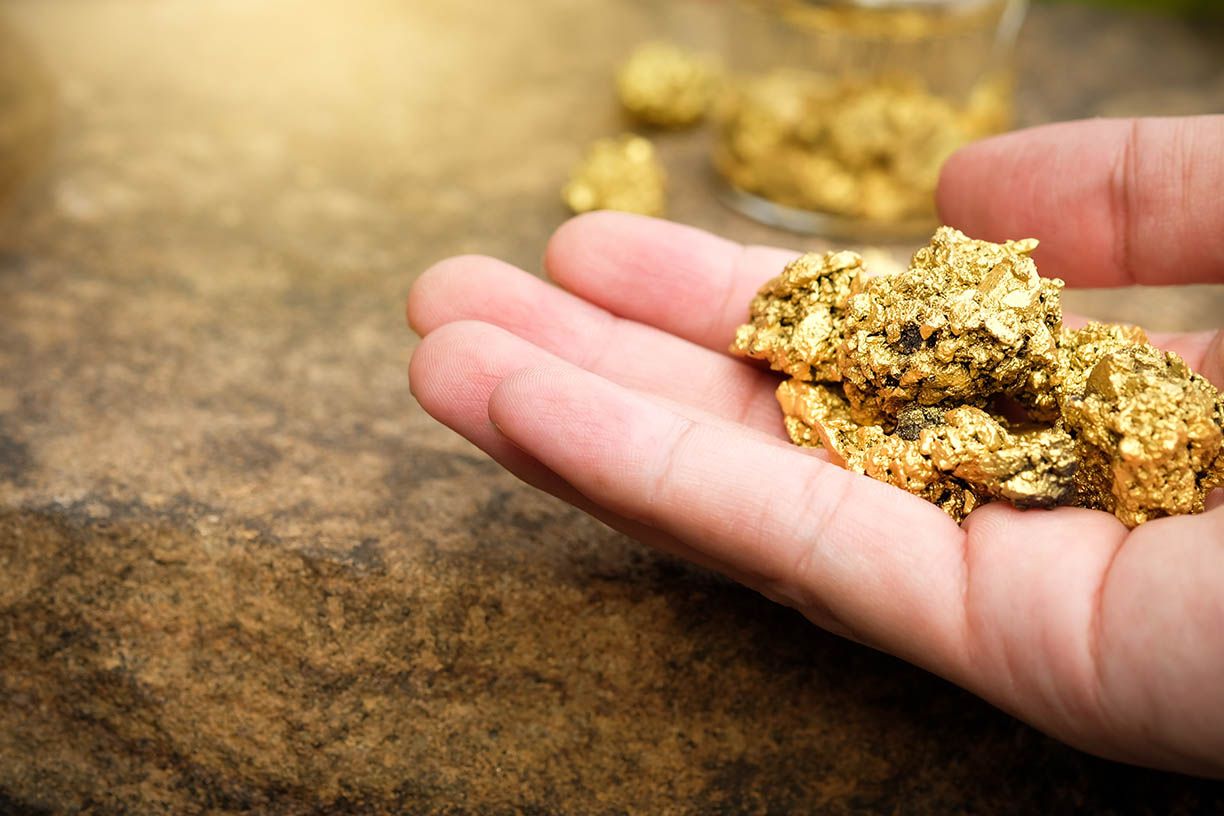 Gold has sustained a move above $2,000 this week and in the process kept the Aussie from ceding a technical support level around 0.7180to the U.S. Dollar, although Thursday's price action among major currencies indicates that sentiment toward the greenback might be more important for the outlook.

"Australia is the third largest gold producer after China and Russia. We estimate that gold is now Australia’s fourth largest export. Given the importance, the elevated gold price is a positive for AUD/USD," says Kim Mundy, a strategist at Commonwealth Bank of Australia. 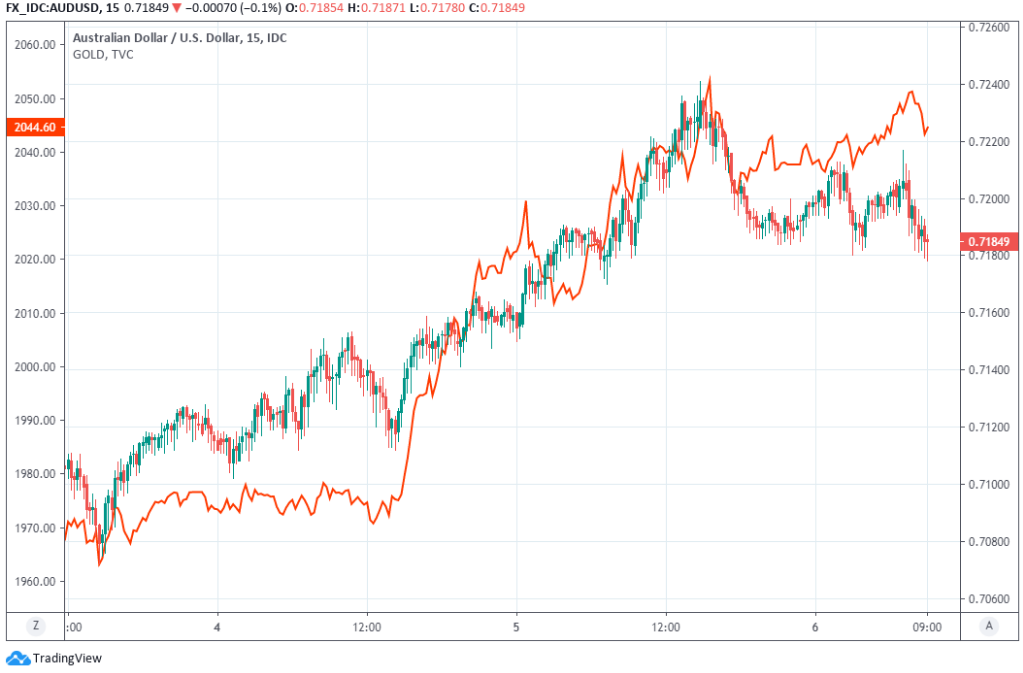 Commodity prices have been a boon for Australian exchange rates even as a resurgent coronavirus more than doubles the national total for infections amid a second wave that's grown larger in size and been more persistent than the first, prompting officials to return vast parts of the domestic economy to 'lockdown'.

But the Dollar Index was steadying in Europe Thursday as the U.S. currency turned higher against all major counterparts after having fallen to more-than two-year lows in the prior session, even as precious metals prices crept to new highs, in what could be an ominous sign for the Aussie.

Gold is not the only bright spot for the AUD. The price of iron ore – Australia’s largest commodity export – lifted to the highest level since July 2019 earlier this week. Oil prices have also recovered. These are all Australia’s key commodity exports and support AUD. Indeed, recent strength in AUD/USD highlights how the external environment is more important than the domestic," Mundy says.

Technical resistance between 0.7180 and 0.72 and the length of time taken to overcome stoked a 'bearish divergence' on the AUD/USD chart last month and led some analysts to warn of a correction lower heading into August.

However, and aided by an investor exodus from an unravelling U.S. Dollar, gold prices had prevented AUD/USD from falling below 0.7180 and in the process all but ruled out the envisaged correction. Until Thursday, when the Dollar was stabilising early in the European session in what could be negative omen for precious metals and the Aussie. 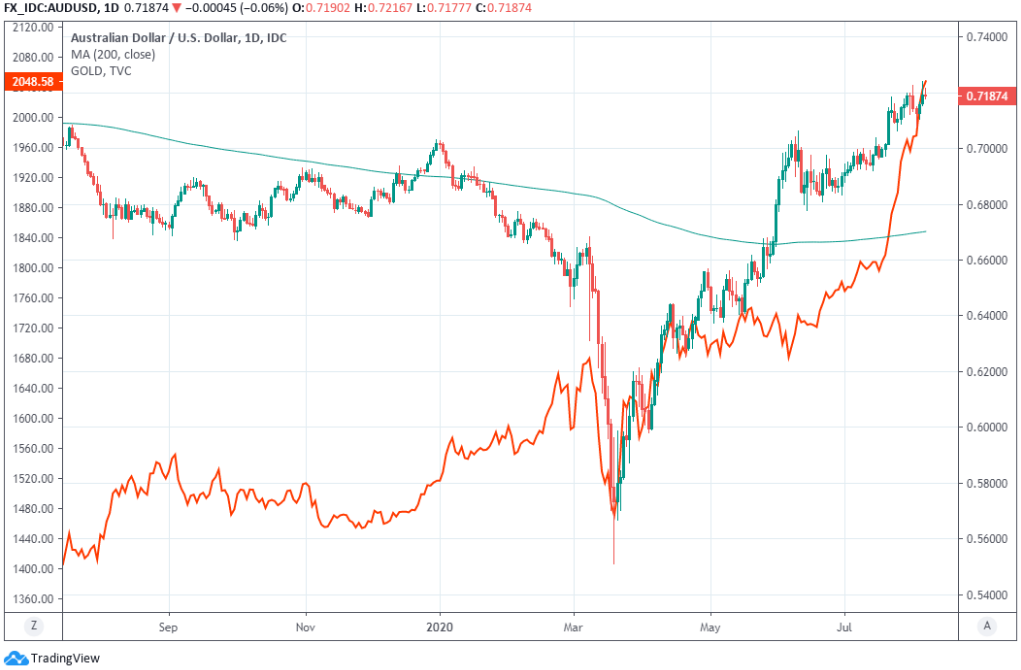 "We remain wary of further rangebound trading or even a deeper setback. With this in mind, support is seen initially at .7116/06, beneath which would reinforce the negative tone for a retest of .7077/63. Whilst we would look for a fresh attempt to hold here a break would instead mark a near-term “head & shoulders” top to warn of a deeper corrective setback," says David Sneddon, global head of technical analysis at Credit Suisse.

Credit Suisse forecasts an AUD/USD rate of 0.72 for the coming months, although a steadying U.S. Dollar might come as a headwind for the Aussie.

Australia's commodity Dollar has always been sensitive to the movements of its U.S. counterpart but this could be doubly the case up ahead given the recent lift from gold and aversion of precious metals to a climbing greenback.

Much like other commodities, gold is priced in Dollars so becomes more expensive for non-U.S. buyers when the American currency climbs.

However, Thursday's tentative Dollar turnaround might need to be more than just a flash in the pan to alter the multi-month outlook, which has got the bulk of the analyst community looking for either a sideways consolidation into Autumn or in some cases, an advance further above 0.70 into year-end.

"Gold prices continue to dominate market attention after the remarkable advance of 75 dollars per ounce over the last few sessions. The USD has lurched weaker again and is helping to feed a rise in prices," says John Hardy, head of FX strategy at Saxo Bank. "AUDUSD – an excellent barometer for the broader US dollar is this pair, as AUD was one of the first DM currencies, together with CAD yesterday, to push at a new local high." 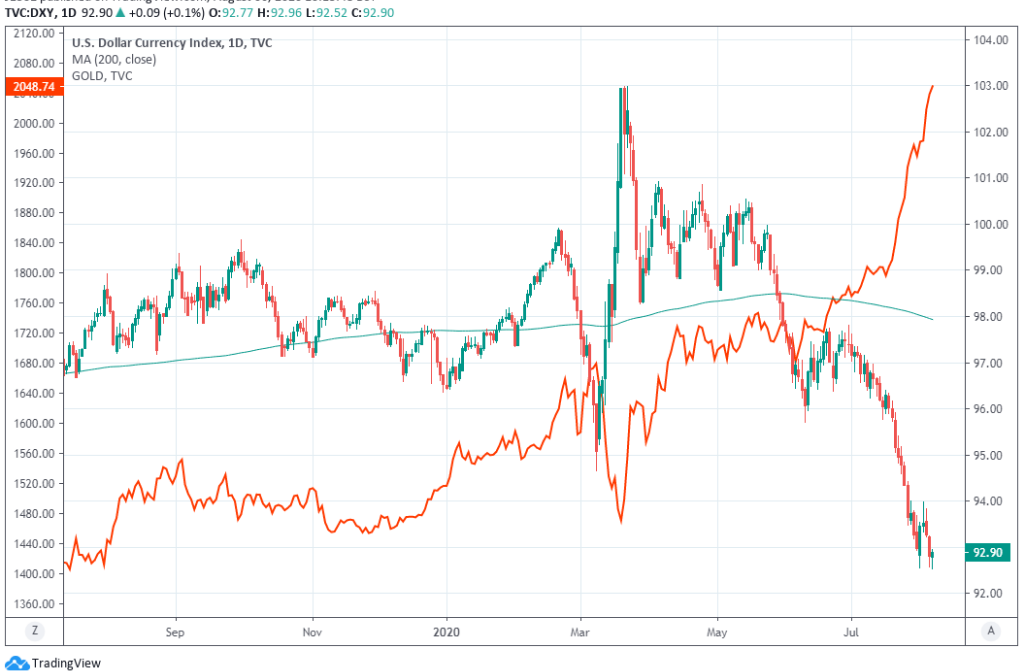