The Australian Dollar has recorded three successive days of advances over the British Pound this week and looks on target to test its 2020 best, helped by an ongoing recovery in global commodity prices and better than expected employment statistics out of Australia.

We had reported at the start of the week the potential for an extension of last week's recovery in the Pound-to-Australian Dollar exchange rate, with analyst Richard Perry of Hantec Markets saying the exchange rate was shaping up to be a potential bullish prospect.

However, the three days of losses by Sterling at the hands of the Aussie appears to have negated last week's rally and served as a reminder that the trend in GBP/AUD since April has been overwhelmingly one of decline; and it is still too soon to push back against this force.

The Relative Strength Index - a measure of momentum - is below 50 at 39.17 which confirms momentum is comfortably negative, the exchange rate meanwhile sits below its 50 day moving average which is another indicator that the path of least resistance is lower.

We would look for GBP/AUD to slip back above the 50 day Moving Average - currently at 1.8370 - as a signal of a potential turn in direction.

For now, we would expect the GBP/AUD to retarget the 2020 low at 1.7868 noting this to be a decent level of support: the exchange rate bounced here on June 30 and then again on July 07. Clearly there is some buying interest in Sterling around these levels and therefore we could see another bounce over coming days. 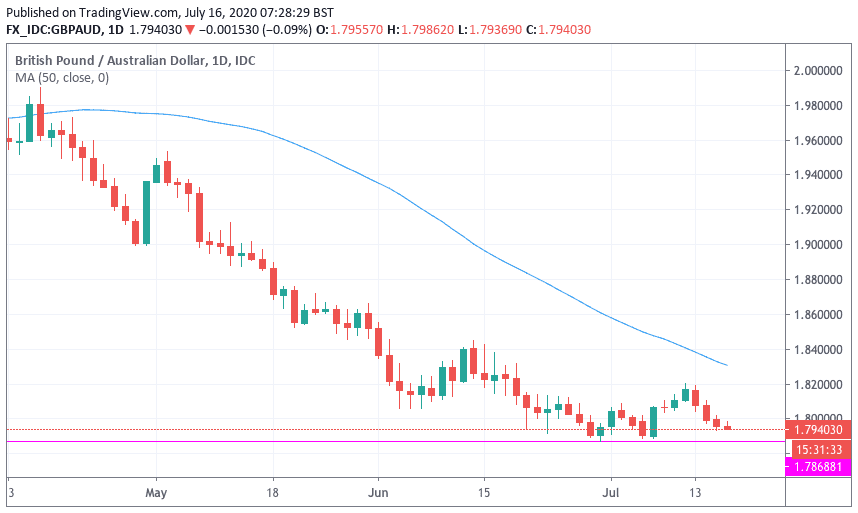 However, a break below this point would probably result in an acceleration of losses as is so often the case when support levels give way.

The Australian Dollar retains a buoyant tone on global foreign exchange markets courtesy of an ongoing rally in world resource prices with copper, iron ore and coal prices all on the rise thanks to a strong appetite from a recovering China.

As long as these commodities are moving higher expect Australia's terms of trade to remain supportive of fundamental Australian Dollar strength.

The domestic picture does however look to be less constructive given that covid-19 cases in the state of Victoria reached a record high today with 317 new cases being reported. Twenty-eight of the new cases are connected to known outbreaks, while 289 are under investigation.

The state has also recorded another two coronavirus deaths.

Victorian Premier Daniel Andrews says stay at home restrictions are only a week old, and "it will take some time to bring stability to the numbers and start to see a pattern where they are driven down".

The developments come after official figures showed Australia's employment rose by 211k in June following a revised 264k fall in May (previously reported as -228k). This makes for a notable beat on the 100K the market was looking for, and could explain some of the Australian Dollar's resilience in the face of softer global equity markets on Thursday.

"The six week stage 3 lockdown for metropolitan Victoria complicates the outlook for Australian employment. We now expect a situation where employment falls in Victoria in July and August but rises modestly in the rest of Australia. The net impact is likely to see national employment track sideways over the next two months," says Joseph Capurso, Head of International Economics at Commonwealth Bank of Australia.

The participation rate jumped to 64.0%, which meant the unemployment rate increased to 7.4% despite the job gains.

The outlook for Australia's jobs market - as is the case globally - remains challenging: "An initial jump in employment was always going to happen with the reopening of the economy –it’s a lot easier to regain the first quarter of lost jobs than the remaining three quarters when you shut down and then reopen large parts of the economy," says Gareth Aird, Head of Australian Economics at Commonwealth Bank of Australia.

"Metropolitan Melbourne and Mitchell Shire together account for an estimated 21% of national employment, so the new lockdown will set the labour market recovery back in Q3," says Catherine Birch, Senior Economist at ANZ Bank. "While Melbourne workers will feel the worst of it, regional Victoria will also be affected, and the nationwide recovery is likely be slower, as consumer and business confidence is undermined, demand is more fragile and businesses more cautious about hiring."

However, there is not yet anything in the domestic economic data to suggest the Reserve Bank of Australia will increase its aid to the economy, which foreign exchange textbooks say would be supportive of the Aussie Dollar. Contrast this to the Bank of England which will almost certainly look to boost quantitative easing once more and we can identify another fundamental reason to expect further GBP/AUD weakness in the future.