The British Pound's ongoing sell-off against the Australian Dollar means the GBP/AUD pair is now recording a loss for 2020, marking a significant shift in fortunes for an exchange rate which had been riding at its strongest levels since 2016 just a month-and-a-half earlier.

The Pound-to-Australian Dollar exchange rate rose to a peak at 2.06 on April 02 (we exclude two 'flash crash' events recorded earlier in the month), before capitulating back towards current levels at 1.8710.

The declines come amidst a broad-based recovery in the Australian Dollar which remains highly correlated to the fortunes of global stock markets, while the Pound appears to be suffering a now-familiar bout of nerves relating to Brexit, as EU-UK trade negotiations appear to have reached stalemate. 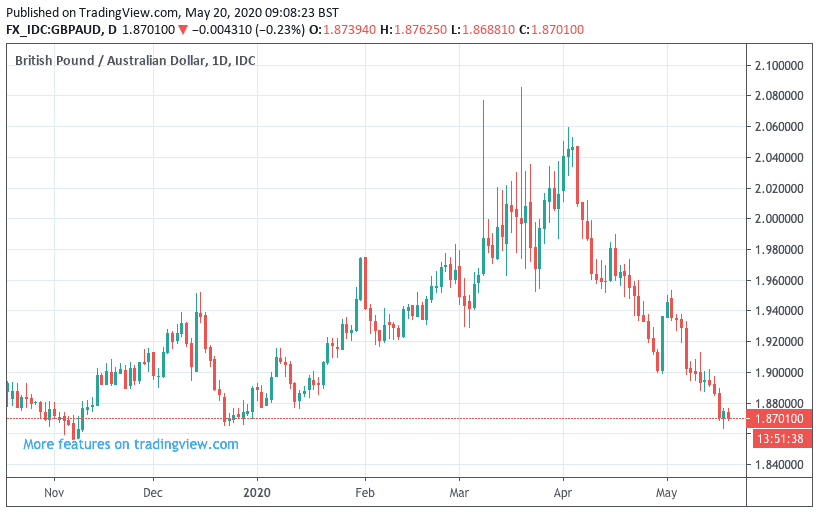 The decline in GBP/AUD has paused temporarily as the heat has come out of global stock markets over the course of the past 24 hours, applying the brakes to the Aussie Dollar's ambitions, at least temporarily.

Indeed, GBP/AUD remains in a downtrend that we expect will likely extend in the short-term.

The pause in the GBP/AUD sell-off comes as investors are left to chew over the implications of a potential trade spat between China and Australia, as politics surrounding the covid-19 crisis spill into the realm of economics.

"The good performance of the commodity currencies nonetheless was significant, particularly because trade tensions between China and Australia are heating up. China has already barred meat imports from four Australian slaughterhouses for “technical” reasons, and Monday announced import duties on Australian barley," says Marshall Gittler, Head of Investment Research at BDSwiss Group.

Bloomberg reports Chinese officials have drawn up a list of other goods that could be subject to various restrictions, such as stricter quality checks, anti-dumping probes, tariffs or customs delays.

"The trouble and strife is because of Australian calls for more investigation into the origin of the pandemic, which of course is embarrassing to the Chinese government. Spats like this are one reason why the renminbi isn’t a major world reserve currency: politics so quickly spills over into economics," says Gittler.

China is far and away Australia's main trading partner, accounting for the lion's share of demand for Australia's iron ore, coal, natural gas and other raw materials. The extraordinary economic boom in China over the past 20 years has in turn made Australia incredibly rich, and China knows this.

"Australia’s exports to China are the second-highest in the world as a percent of GDP, and that doesn’t take into account the important tourist trade or education," points out Gittler. 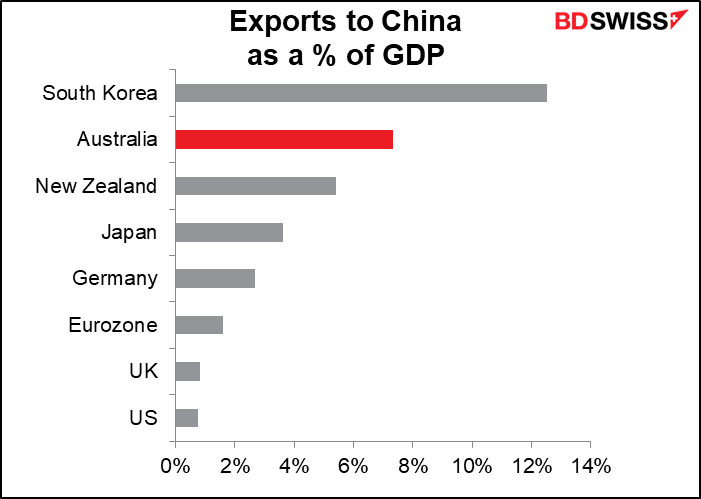 China is sending an unambiguous political signal to Australia by tinkering with their trade settings and this could well put a cap on the Aussie Dollar's potential for appreciation.

Indeed, the Australian-to-U.S. Dollar exchange rate looks unable to crack above the 0.6590 line, and we wonder whether this technical resistance, combined with a broad-based setback to global investor sentiment over the course of the past 24 hours, will put a handbrake on the currency's ambitions. 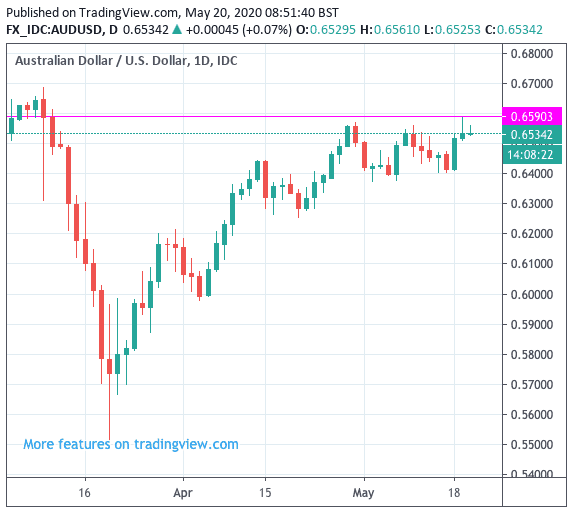 "For now, our view is for the Moderna-driven positivity to be short-lived, and the range of geopolitical issues that remain, Sino-US tensions and Chinese bans on Australian exports, are negative for the AUD," says Terence Wu, FX Strategist at OCBC Bank.

Wu prefers to look for opportunities to sell the Australian Dollar on any strength against the U.S. Dollar, with AUD/USD at 0.6600 looking attractive, targeting 0.6400 on a multi-session horizon.

While there are reasons to be coy on the Aussie Dollar's upside potential, there is a distinct feeling that any weakness might ultimately prove to be short-lived: the currency remains in a multi-week recovery sequence, largely thanks to an overarching theme of economic recovery from the covid-19 crisis.

"The fact that AUD can rally despite these increasing trade tensions would tend to confirm the idea floating around the market recently that 'the virus this year is what trade tensions were last year.' New cases have averaged 14 a day in Australia over the last week, and have even hit single-digits twice. That’s apparently more important nowadays," says Gittler.

Gittler says foreign exchange markets will likely judge currencies on how successful countries are in emerging from lockdown.

It is also noted that Australia, Canada and New Zealand have put in place significant programmes to support their economies in the G10 and their economies are therefore likely to recover the fastest.

"That should boost their currencies," says Gittler.